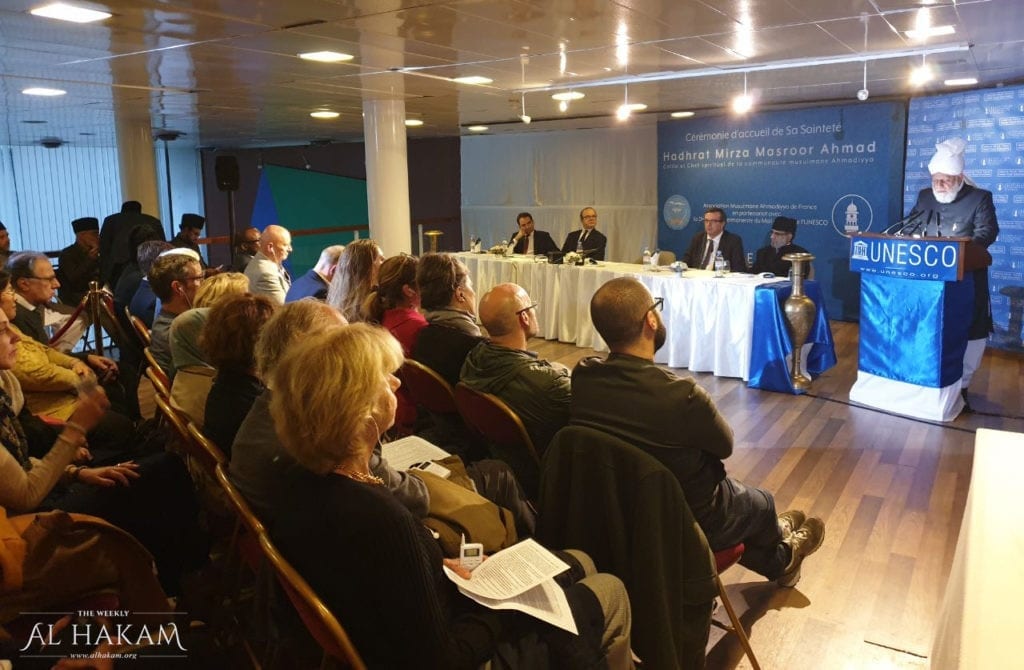 At approximately 6:15 local time a special session by UNESCO commenced in Miollis, Paris with the arrival of Hazrat Amirul Momineen(aba).

UNESCO, with 193 member-countries, is a body of the United Nations that

“seeks to build peace through international cooperation in Education, the Sciences and Culture.”

UNESCO’s constitution, signed on 16 November 1945, envisions to establish peace “upon dialogue and mutual understanding”, and “upon the intellectual and moral solidarity of humanity.” UNESCO globally carries out a large number of charitable, humanitarian and intellectual projects.

With Huzoor’s(aba) arrival, the session started with a series of speeches from UNESCO officials and other dignitaries, followed by an introduction to Jamaat-e-Ahmadiyya by Asif Arif Sahib.

The speakers expressed their admiration of the peaceful aspirations and works of the Ahmadiyya Muslim Jamaat.

“a person who is neither a politician, nor a political leader, nor a scientist, but the head of a religious community…”

Huzoor(aba) said that the founding objectives of UNESCO being peace, respect, human rights, education, freedom of expression and alleviating poverty are all

Hazrat Amirul Momineen(aba) expressed that the guests may be surprised to hear that these are also the objectives of Islam.

“Such service is based on the very first chapter of the Holy Quran which states that Allah the All Mighty is the Lord of all the worlds”.

Huzoor(aba) explained that this verse is a reminder for Muslims that Allah is the Lord of all humankind,

“irrespective of cast, creed and colour.”

Huzoor(aba) said that Islam teaches that

“the values of mutual respect and tolerance must be firmly embedded within society”.

Allah is the Provider and Sustainer to all people, even though they may reject him.

“His grace and mercy remain even with those who continually speak ill of Him”,

The philosophy of punishment or sanction established by God, in Islam, is geared more towards the hereafter. In this life, Allah continues to manifest his grace and mercy and has instructed mankind also to show compassion and sympathy to one another. 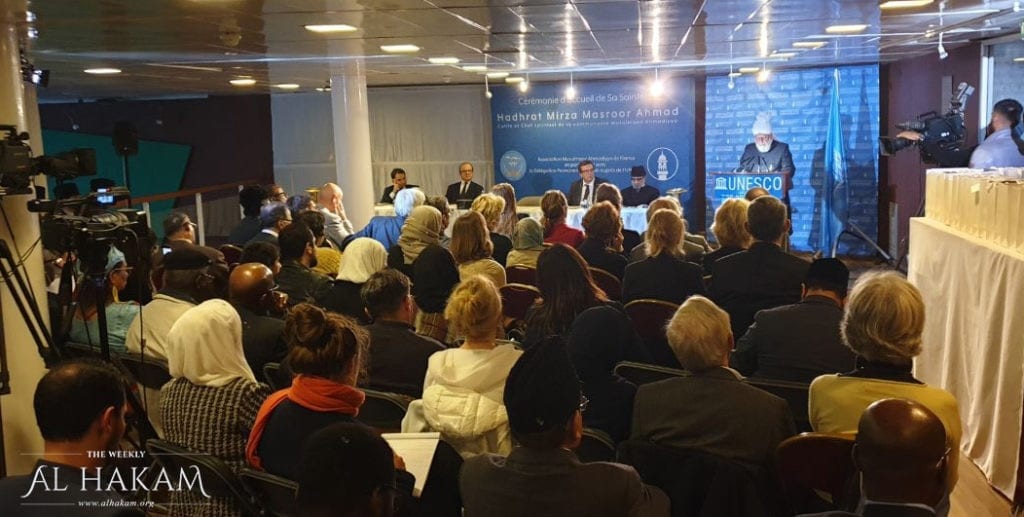 “it is a religious obligation on Muslims to fulfil the requirements of other people, irrespective of religion, culture or ethnicity and to always be kind” to “the emotions and needs of others”.

Huzoor(aba) explained how the Holy Prophet(sa) was the best of all creation but yet, had to endure great hardships. After migration to Medina, the Holy Prophet(sa) was elected as Head of the State and “under his leadership, the covenant proved to be a magnificent charter of human rights and governance, ensuring peace between the different communities”.

“the Prophet of Islam established an excellent education system through which the intellectual standards of that society were raised”.

Educated people were instructed to teach the illiterate.

“This was all done so that the weak and powerless could stand on their own two feet and advance”.

Huzoor(aba) mentioned that the Holy Prophet(sa) established a code of business and financial ethics.

“In an age when slavery was rampant and slave owners treated their slaves mercilessly, the Prophet of Islam sought to bring about a revolution in society.”

Slave owners were urged by the Holy Prophet(sa) to treat their slaves with compassion and respect and to ultimately free them.

The roads of the city were expanded and improved. A city-cleaning programme was also implemented by the Holy Prophet(sa) and the population was taught about the importance of hygiene and health.

“For the very first time amongst the Arabs, an orderly and civilised society was established”,

resulting in citizens becoming beneficial and active members of society.

“championing the rights of all people.”

“a timeless charter of human rights.”

The Prophet(sa) of Islam taught to respect the beliefs and feelings of others.

Huzoor(aba) said that it was regrettable that, in the modern world, respect has been sacrificed in the name of so-called freedom and entertainment.

“The founders of religion are no longer spared mockery and contempt”

The Holy Quran, however, says that Muslims should not even speak ill of the idols of others, as they, in return, may speak ill of Allah the Almighty, hence disrupting the peace of society.

The Holy Prophet(sa) of Islam established various schemes to raise the standard of living of the weak and underprivileged. He said that

“a poor person who was moral and considerate had far greater value than a rich person who cared not for the feelings of others”.

The Prophet of Islam(sa) continually told his followers to free slaves, or, if it was not possible, to at least feed and clothe them the same way that they fed and clothed themselves.

Hazrat Amirul Momineen(aba) then spoke of the rights of women in Islam. Huzoor(aba) said that it is often alleged that Islam denies women’s rights, but

“nothing could be further from the truth”.

In a time when women were not respected, the Holy Prophet(sa) instructed his followers to ensure girls were educated and respected. He said that a person who educated and guided three daughters in the best way, would be sure to enter paradise.

The way to enter heaven, according to the Prophet(sa) of Islam was to educate and instill moral values within female members of the society. In light of this, Ahmadi Muslim girls are educating themselves in order to serve Humanity.

“We ensure that girls are given equal access to education as boys. Hence, the literacy rate of Ahmadi Muslim girls in the developing world is at least 99 percent”,

Islam was the first to give women the right of inheritance, divorce and many other human rights.

Hazrat Amirul Momineen(aba) said that it is often alleged that Islam is a religion of violence. This is far from the truth as the Holy Quran gives freedom of belief and conscience.

“In reality if the early Muslims engaged in warfare, it was always defensive and fought for the sake of establishing long-term peace and to protect the right of all people to live with freedom”,

Any Muslim who adopts violence is far from Islamic teachings. Such acts of violence only aim at gaining power or wealth and for attaining geopolitical and vested benefits.

“at all times sought peace and reconciliation”.

Another allegation against Islam is of being a backward and archaic religion or one that does not promote intellectual advancement. Huzoor(aba) said that such an assumption is based on merely on fiction rather than facts.

“It is a baseless allegation. The Holy Quran itself has signified the importance of education by teaching the prayer, ‘O my Lord increase me in knowledge’”.

Huzoor(aba) said that where this prayer helps Muslims it also inspires them to advance in knowledge. The truth is that the Holy Quran and the Prophet of Islam inspired generations of Muslim scientists, inventors and philosophers who transformed the world.

Huzoor(aba) drew the audience’s attention to Ibn Haytham, who was also recognised by UNESCO as the pioneer of modern optics. Huzoor(aba) said that the word camera originates from Arabic. In the 12(th) Century a Muslim cartographer developed

“the most extensive and accurate world map of the medieval times that was used by centuries of travellers.”

Hazrat Amirul Momineen(aba) also spoke of the great contributions of Muslims physicians towards medical and biological sciences. For instance, Jabir Ibn Hayan bought a revolution in the field of Chemistry and invented many of the basic processes that are still in use today.

Huzoor(aba) also pointed towards Algebra as a discipline that a Muslim mathematician invented.

Hazrat Amirul Momineen(aba) then referred to a New York Times article that stated,

“Muslims created a society that was, in the middle ages, the scientific centre of the world”.

“Hence, from the outset, Islam emphasised the immense value of learning and pushing the boundaries of human knowledge”,

The Ahmadiyya Muslim Community has been promoting such trends learning and education since its inception. The very first Muslim scientist to receive a Nobel Prize was Professor Dr Abdus Salam, an Ahmadi, who said that there were

“around 750 verses in the Holy Quran directly related to science and which enhanced our understanding of nature and the universe”.

As a result, he started a tradition within the Jamaat of awarding gold medals to those who achieve academic excellence.

Huzoor(aba) said that education is the key to breaking poverty and this is why the Holy Prophet(sa) urged Muslims to fund the poor in education.

Huzoor(aba) explained that Muslims are required to achieve the love of God not only through worship, but by serving humanity also.

“We believe that Islam is a religion of love and compassion”,

Huzoor(aba) said. That is why the Jamaat serves humanity irrespective of cast or creed.

The Jamaat is providing clean running water in African villages, this enables children to focus on their education rather than travelling miles to collect water from ponds. Huzoor(aba) spoke in further detail of the humanitarian works of the Jamaat that were done out of human sympathy.

At the end, Huzoor(aba) prayed that mankind forsakes greed and forgoes the pursuit of narrow self-interest and focuses on alleviating the pain of the less fortunate.

Hazrat Amirul Momineen(aba) thanked those who came to the event and concluded the session with silent prayers.