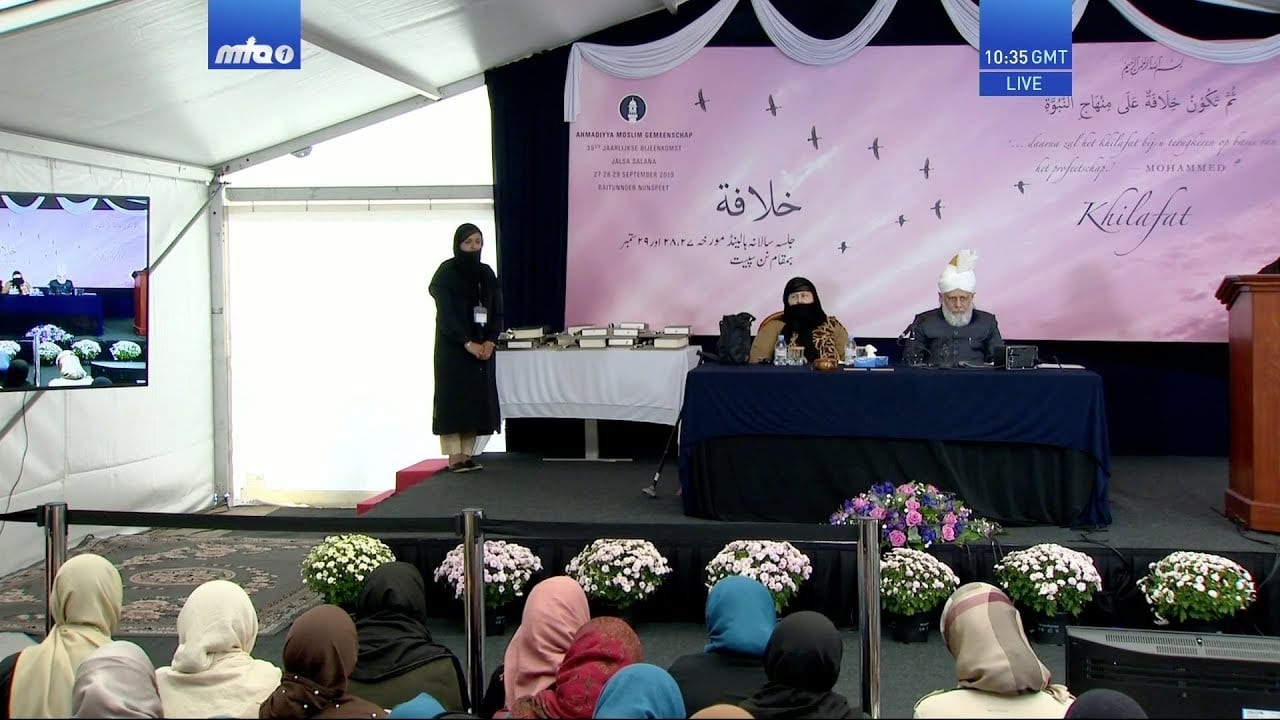 Nunspeet, the Netherlands, Saturday, 28 September: Hazrat Khalifatul Masih V, may Allah be his Helper, graced the ladies’ Jalsa Gah on the second day of Jalsa Salana Holland at 10:32 GMT.

The Lajna session started with the recitation of the Holy Quran from chapter 25, verses 62 to 68. The Urdu translation of the verses were then read out. These verses speak of the creation of the heavens and the earth as a great blessing of God.

Next, an Urdu poem written by the Promised Messiah, peace be upon him, was read out by Sobia Leghari Sahiba. The poem highlighted the esteemed personage of the Holy Prophet, peace and blessings of Allah be upon him.

Hazrat Amirul Momineen(aba) then presented awards of academic excellence to 20 Lajna members. These included 9 from the Netherlands and 11 from other countries.

Thereafter, Huzoor(aba) addressed the congregation. After Tashahud, Ta‘awuz and the recitation of Surah al-Fatihah, Hazrat Amirul Momineen(aba) stated that of the new inventions of our age, a very good invention was the large television screen that was present in both the men’s ladies’ side of Jalsa Salana.

Hazrat Amirul Momineen(aba) said that everything that he says at the men’s side is also for the ladies. In a similar vein, commandments of the Quran are for both men and women.

Another benefit of delivering a direct address to the Lajna is that mothers have a huge role in bringing up the future generations. Thus, the impact of an address will have more of an effect if it is done live.

Huzoor(aba) said that the reason he was giving such an introduction was so that ladies listen to what he says and also act upon it. It should not be that they listen, go home, and forget whatever was said.

The teachings of the Holy Quran, the Holy Prophet(sa), the Promised Messiah(as) and the Khulafa are never outdated, rather they manifest in new ways for every age and are a means to draw closer to Allah.

Hazrat Amirul Momineen(aba) reminded men that if they acted upon what he said, then most of the women would follow them. In this manner, the reformation of the Jamaat can take place.

Huzoor(aba) highlighted the fact that most of the Ahmadis living in the Netherlands, are those who migrated from Pakistan due to lack of religious freedom. The governments here granted asylum to Ahmadis and enabled them practice their religion freely.

Ahmadi Muslims should be grateful to the country and work hard to benefit it. Huzoor(aba) said that the greatest benefit we can give to the country is to present the beautiful teachings of Islam to them.

It is wrong to think that women are not given an opportunity for tabligh. Such programmes (tabligh) should be made.

Huzoor(aba) said that as permission was granted to stay in this country due to religious reason, every man and woman should reform themselves spiritually.

Next, Hazrat Amirul Momineen(aba) said that he would present teachings of the Promised Messiah(as) that he gave to his followers.

The reason we accepted the Promised Messiah(as) was because Allah told us to. He was to come as the second advent of Jesus(as) and would bring the second manifestation of the true Islam. Thus, accepting the Premised Messiah(as) and following his teachings is no ordinary matter, rather it is the true Islam. We should all listen to what he said and act on it. If we do not, then our claim of Bai’at is void.

We should be greatly concerned over the fact that we came here due to religious reasons. Now, after migrating, if we forget our purpose and what our faith requires from us, then we are at a loss. We vowed, through Bai’at, to self-reform and draw closer to Allah, however if we now forget this and turn towards worldliness then we are at loss.

The Promised Messiah(as) constantly reminded his Jamaat to carry out istighfar and remember the afterlife. True life is life after death. When we realise this, we will not give all our attention towards the world.

Huzoor(aba) said that women sometimes unduly demand better jewelry and clothes when they are not even able to afford them. If one wants to compete, then it should be in the field of spirituality and reformation. If one sees that someone else’s child is good in religion, they should pray for their children to be good as well.

The Promised Messiah(as) once said that it is God who forgives man when man comes towards Him seeking forgiveness. Before every act, one should think whether God will be pleased or become angry. The best way to come closer to Allah is through Namaz. Thus, one should perform Namaz and pray. The Promised Messiah(as) said that one should perform Namaz in the best manner. When one stands, bows and prostrates, it should reflect the true spirit of humility and worship.

Allah has said that women should also become true worshippers. As a result, they will bring up children who are religious and spiritual. In fact, Huzoor(aba) said, women often have a spiritual effect upon their husbands as well. Girls observe their mothers. If mothers present a good example then we will have worshipping children.

Another element that the Promised Messiah(as) paid great attention towards is reading the Holy Quran and acting upon its teachings. If those women read the Holy Quran who do not pay due attention to purdah, then they will automatically fix their own purdah. The culture of wearing tight clothes in such a manner that one’s figure is exposed will finish after acting upon the teachings of the Holy Quran. Huzoor(aba) said that those women who have come from Pakistan should at least uphold the standard of purdah they had in Pakistan.

Every person should self-reflect and ask themselves whether their worship, remembrance of Allah and morals are up to the mark.

The Promised Messiah(as) said that he did not want mere verbal proclamations of faith, rather action is required. He said that if a member of his Jamaat does not act, then they are testifying that a messiah was never needed. Such a person should not count themselves as an Ahmadi Muslim. If one calls himself an Ahmadi, they should fulfil the aims an objectives of being an Ahmadi.

The Promised Messiah(as) said that the Jamaat who wants to be known as a divine Jamaat cannot prove themselves unless they show good actions. He said that a Jamaat cannot live without action.

How can one ever say that their children are ready to sacrifice anything for faith, if one does not act themselves?

Huzoor(aba) said that the community of the Promised Messiah(as) will continue to prosper but those among us who do not act upon his teachings will be cut off like a dry branch.

Taqwa (righteousness) is vital and Taqwa is that one acts upon every good moral, not just a few. Belief and faith is born from righteousness and it is righteousness that enables faith to flourish. If one is not righteous, they will stumble and fall.

When man strives to adopt all good acts and morals, then Allah listens to prayers and draws the believer closer to Himself.

The Promised Messiah(as) said that the true purpose of the Holy Quran is to establish righteous.

Huzoor(aba) said that special focus and attention is needed to establish righteousness in the Western countries that promote ill in the name of so-called “freedom”.

Hazrat Amirul Momineen(aba) prayed that Allah may enable everyone to establish true righteousness and gain the blessings of Allah.

The session ended with silent prayer led by Huzoor(aba) and choral poems recited by groups of Lajna and Nasirat.