“May justice and compassion prevail” 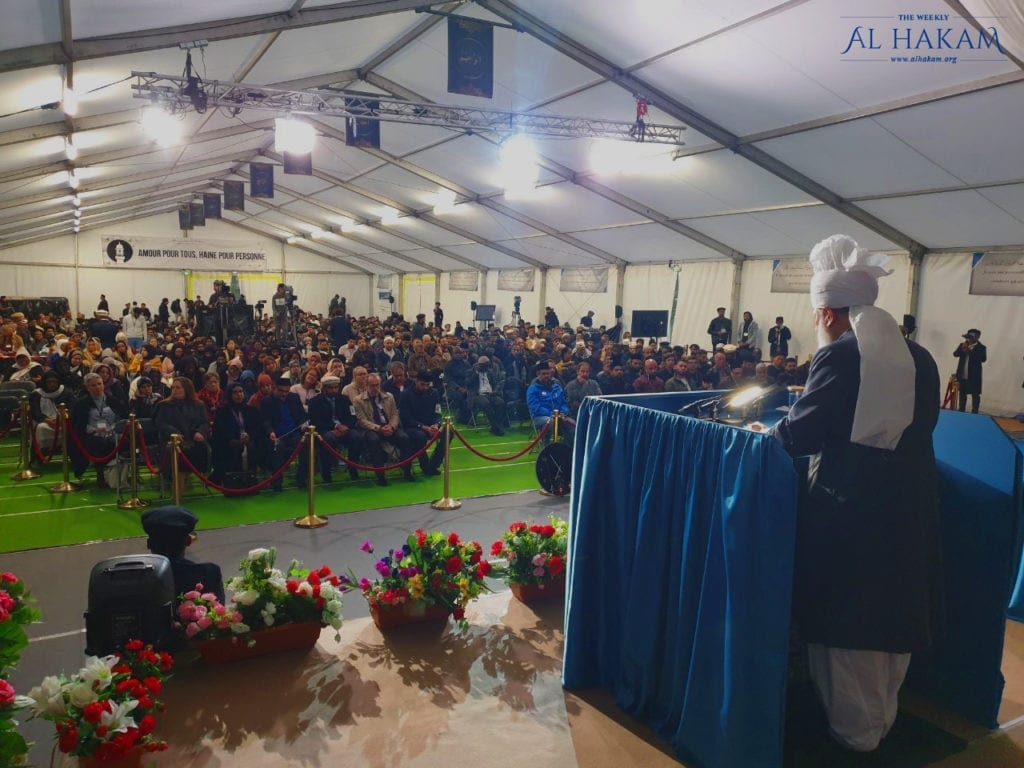 The session started with the recitation of the Holy Quran by Sebastian Ataul Hayye Sahib who recited verse 14 of Surah al-Hujurat (chapter 49). He also presented the French translation of the verse.

A brief introduction to the Jamaat was presented to the non-Ahmadi guests present. After, the Mayor of Trie-Chateau, David Didier addressed the Jalsa in which he said he was honoured to receive Hazrat Khlaifatul Masih V(aba) in the little town of Trie-Chateau.

The next speaker was Dr Agnes De Foe, a Sociologist, who spoke before the Jalsa. Her brief speech encapsulated her interacting with Jamaat-e-Ahmadiyya and spoke highly of the message of peace that Hazrat Amirul Momineen(aba) is promoting.

Dr Katrin Langewiesche, an Anthropologist, spoke of her interacting with the Jamaat in Burkina Faso when the Jamaat was carrying out some charitable works. She also took the opportunity to present her book to Huzoor(aba),that includes a chapter on Islam Ahmadiyyat.

Huzoor(aba) then condemned the atrocities and violent attacks that have also taken place in France by so-called Muslim extremists. Hazrat Amirul Momineen(aba) highlighted that Islam is a religion of peace and tolerance. “A true Muslim is a person who himself is a peaceful person” Huzoor(aba) explained. 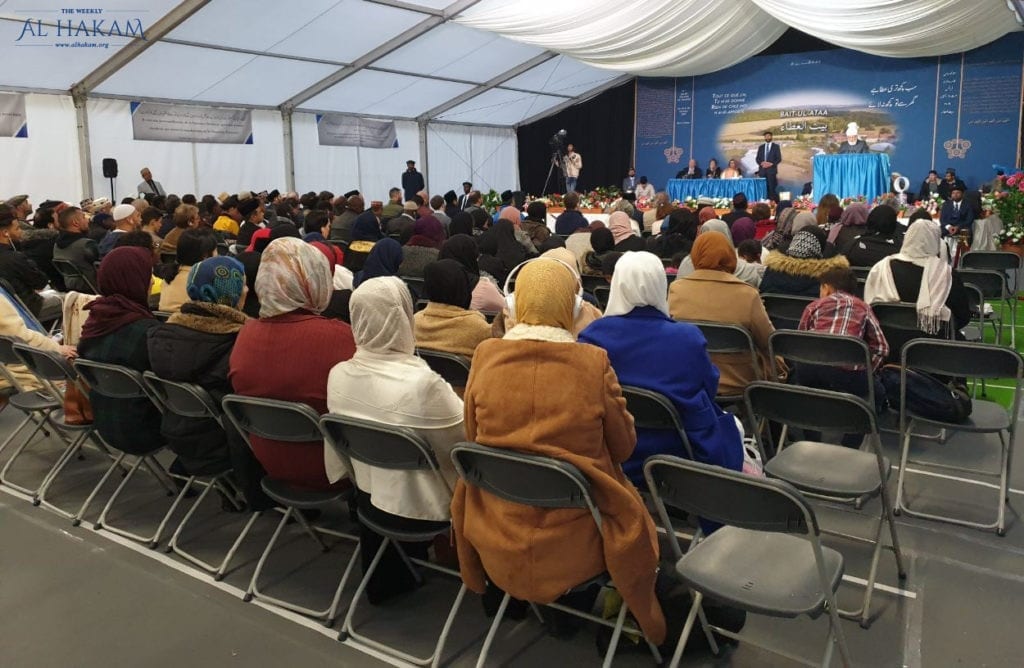 The Islamic greeting itself portrays how Islam is a religion of peace. Even non-Muslims use this greeting. Thus, it cannot be that Islam teaches to meet others with peace and security and on the other hand, promotes hate and extremism.

“All forms of extremism and violence are completely against Islamic teachings”,

In order to truly understand the teachings of Islam, one must study the life of its Holy Founder, peace be upon him.

The Holy Prophet(sa) and his companions endured this relentless pain and then migrated out of their city to escape this agony. However, the enemies of Islam continued to pursue them and cause pain to Muslims. Finally, Allah gave permission to fight in defence to safeguard religion.

“Hence, when the Holy Prophet(sa) and his followers were forced to partake in wars and battles, it was for the sake of defending the rights of all people”

including people of other faiths, Hazrat Amirul Momineen(aba) explained.

If Islam wanted to spread its teachings with force, then why would the Holy Quran explicitly state that it was the duty of Muslims to safeguard all people and their rights? Hazrat Amirul Momineen(aba) exampled that early Muslims gave their life to uphold and establish the principles of

Huzoor(aba) said. They were able to practice their religion and customs without the fear of sanctions or persecution. The Holy Prophet(sa) never deviated from this covenant.

Islam has never permitted its followers to spread their faith “through the use of force”. The treaty of Medina enabled all people to practice their beliefs and traditions and were duty bound to be loyal citizens of the state and to refrain from all activities that would undermine the peace of the city.

Keeping these aspects in mind, it is not accurate to attribute the deeds of a minority of Muslims who commit atrocities to the religion of Islam. Huzoor(aba) said that

“from cover to cover”

“every opportunity for attaining peace in the world.”

Allah the Almighty instructed the Holy Prophet(sa) to convey the message of Islam and thereafter leave the matter to Allah.

The Holy Quran never once advocated violence or force against those who shunned its teachings, rather

“it called on Muslims to exhibit tolerance and patience”

“Islam’s teachings are categorical that violent conquest or forceful conversion are strictly prohibited”.

Any act or conduct that is detrimental to the peace of society is forbidden in Islam.

Consequently, terrorists who commit suicide bombings, attack night clubs etc. are all guilty of violating the teachings of Islam.

The Holy Quran has also given guiding principles of day-to-day life that promote peace. For example chapter 2 verse 189 of the Holy Quran promotes fair trade and upholding the integrity of all transactions. Allah instructs Muslims to acquire wealth in an honest and truthful manner, not being unjust.

Chapter 83 verses 2-4, the Holy Quran condemns those who are exploitative in business transactions, try to short-change others while demanding more than their due, in return. Such people are cursed and will be disgraced.

The Holy Quran has given guidance for internal conflicts as well. The Islamic focus is always in establishing sustainable peace. Hazrat Amirul Momineen(aba) referred to chapter 49, verse 10 of the Holy Quran that details how two conflicting parties or nations should be dealt with, in a just and peaceful manner. Huzoor(aba) said that the verse captures a means of lasting peace, if acted on.

However, regrettably, many Muslim nations fail to act upon this Quranic injunction.

Today, we observe that cruelty and injustices are perpetrated by dominant powers in the name of upholding peace. Such instability is beneficial to none, except terrorists.

Huzoor(aba) said that in both east and the west,

“The blue skies of peace and prosperity have given way to heavy clouds of war and injustice”.

Nations are being torn apart across the world. Until and unless international relations are based upon justice and integrity and fulfilling the rights of others, peace cannot be established.

Hazrat Amirul Momineen(aba) said that he can only pray that mankind does not repeat the mistakes of the past.

If we look back to the period after the First World War, the League of Nations failed miserably in its task to maintain peace. This was because

“justice and fairness did not prevail”.

As a result, the most deadly war (WWII), in the history of mankind, erupted.

Hazrat Amirul Momineen(aba) explained how modern warfare would be the most deadly – due to nuclear arms. A war would ensure

“the most horrific and devastating legacy”

of our children. Huzoor(aba) then painted a picture of what the consequences of a nuclear war would bring.

If the lack of peace continues to be attributed towards the

If Muslim countries or terrorist groups continue to perpetrate atrocities in the name of Islam then it is only for their vested interests, it is not Islam.

“Today’s conflicts and wars have nothing to do with religion, rather they are all about attaining wealth, power and geopolitical dominance”,

“Let it be, that our future generations come to remember us with love and affection rather than hate and resentment”,

Hazrat Amirul Momineen(aba) ended his speech by once again thanking the guests for attending.

Huzoor(aba) then led the congregation in silent prayer. 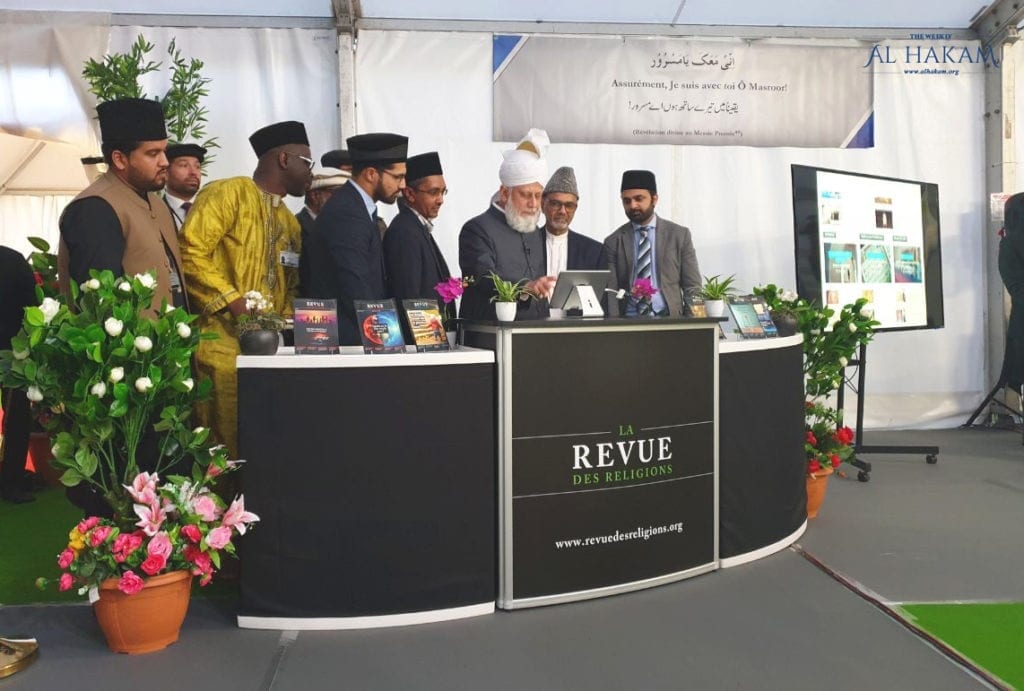