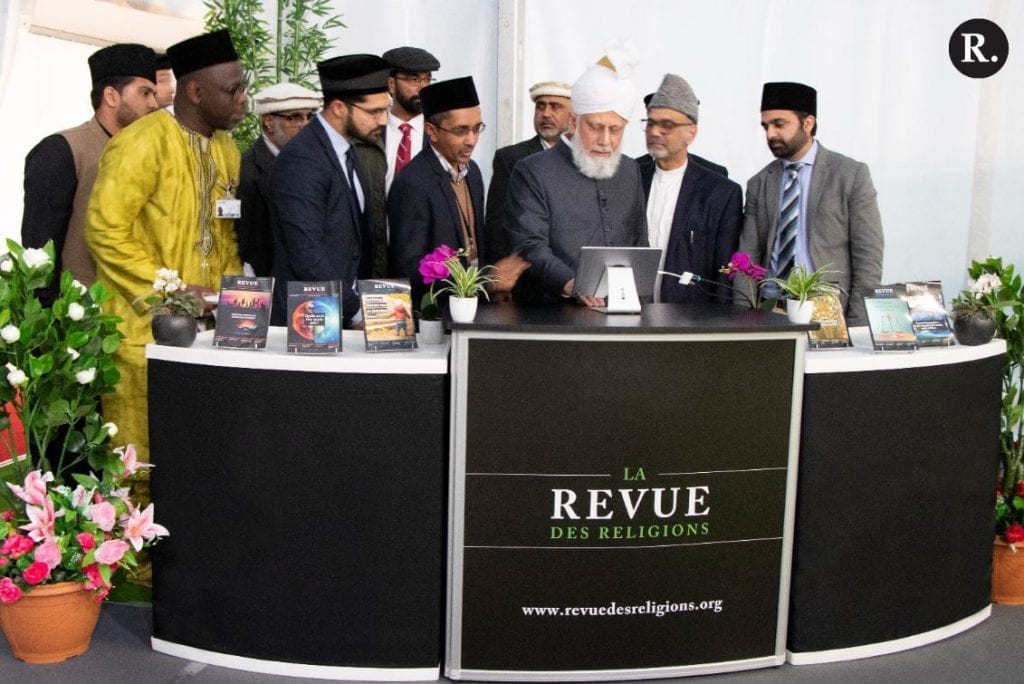 In 1902 Hazrat Mirza Ghulam Ahmad, the Promised Messiah and Imam Mahdi, established The Review of Religions in English. Its purpose was to demonstrate to the world, through presenting rational arguments and spiritual experiences that God exists. It was formed as a medium to present the true teachings of Islam in the form of Ahmadiyyat to the non-Muslim world. Some articles comparing other religions are also a feature. At the outset the Promised Messiah would pen articles himself for the magazine, which would be translated from Urdu to English. As a result of Hazrat Ahmad’s personal involvement, the magazine quickly gained widespread acclaim, earning praise from many notable personalities of the time. Leo Tolstoy, who the The Guardian says ‘is widely considered in the West to be the greatest writer of all time,’ was sent copies of The Review of Religions along with a letter by Mufti Muhammad Sadiq (ra), a companion of Hazrat Mirza Ghulam Ahmad (as). Tolstoy replied :

‘To Mufti Muhammad Sadiq Sahib, Dear friend! Your letter along with Mirza Ghulam Ahmad’s picture and a sample of the magazine The Review of Religions has been received. To engage in the proof of the death of Christ or in the investigation of his tomb, is a futile effort because an intelligent man can never believe that Jesus is still alive…. We need reasoned religious teaching and if Mr Mirza presents a new reasonable proposition then I am ready to benefit from it. In The Review of Religions specimen number, I approved very much two articles, ‘How to get rid of the Bondage of Sin’ and ‘The Life to Come’, especially the second. The idea is very profound and very true. I am most thankful to you for sending me this and am also grateful for your letter. Yours Sincerely, Tolstoy, from Russia. 5th June 1903.’

For 117 years The Review of Religions has been a source of invaluable research and knowledge. Today, the magazine, under the guidance of the 5th Caliph of the Ahmadiyya Muslim Community, Hazrat Mirza Masroor Ahmad (aba), has reached new heights. It has become a multi-platform media organisation encompassing print, online, social media, YouTube and exhibitions reaching a large audience worldwide. In the last few years The Review of Religions has started new language editions in French, German and Spanish.

The 5th Caliph inaugurated the new website of the French Edition at the Jalsa Salana France (Annual Convention) on Saturday 5th October 2019 which was broadcast live on MTA (Muslim Television Ahmadiyya International). Immediately after his address to non-Ahmadi guests, His Holiness walked to the area which had been organised for the launch, where he pressed the button on an iPad to officially inaugurate the French website. His Holiness scrolled through the website to glance over the content. After, His Holiness was offered a plate of French macarons, a sweet typical of France, by Dr Idriss Kone. Originally from Ivory Coast, Dr Kone is a radiologist and is a team member of the French The Review of Religions. Dr. Kone told me ‘I was so nervous that initially I forgot to offer the plate. When finally I did, I completely forgot what to say. His Holiness was trying to take one of the sweets and due to nerves, I kept accidentally slightly pulling the plate away. I was in a different world. So His Holiness laughed and lovingly accepted not just one sweet, but the entire plate of sweets which he took back with him!’

I spoke to the Manager of the French Edition, Ata-Ul-Qayoom Joomun about the launch. Joomun is originally from Mauritius and has been heavily involved in translating literature for the Ahmadiyya Muslim Community into French. Joomun told me:

‘The francophone countries direly needed a magazine presenting the true nature of Islam and its relevance in today’s world. The French edition of The Review of Religions has filled this gap. For the past two years the print version has helped to dispel misconceptions held about Islam, especially in Africa, where we have a large readership. The French website of The Review is yet another tool which will complement the print version and bring the message of true Islam to yet more people. Now readers and researchers will be able to access all past articles and new ones at their fingertip.’

Talha Rashid was born in France and lives in Lille. He has a PhD in molecular and cellular biology and currently serves as the Chief Editor of the French Edition of The Review of Religions. Speaking to me about the launch Rashid said to me:

‘It was a great pleasure and immense honour that the website of the French Edition of The Review of Religions has been launched by His Holiness on this blessed occasion of the Jalsa Salana of France. The print edition exists since 2017 and now this website gives a great boost to its visibility allowing everyone to access all of its content via their phones or iPad. We will also be able to widely share the content of La Revue des Religions on social networks and thus bring it to as many people as possible. This launch by the Caliph in person demonstrates how involved he is with the teams of The Review of Religions. He is a source of blessings, valuable advice and great motivation for all members of the French team.’

Munir-Ud-Din Shams is the Chairman of The Review of Religions and in addition also serves as Managing Director of Muslim Television Ahmadiyya International (MTA), the Ahmadiyya Muslim Community’s official TV station and is also the Director of Publications for the Ahmadiyya Community, overseeing the translation of all literature. He told me after the launch:

‘The Fourth Worldwide Head of the Ahmadiyya Muslim Community, Hazrat Mirza Tahir Ahmad (rh), gaining knowledge from God the Almighty said that God Willing Islam would spread in the francophone countries rapidly. The current and Fifth Worldwide Head of the Ahmadiyya Muslim Community, Hazrat Mirza Masroor Ahmad (aba) has similarly been emphasising the importance of conveying the true message of Islam to francophone countries. This is why His Holiness has directed MTA International to increase the number of French programmes especially for MTA Africa. The Promised Messiah, Hazrat Mirza Ghulam Ahmad (as), was sent by God Almighty as a true servant of the Holy Prophet Muhammad (Sa), for the entire world and all nations. This is why we strive to convey the message of Islam Ahmadiyyat to every country of the world. The Ahmadiyya Muslim Community publishes literature in all languages and most importantly, we have translated the Holy Quran into 75 languages of the world. It gives me great pleasure and happiness that the under the guidance of the Caliph, the magazine which was started by the Promised Messiah (as) is prospering and now is published in different languages such as German and Spanish. Now francophone countries will benefit from the official website of The Review of Religions.’

We hope and pray that through the blessings of the launch by the Caliph, this new website for the French The Review of Religions will be a huge success for the francophone countries.