Strasbourg mosque: A beacon of peace

Strasbourg, France, Saturday, 12 October: The Mahdi Mosque was inaugurated yesterday with the Friday Sermon of Hazrat Mirza Masroor Ahmad, Khalifatul Masih V(aba), in Strasbourg, France. Earlier this afternoon, an inaugural reception was held in the premises of the mosque where Hazrat Amirul Momineen(aba) addressed dignitaries, local residents and guests.

After Hazrat Amirul Momineen’s(aba) arrival, the session started with the recitation of the Holy Quran, verses 11, 12 and 14 of Surah al-Hujurat (chapter 49).

Ashfaq Rabbani Sahib, Amir Jamaat-e-Ahmadiyya France then introduced the Jamaat and welcomed the guests. An introduction to Islam Ahmadiyyat and the Promised Messiah, peace be upon him, was given.

A number of dignitaries that addressed the gathering included Jean Jacques Rusch the Mayor of Hurtigheim, Martine Wonner Member of Parliament for Hurtigheim, Justin Vogel Mayor of Truchtersheim, and President of the Kochesberg Municipality, Étienne Burger, Vice-president of the county council and mayor of Khuttolsheim. 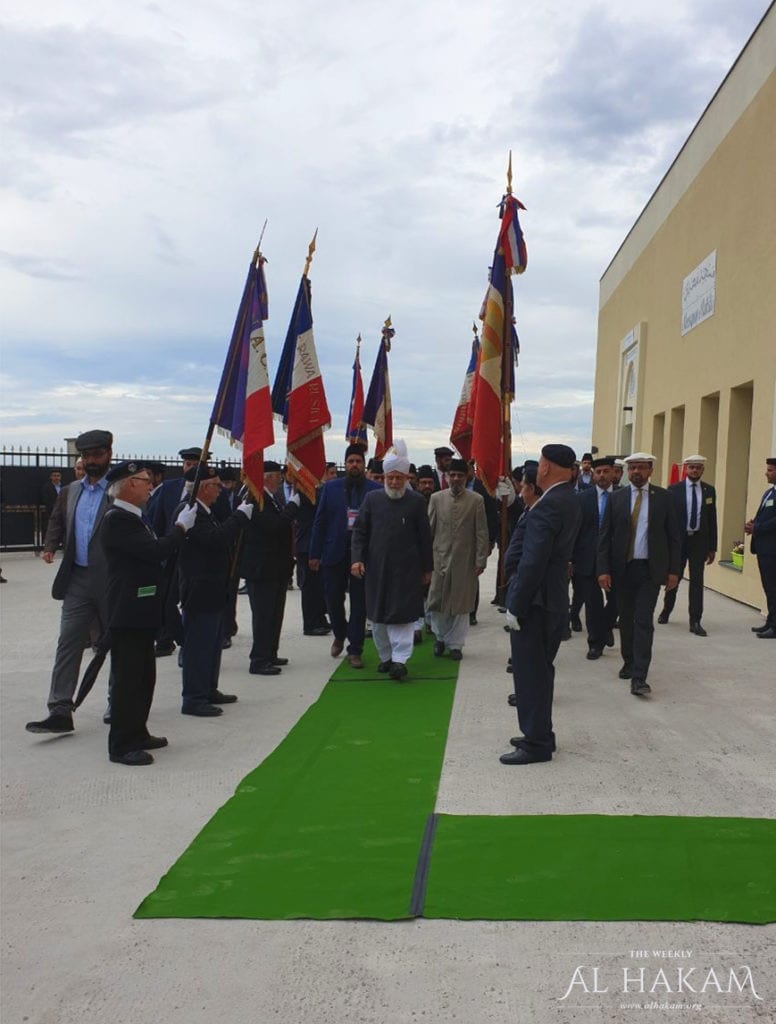 The speakers welcomed the Jamaat’s initiative of building the mosque, appreciating freedom of religion in France. They spoke on various areas of the French society and praised the Jamaat’s motto of “love for all hatred for none” and how it fitted in. Justin Vogel, Mayor of Truchtersheim, expressed her understanding of Islam as a religion of peace and the Holy Quran as a book that promotes peace. She also desired for the Mahdi Mosque, Strasbourg to be a means of spreading peace and love.

After reciting the Tashahud and Ta‘awuz Hazrat Khalifatul Masih V(aba) greeted and thanked the guests for attending a function of religious nature with a mosque was being opened.

Huzoor(aba), commenting on the speeches of the respected guests, said it seemed there were some reservations at the start of the mosque project. This was quite natural due to the general but widespread misconception that a mosque represents unrest and violence. Huzoor(aba) made it clear that this was absolutely wrong and far from the truth.

Huzoor(aba) described how Muslim men and women, at the dawn of Islam, were severely persecuted in Mecca. As a result the Holy Prophet, along with his community, migrated to Medina. However, the Meccans followed them and continued their persecution. It was then that Allah permitted to fight in self-defence. Those who opposed and persecuted Islam and its followers were actually against religion altogether. The Holy Quran actually mentions that Churches, Synagogues, and other places of worship would not exist if these people were not apprehended.

Hazrat Amirul Momineen(aba) stated that this was the first Quranic commandment for Muslims to defend themselves and their religion.

Whenever a Muslim army would leave for wars that they were forced to participate in, due to the actions of enemies, the Holy Prophet(sa) and his Rightly Guided Caliphs(ra) would order the Muslim army not to kill religious leaders, destroy places of worships or kill women and children.

A western commentator has written that only a few hundred or a thousand were killed in the battles of the Holy Prophet(sa), whereas World War I and World War II (that the western world fought) saw the death of hundreds of thousands, with a single bomb. Thus, he said, the blame is not on Muslims in waging wars and causing bloodshed. The two great wars had nothing to do with Islam and were actually geopolitical wars.

“Islam is most definitely not a religion of extremism”,

Hazrat Amirul Momineen(aba) pointed out that some locals may fear this new mosque, but Islam defines many rights of neighbours; neighbourhood spanning to 40 houses and not just to next doors. The rights of neighbours prescribed by Allah are such that the Holy Prophet(sa), who received these commandments directly, thought that neighbours might be given a right in a Muslim’s inheritance.

“A mosque is built to worship the One God and worshippers to live in peace together”,

Highlighting the peaceable and humanitarian teachings and practices of Islam, Huzoor(aba) mentioned how the Jamaat has built many mosques by the grace of Allah, and at the same time, is also rendering extensive humanitarian services. There are hundreds of schools and hospitals of the Jamaat built in Africa and amenities like water and electricity are also provided to remote areas.

Huzoor(aba) said that this is how our claim of

“love for all hatred for none”

is supported by our actions.

Huzoor(aba) confirmed that those Ahmadi Muslims who will be attending the new mosque will be law abiding citizens. At the same time they will serve humanity. This is because the Holy Quran has clearly stated that worship alone and no compassion for humanity results to nought. The Jamaat upholds this standard wherever it goes.

Ahmadi Muslims, Insha-Allah, will develop their relations with the neighbours of this new mosque even more so. And those who enter the mosque will be a means of peace and comfort.

The French government was commended by Huzoor(aba) for allowing Jamaat members to come to France and live. Those Ahmadis who have come here are mostly those who were not given freedom of religion and conscience. Now that Ahmadi Muslims have come here, they have the responsibility of serving this country; this would be true gratitude. Allah desires every believer to be thankful and the Holy Prophet(sa) has said that those who do not thank fellow-men, do not thank Allah.

Huzoor(aba) said that he was confident that local Ahmadis will be a means of peace and comfort for the area. The Ahmadis will be law abiding citizens who serve and will show the true teachings of Islam that the Holy Prophet(sa) taught.

The session ended with prayers.