This is true integration! 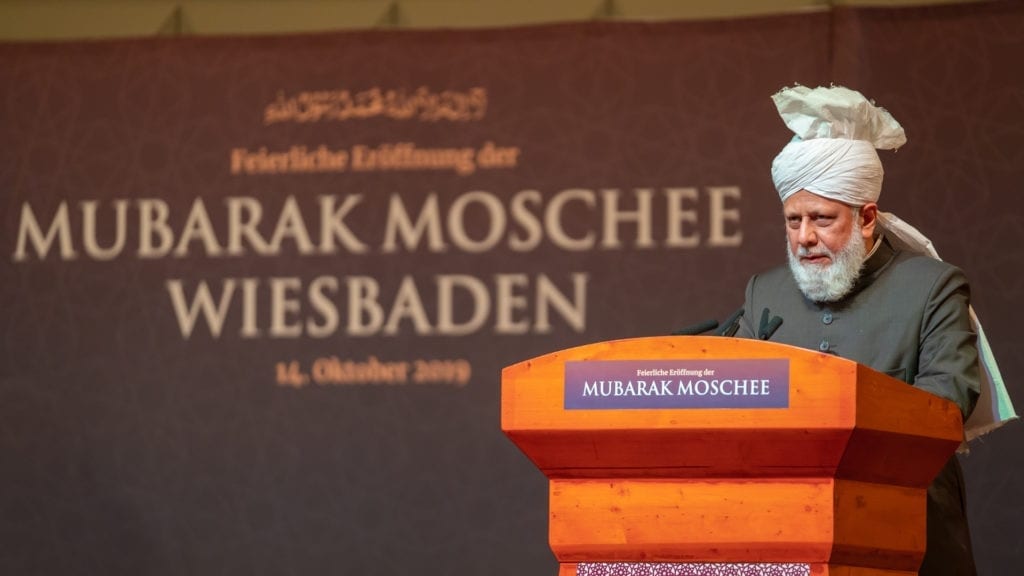 Following the arrival of Hazrat Amirul Momineen(aba), the session started with the recitation of the Holy Quran (chapter 2, verses 128 to 130) by Danial Daud Sahib. This was followed by the German translation of the verses by Nosheerwan Khan Sahib.

The Jamaat was facing great difficulty in establishing a mosque in Wiesbaden as no location could be found, however through the grace of Allah the Jamaat has been able to establish Mubarak mosque in the heart of Wiesbaden. Huzoor(aba) laid its foundation in 2014.

Next, Mr Christoph Manjura, Commissioner for Integration, Education Social welfare of Wiesbaden City expressed his memories of the foundation stone of Mubarak Mosque when Hazrat Amirul Momineen(aba) attended. Mr Manjura detailed the various efforts of Jamaat-e-Ahmadiyya in Wiesbaden and spoke on the need for religious and cultural diversity and integration. He also expressed his pleasure on how the Mubarak Mosque project was completed without any serious opposition from the wider public.

Mr Frank Thilo Becher, Member of the Provincial Parliament of Hessen then addressed the congregation. He started off by congratulating the Jamaat for the new mosque. He said that the new mosque will be a place where we will be able to have religious dialogue. Mr Becher commended the manner in which the Jamaat constructs mosques and how they are very open. He commended the partnership the Jamaat has with the province of Hessen in teaching Islamic studies at schools. Mr Becher prayed for peace and blessings for the whole Jamaat.

Next, Mr Gert-Uwe Mende, Oberburgermeister Lord Mayor spoke. He started by praising the mosque and its aesthetics. The Lord Mayor stated that it is a tradition to welcome the mosque with prayers of blessings. Mr Gert-Uwe Mende expressed how he was honoured to welcome the new mosque and desired the mosque to be a place where the populace of Wiesbaden can congregate, meet and have dialogue. The Mayor said that the Jamaat has played a great role in removing the fears people have with mosques and Islam in general. He commented on how easily all issues in the construction of the mosque were resolved and how smooth the process had been. He also prayed that the Jamaat is given good neighbours.

Thereafter, Hazrat Khalifatul Masih V, may Allah be his Helper, addressed the congregation. After reciting Tashahud and Ta‘awuz, Hazrat Amirul Momineen(aba) greeted the guests with the message of peace. Huzoor(aba) expressed his pleasure in seeing the residents of Wiesbaden as very open minded and welcoming people who attended such a purely religious function of the Jamaat.

Huzoor(aba) stated that sometimes people develop apprehensions regarding mosques. However, the true and sole purpose of a mosque is the worship of Allah. Some people, in the west and non-Muslim world, deliberate that mosques might harbour extremism. But the Holy Quran portrays the purpose of a mosque for the worship of the One God. And this worship should also fulfil the rights of humanity as well. For this reason, the Holy Quran has clearly declared that those who do not uphold the rights of humanity and do not serve the poor, their worship results in disgrace.

Muslims have been taught to pray for the peace of the whole world.

The Promised Messiah, peace be upon him, said that if one wants to introduce Islam, then there is no better way than building mosques. One would only introduce something if good qualities are presented. Therefore, a true Muslim’s mosque will show to the world that the worshippers are those who respect humanity at large.

Hazrat Amirul Momineen(aba) said that as there are more than 1000 Ahmadi Muslims in Wiesbaden, all residents of Wiesbaden are their neighbours and Islam has instructed Muslims to greatly uphold the rights of their neighbours.

Referring to the springs of Wiesbaden, Huzoor(aba) mentioned how around 80% of remote areas in Africa do not have access to water supplies. As a result, children walk miles on end throughout the day, to fetch water inadvertently compromising their education. The Jamaat installs water pumps in such areas and that this service is carried out without discrimination.

Huzoor(aba) explained that Islam was not a religion of violence and that Allah allowed Muslims to defend themselves and for protecting religion as a whole.

The Holy Prophet’s(sa) reaction to prisoners of war was such that those prisoners who taught other Muslims to read or write, would be freed. The Prophet(sa) of Islam did this so that education could spread and the ignorance of people diminish.

Huzoor(aba) explained that the Holy Prophet(sa) was part of a committee to serve the poor even before he claimed prophethood.

“Integration can be displayed when the sentiments of other’s is also taken care of,”

Hazrat Amirul Momineen(aba) explained that integration for local Ahmadis is “to apply all abilities to serve for the betterment of the city; through education and service of the nation. This is why the Jamaat encourages students to excel in science and education and serve their country better.

Huzoor(aba) said that Ahmadis owe gratitude to Germany for allowing them to settle here. To express their thankfulness, Ahmadi Muslims should work for the betterment of the country with all of one’s abilities. This will lead to true integration. If this is upheld, the Jamaat will always have a positive reputation.

Hazrat Amirul Momineen(aba) said that the Lord Mayor and others have commented on how well Ahmadi Muslims are integrated. Now, it is the responsibility of Ahmadis living in Wiesbaden to excel in their service of the city and country, proving that we are people who like to live in a peaceful atmosphere.

Religion is a personal matter and freedom of religion has been expressed very clearly by the Holy Quran. The true requirement of the age is upholding human values where religion is not a source of dispute.

In today’s world, it is essential that Muslims overlook the beliefs of others and serve humanity. If we fail to do so, then love and peace can never be established.

The session ended with silent prayers.

Huzoor(aba) is in Germany as part of his European tour of 2019.