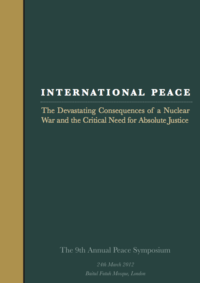 On 24th March 2012, the 9th Annual Peace Symposium was held at the Baitul Futuh Mosque in Morden – the largest Mosque in Western Europe – organised by the Ahmadiyya Muslim Community in the UK.

The event attracted an audience of more than 1000 people, including government ministers, ambassadors of state, members of both the House of Commons and the House of Lords, the Mayor of London, various other dignitaries, professionals, neighbours and guests from all walks of life. The theme of this year’s Symposium was “International Peace”. The Keynote Address was delivered by Hazrat Mirza Masroor Ahmad, Head of the worldwide Ahmadiyya Muslim Community.