Report of the event and summary of Huzoor’s address at Jamia UK, Haslemere

Hazrat Khalifatul Masih V(aba) not only awarded the Shahid degrees to the graduates and to position holders of the rest of the seven batches for the previous academic year, but also addressed the fresh batch of missionaries.

This was the seventh convocation held at Jamia Ahmadiyya UK and was attended by around 600 guests, including national office bearers of the UK Jamaat, Lajna Imaillah, families of Shahideen, as well as the amirs of those countries where the graduates belong to.

With this outgoing batch, a total of 131 missionaries have now graduated from Jamia Ahmadiyya UK since its start in 2005 – the first convocation was held in the Haslemere campus in 2012 and marked a new era for the UK Jamaat as it witnessed a new generation of missionaries entering the practical field under the direct guidance of Khilafat-e-Ahmadiyya.

The proceedings began in the Jamia auditorium just after midday with the recitation of a portion from Surah al-Fath (Ch.48: V.29-30) and translation, followed by the recitation of an Urdu nazm written by the Promised Messiah(as).

The academic report for Jamia Canada was then read out by the Principal Daud Hanif Sahib in which he highlighted the seven-year journey undertaken by the Jamia Canada graduates. This was followed by reports read out by the Principal of Jamia Germany, Shamshad Ahmad Qamar Sahib and Zaheer Ahmad Khan Sahib, President of Academic Committee, Jamia UK on the seven-year journey of their respective graduates.

After the reports, Hazrat Khalifatul Masih V(aba) distributed awards and degrees. Each Shahid graduate received their degree, Tafsir-e-Saghir and a collection of Huzoor’s(aba) addresses at convocations of the past, collated as a handbook titled Laiha-e-Amal.

The highlight of the convocation each year is the address delivered by Hazrat Khalifatul Masih(aba) in which Huzoor(aba) guides the graduates as to how they can best fulfil their roles as missionaries of the Jamaat.

Huzoor’s(aba) advice to the outgoing class is always eagerly anticipated, not only by the graduates, but by all in attendance and Ahmadis around the world.

In his address, after Tashahud, Ta‘awuz and the recitation of Surah al-Fatihah, Hazrat Amirul Momineen(aba) said that missionaries are those people who dedicate their lives for the spread of faith. The efforts they made during their studies would now assist them, but this should continue in their practical field. 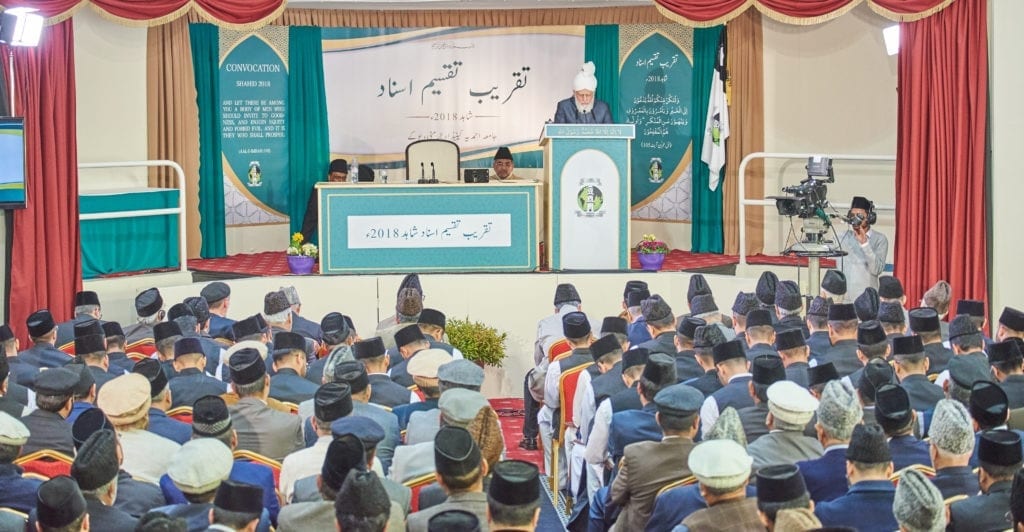 Knowledge, Huzoor(aba) said, is something that as it grows, spiritual knowledge should also expand, and with this, one’s relationship with Allah becomes more and more clear.

These young missionaries sacrificed their lives for the sake of the Messiah of Muhammad(sa), Hazrat Mirza Ghulam Ahmad(as). To further this mission is an immense responsibility which now rests on the shoulders of the graduates.

The missionaries have also sacrificed their lives to serve the Khilafat which was to be established in the latter days. Huzoor(aba) explained that it is no ordinary matter to make such a pledge. The responsibilities are vast, and the missionaries presented themselves for this very purpose. This should always be in their minds. These oaths should be fulfilled with all their God-given capacities.

“Never be disloyal to your Lord”

and always remain loyal to Allah as was Hazrat Abraham(as) (as stated in the Holy Quran).

The Promised Messiah(as) has explained this level of devotion. At one place, the Promised Messiah(as) stated that Abraham(as) was commended because, as stated in the Quran, he remained loyal and fulfilled his covenant. As Waqifeen, the graduates have also made a covenant, and to fulfil it requires all efforts to be made in this cause.

Such cowards who do not remain loyal to God, the Promised Messiah(as) said, are of no value. Huzoor(aba) explained that if one does not stand by the promises they have made, then there is no use for such a one.

Hazrat Abraham(as) was given his status due to his extreme loyalty to God, for example, he was put in the fire and bore immense pains and struggles. These difficulties, however, never allowed him to waver in his devotion. This is the level of devotion that is an example for all missionaries.

There are some Waqifeen who, not to speak of being practically left in the wilderness but even in fairly decent circumstances, begin to make the smallest of demands. As Waqifeen, the missionaries should remember that they should be able to endure all difficulties.

Even in normal circumstances, if there is a person who serves you well, you would naturally prefer such a one over a person who does not serve you at all. Huzoor(aba) explained that the graduates should be those who remain loyal to their Lord and never waver in their resoluteness.

At one place, the Promised Messiah(as) explained something very important, that until a person is not completely faithful to their Lord, they have not fulfilled their faith. To achieve this, one must pray and develop a connection and personal relationship with God. To excel in devotion to our Lord requires a lot of effort.

Huzoor(aba) emphasised that this is the level of devotion expected of our missionaries.

Hazrat Musleh-e-Maud(ra) once pointed our attention towards this in one of his couplets:

The oaths made by a Waqif-e-Zindagi and missionary surpass the promises made by Ahmadis.

(I am not of the disloyal; I am among those who are loyal)

This is something that all missionaries should make their goal and target. This is what they should be working towards.

Huzoor(aba) said that we must assess ourselves whether we are excelling in our relationship with our Lord. How much love is there in our hearts for Allah? Are we making all efforts to develop a connection with Him? If the answer is negative, then this is something requires our immediate attention, especially once graduates enter the practical field.

Huzoor(aba) went on to say that it is also necessary for the missionaries to study the Quran and Tafsir, pondering over the deeper and hidden meanings of the Quran. When people ask questions later on in the practical life, a missionary should be able to answer questions from the Holy Quran, the practices and sayings of the Holy Prophet(sa) and the writings of the Promised Messiah(as). All questions that are asked today can be answered from all these sources.

The seven-year course is not sufficient for this; this is just the start, and this should continue. Huzoor(aba) said that every day, a few hours should be dedicated for increasing knowledge and personal study. Along with this, one should pray that God increases their knowledge.

Huzoor(aba) said that a missionary should also have compassion for fellow humans. Within the system of the Jamaat, missionaries should be able to reconcile with people who are against the Jamaat or Islam in a way that they can explain the realities calmly to such people. To determine how to show compassion to even a wrongdoer, in light of the instruction of the Holy Prophet(sa), is something that should be a skill of each missionary.

For the edification of the youth, missionaries should show immense compassion; this will naturally bring everyone towards them. Huzoor(aba) said that in the practical life, everyone has their eyes set on the missionaries. The graduates should not think that as they are young, they will not be questioned as much as senior missionaries. They too have responsibilities to show members of the Jamaat the correct path.

However, Huzoor(aba) said, this can only be achievable though adopting the teachings of the Holy Quran and the high and noble example of the Holy Prophet(sa) in their lives.

When one’s intentions are pure, this can all be achievable and God Almighty shall help such a person.

As far as the Shariah, the teachings of the Prophet(sa), the sayings of the Promised Messiah(as) or the sayings of Hazrat Khalifatul Masih(aba) are concerned, no cowardice should be displayed. Missionaries should never display weakness in their faith. They should respond to allegations like unsheathed swords. 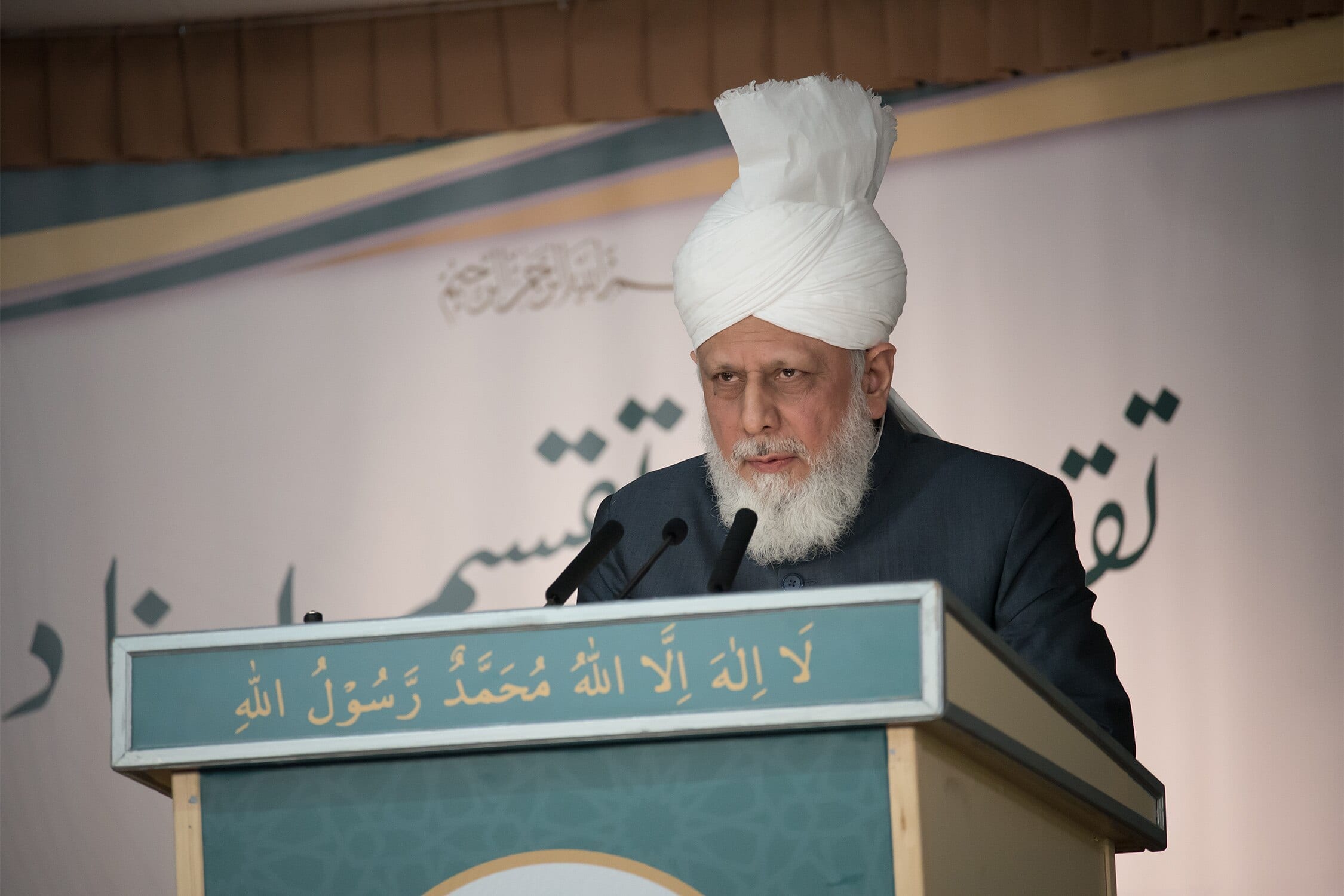 People at times interpret religion in their own manner. It is the responsibility of the missionaries to clarify such misconceptions, but before this, they must purify themselves.

(Serve as a guiding star in times of darkness; guide those who have gone astray)

Today, as the majority of the world delves in materialism, it is the responsibility of missionaries to become qutb (guiding stars) for the world as this is the oath made by the missionaries. The missionaries have been made leaders so that they may bring the world to them in order to show the truth and excel in spirituality. It is essential, however, to excel themselves first before encouraging others to do so.

The graduates were told that they should be confident in their own faith and should not follow the world.

Belonging to this environment, being born and raised here, being educated here is something that should assist the missionaries in teaching the truth to people in the West. This cannot be done without the help of God.

As those who have pledged to spread the mission of the Holy Prophet(sa) far and wide, we must be able to teach true morals to the world.

A heavy responsibility rests on the shoulders of the missionaries. In servitude of the Holy Prophet Muhammad(sa), missionaries have been given authority. If they do not realise their responsibilities, then there is no point in dedicating their lives for this cause.

Huzoor(aba) said that his prayer for the missionaries was:

(Become the recipients of God’s grace, blessings, guidance and faith; become a lover of Ahmad(sa)and a beloved of God)

Huzoor(aba), towards the end of his address, prayed that the missionaries were able to always remain loyal to their Lord and after receiving blessings, spread it among people. May they always be Sultan-e-Naseer (true helpers) of Khilafat and may we once again hoist the flag of Muhammad Rasulullah(sa) in the world. May they always be the ones who fulfil their promises and not the ones who break them.

Huzoor’s(aba) address was followed by silent prayer, group photos of each batch as well as a collective Jamia Ahmadiyya UK photo. This was then followed by Zuhr and Asr prayers and lunch.

Hazrat Khalifatul Masih V’s(aba) address at the convocation of Jamia Ahmadiyya UK will Insha-Allah be broadcast on MTA International on Tuesday, 30 April at 09:00 GMT and repeated during the day.