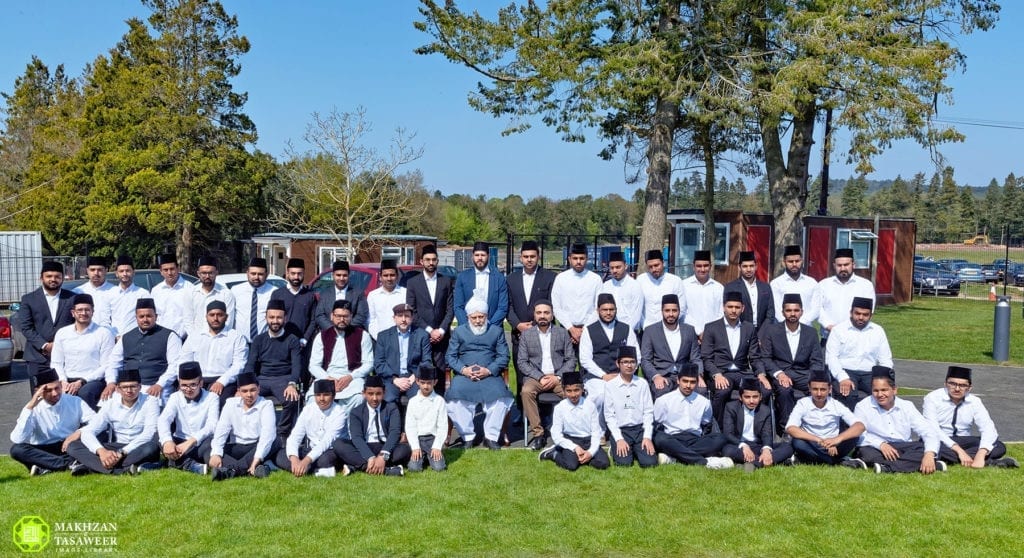 A group of Waqifeen-e-Nau from Switzerland had the good fortune of having a mulaqat with Hazrat Amirul Momineen(aba) on 21 April 2019 in which they asked many questions on varying subjects. This group mulaqat took place in the new markaz.

The first question asked was if a third world war erupted, what the role of Waqifeen-e-Nau would be?

“The role of the Waqifeen-e-Nau shall be the same then as it is now. If a world war is going to happen and such is the Divine Will that for the reformation of people and to turn them towards Allah the Almighty, He so wishes to create such conditions that people incline towards Him … then it shall be for this purpose that people are turning away from God Almighty. That is why before that happens, it is the role of the Waqifeen-e-Nau that within their countries, regions and people, they turn people’s attention towards the fact that they are forgetting the existence of God and get them to remember Allah, to bring them towards Him, bring them towards religion and help them fulfil the rights of man and God, lest a divine calamity befalls them in the form of wars. It is for this reason that calamities do appear … Hence, there is work to be done before and after. Firstly, making them aware of this and secondly, when they turn towards you teach them religion’

“Love for one’s country is part of faith”?

“The country Switzerland is your country; it’s citizens are part of your nation. You need to strive for their betterment and progress – this is love. However, love does not entail that if the nation’s law tells you to stop praying  or to stop believing in God, then you cease to do this. In such a situation, there is no love. Once Hazrat Ali’s(ra) son asked him, ‘Do you love God?’ He replied by saying, ‘Yes I do.’ He asked, ‘Do you love me?’ He replied by saying, ‘Yes.’ His son then asked, ‘How can these two loves coincide?’ Hazrat Ali(ra) replied by saying, ‘When the question of love for God arises, then love for you is secondary.

A Waqf-e-Nau said that whilst doing tabligh at book stalls, some individuals were abusive towards him. He asked how he should react?

Huzoor(aba) replied by saying to show patience and that if anyone flung books off the table, simply pick them up and place them back where they were. Huzoor(aba) emphasised the fact that if he was to show patience and pick those things up from the floor that the abusive individuals may have thrown off the tabligh stalls, people watching this would show sympathy and be moved by this and see the abuser as being in the wrong. Huzoor(aba) stated that he received reports where locals confronted such people and told them that what they did was wrong, when our Ahmadis showed patience in the face of abuse. Once, some people even offered to help distribute the literature after Ahmadis had to face abuse and showed patience.

Another question was asked in relation to how we can safeguard ourselves from the immorality prevalent in society today.

Huzoor(aba) stated that having good relations with the locals does not mean joining in their immoral activities, but rather one should build a good relationship with them by showing them kindness. However, it is the responsibility of not just the Waqifeen-e-Nau, but every Ahmadi to safeguard themselves from immoral practices. Integration means to work for the progress of your country, not to discard your own religious practices.

One Waqife-e-Nau asked Huzoor(aba) how he felt when he moved from the Fazl Mosque to Islamabad. Huzoor(aba) said:

“I have come to Islamabad many times before, so it is not the first time. However, I left one place and moved to another and I remember the people from that area. They would come everyday, men and women, stand and wave to me when I would go to the mosque. There would be an exchange of ‘Assalamo alaikum’ whilst coming and going from Namaz. Now those people have been left there and we have moved here. But now, there are new people here with whom ‘Assalamo alaikum’ and ‘Wa alaikumussalam’ is exchanged. These things are always present and they never are a hurdle [in the progress of the Jamaat]. These things are also temporary [the feelings associated with such moves] and they eventually cease to exist.”

“Why aren’t you asking about how I felt when I left everything in Pakistan and came here?”

Another question was which books Waqifeen-e-Nau should be reading. Huzoor(aba) replied by saying that the Waqf-e-Nau syllabus should be studied first. Huzoor(aba) reiterated that the most important book is the Holy Quran, and a daily recitation along with its translation was imperative.