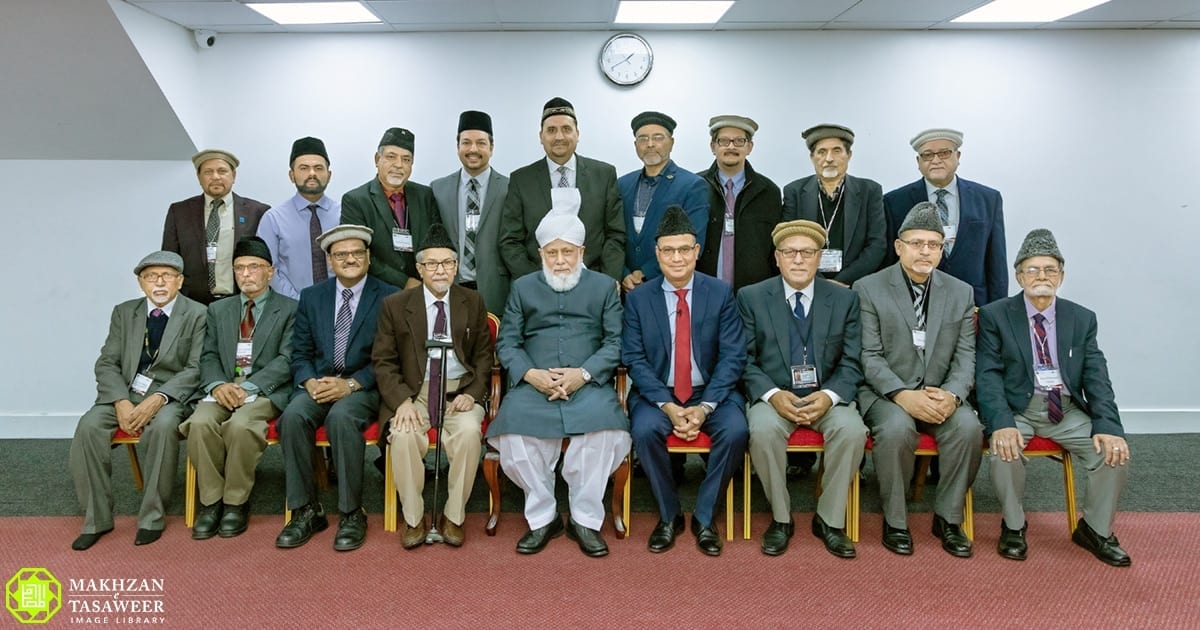 The Talim-ul-Quran and Waqf-e-Arzi team of the USA Jamaat had an audience with Hazrat Khalifatul Masih V(aba) on Saturday, 13 April 2019.

The meeting started with silent prayer led by Hazrat Khalifatul Masih(aba) at around midday and lasted for about an hour. A member of the team gave a PowerPoint presentation to describe the current structure of and the efforts being done by the department to encourage more members of the USA Jamaat to read and understand the Holy Quran.

With a flowchart on the screen, he informed Huzoor(aba) that the department had 14 assistant secretaries working under the national secretary, all with their own teams working on various areas of Talim-ul-Quran.

An introduction was given to “Al Furqan”, an online Quran-learning platform where Lajna members (111 in total) are actively teaching the correct pronunciation and reading of the Holy Quran. Male teachers with expertise in teaching the Holy Quran are also part of the programme. Al Furqan currently has 1,788 students attending the online classes. A breakdown of students in terms of Khuddam, Ansar, Lajna, Nasirat and Atfal was presented.

The classes range from the basics i.e. Yassarnal-Quran to reading the Quranic text to understanding the text with its translation. Hifz-ul-Quran (memorisation of the Quran) is also facilitated through various teaching modes. Parents are encouraged to attend classes to be able to further the initiative at domestic level. One-on-one classes are also available where possible, although it can be challenging to arrange teachers for such a facility.

Huzoor(aba) instructed the department to work on exploring more teachers. Huzoor(aba) said that he knew that there were members in the US Jamaat who could be of help and it was only a matter of working on finding them and training them as teachers.

Huzoor(aba) enquired whether the Hifz-ul-Quran class was held daily or on a weekly basis. Told that it was currently held as a three-week long learning camp on a yearly basis, Huzoor(aba) instructed the department to look into organising it more regularly in a centre or at the Baitur Rahman Mosque – the headquarters of the USA Jamaat in Maryland.

Huzoor(aba) instructed that to ensure Hifz-ul-Quran, such classes ought to be conducted on a more regular basis to attain desired results.

The report went into details about regional Quran classes and local Quran conferences where material was provided by the national department for them to impart Quran learning accordingly. Upon the mention of Amin ceremonies, Huzoor(aba) instructed that more could be held if work was done more efficiently.

Huzoor(aba) said that with the influx of new Pakistani members settling in Rabwah, Majlis Ansarullah Pakistan had arranged for the Ansar to learn to read the Holy Quran afresh and that Amin ceremonies were held for Ansar that had learnt to read the Quran under this arrangement. Huzoor(aba) advised that the same could be done with elderly men and women in USA who newly learn the Quran under the Talim-ul-Quran arrangements.

As the department also works on encouraging members of USA Jamaat to sign up for Waqf-e-Arzi, Huzoor(aba) enquired about the number of Waqifeen-e-Arzi (temporary devotees) and instructed that they needed to be increased. Huzoor(aba) instructed that the team members of the department should lead by example and go for Waqf-e-Arzi on a regular basis.

As Lajna members of the Talim-ul-Quran team were also present, Hazrat Khalifatul Masih(aba) granted them the opportunity to present a report on their efforts.

One of the Lajna teachers mentioned how she had managed to successfully set up an online class. Huzoor(aba) instructed that upon completion of every part (sipara), prizes should be given to the students, even if it is a certificate of appreciation. This would work as an incentive and encourage them to progress towards completing the whole Quran.

Huzoor(aba) drew the attention of the Lajna that by teaching the Quran to young girls, they were actually securing the future generations as these young girls would grow up to teach their own children and grandchildren the correct reading of the Holy Quran.

Huzoor(aba) said that women were allowed to teach boys under the age of 15.

A member from the men’s team mentioned that it was easier to teach youngsters who started learning through the department’s resources, but older men who had learnt from other sources when they were young made mistakes that were hard to correct. Huzoor(aba) said that they should be gradually taught the correct pronunciation by correcting the basic mistakes. Tajweed rules can then follow later.