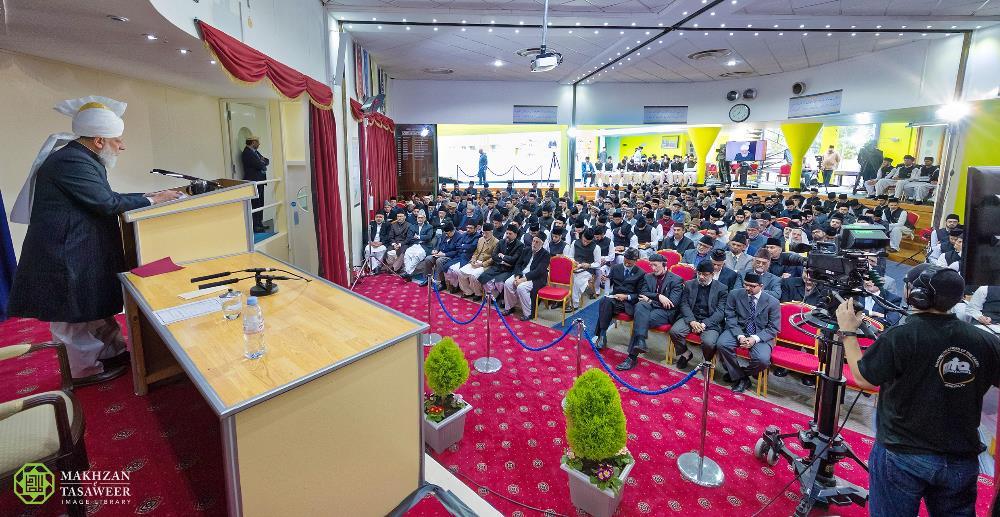 The World Head of the Ahmadiyya Muslim Community, the Fifth Khalifa (Caliph), His Holiness, Hazrat Mirza Masroor Ahmad presided over the ceremony and delivered the keynote address. 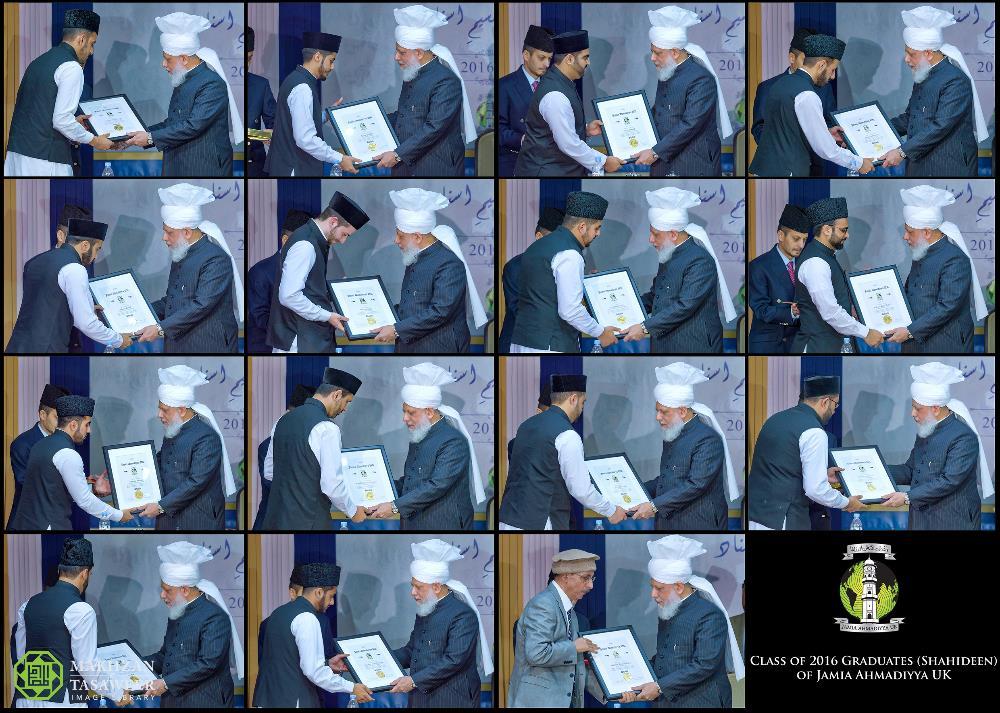 Following the presentation, Hazrat Mirza Masroor Ahmad delivered a faith-inspiring address, in which he said the young Imams bore a heavy duty of peacefully defending the true teachings of Islam from false accusations and misunderstandings.

His Holiness said the graduates had now entered a new phase in their lives as they moved from being students to representatives of the Ahmadiyya Muslim Community and this came with new challenges and far greater responsibilities. 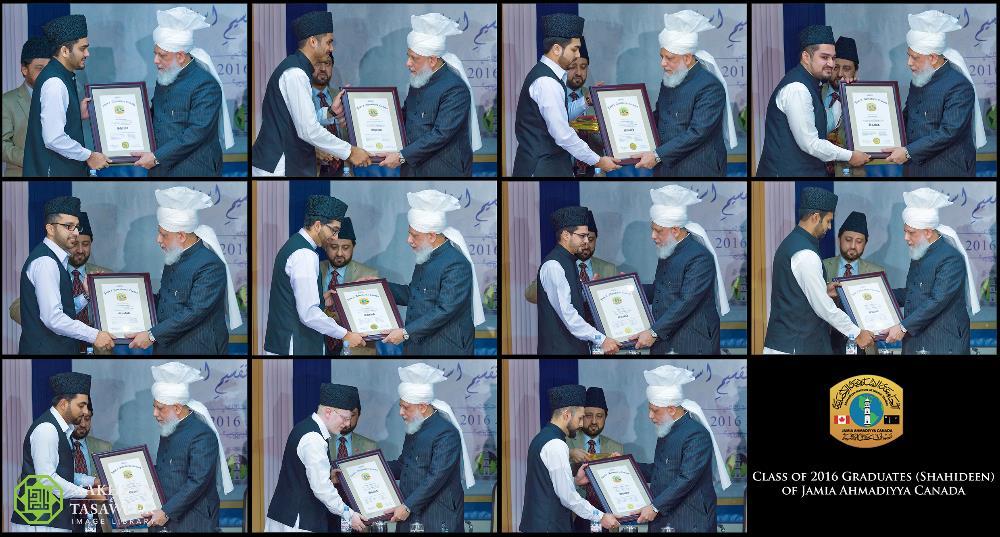 “As Missionaries, you will need to fulfil the responsibility of providing spiritual and moral guidance to Ahmadi Muslims and you will also need to spread the peaceful teachings of Islam to those who are unaware of its true message.”

“One the one hand, Ahmadi Muslims will expect that you yourselves are models of piety and goodness, whilst on the other non-Ahmadis will also expect you to portray the true teachings of Islam. Further, there will be some non-Muslims who hold grave misconceptions about Islam and so it is your task to alleviate their concerns and tell them about its true teachings. Thus, you must now be ready for this.” 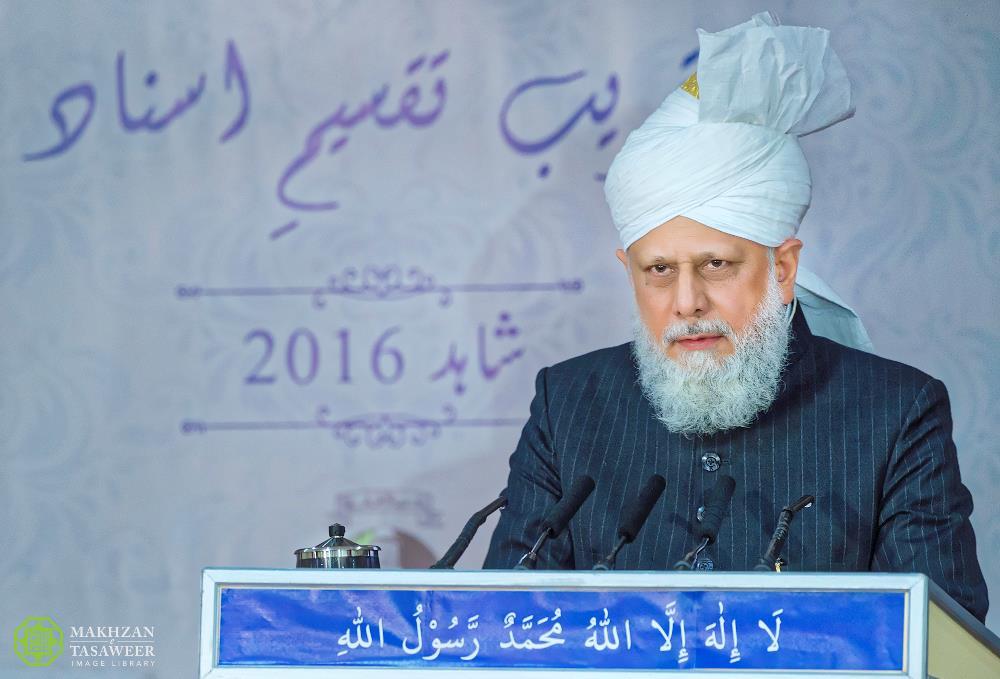 The Caliph said the seven years of study in Jamia, were, in essence, a means to develop an interest in striving for knowledge and a basis for future-study. Thus, as missionaries it was their duty to continually enhance their knowledge according to the instruction of the Holy Prophet Muhammad (peace be upon him), who instructed Muslims to seek knowledge from the cradle to the grave.

“What you will study now will not be for the sake of exams; rather you will study in order to benefit the world and yourselves and so you should keep this in mind at all times.”

His Holiness also highlighted the need for the young Imams to develop knowledge beyond religious books and advised that they should keep abreast of current world affairs. 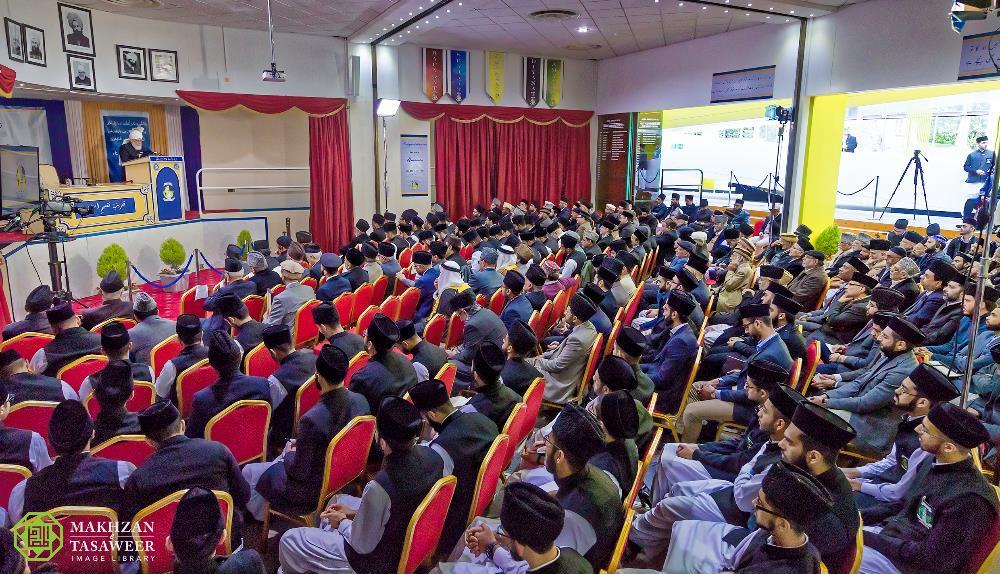 Speaking about the current state of the world, Hazrat Mirza Masroor Ahmad said:

“The world is rushing towards its destruction. Those immoral acts which all prophets came to stop, are being promoted, and attempts are being made to legalise them in the name of freedom.”

“In reality, such immoral practices are being spread as part of a planned scheme hatched against religion so that people may be pulled away from religion.”

His Holiness said it was important to use wisdom to answer those who raised objections against religion, however never should an Ahmadi Muslim try to hide his beliefs or display hypocrisy. 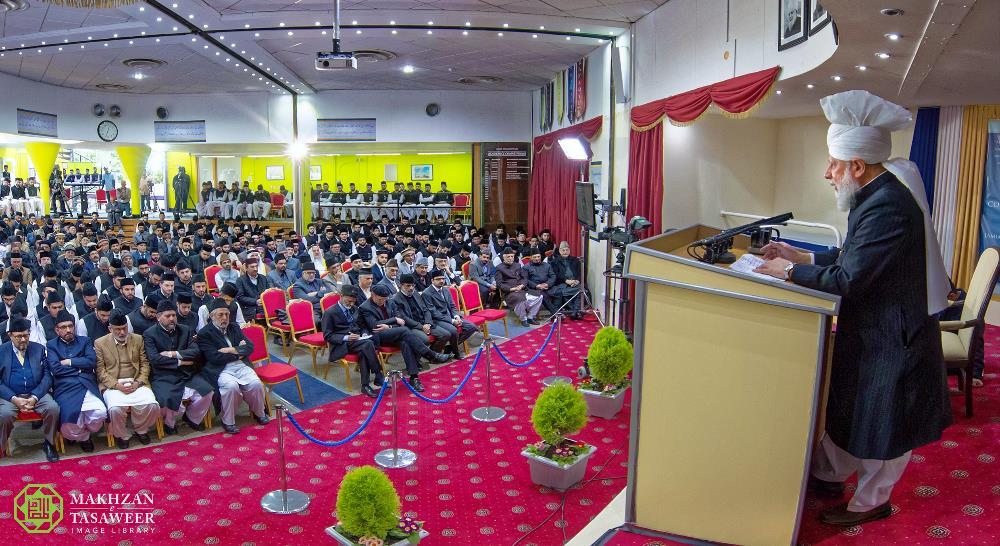 His Holiness also said that having pledged their lives for the service of the peaceful teachings of Islam, Missionaries should never waste time.

“It is impossible that you have no work to do but if someone thinks they have free time, then they should create work for themselves by studying and reading books so that their knowledge increases.”

His Holiness advised that the young missionaries must look for new ways of spreading the true teachings of Islam and look to involve people in good works and use innovative methods to attract people to Mosques.

Speaking of the responsibilities of a Missionary, Hazrat Mirza Masroor Ahmad said:

“Having qualified as Missionaries, you must remember that your role comes with heavy responsibility. You must understand that it is your duty to try and bring about a spiritual revolution of piety within the world. However, before you can reform others you must reform yourselves.” 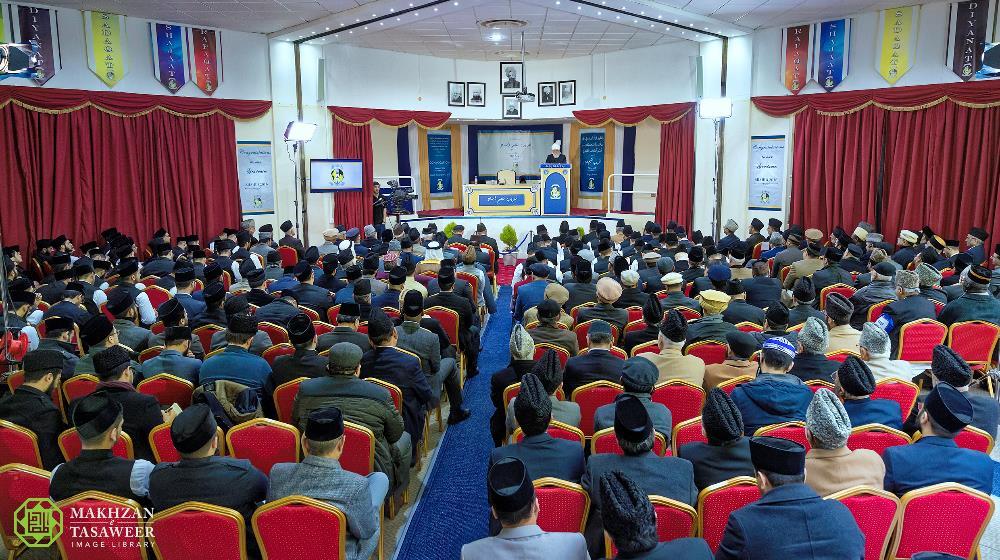 “Wherever you are sent you must kindle a fire but, of course, I do not mean a physical fire lit by matches and fuel. Rather, the fire you must kindle is within your heart and this means you should conduct your duties with passion, zeal and devotion. Wherever you go, people should become well aware that a missionary of the Ahmadiyya Muslim Community is spreading the beautiful and peaceful teachings of Islam.”

His Holiness also cited the services of pioneer missionaries of the Ahmadiyya Muslim Community who were sent to Africa decades ago and who lived without basic amenities and faced many hardships, yet were able to spread the peaceful teaching of Islam through their ardent prayers and hard work.

His Holiness said, a missionary’s work should not be hindered because of hardships; rather missionaries should have the potential and strength to bear adversity. 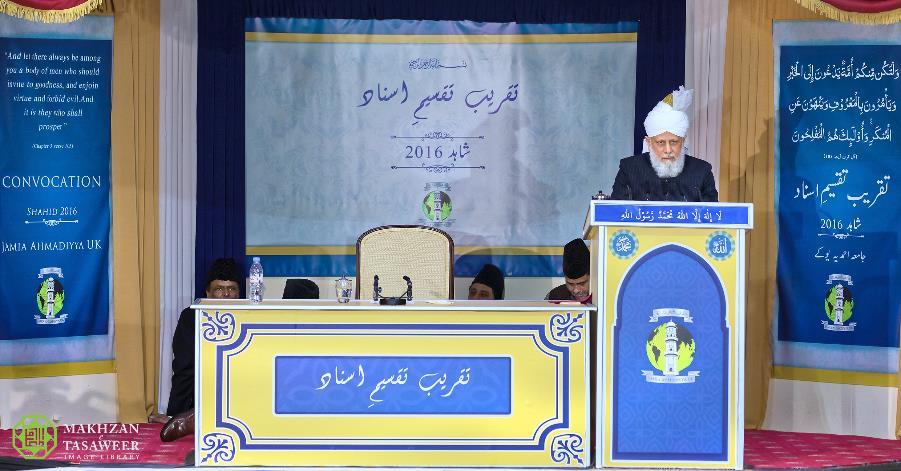 In conclusion, His Holiness drew the attention of the young Imams towards attaching the Muslim youth to their faith.

“Wherever you go, bring the youth of that area closer to faith. Some are moving away from religion and young missionaries should bring the youth closer to their faith. You should try to take them away from the pursuit of worldly desires and inculcate self-sacrifice and the importance of religion amongst them.” 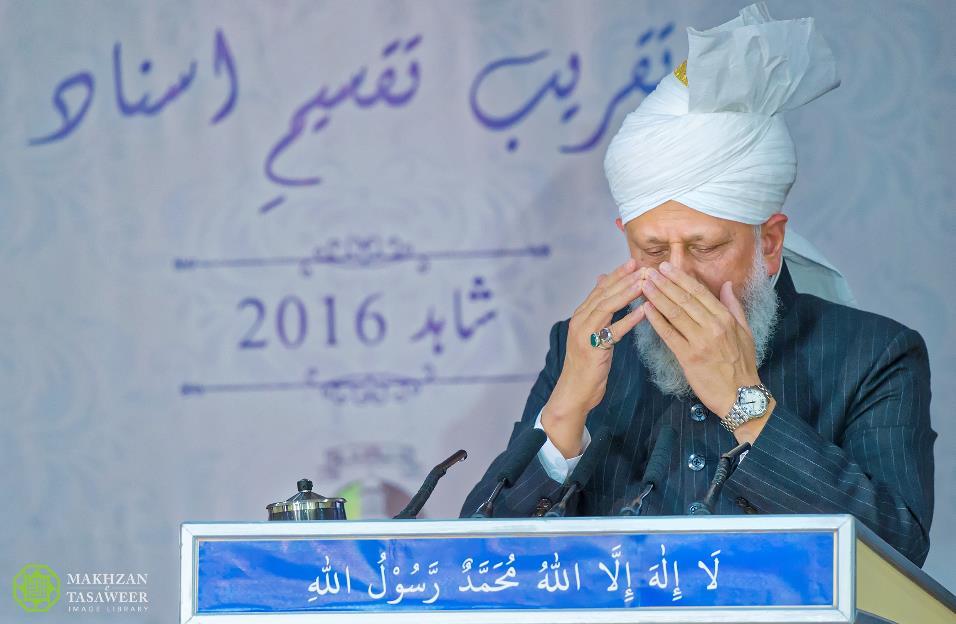 His Holiness said that

was the key for promoting peace in the world and inter-faith harmony. 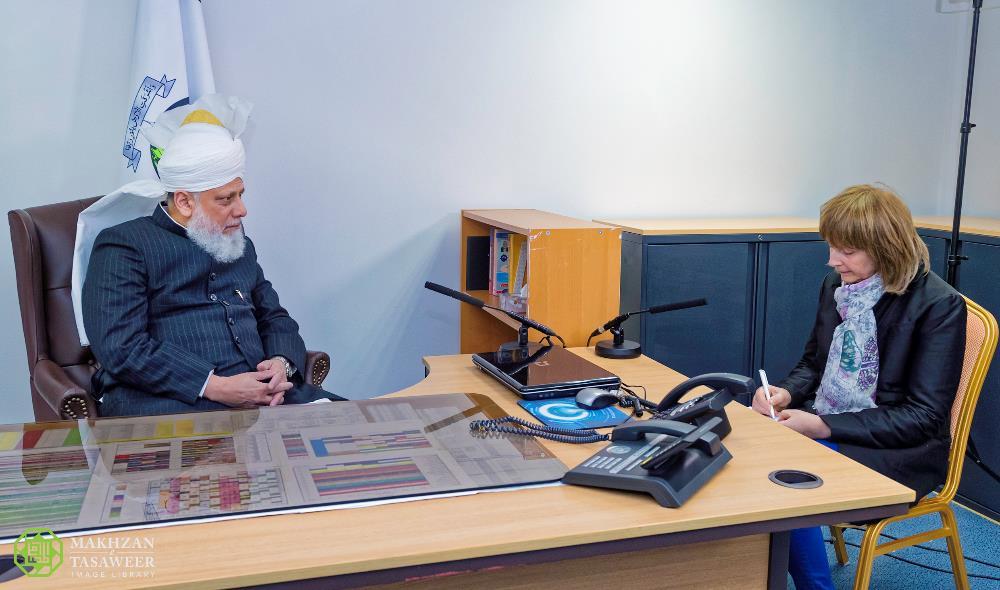 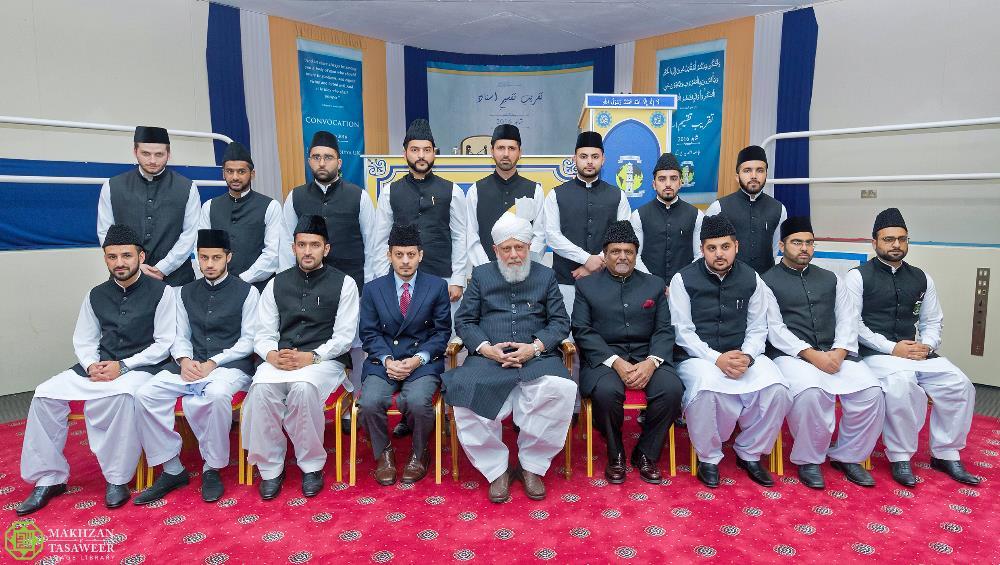 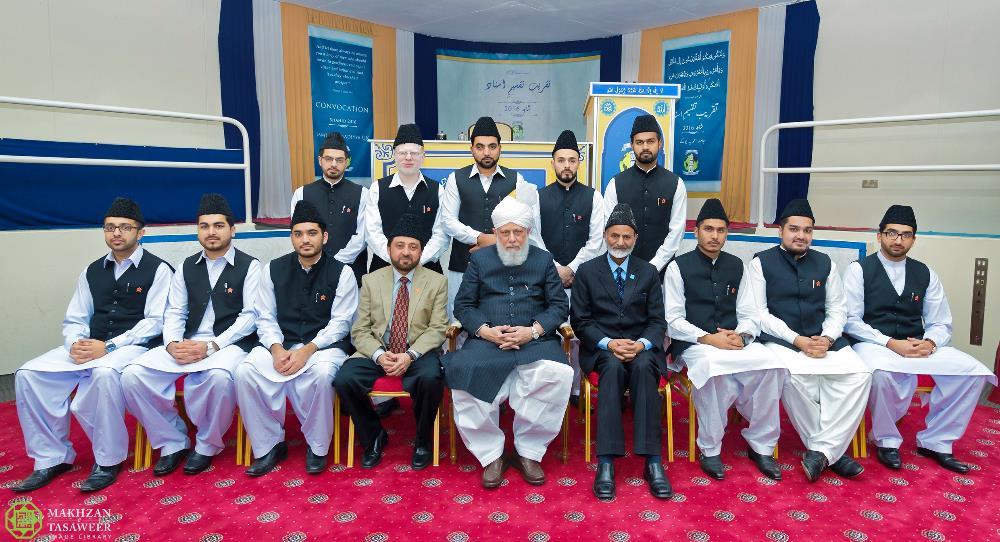