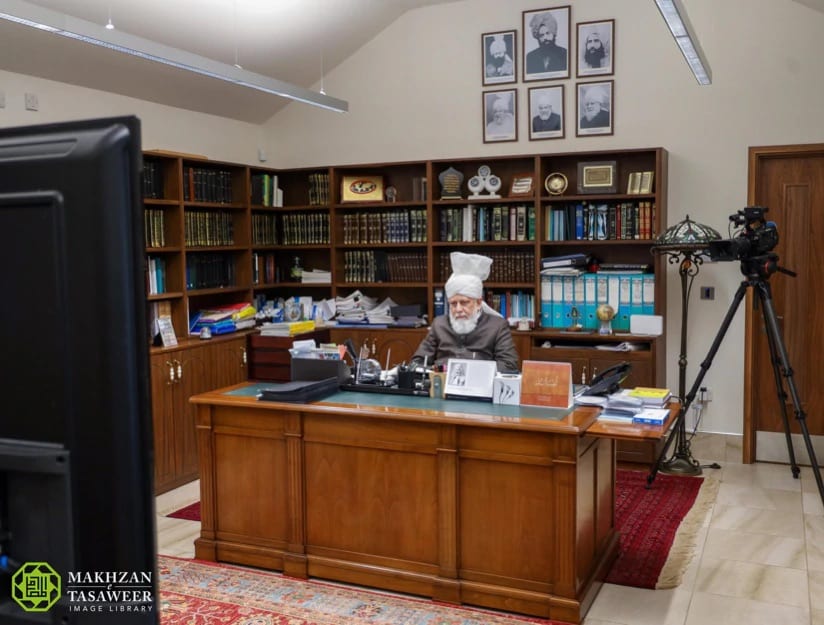 “There is no one else. It is only Allah the Almighty. Only Allah helps me and no one else has the strength to help me.” – Hazrat Mirza Masroor Ahmad

On 31 January 2021, the World Head of the Ahmadiyya Muslim Community, the Fifth Khalifa (Caliph), His Holiness, Hazrat Mirza Masroor Ahmad held a virtual online meeting with over 130 female members of the Waqf-e-Nau Scheme from Bangladesh.

His Holiness presided the meeting from his office in Islamabad, Tilford, whilst the Waqf-e-Nau members joined from the Darut Tabligh Mosque complex in Dhaka, which serves as the National Headquarters of the Ahmadiyya Muslim Community in Bangladesh.

The event started with the recitation of the Holy Quran, followed by a poem and a saying of the Holy Prophet Muhammad (peace and blessings be upon him) and an excerpt from the writings of the Promised Messiah (peace be upon him).

For the rest of the 55-minute meeting, members of Waqf-e-Nau had the opportunity to ask His Holiness a series of questions regarding their faith and contemporary issues.

In response to a question about the spiritual status that women can attain, Hazrat Mirza Masroor Ahmad said:

“Other than prophethood, according to the Holy Quran, women can attain the spiritual rank of a Siddiq (truthful), Shaheed (martyr), Salihaat (righteous). There is a Hadith where a female companion of the Holy Prophet Muhammad (peace and blessings be upon him) asked, ‘Men can attain martyrdom and they take part in battles and make great sacrifices. But those of us women who are at our homes, what is our status?’ The Holy Prophet (peace and blessings be upon him) replied, ‘When you look after your homes and raise your children well and nurture the next generation and guard over the homes, you will attain the same reward as men.’” 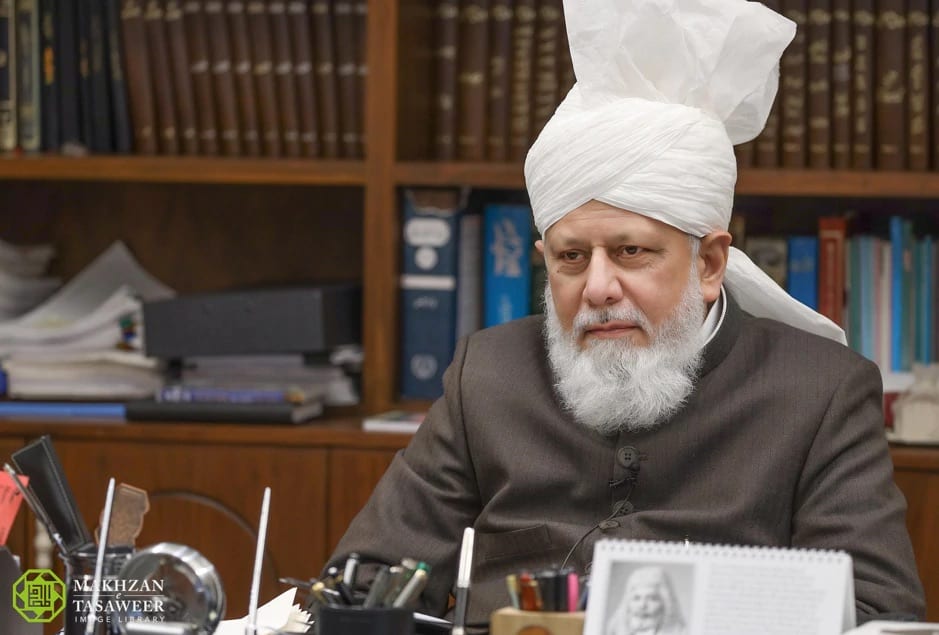 One of the younger attendees asked how she could become a good Waqf-e-Nau from a young age.

His Holiness advised her that when she reaches the age of seven she should start offering the five daily prayers regularly and learn how to read the Holy Quran and recite it daily. Additionally, His Holiness said that children should listen to their parents and that members of the Waqf-e-Nau scheme should be known for their good character.

“Always remember that you are Waqf-e-Nau. You have to behave well and always be polite and kind to your fellow girls and fellow students and manifest the highest standards of conduct so that every person who knows you testifies to the fact that you are extremely well mannered and of good character. You can then tell them, ‘It is because I am Waqf-e-Nau that I am well behaved and seek to do good.’” 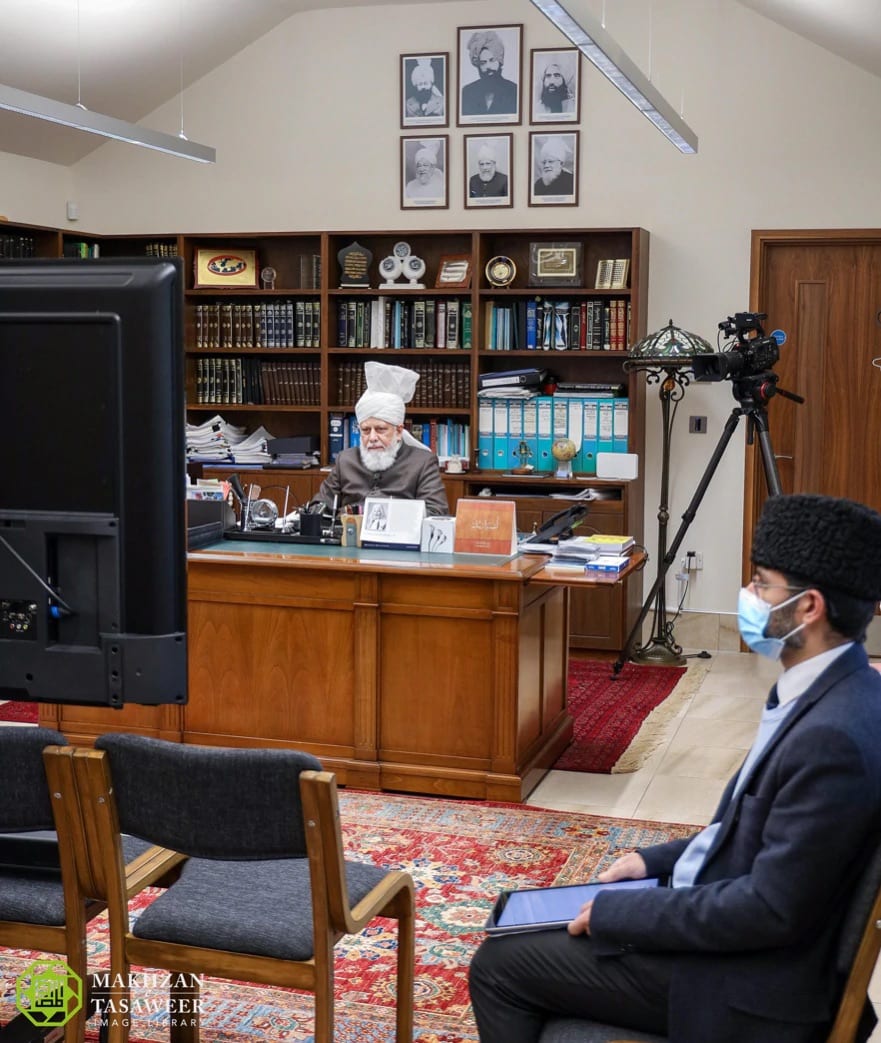 One Waqf-e-Nau member asked about how a person could best show gratitude to God Almighty.

“The best way to be grateful to Allah the Almighty is that when you say ‘All praise belongs to Allah,’ you should do so whilst keeping in mind all the favours of God that He has bestowed upon you. Even if a person has to face some trials and tribulations, they should bear them with patience and remember that Allah has conferred upon them countless other bounties and blessings. Those favours should always be borne in mind and never forgotten.”

His Holiness narrated the story of a king and his courtier. The king offered his courtier a fruit which turned out to be very bitter, however the courtier ate the fruit and highly praised it and expressed gratitude. When the king realised the fruit was bitter he asked his courtier why he had praised it. The courtier replied that it would have been ungrateful of him to spit it out and complain and forget all past favours he had received from the king and so it did not behove him to show any ingratitude.

His Holiness also narrated a saying of the Holy Prophet Muhammad (peace and blessings be upon him) that a person should always look at those less fortunate than himself in matters of materialism and thus express gratitude for the favours that God has shown us. However, in matters of faith and spirituality, a person should look at those of a higher rank and should try to attain their status and excel them. His Holiness said this was the way to become truly grateful to God.

His Holiness was asked how he was as a student in his secular education and what he had desired to be when he grew up and if His Holiness had any guidance for those who were currently studying.

“I was not the best of students but all of you should strive to excel in your studies. Nowadays without studying it is difficult to survive and because you are Waqf-e-Nau and you have dedicated your lives, you should strive to become an asset for the Ahmadiyya Muslim Community. Therefore, by studying and gaining knowledge strive to improve and excel so that you may be able to better the lives of the future generations and be in a position to guide and protect them.”

“When I was young I had many aspirations and sometimes I thought I would become one thing and at other times I thought of becoming something else. Eventually, because I had an interest in agriculture, I did a degree in that and thereafter I dedicated my life for the sake of the Ahmadiyya Muslim Community and Allah gave me the opportunity to do so. Anyway, this desire to dedicate my life was one that I had from childhood and which I was able to fulfil with the Grace of God.”

“I had many other wishes whereby I thought I may become one thing or another and then I would dedicate my life. I could not become any of those but Allah gave me the opportunity to dedicate my life and ultimately Allah the Almighty brought me to this position. Anyway, my guidance for all of you is that because you have dedicated your lives, you should work diligently, study hard and seek to achieve a high standard in your studies. Even if later, you do not go into employment, you will benefit from your education and will be able to use it to help the future generation.”

A mother mentioned the challenges she faced raising her young child. She said that having a small child often left her exhausted and she sought the guidance of His Holiness in this regard.

“Even if you find it difficult, you should not express your anger at your child or take out your frustration upon her. Rather, you should explain to the child that you are tired and you are going to rest and reassure her that you will play with her afterwards. Children are naturally intelligent and they do understand. You can even tell her that you are tired and so she should press your legs or massage your head and the child will begin to enjoy that too. In this way you can guide and train her but do not show anger, do not shout and do not say anything negative to them.”

The mother who asked this question also enquired what prayer she should recite in order to best control her emotions, upon which His Holiness said she should recite Durood Shareef – invoking blessings upon the Holy Prophet Muhammad (peace and blessings be upon him).

In another question, His Holiness was asked that apart from God who had been a source of emotional support that His Holiness had relied upon during his period of Khilafat in the face of adversity and the intense opposition and persecution faced by the Ahmadiyya Muslim Community.

“There is no one else. It is only Allah the Almighty. Only Allah helps me and no one else has the strength to help me.”

At the end of the meeting, His Holiness prayed that the Waqf-e-Nau members be those who lived up to their pledge of devoting their lives for the sake of Islam.

“May Allah the Almighty protect you and keep you safe and, as female members of the Waqf-e-Nau scheme, may you all come to fulfil the true purpose and objectives of the dedication of your lives for the sake of your faith and be those who protect and nurture the future generation in the best way. May a pious Ahmadi Muslim generation be born and raised through you and may they become those who carry forth the propagation of the Ahmadiyya Muslim Community and spread its message in Bangladesh. I also pray that may you soon be relieved from the evil clutches of the fanatical religious clerics in your country and may Allah the Almighty always be your Helper and Protector.”