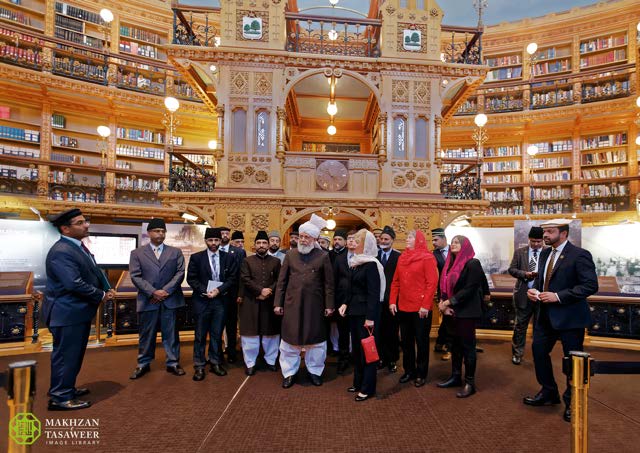 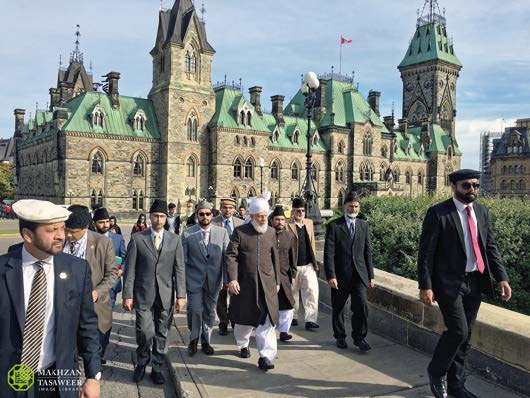 On 17 October 2016, the World Head of the Ahmadiyya Muslim Community, the Fifth Khalifa (Caliph), His Holiness, Hazrat Mirza Masroor Ahmad was welcomed to Canada’s Houses of Parliament by Prime Minister, Rt Hon. Justin Trudeau, Cabinet Ministers and over 50 MPs and Senators.

Later in the day, His Holiness delivered an historic keynote address entitled

“Human values – the foundation for a peaceful world”

to an audience of more than 225 people at a special reception held at the Sir John A. Macdonald Building at the Canadian Parliament in Ottawa. 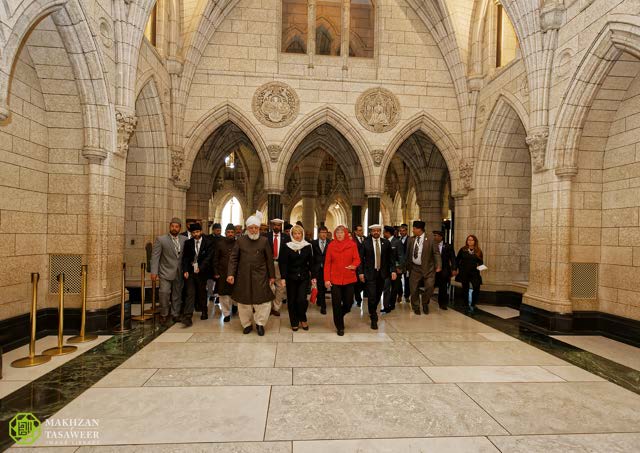 More than 110 guests attended, including over 50 Members of Parliament. The event was also attended by a number of Government Ministers including Hon. Kirsty Duncan, Minister of Science and the official representative of the Prime Minister and Hon. John McCallum, Minister for Integration, Refugees and Citizenship.

Also in attendance were Senators, Members of the Diplomatic Corps, including 11 Ambassadors of State, media representatives, academics, NGO leaders, religious leaders and prominent figures from various other sectors of society.

During his keynote address, Hazrat Mirza Masroor Ahmad addressed various issues of global importance, including the risk of a global war, religious freedom, increasing radicalisation and extremism and international relations.

His Holiness called on the world’s governments to display true justice and equity in all matters. His Holiness also presented Islamic teachings and offered solutions to the world’s problems based on the teachings of the Holy Quran.

Reflecting upon the need for unity in society, Hazrat Mirza Masroor Ahmad said:

“Irrespective of differences of background, I believe that on the basis of humanity, we are all joined together, and should therefore be united. All people and all organisations, must collectively endeavour to uphold human values, and strive to make the world in which we live, a better and far more harmonious place.” 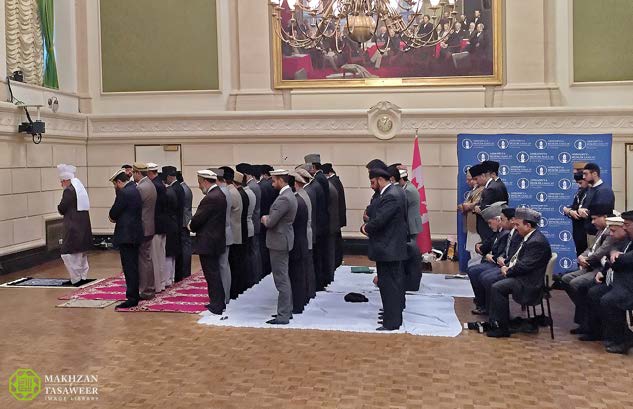 “If human values and human rights are not upheld in one country or region, it has a knock-on effect upon other parts of the world and such wrongdoing can spread further afield. Conversely, if there is goodness, humanity and prosperity in one part of the world, it will have a positive effect on other societies and other people.”

Speaking about the increasing conflict in the world, Hazrat Mirza Masroor Ahmad said:

“As a result of modern forms of communication and transport, we are all now much closer together and are no longer confined or bound by geography. Yet, it is a strange and tragic paradox that even though we are more connected than ever before, we are actually growing more distant by the day. It is extremely regrettable, and a source of grief, that instead of uniting and spreading love amongst mankind, the world has paid far greater heed towards spreading hatred, cruelty and injustice.” 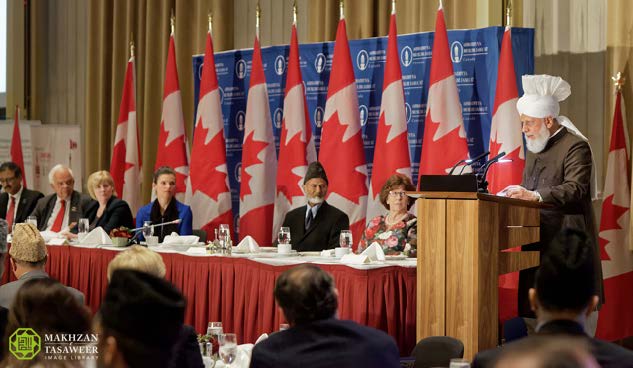 His Holiness admitted that fear of Islam was growing in much of the world. However, he said that fear of the religion itself was completely unnecessary.

“Let me reassure all of you that Islam is not what you commonly see or hear portrayed in the media. As far as my knowledge of Islam is concerned, I only know of that Islam whose teachings are based on its name. The literal meaning of the word ‘Islam’ is peace, love, and harmony and all of its teachings are based upon these noble values.” 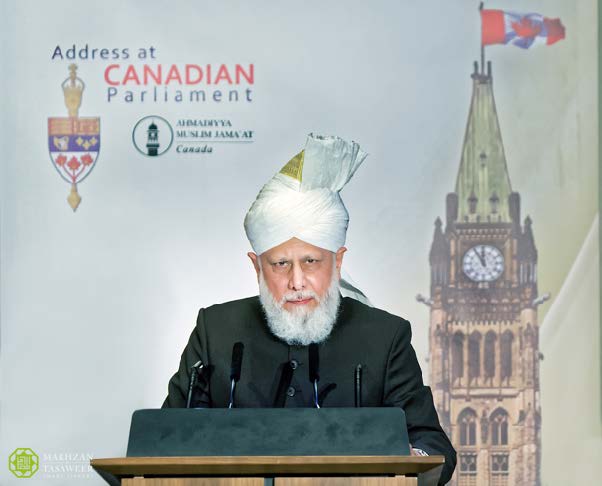 “Unfortunately, it cannot be denied that there are some Muslim groups, whose beliefs and actions are in total contrast to Islam’s teachings. In complete violation of Islam’s fundamental teachings, they are perpetrating the most horrific violence and terrorism in its name.”

His Holiness said that universal religious freedom was a pre-requisite for any successful and tolerant society.

“The Holy Quran categorically states in chapter 2, verse 257 that ‘there should be no compulsion in religion.’ What a clear, comprehensive and unequivocal statement that enshrines freedom of thought, freedom of religion and freedom of conscience. Thus, my belief and my teaching, is that every person, in every village, town, city or country has the undisputed right to choose his or her religion and to practice it.”

His Holiness said it was a cause of regret that governments in the Muslim world and also some Western Governments had sought to restrict the religious rights of some communities within their nations.

His Holiness said that any attempt to curb religious freedom was dangerous. 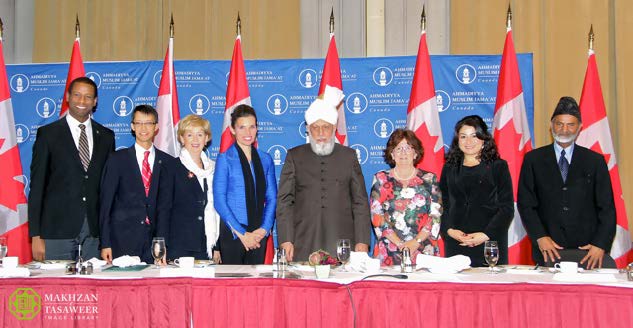 “Every individual has the right to peacefully preach and propagate his or her teaching to others. These freedoms ought to be guaranteed as basic human rights, and so legislative assemblies or governments should not unduly involve themselves in such matters.”

“It is not wise for governments or parliaments to place restrictions on the basic religious practices or beliefs of people. For example, governments should not concern themselves with what type of clothing a woman chooses to wear. They should not issue decrees stating what a place of worship should look like. If they overreach in this way, it will be a means of restlessness and heightening frustrations amongst their people. Such grievances will continue to exacerbate if they are not checked and ultimately will threaten the peace of society.”

Speaking about the role of Government according to Islamic teachings, Hazrat Mirza Masroor Ahmad said:

“It is the task of the government and parliamentarians, as guardians of their nations, to legislate in a way that gives rights to their citizens rather than takes their rights away.”

His Holiness said that though religious freedom was a principle of vital importance, wherever there was a risk of extremism or incitement to hatred, it was the task of Governments to intervene and take firm action in order to protect their people.

His Holiness also spoke of the need for justice both in domestic affairs and international relations.

“To be handed the keys to government is a huge trust and so we often see heads of state pledge to serve their nations faithfully and with absolute justice. Sadly, in many cases such honourable pledges prove to be hollow words.”

“without considering the potential consequences”.

He said such weapons often end up in the wrong hands or are used in order to kill innocent civilians.

Citing Saudi Arabia’s war in Yemen as a prime example of injustice and reflecting upon its potential consequences, Hazrat Mirza Masroor Ahmad said:

“It is well known that Saudi Arabia is using weapons purchased from the West in its war in Yemen, in which thousands of innocent civilians, including women and children, are being killed and so much destruction is being wrought. What will be the ultimate result of such arms trading? The people of Yemen, whose lives and futures are being destroyed, will not only bear hatred and seek revenge from Saudi Arabia but will also bear hate towards Saudi’s arms suppliers and the West in general.”

“With no hope or future prospects left, and having witnessed the most horrific brutality, members of their youth will be prone to radicalisation and in this way a new vicious cycle of terrorism and extremism will arise. Are such destructive and devastating consequences worth a few billion dollars?”

His Holiness also said that international institutions such as the United Nations needed to ensure fairness and equity between members states.

“If only the major powers and the international institutions, such as the United Nations, had truly acted upon their founding principles, under all circumstances, then we would not have seen the toxic plague of terrorism infect so many parts of the world. We would not have seen the world’s peace and security repeatedly undermined and destroyed. And we certainly would not have witnessed the huge refugee crisis, which now confounds and frightens the people of Europe and other developed countries.”

“The United Nations must also play its role in establishing peace in the world, unencumbered by politics, injustice or favouritism.”

“I hope and pray that Allah the Almighty enables the United Nations and the world’s governments to act in this way so that true and long-lasting peace may be established. The alternative does not bear thinking about, because if we continue as we are then the world is charging madly towards a huge catastrophe in the shape of another world war.”

“May Allah grant wisdom to the world’s leaders and policy makers so that the world we leave behind for our children and future generations is a world of peace and prosperity.”

During the event, His Holiness, Hazrat Mirza Masroor Ahmad presented Hon. Louise Arbour, the former High Commissioner for Human Rights at the United Nations and a former Canadian Supreme Court Judge with the Sir Zafrullah Khan Award for Public Service. This award recognised her outstanding public service during her long and distinguished career.

Upon receipt of the award, Hon. Louise Arbour said:

“I am deeply honoured to receive this very prestigious award that is named after a great jurist, lawyer, judge and a great diplomat. I am particularly honoured to be associated with Sir Zafrullah Khan, as he was a Chief Judge and President of the International Court of Justice… I have also always been deeply impressed by the promotion of the culture of peace that the Ahmadiyya Muslim Community has stood for and continues to stand for.”

A number of guest speakers also took to the stage.

“Your Holiness, Hazrat Mirza Masroor Ahmad, on behalf of the US Commission on International Religious Freedom I am honoured to be with you tonight. What has always impressed us about the Ahmadiyya Muslim Community is how, despite being all too often victims of persecution, you remain champions for the rights of others who are being persecuted. In a world where intolerance seems to be increasing the Ahmadiyya Muslim Community remains a strong advocate of tolerance and goodwill.”

Earlier in the day, His Holiness held a range of meetings with Federal Ministers of Canada’s Government, Senators and MPs. His Holiness also held a meeting with Prime Minister Rt. Hon. Justin Trudeau. 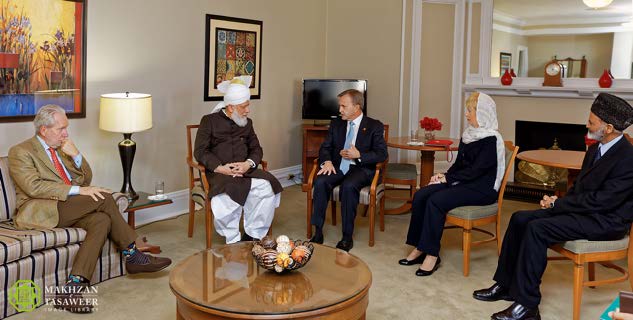 The Head of the Ahmadiyya Muslim Community was also officially recognised by the Speaker of Parliament during a session of Question Period, in which all present members of the House of Commons, including the Prime Minister, stood and gave His Holiness a standing ovation.

Further, Hon. Judy Sgro MP, read out a Members Statement in the House of Commons that stated:

“Mr. Speaker, earlier today the global spiritual leader of the Ahmadiyya Muslim Community arrived in Ottawa for a formal visit to Parliament Hill.

During his time with us, he will meet with Cabinet Ministers, Senators, Members of Parliament, and the Prime Minister in an effort to further underscore his peaceful message of love for all and hatred for none.

This work is part of an ongoing effort undertaken by His Holiness to showcase the peaceful nature and beauty of the faith (of Islam) and while calling on global powers to advance an agenda of peace, religious freedom, and the advancement of human rights in Canada and around the world.

I applaud His Holiness and members of the global Ahmadiyya faith for their work, and I extend a hand of friendship on behalf of my constituents and the people of Canada.”

The special reception concluded with a silent prayer led by Hazrat Mirza Masroor Ahmad. Following dinner Parliamentarians and guests were able to meet personally with His Holiness.