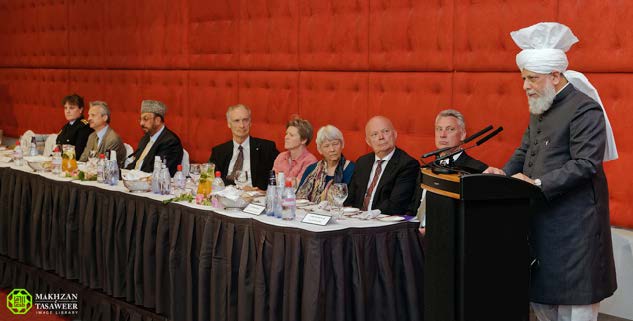 “lens of justice, rather than lens of prejudice”

On 9 May 2016, the World Head of the Ahmadiyya Muslim Community, the Fifth Khalifa (Caliph), His Holiness, Hazrat Mirza Masroor Ahmad delivered the keynote address at a special reception held in his honour at the Hilton Hotel in Copenhagen, Denmark.

During his keynote address, Hazrat Mirza Masroor Ahmad spoke about the peaceful objectives of the Ahmadiyya Muslim Community and the claim of its Founder, His Holiness, Hazrat Mirza Ghulam Ahmad (peace be upon him).

His Holiness refuted the allegation that Islam was spread by the sword and used Quranic references to prove that Islam advocates universal religious freedom and tolerance. His Holiness also addressed the issue of freedom of expression and the refugee crisis afflicting Europe.

A number of dignitaries also took to the stage to welcome Hazrat Mirza Masroor Ahmad to Denmark and to express their support for the Ahmadiyya Muslim Community.

“The Ahmadiyya Muslim Community is a sect within Islam whose purpose and objectives are extremely clear. We seek to bring mankind towards its Creator – God Almighty. We seek to draw the attention of all people towards their responsibilities to their fellow man and the need to treat one another with love, compassion and respect. And we desire and seek to establish true and long-lasting peace in the world.”

“A charge that is often levelled at Islam is that it was spread violently by the sword. This allegation is completely unfounded and indeed nothing could be further from the truth. All of the wars fought during the life of the Holy Prophet (peace be upon him) and the four rightly guided Caliphs who succeeded him, were entirely defensive in nature, where war had been forced upon them.”

Referring to the false portrayal of the Holy Prophet of Islam (peace be upon him) amongst segments of the non-Muslim world, Hazrat Mirza Masroor Ahmad said:

The Head of the Ahmadiyya Muslim Community stated that during the era of the Holy Prophet (peace be upon him) and his four rightly guided successors (Caliphs) the rights of all people were protected regardless of religion or belief. 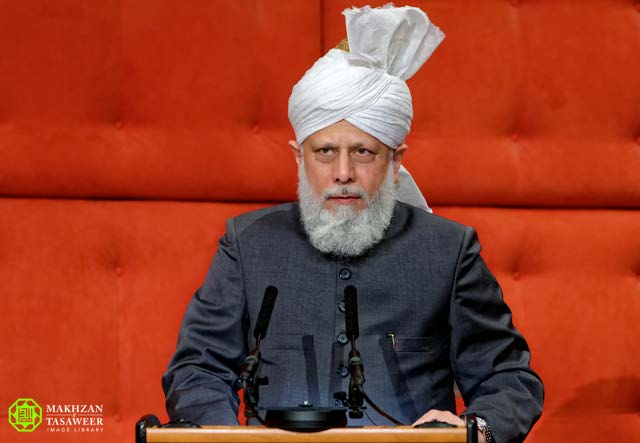 Citing the period of Hazrat Umar, the Second Khalifa (Caliph) of Islam, Hazrat Mirza Masroor Ahmad informed that the Christians of Syria preferred to live under Muslim rule as opposed to the Roman Empire, knowing full well that Muslims would uphold and protect their rights.

Hazrat Mirza Masroor Ahmad also spoke of how the Holy Prophet of Islam (peace be upon him) once rebuked a very close companion for offending the feelings of a Jew by claiming that the Founder of Islam was of a higher status to the Prophet Moses (peace be upon him).

“This teaching of the Holy Prophet (peace be upon him) was extremely profound and the basis for establishing peace between the people of different faiths and beliefs. However today, we see that in the name of freedom of expression, prophets and saintly figures are routinely mocked and ridiculed, even though there are millions of people who follow their teachings and who cannot bear to see them derided in this manner.”

“If we truly desire peace in the world, we need to think of the consequences of our words and deeds. We need to be respectful of the beliefs and values of others. This is the way to break down barriers and to knock down the walls of enmity and resentment that have been erected in so many parts of the world.”

During his address, His Holiness condemned all forms of terrorism and extremism as “hateful and wicked” and said that such acts had no link whatsoever to Islam’s teachings. His Holiness also condemned certain non-Muslim powers for adopting “unjust acts and policies”.

“Today, we are living at a time of increasing instability and uncertainty and so every person, in every part of the world, needs to take individual responsibility towards establishing peace. Conflicts continue to ignite and burn throughout the world and so let us not be in any doubt that the shadow of a fateful war looms before us.”

“Alliances and blocs are rapidly forming before our eyes and so it is my grave fear that we are charging madly towards a calamitous Third World War without pause for thought.”

“These days there is increasing fear and trepidation amongst the people of Europe due to the fact that so many refugees have entered this Continent over the past year.”

“The truth is that no single country, and in fact no continent, has the capability to absorb the millions of people who are fleeing their war-torn countries. Thus the only solution is to formulate a genuine framework for peace in their countries of origin and to try and bring an end to the cruelty in their homelands.”

“May we soon emerge from the bitter conflicts of today to a better and brighter future in which all nations and all groups are able to live side by side and in which a spirit of love, compassion and humanity prevails.”

Earlier in the evening a welcome address was given by the National President of the Ahmadiyya Muslim Community in Denmark, Mr Zakaria Khan, followed by various guests speeches. 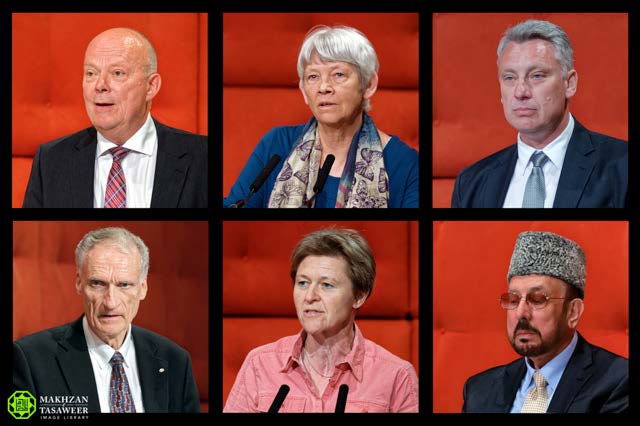 “As the Mayor of the constituency of Lolland it is a great honour to welcome Hazrat Mirza Masroor Ahmad to Denmark. It is always important to support those religious voices that speak of peace, tolerance and charity.”

“Your Holiness, Hazrat Mirza Masroor Ahmad is the voice in Islam who is talking about peace, talking about love, talking about unity. I have come here tonight to be inspired by your words so that I can carry them out in the world and make my small contribution to world peace.”

“I hope we will stay together in harmony and love. Love for All, Hatred for None!”

“I very much respect His Holiness (Hazrat Mirza Masroor Ahmad) for the way in which he promotes dialogue, peace, separation of religion and state and freedom of expression.”

“I would like to say that the Ahmadiyya Muslim Community is special in the way that all of your members are very well integrated into our Danish society. For the last 50 years we have enjoyed a history of peaceful and harmonic co-existence with you.”

The event concluded with a silent prayer led by His Holiness, Hazrat Mirza Masroor Ahmad. Both prior to and after the event, His Holiness personally met with various dignitaries and guests.