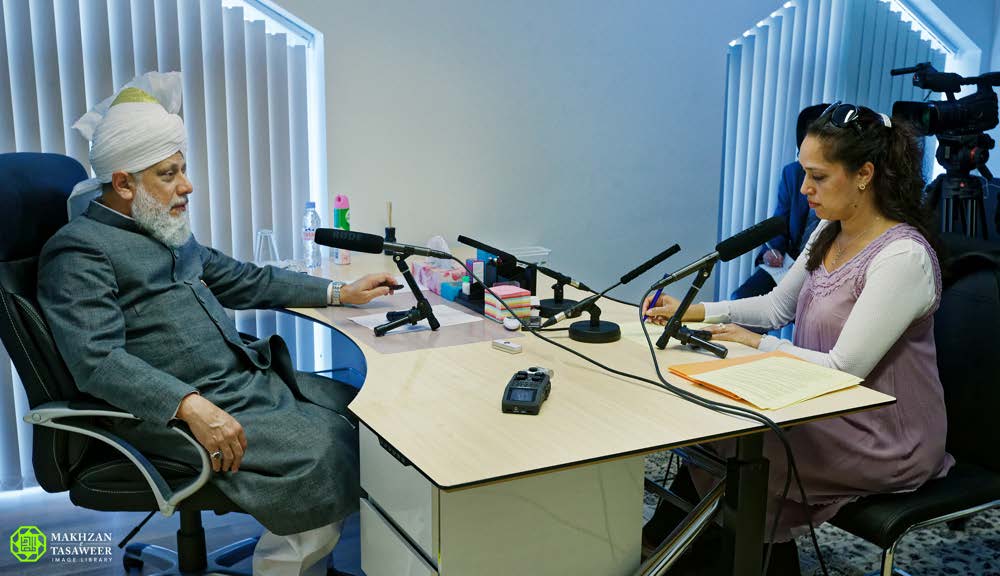 On 10 May 2016, the World Head of the Ahmadiyya Muslim Community, the Fifth Khalifa (Caliph), His Holiness, Hazrat Mirza Masroor Ahmad was interviewed by Denmark’s Radio 24syv (Radio 24Seven).

During the interview, which took place at the Nusrat Jahan Mosque in Copenhagen, His Holiness outlined the peaceful objectives of the Ahmadiyya Muslim Community and explained the theological differences between Ahmadi Muslims and other sects of Islam.

Upon being asked about the persecution faced by the Ahmadiyya Muslim Community in certain countries, Hazrat Mirza Masroor Ahmad said:

“Despite the opposition we face, each year hundreds of thousands of people are joining the Ahmadiyya Muslim Community. This is Allah’s work otherwise we could not have achieved such success during our 127 year history and so we are also hopeful and optimistic for the future.”

Asked about the Ahmadiyya Muslim Community’s well-known slogan of ‘Love for All, Hatred for None’, Hazrat Mirza Masroor Ahmad said:

“Our slogan of ‘Love for All, Hatred for None’ is based on the teachings of Islam because the Holy Quran says that people should love and care for each other and respect one another. The Quran says that you should be just and fair even with those who oppose you. Thus, Ahmadi Muslims are sympathetic and compassionate towards all of mankind.”

His Holiness also spoke about the increasing instability in the world and reiterated the need for mankind to recognise their Creator and for people to fulfil the rights of each other.