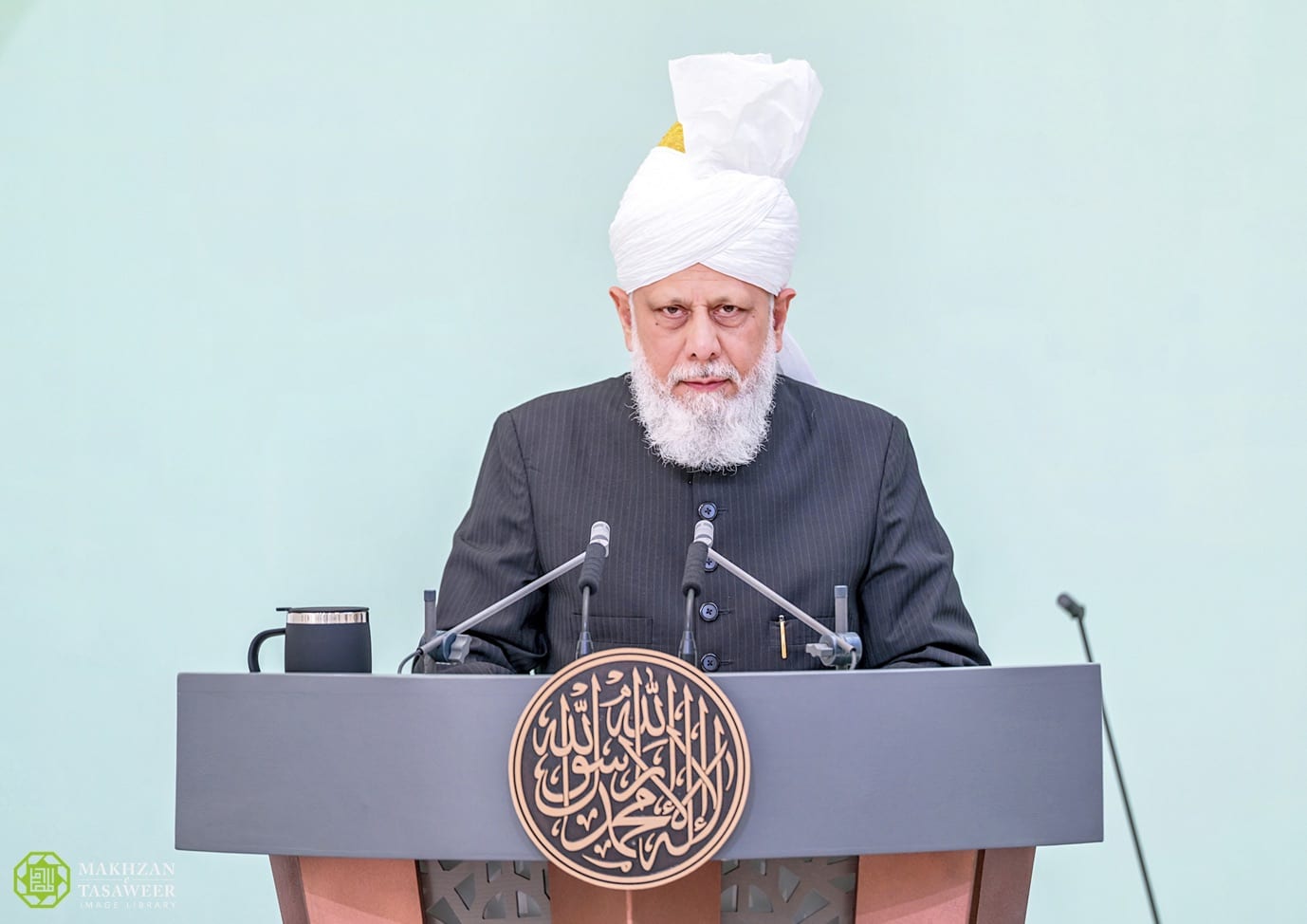 His Holiness said Ahmadi Muslims must learn lessons from Prophet Abraham (peace be upon him) and his family, whose sacrifices are marked on the day of Eid-ul-Adha

The World Head of the Ahmadiyya Muslim Community, the Fifth Khalifa (Caliph), His Holiness, Hazrat Mirza Masroor Ahmad, delivered the Eid-ul-Adha sermon on 31 July 2020 from the Mubarak Mosque in Islamabad, Tilford. 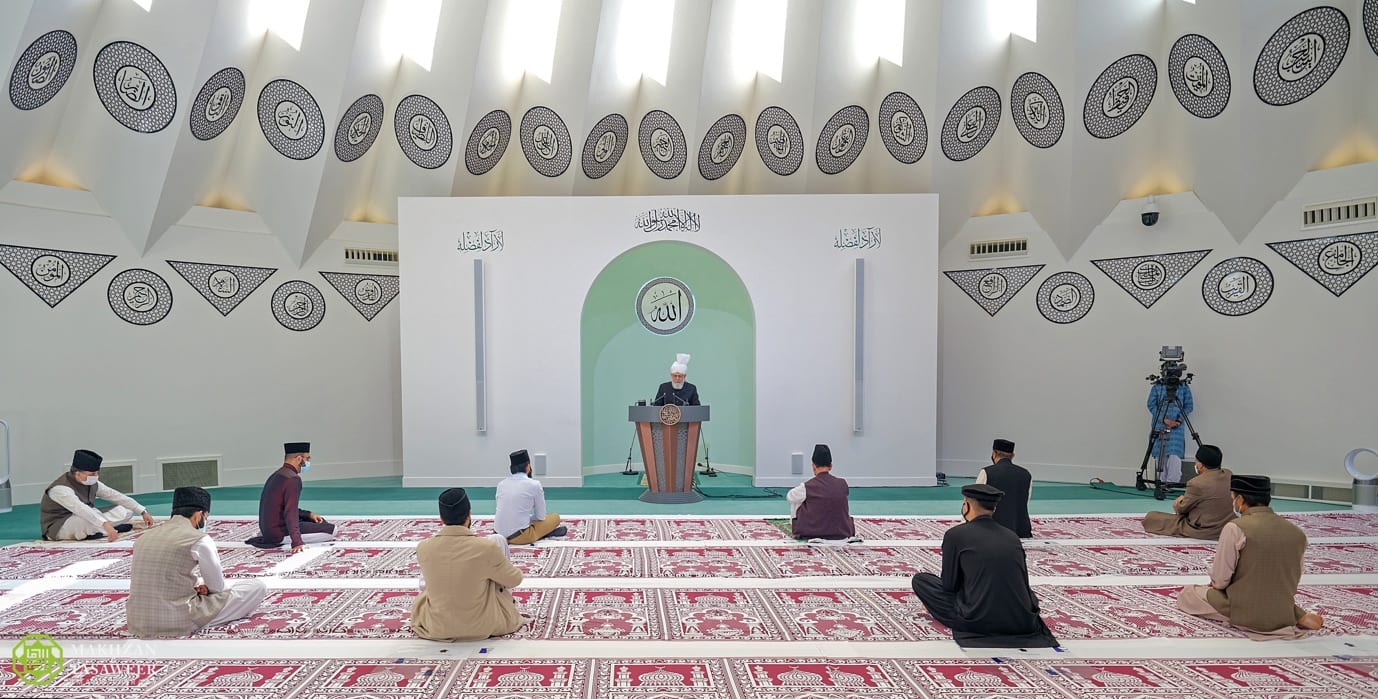 Only a few Ahmadi Muslims were able to offer the Eid prayer in the Mubarak Mosque due to social distancing rules, however across the world, millions of Ahmadi Muslims were able to listen live to the Eid Sermon of their Caliph and to join in with the silent prayer led by their spiritual leader through the global television channel MTA International.

During the sermon, His Holiness recounted the immense sacrifice of Prophet Abraham (peace be upon him) and his son Ismael, whereupon Prophet Abraham (peace be upon him) lay ready to sacrifice his own son Ismael for the sake of God Almighty and it was one which his son willingly assented. His Holiness said that this incident has been recorded in the Holy Quran and so would remain preserved for eternity as a timeless example of the very highest standard of sacrifice. 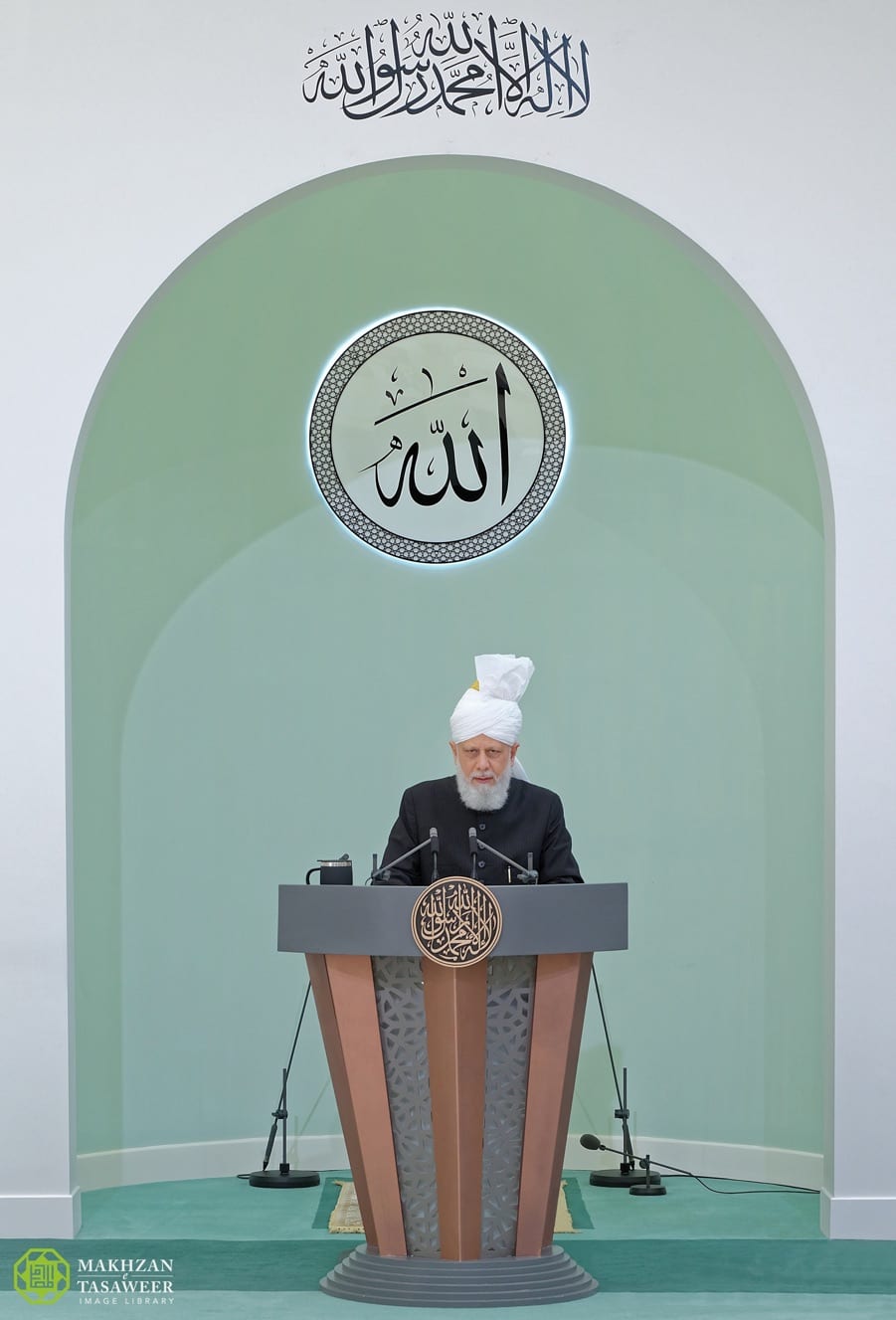 “There are countless number of people who mark this Eid and anticipate its arrival merely as a day of celebration and joy. They sacrifice an animal only to impress others and as an expression of joy. However a true believer recalls and learns from the sacrifice of Prophet Abraham and Ismael (peace be upon them) and its underlying spirit.”

“Certainly when we hear or read of their sacrifice, we cannot help but feel emotional and become tearful. However, that alone is not enough, rather we must analyse whether we ourselves are living up to our pledge that ‘I will be willing to make every sacrifice for the sake of God.’”

His Holiness said that God Almighty ultimately stopped Prophet Abraham (peace be upon him) from sacrificing his son and instead gave the glad tiding, narrated in the Holy Quran, chapter 37 verse 106, that:

“‘Thou hast indeed fulfilled the dream.’ Thus indeed do We reward those who do good.”

His Holiness narrated that on the instruction of Allah the Almighty, Prophet Abraham (peace be upon him) left his wife and son in the wilderness of Mecca with a few dates and some water. As she faced this trial, Hazrat Hajra enquired if her husband was leaving them on the command of Allah the Almighty. The Prophet Abraham (peace be upon him) replied in the affirmative.

Speaking of the incomparable reward that Allah the Almighty granted them in return for their sacrifices, Hazrat Mirza Masroor Ahmad said:

“History testifies to how Allah the Almighty rewarded the faith of Hazrat Hajra and so He did not forsake her or her son, rather in return, an incredible nation was born to them and they had the ultimate honour that a great prophet, the Seal of the Prophets, Muhammad, the Chosen One (peace and blessings be upon him) was raised from amongst them who became a Prophet for all mankind.”

Reflection upon the immeasurable sacrifices of the Prophet Abraham (peace be upon him) and his family, Hazrat Mirza Masroor Ahmad said:

His Holiness concluded his Eid Sermon by calling on Ahmadi Muslims to pray for all those who are facings struggles and hardship.

His Holiness instructed Ahmadi Muslims to fervently pray for those who are facing religious persecution in parts of Africa, across Pakistan and elsewhere. His Holiness mentioned how even the basic religious ritual of sacrificing an animal on the occasion of Eid-ul-Adha was a right that extremists sought to deny to Ahmadi Muslims living in Pakistan.

“Although it is the case every year, this time those who persecute us in Pakistan are especially focused on pressuring the authorities to file cases against Ahmadi Muslims seeking to fulfil the Islamic practice of sacrificing an animal on the occasion of this Eid. They are asserting that Ahmadi Muslims should be punished all because we seek to fulfil this Islamic duty. May Allah the Almighty save Ahmadi Muslims from the evils of such mischievous people.” 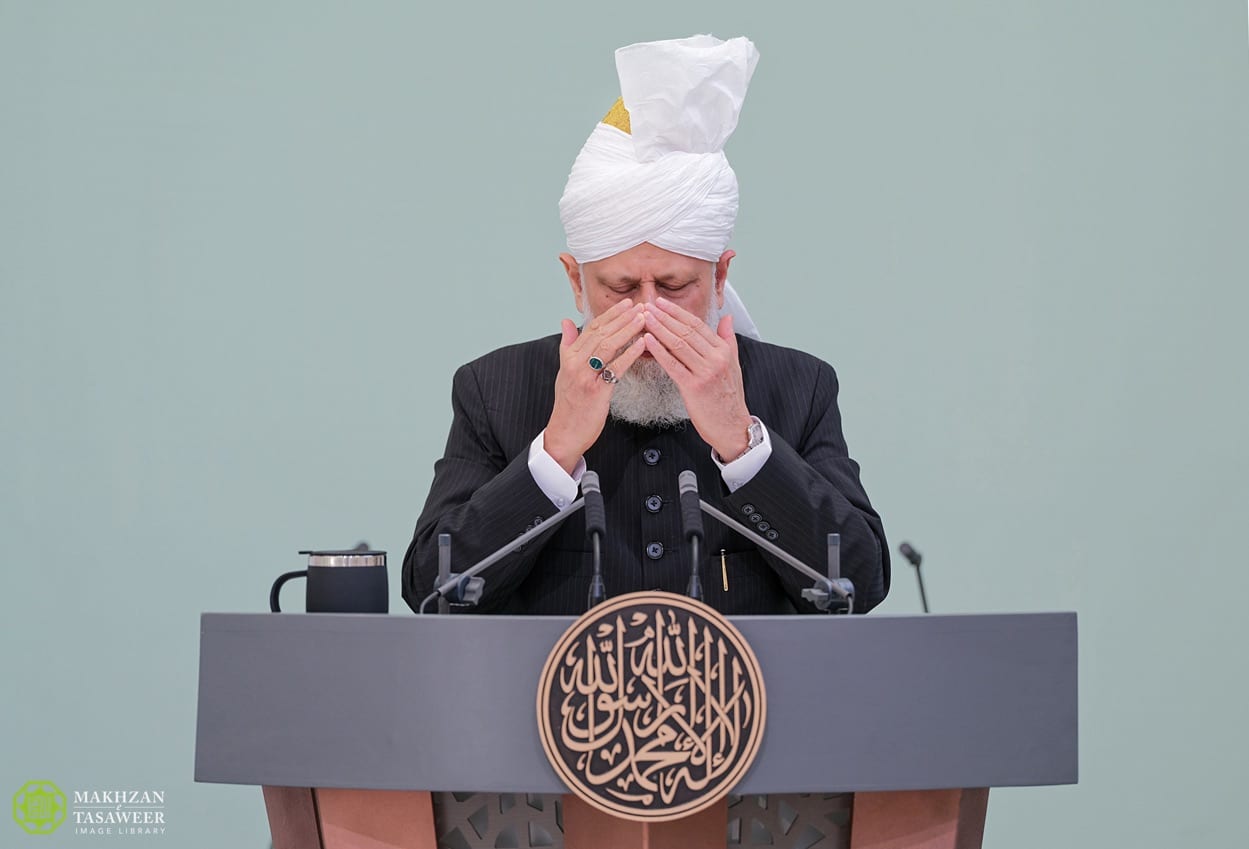 His Holiness concluded the sermon with a silent prayer.

As this year Eid-ul-Adha fell on a Friday, later His Holiness also delivered his weekly Friday Sermon from the Mubarak Mosque during which he spoke about a new law in Pakistan that required people to write ‘Seal of the Prophets’ after the name of the Holy Prophet Muhammad (peace and blessings be upon him).

“These people think they have accomplished a great feat by requiring people to write ‘Seal of the Prophets’ next to the name of the Holy Prophet (peace and blessings be upon him) and they feel that they have created some hurdles in the path of Ahmadi Muslims by doing so. They are ignorant of the truth because they do not realise that we Ahmadi Muslims are the ones who truly understand the unparalleled status of the ‘Seal of the Prophets’ (peace and blessings of Allah be upon him) and that we have attained this understanding through the teachings of the Promised Messiah (peace be upon him).”