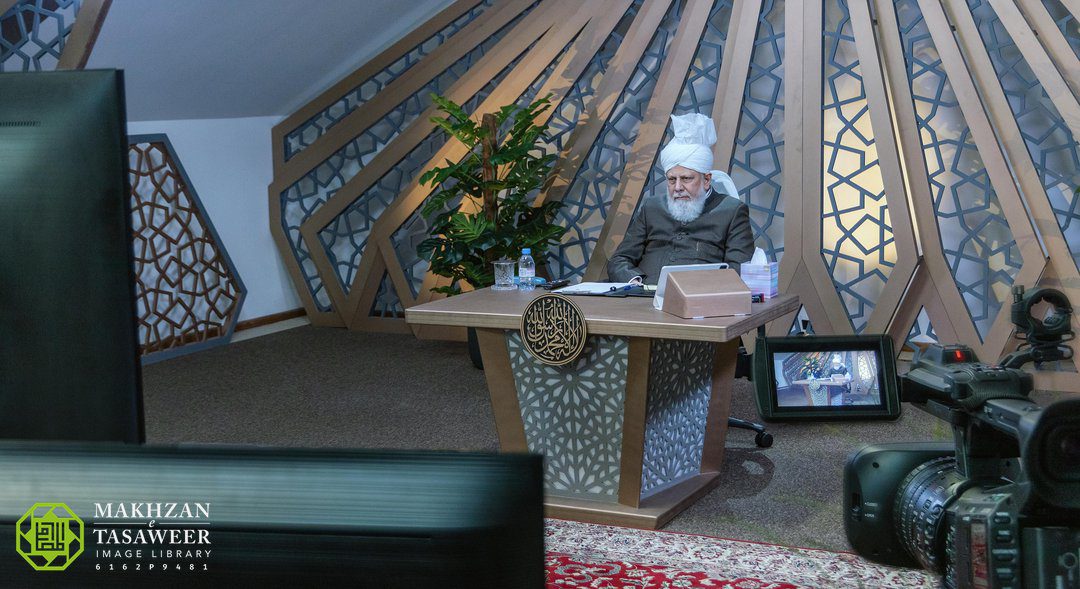 His Holiness presided the meeting from his office in Islamabad, Tilford, whilst over 400 higher education students attended from the Baitus Sabuh complex in Frankfurt, which serves as the National Headquarters of the Ahmadiyya Muslim Community in Germany.

Following a formal session starting with the recitation of the Holy Quran, the members of Lajna Imaillah had the opportunity to ask His Holiness a series of questions regarding their faith and contemporary issues. 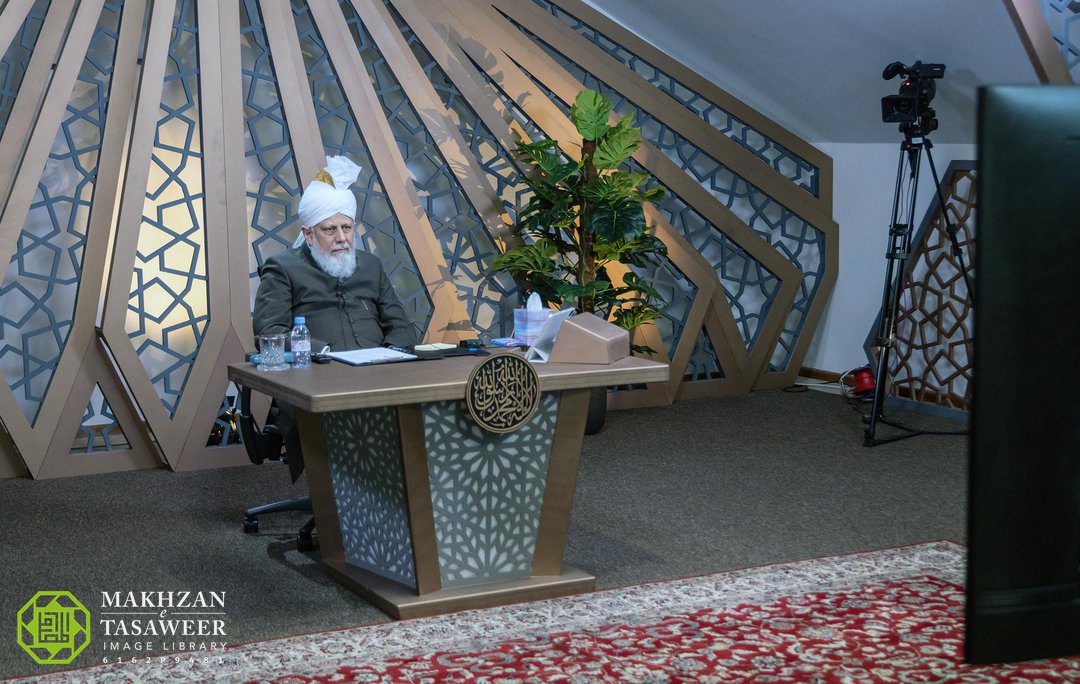 One of the students asked what should be done if the parents do not agree on whether to dedicate the lives of their children as part of the Waqf-e-Nau Scheme.

“It is essential that both parents are in full agreement before they dedicate their child for the Waqf-e-Nau scheme.  Otherwise, it will create conflict in the home and that will have a negative impact on the upbringing of the children. If only the mother or the father has a strong desire to dedicate their child, then they should carry out their upbringing in such a way that when the child grows older he or she decides themself to dedicate his or her life for the service of the faith. Remember, that to merely attain the title of Waqf-e-Nau and say that you have dedicated the child’s life as part of Waqf-e-Nau is of no benefit if the child does not pay attention to his studies and his prayers and does not focus on worshipping and seeking religious knowledge but instead spends his time loitering outside and makes friends with such people who do not have good morals or have no attachment to the faith.” His Holiness further outlined that a child spends most time with parents and so it should not be that the parents leave the religious and moral upbringing up to the Ahmadiyya Muslim Community and abandon all personal responsibility. Rather, as parents they must pay full heed towards their children’s religious and secular education.

“As I said, if both the parents do not agree upon offering their child as part of the Waqf-e-Nau scheme then whichever parent has the desire to make the child Waqf-e-Nau should carry out the child’s upbringing in such a way that the child grows to become a beautiful flower and a source of pleasant spiritual fragrance and an asset that is beneficial to the Ahmadiyya Muslim Community. He should grow and become able to do all this and then the child should himself or herself dedicate their life for the service of the faith.”

Another attendee enquired about the Islamic perspective on care homes for such children who are mistreated by their parents.

“If a child is sent into care then it is invariably the fault of the parents. Why do they inflict cruelties and injustices upon their children? They are sinful in the sight of God Almighty and are answerable to Him. A child is a gift, reward and a privilege bestowed by Allah the Almighty and so parents are duty-bound to care, nurture and protect their children in the best possible way. They should bring up their children with love and care… I have mentioned on many occasions that you should have a close bond of friendship with your children, you should be patient, listen to what they say, answer their questions and not mistreat them in any way, otherwise the children will go astray.”

His Holiness also mentioned that the social services cannot cater for the appropriate religious and moral upbringing of children under their care, and so they bring them up how they see fit. Thus, His Holiness said that the Ahmadiyya Muslim Community should assess if it was possible to open care homes for Ahmadi Muslim children who are mistreated by their parents so that their religious and secular needs can be looked after with sympathy and that once the issues are resolved, the children can be returned to their family homes.

Another student asked advice on what the right mind-set is when seeking or considering marriage proposals. “When a boy seeks out a marriage proposal, he should prioritise the morals and faith of the girl and so should a woman prioritise the same. I often say to the men that this instruction is not only for the women. Rather the men themselves also should have high moral standards and act upon their religious teachings. If the boy himself is not religious, then how will he find a religious girl and how will his attention be focused towards finding a girl who is religious? Thus, in this one sentence the Holy Prophet (peace ad blessings be upon him) has guided both men and women that they should prioritise faith over worldly matters when it comes to choosing a spouse.”

“This is why it is said that when you are praying for finding a match, you should pray that you are blessed with good fortune. Pray for such a husband who is religious, who is upright in his morals, who is well educated, who cares for you, who treats you lovingly and is trustworthy. Seek protection from such people who cheat you… Even when you are praying, you should pray in the right way. Do not only pray for someone who is good looking or has a lot of wealth, rather pray that Allah the Almighty makes you of good fortune. When you are of good fortune, it will mean you will attain all forms of goodness.”

A question also related to what should be taught in schools as part of Islamic studies.

Shedding light upon the subject, His Holiness emphasised that those aspects should be taught which are common amongst the different sects and smaller aspects of dispute should not be delved into.

“Those things which are common are the major and clear teachings of the Holy Quran. Belief in the Holy Prophet (peace and blessings be upon him) is compulsory and those sayings of the Holy Prophet Muhammad (peace ad blessings be upon him) which are well established, we must act upon them and many of those aspects are common amongst the different groups. And so, focus on those commonalities. You do not need to delve into controversial matters and opposing schools of thought – where there are differences…”

“You do not need to go into the differences of opinion on the jurisprudential matters between sects. These are separate debates [to what should be taught in schools]. Yes, it can be told that one school of thought believes this and the other believes something else. However, the foundational teachings are the same, that Allah is One, the Holy Prophet Muhammad (peace and blessings be upon him) is the Seal of the Prophets and the Holy Quran is the Last Book.”