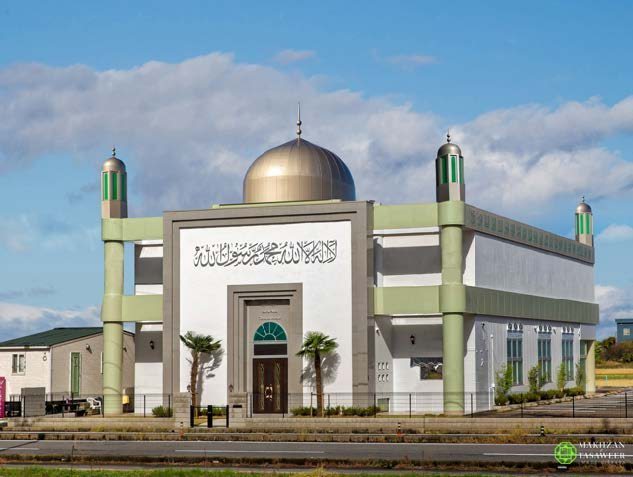 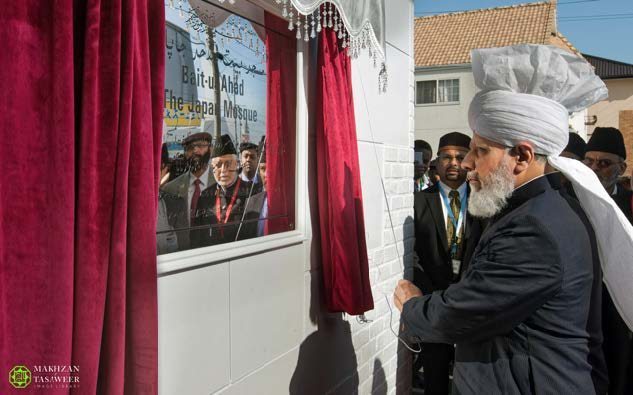 His Holiness arrived at the premises at 1pm local time and after unveiling a commemorative plaque he proceeded to deliver his weekly Friday Sermon. The sermon was broadcast live around the world on MTA International.

During his sermon, His Holiness highlighted the true purpose of a Mosque and emphasised the need for the local Ahmadi Muslims to attain the highest possible moral and spiritual standards.

“Now this Mosque has been built it is essential that you discharge your responsibilities and duties in gratitude to Allah the Almighty. Merely to say ‘All praise be to Allah’ because we have accepted the Promised Messiah (peace be upon him) or because we are Ahmadi Muslims is not enough. Thus you should worship here each day and seek to improve your moral standards and conduct and to spread the true teachings of Islam throughout this nation.”

“The spread of the true teachings of Islam demands the highest standards of worship. It demands people who forego bloodshed and cruelty and instead strive towards a Jihad of self-reformation and improvement. Regrettably, the Muslims of today are becoming ever more extreme to the extent that some claim to serve Islam through the brutal and merciless killings of innocent people.” 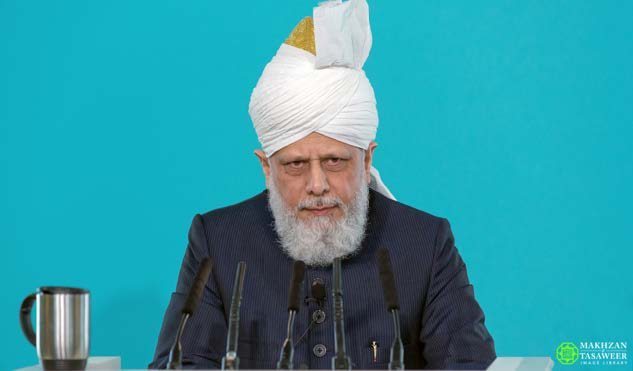 His Holiness categorically condemned the recent Paris terrorist attacks and said the perpetrators had served only to unjustly defame the name of Islam.

“The recent terrorist attacks in Paris can only be described as despicable and barbaric. Such attacks are entirely against the teachings of Islam and so it is the heavy responsibility of Ahmadi Muslims to spread the true and peaceful teachings of Islam.”

His Holiness said that Allah the Almighty had given the Ahmadi Muslims living in Japan the opportunity to live their lives in peace and prosperity and had granted them the religious freedom they did not have in Pakistan.

“You should reflect upon the blessings God has manifested upon you as a result of living here. There are no restrictions upon your worship. You are not imprisoned for referring to your Mosques as ‘Mosques’. Rather than resulting in a prison sentence, your salutations of ‘peace’ are appreciated and welcomed in this nation.”

Continuing, His Holiness said it was incumbent upon the local Ahmadi Muslims to present the true face of Islam in Japan, as was the stated desire of the Promised Messiah (peace be upon him).

“Does this freedom you have here in Japan not demand a pious and moral reformation within you? Does it not demand that you forego your selfish desires and seek the pleasure of God Almighty? Does it not require that you exhibit love and compassion amongst yourselves and spread it in the society you live in?”

Concluding, Hazrat Mirza Masroor Ahmad presented details of the Mosque itself and its construction. His Holiness said there were times when it seemed that gaining planning permission from the local authorities would not be possible, however Allah the Almighty removed such obstacles.

His Holiness praised the financial sacrifices of local Ahmadi Muslim men, women and children for the sake of the construction of the Mosque and also praised the local non-Muslim community for their support and kindness.

Baitul Ahad is the largest Mosque in Japan accommodating up to 800 worshippers (main prayer area, terrace and halls). The building lies on a main road in Nagoya, has excellent transport links, accommodation facilities, offices and a library.