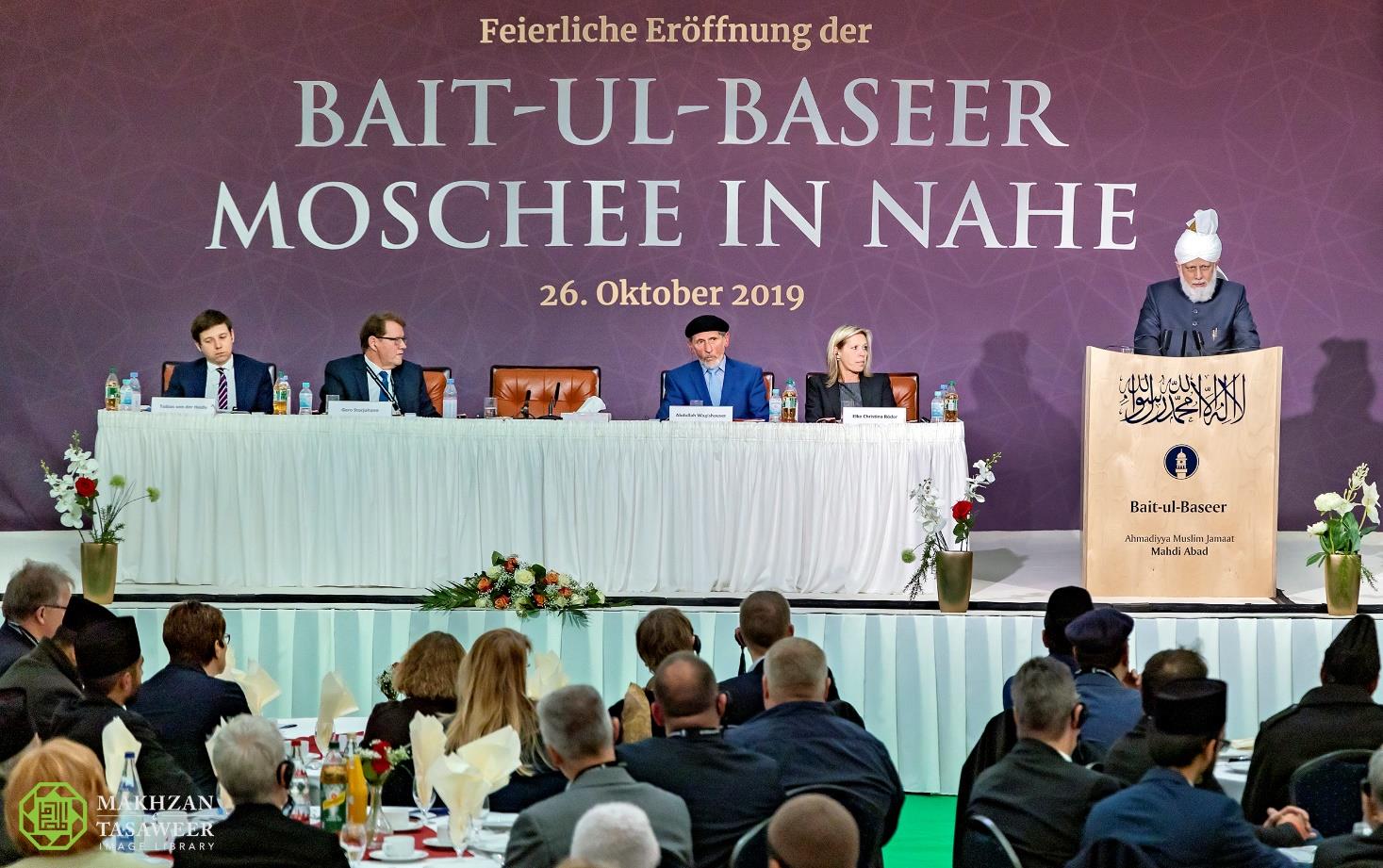 Focusing on what unites us, rather than what divides us is key to fostering peace in world – Head of Ahmadiyya Muslim Community

On 26th October 2019, the World Head of the Ahmadiyya Muslim Community, the Fifth Khalifa (Caliph), His Holiness, Hazrat Mirza Masroor Ahmad delivered the keynote address at a special reception held to commemorate the opening of the Baitul Baseer Mosque at the Mahdi Abad complex in Nahe, Germany. His Holiness had officially inaugurated the Mosque a day earlier with his weekly Friday Sermon.

The reception was attended by more than 145 guests, including politicians, faith leaders, media representatives and local residents.

The highlight of the event was the keynote address delivered by Hazrat Mirza Masroor Ahmad during which he explained the true purposes of mosques and highlighted the vital importance of the peaceful co-existence of different communities and races.

During his address, His Holiness spoke about the importance of upholding high moral values and fostering a spirit of mutual respect within society.

“The National President of the Ahmadiyya Muslim Community in Germany mentioned earlier that this Mosque has been built in a small village. Whether a place is a village, a small town or a densely populated city is irrelevant. What truly distinguishes a place is the moral character of the people who live there and how they live and interact with other people.” 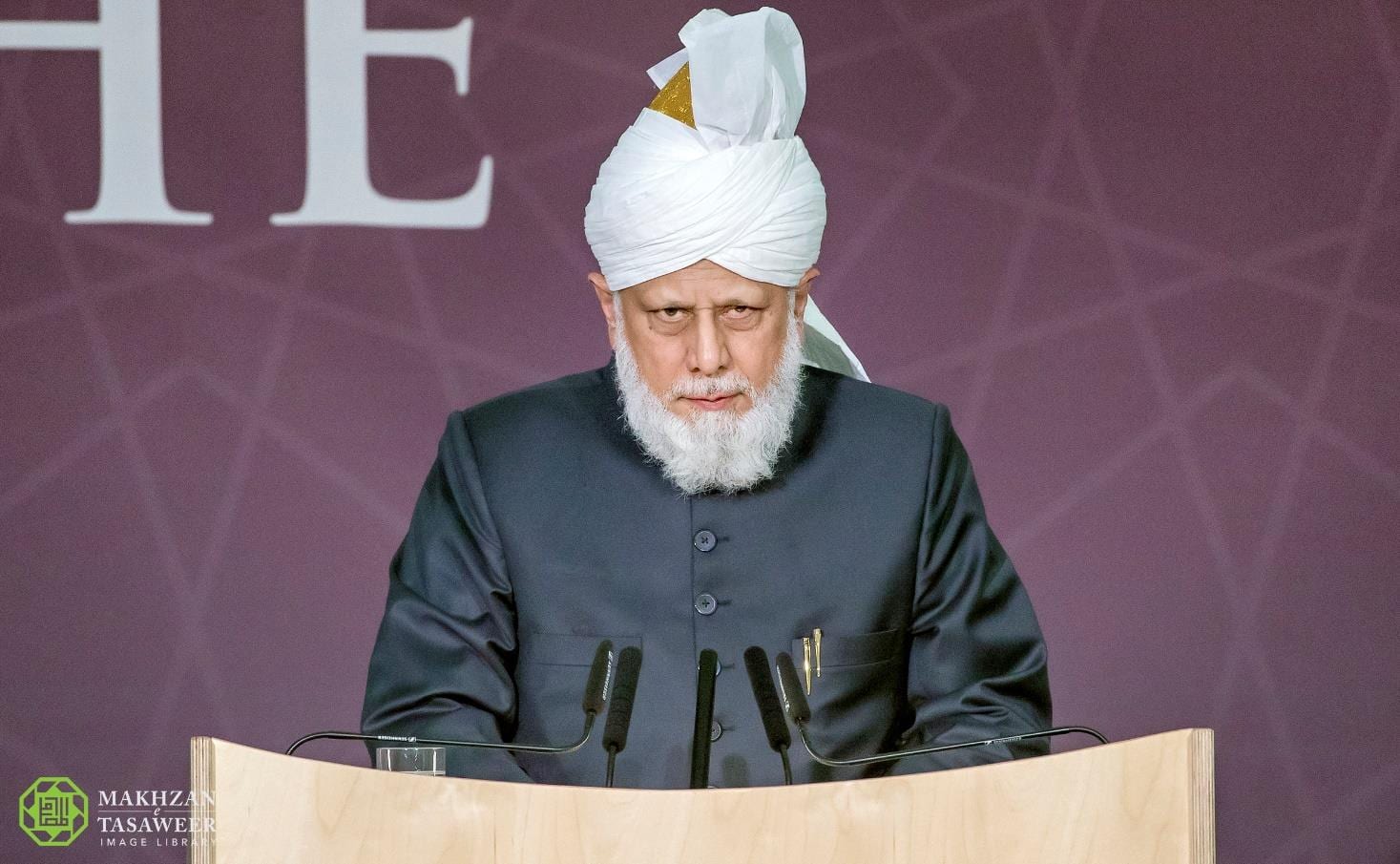 His Holiness spoke about extremism and how the acts of so-called Muslims had caused fear and suspicion of Islam to arise in many non-Muslim countries.

“Much is said against Islam and people hold many fears and reservations about it. However, if we look at the history of Islam, we see that the claim that Muslims are people who spread hatred and perpetrate terrorism is a completely false and unjust assertion.”

“After he claimed to be a Prophet of God, the Holy Prophet of Islam (peace and blessings be upon him) and his followers spent 13 years in Mecca whilst facing severe and relentless persecution. The opponents of Islam were unremitting in their brutal efforts to hurt and target the early Muslims. The Muslims were tortured and killed but continued to manifest patience. Ultimately they were forced to migrate to Medina. There, an Islamic Government was established in which the rights of all communities were preserved and protected. According to the covenant that was formed all people were guaranteed freedom of belief and were able to live freely according to their religious scriptures.”

His Holiness further elaborated upon the life of the Founder of Islam, the Holy Prophet Muhammad (peace and blessings be upon him) and explained how the Holy Quran has instructed its followers to uphold religious freedom for all people.

“The first commandment mentioned in the Holy Quran regarding the permission to fight a defensive war stipulates that war is being permitted because the aggressors oppose religious freedom. It further mentions that had there been not been a strong response to the injustice no Synagogue, Church, any other place of worship, or Mosque would remain safe.”

“In this verse, we see that a Mosque is not mentioned first, rather it is mentioned last. This further indicates that the permission for self-defence given to the early Muslims was given in order to ensure that every religion was safeguarded. Moreover, if any war in the early period of Islam is studied and examined with justice, it becomes clear it was because the Muslims were being attacked, tortured and persecuted.”

His Holiness explained how the teachings of Islam have laid great emphasis on the rights of neighbours and the term ‘neighbour’ in Islam covered a wide scope of people including work colleagues, fellow travellers and all those who lived in one’s proximity.

“The founder of Islam, the Holy Prophet (peace and blessings be upon him), said that Allah the Almighty emphasised the rights of one’s neighbours to him so repeatedly that he thought that perhaps a ‘neighbour’ would become one of the rightful heirs of a person’s inheritance. This is the great status and importance of a neighbour according to Islam.”

His Holiness spoke about women rights in Islam and how it required for all girls to be educated. Furthermore, Islam was the first religion to give women the right to inheritance and instructed men to be kind, respectful and gentle to women.

‘paradise lies under the feet of mothers’.

His Holiness said that women nurtured the future generations of society and so had been given this unique status by Islam.

His Holiness said that the very first chapter of the Holy Quran states that Allah the Almighty is Lord of All the Worlds. Thus, Muslims believe that God provides for all people, irrespective of their faith or beliefs and so mutual respect amongst all people was a basic prerequisite.

His Holiness then spoke of the importance of inter-faith dialogue and building mutual respect between different communities.

“One way to reduce conflict in the world is to focus on the commonalities that unite us, as opposed to the differences we have. The Holy Quran has instructed Muslims to call People of the Book and others to that which is common amongst them. The Holy Quran does not tell people to scrutinize one another’s differences, rather, it speaks about looking at that which is common between people. That uniting factor amongst different religions is a belief in the One God.”

“If we understand this point and truly worship One God and work to fulfil His rights and acknowledge that every living being has been created by Him then there will be no religious, cultural or other forms of conflict.”

His Holiness further said that living by the law of the land and respecting the people who reside within it was incumbent upon every Muslim.

“The Holy Prophet (peace and blessings be upon him) said that ‘loyalty to one’s country is part of one’s faith’. Therefore, in whichever country we reside, abiding by its laws, living respectfully with the inhabitants, exhibiting good morals, expressing religious freedom and tolerance, showing patience and forbearance, are all extremely important so that peace can be maintained within the country and maintaining peace within the country is part of our faith.”

Before the keynote address, the attendees heard from the National President of the Ahmadiyya Muslim Community in Germany, Abdullah Wagishauser.

He spoke about the history of the Ahmadiyya Muslim Community in Germany and the Baitul Baseer Mosque project.

Thereafter a number of guest speakers took to the stage. 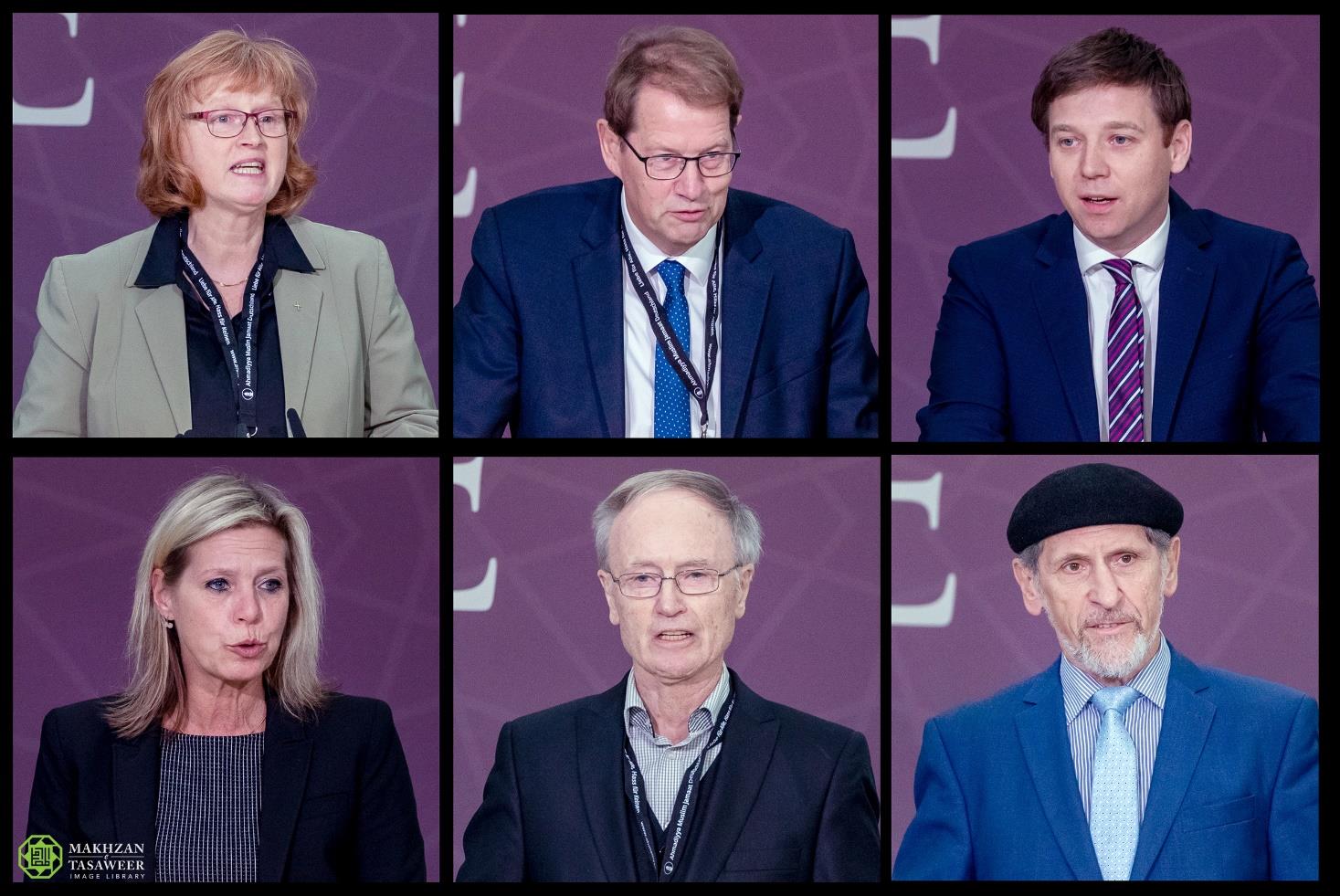 “I was here when the Ahmadiyya Muslim Community first purchased this complex in Nahe in 1989 and I saw the banner of ‘Love for All, Hatred for None’ that you immediately displayed and, at the time, I thought that this banner is a means of deception and not genuine. However, over time, the local Ahmadi Muslims have removed all my fears and worries and I have seen that you have made every possible effort to integrate and to foster peace. All of us who live in this area have seen that you are open people, loyal citizens and good neighbours. Hence, today is an emotional day not only for you but also for my wife and I and we join in wholeheartedly with your celebrations and joy at the opening of the new Mosque. Certainly, you have lived up to the slogan of ‘Love for All, Hatred for None’.”

“On behalf of the Protestant Church, I congratulate you on the opening of this Mosque. We feel pleasure whenever a House of God is opened and I pray that it proves blessed for you.”

“We have a saying in German that what takes a long time leads to good results and I am confident the same will be true with this Mosque. Over a long period of time, the Ahmadiyya Muslim Community has proven that its members contribute to the city in which they live and fulfil their duties as citizens. Extremists desire to create distance between people and so it is important that we do not let them succeed and instead we seek to unify and live together with a spirit of true religious freedom and tolerance.”

“What a beautiful day today is! The values of the Ahmadiyya Muslim Community are of humanity, mercy and peace. You believe in a separation of religion and politics and you value freedom of belief and freedom of conscience. In reality, you have shown that Islam belongs in Germany!”

“Today, is a day of great happiness as a House of God is being opened here. The new Mosque is very beautiful and is a sign of the religious freedom that we greatly value. Tolerance is necessary for any society to thrive and so we are very happy that you now have a place where you can worship according to your traditions and beliefs.”