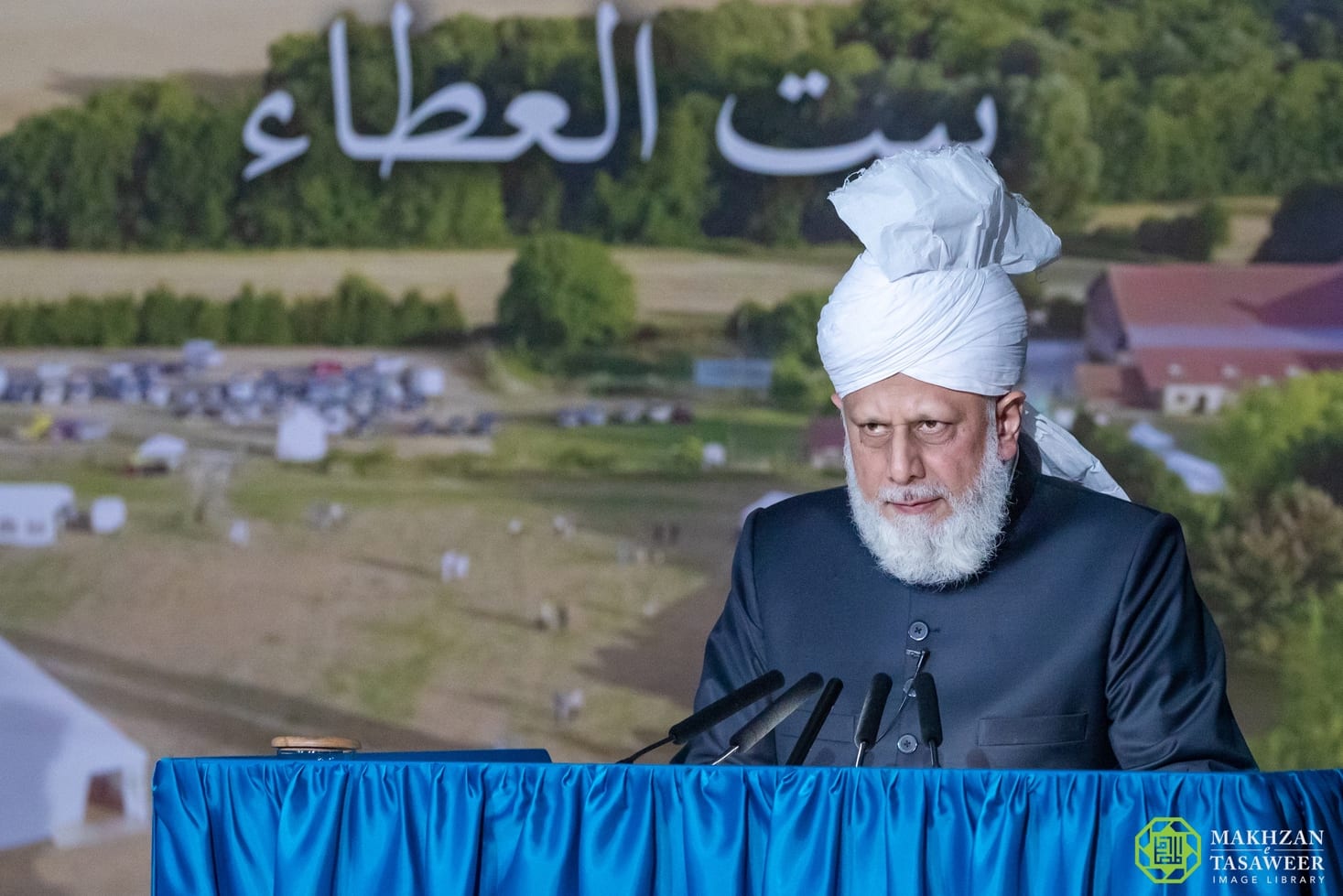 During his address, Hazrat Mirza Masroor Ahmad spoke about how the teachings of Islam safeguard the rights and freedoms of all people and how by acting upon these teachings lasting peace in society can be achieved.

His Holiness also outlined the far-reaching consequences of modern-day conflict and warfare and said that peace had not been achieved due to a lack of objectivity and fairness on the part of various nations and groups. Rather, they continued to pursue outcomes only

‘in their own best interest’.

After welcoming and thanking the guests, Hazrat Mirza Masroor Ahmad spoke about the barrage of atrocious attacks that have marred recent history.

“In recent years, the horrific and brutal atrocities of certain so-called Muslim groups have caused immeasurable levels of pain and anguish in different countries, including here in France. Such attacks can only be condemned in the strongest possible terms and our prayers and sympathies are always with the victims of such heinous crimes.”

His Holiness went on to explain that these barbaric attacks are in utter contradiction with the fundamental teachings of Islam.

In this regard Hazrat Mirza Masroor Ahmad said:

“The true teachings of Islam have nothing to do with terrorism and extremism. Rather, Islam is a religion of peace, love, tolerance and reconciliation.”

“The word ‘Islam’ literally means ‘peace’ and ‘security’ and so a true Muslim is a person who is himself peaceful and who strives to establish peace and harmony in the world.”

His Holiness explained to those in attendance, about the philosophy of the Islamic greeting of ‘salam’and its application in wider society.

“Muslims are instructed to greet other people, be they Muslims or non-Muslims, with the words ‘Assalamo Alaikum’ which mean ‘Peace be upon you’. This Islamic greeting is a gesture of goodwill conveying peace and security to the recipient.”

“It simply cannot be that our faith teaches us to receive every person with a message of peace and security, and at the same time, it requires us to usurp their rights, to oppose them or violently take up arms against them. It is impossible that Islam could have such contradictory teachings.”

Giving examples from the life of the Holy Prophet Muhammad (peace and blessings of God be upon him) and his companions, His Holiness shone light on the patience, forbearance and peace-ensuring principles taught by Islam.

“To understand the true nature of Islam, it is important to reflect upon the time of the Founder of Islam, the Holy Prophet Muhammad (peace and blessings of Allah be upon him). When he claimed to be a Prophet of God, he and his followers were subjected to relentless and barbaric persecution.”

“The Prophet of Islam (peace and blessings be upon him) withstood the inhumane treatment and the unrelenting injustices with unparalleled levels of patience and fortitude and counselled his followers to do the same. He neither instructed them to retaliate and nor did he invite his other followers to come and fight back against the non-Muslims. Rather, he called on his followers to remain peaceful, even if it meant they lost their lives, and he reassured them that their reward lay in the Hereafter in the loving arms of Allah the Almighty.”

‘sought not only the elimination of Islam, but…sought to destroy the institution of religion itself.’

Commenting further on the philosophy and purpose of war in Islam, His Holiness said:

“When the Holy Prophet of Islam (peace and blessings be upon him) and his followers were forced to partake in wars and battles it was for the sake of defending the rights of all people. It was to ensure that Christians, Jews, Hindus, Muslims and the people of other faiths and beliefs had the right to worship as they pleased.”

Describing the principles of

‘cornerstones of the Islamic faith’,

Hazrat Mirza Masroor Ahmad explained that these teachings have been eternally preserved in Chapter 2, verse 257 of the Holy Quran which states:

‘There should be no compulsion in religion’.

“What a clear and unequivocal statement in defence of freedom of thought, freedom of religion and freedom of conscience. At every moment of his life, the Holy Prophet Muhammad (peace and blessings be upon him) sought peace and promoted inter-faith dialogue, mutual understanding and respect between the people of different communities.”

His Holiness also gave the example of the ‘Treaty of Medina’ which took place between the Muslims and the Jews, to demonstrate Islam’s historic commitment to societal peace and harmony.

“Under the terms of the Treaty of Medina, all people were free to practice their traditions and beliefs. That society was bound together by one overriding principle that, irrespective of their religious beliefs, all members of society were duty-bound to be loyal citizens of the State and to refrain from all activities that could undermine the peace and security of society.”

“Terrorists who commit suicide bombings, attack nightclubs, concert halls or stadiums or manically drive vehicles into members of the public are all guilty of violating the teachings of Islam in the most ghastly and barbaric fashion.”

His Holiness also spoke about Islam’s many guiding principles for day-to-day life. Among such teachings, His Holiness mentioned the principles of fair-trading, honesty and justice.

“Islam teaches that unfair dealing and unjust trading weakens the unity within society and destroys its peace.”

“Certainly, at a time when so much of the world’s disorder and suffering, both at an individual and a collective level, is based upon selfishness and greed, the principles of equity and justice are crucial to maintaining peace within society.” 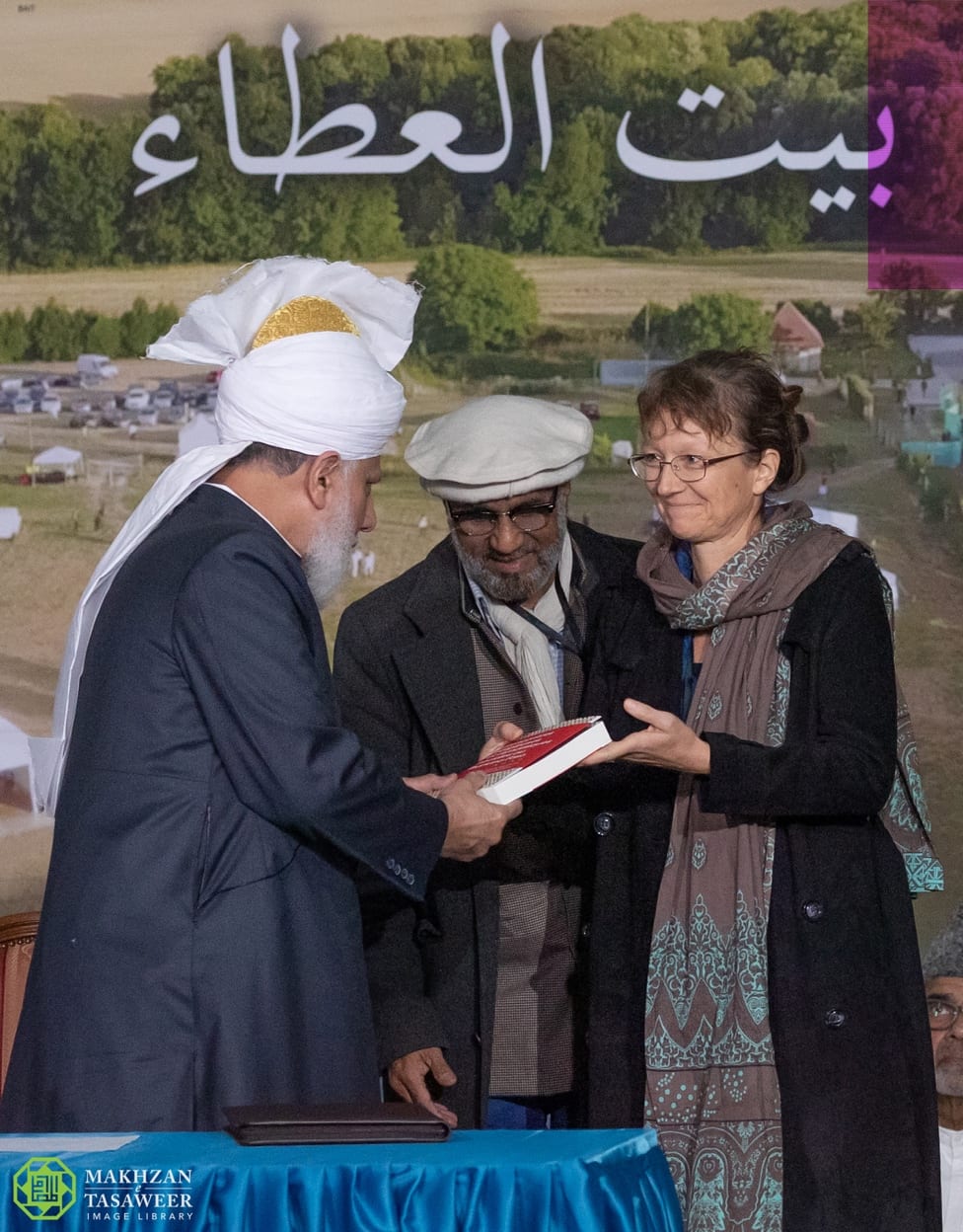 Another principle of the Holy Quran mentioned by His Holiness was with regards to international relations and internal conflicts.

“The Islamic focus is always on establishing sustainable peace and eliminating enmities and rivalries. For example, chapter 49, verse 10 of the Holy Quran states that if two parties or nations are in conflict then their neighbours or neutral parties should seek to bring about reconciliation through mediation and negotiations.”

“Those who intervene must remain impartial, rather than trying to settle the outcome in their own best interest. If peace cannot be established through dialogue, or if any party subsequently violates the terms of a negotiated settlement, then the other nations should unite against whosoever is perpetrating injustice and use force to stop them.”

Elaborating on this point, His Holiness explained that once an aggressor is stopped, they should not be further humiliated but rather supported and helped

‘in the interests of fairness and long-term peace’.

‘a means of stabilising the world and developing lasting peace’.

Having spoken about how certain dominant countries in the world had perpetrated cruelty and injustice in the name of peace, His Holiness gave a solemn and stark warning.

“In both the East and the West, the blue skies of peace and prosperity have given way to heavy clouds of war and injustice. Across much of the world, nations are being torn apart by dissension, revenge-seeking and a desire to degrade others.”

“This state of unrest will continue to increase, until and unless, international relations are based upon justice and integrity and fulfilling the rights of others.”

His Holiness urged for people to learn from their past in order to better their future.

“As I observe the world today, I can only pray that mankind does not continue to repeat the mistakes of the past. Instead, let us learn from history, so we can build a better future for ourselves and for our coming generations.”

Hazrat Mirza Masroor Ahmad warned that if a nuclear war were to ever break out, its consequences would be beyond imagination.

“We will not just be destroying the world as we know it but will be ensuring that we leave behind the most horrific and devastating legacy for our children.”

“I pray from the depths of my heart that may the people of the world join together for the common good and work with a spirit of unity and foster mutual trust and understanding. Instead of blaming religion or pointing the finger at one another, let us focus all our energies on ensuring peace and leaving behind a safer world for those who follow us.”

“Let it be that our future generations come to remember us with love and affection, rather than with hate and resentment. May every person and every nation come to fulfil the rights of one another and may justice and compassion prevail over all forms of injustice and conflict. Ameen.”

Immediately, after His Holiness launched the French edition of the Review of Religions website.

Earlier in the day, His Holiness, Hazrat Mirza Masroor Ahmad directly addressed the members of Lajna Imaillah (The Ladies Auxiliary Organisation of the Ahmadiyya Muslim Community).

His Holiness reminded members of the community to emulate the examples of the companions of the Holy Prophet Muhammad (peace and blessings of Allah be upon him) in order to safeguard both themselves and future generations from the multitude of social ills of modern society.

“Nowadays the world is rapidly growing distant from God the Almighty. A huge number of people are not just moving away from religion, but in fact now deny the existence of God as well. Living in this environment where materialistic gains are seen as the be all and end all, some from among us also become influenced by it, including elders, children and the youth. In such circumstances we have a great responsibility to be mindful of our own states, and to safeguard both ourselves from the effects of this environment as well as our children.” 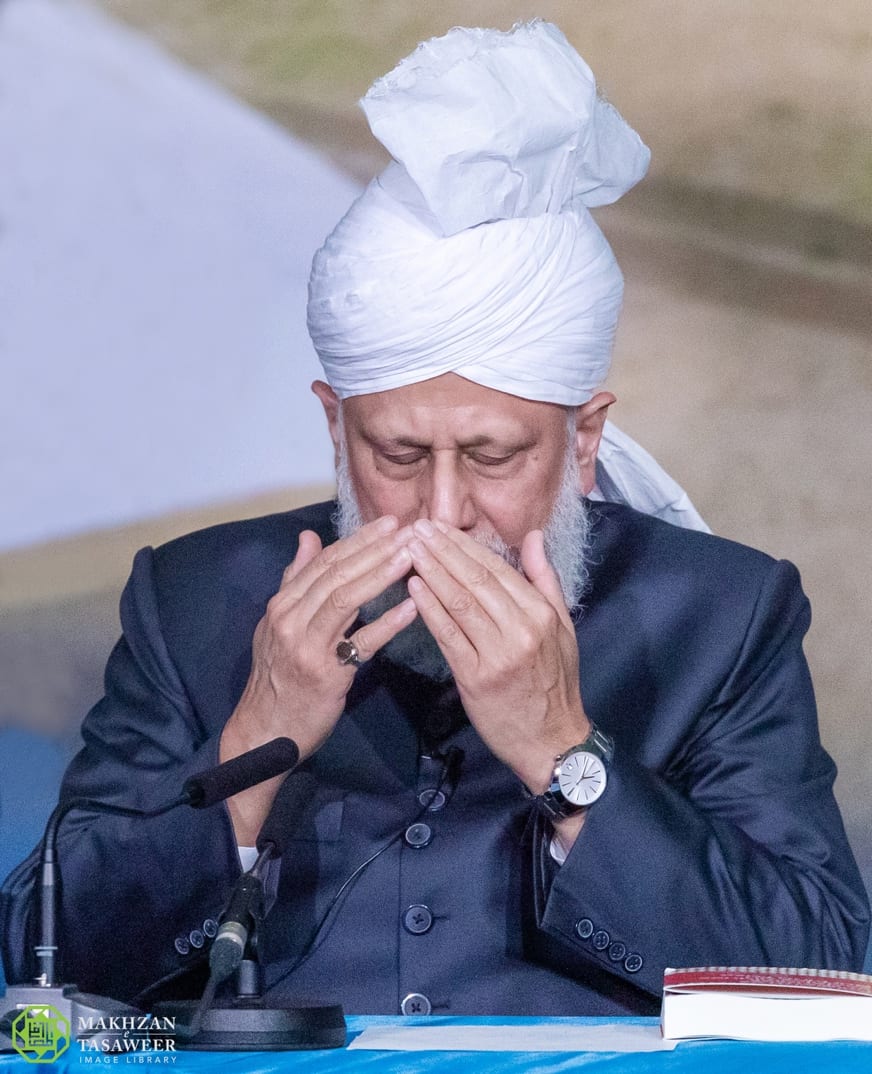