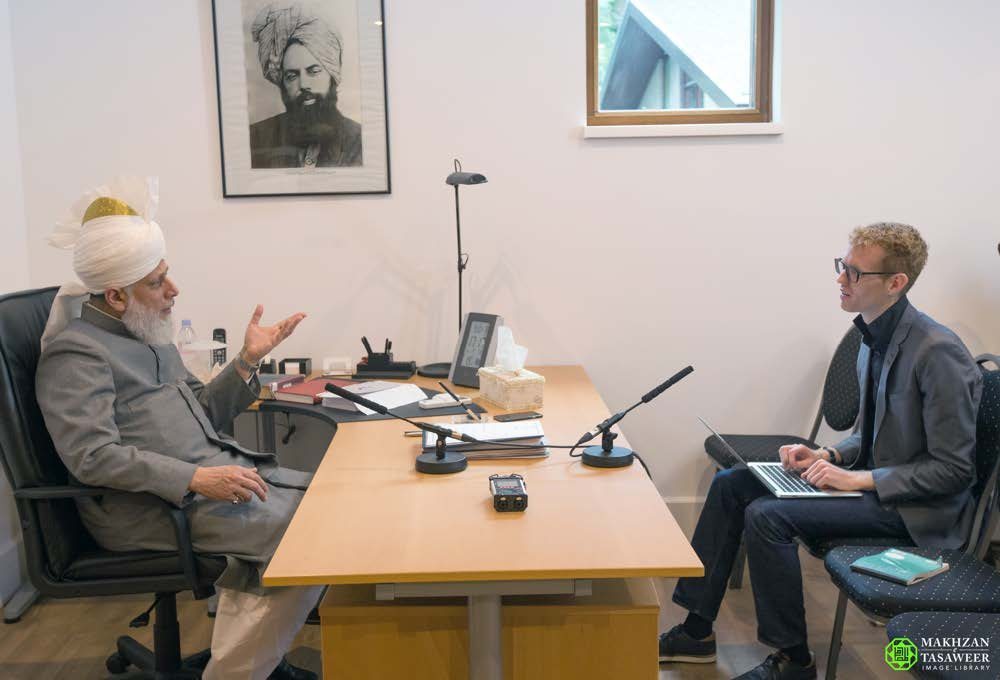 On 9 October 2015, the World Head of the Ahmadiyya Muslim Community, the Fifth Khalifa (Caliph), His Holiness, Hazrat Mirza Masroor Ahmad was interviewed by the Dutch media outlet De Correspondent at the Baitun Noor Mosque complex in Nunspeet, Holland.

Upon being asked if the Iraq War of 2003 was an attack on Islam, Hazrat Mirza Masroor Ahmad said it was a “geo-political” war rather than a religious war.

Asked about his views on the terrorist group known as I.S. or Daesh, Hazrat Mirza Masroor Ahmad said:

“Such groups like Daesh are interpreting the Holy Quran in completely the wrong way. Jihad actually means to struggle for something good but the terrorists are making their own violent interpretations just to feed their own vested interests.”

His Holiness said that context was key to understanding the Holy Quran and so when seeking to interpret any particular verse it was necessary to read what was written before and after.

Asked how to combat terrorism, His Holiness said that it was essential to cut the arms supply lines of terrorist groups and to end their sources of funding and means of black market trading.

to combat the influence of extremist clerics in their countries.

Regarding, the continued efforts of the Ahmadiyya Muslim Community to spread the peaceful message of Islam, Hazrat Mirza Masroor Ahmad said:

“We will never give up and we will never become frustrated. Rather, we shall continue with our missionary work and we believe that one day change will come. If not this generation, then in coming generations people will come to realise the truth of Islam.”

Upon being asked if he was optimistic about peace emerging in the Middle East, His Holiness said that the signs were not currently hopeful and there was a risk of the war escalating still further. Thus, he said he was “not optimistic” in the short-term but hoped that eventually people would realise their mistakes and turn towards God Almighty.