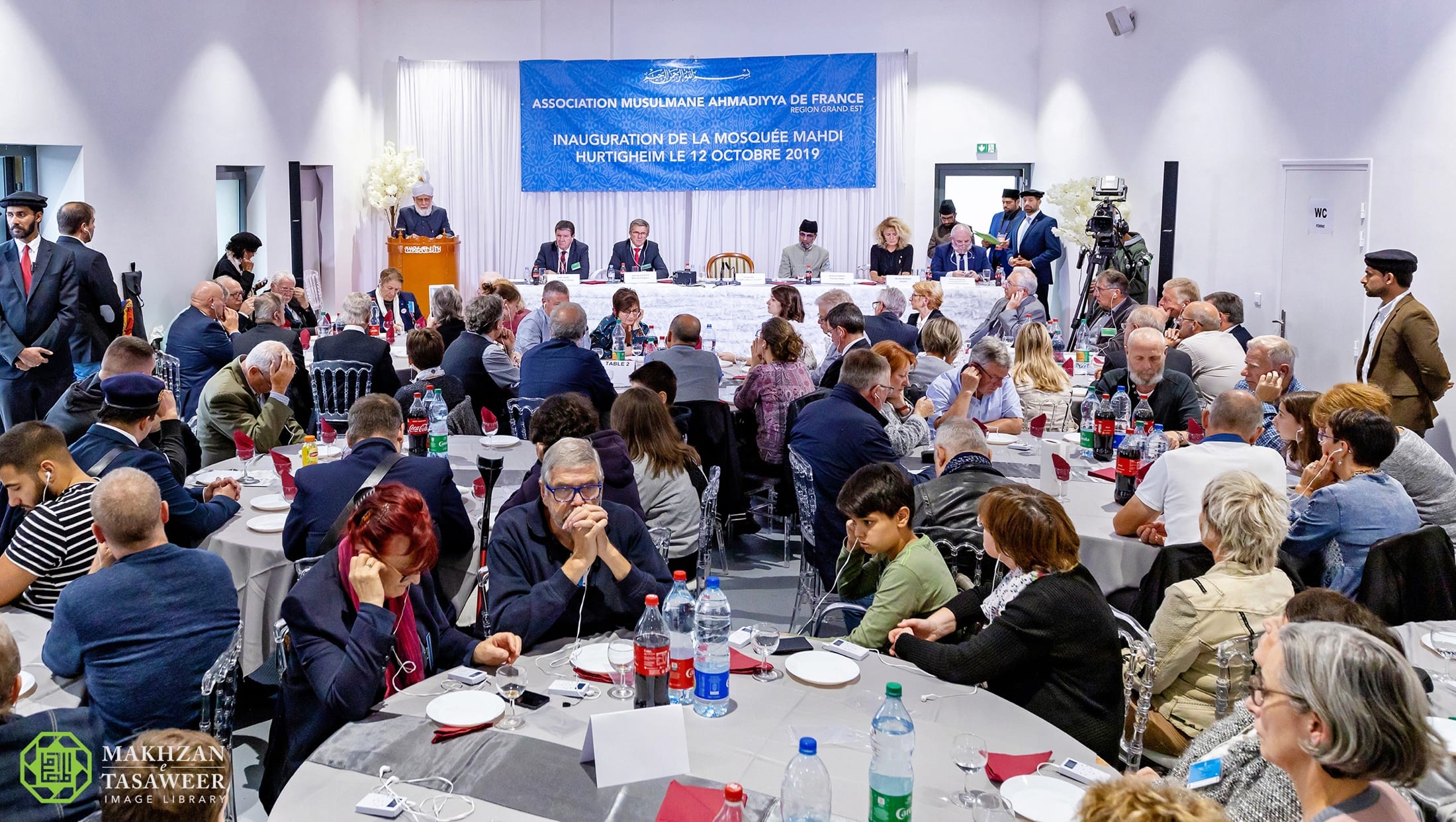 As the world moves ever closer to a catastrophic Third World War, veterans of World War Two stand to salute the Vanguard of Peace

Following the opening of the Mahdi Mosque in Strasbourg on 11 October 2019, the World Head of the Ahmadiyya Muslim Community, the Fifth Khalifa (Caliph), Hazrat Mirza Masroor Ahmad graced the inaugural reception held to mark the occasion on 12th October 2019.

The reception, held in a multi-purpose hall at the Mosque complex, was attended by over 150 dignitaries and local residents.

The event started as 10 fully uniformed veterans from Strasbourg, including those who had observed first-hand the horrors of the Second World War, stood to salute His Holiness, Hazrat Mirza Masroor Ahmad, as he strode through the raised standards of their respective battalions.

Surely those who had stood on the front lines, who had bravely fought in the battlefields and who had seen their comrades succumb in the cause of freedom, knew only too well the value of the warnings given repeatedly by His Holiness about the risks of a Third World War. 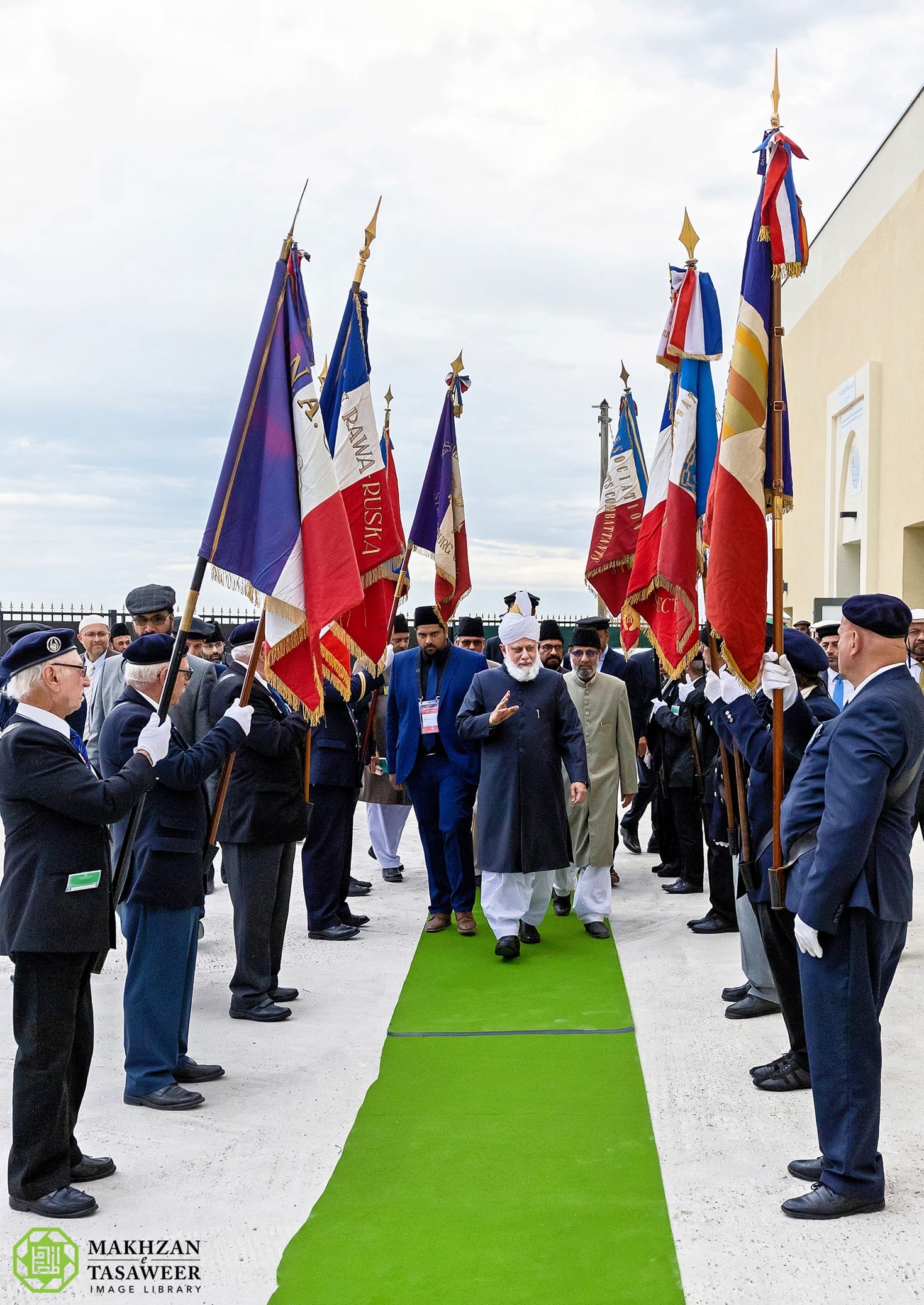 The highlight of the event was the keynote speech delivered by Hazrat Mirza Masroor Ahmad in which His Holiness explained the true purpose of Mosques and highlighted the importance of fulfilling the rights of mankind in light of the teachings of Islam.

His Holiness started his address by thanking all the guests for attending the event.

“First and foremost, I would like to thank all the guests that have come here today to attend this religious function of the Ahmadiyya Muslim Community – the inauguration of our new Mosque. It seems, from the speeches of our respected guests that they initially had certain reservations and feared that the arrival of Muslims would cause problems, yet these concerns have subsided as they gradually came to realise there was nothing to fear.”

“There is a widespread and false perception in the non-Muslim world that mosques are centres of dissent and disorder. However, this is completely wrong. In reality, a mosque is a place of worship, a place where Muslims congregate and worship the One God in the same way that all religions have a designated place for worship.”

Due to the fact that many assumptions and stereotypes about Muslims stem from a misunderstanding of Islam and the wars which took place in Islamic history, His Holiness expounded on the context and purpose of those conflicts and explained the reasoning behind them. 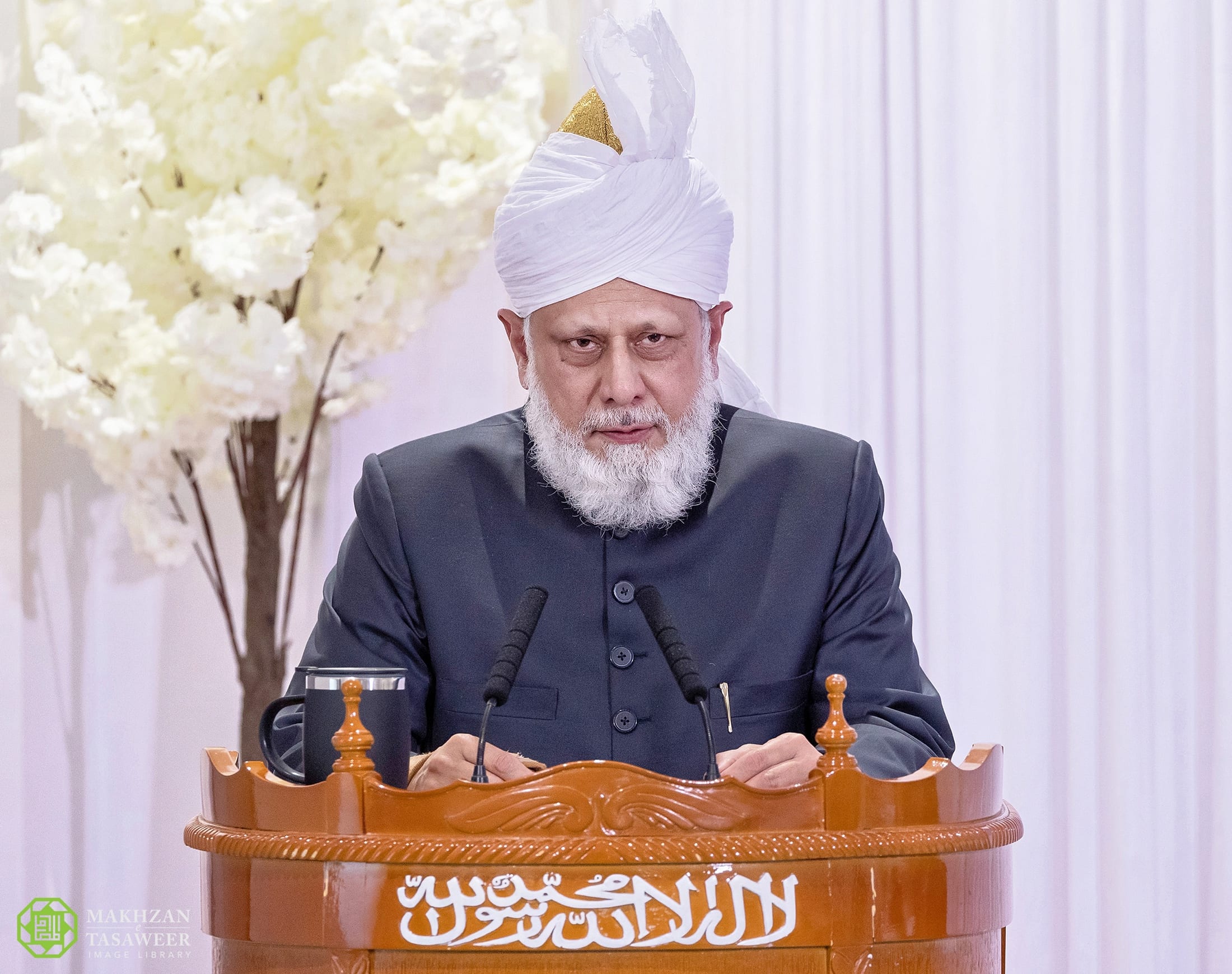 His Holiness said that the Holy Prophet Muhammad (peace and blessings be upon him) and his companions endured extreme persecution for 13 years due to their religious beliefs before permission to fight back defensively was given and this too was for the sake of upholding universal freedom of religion.

“The Holy Qur’an categorically states that if the aggressors had not been stopped then neither synagogues, churches, temples nor any mosques would remain. In other words, within this one commandment, where permission was granted to fight against the disbelievers, it enjoined the protection of all religions.”

Speaking about Islamic history, His Holiness explained that even on the battlefield, Muslims were given specific instructions to ensure the least possible damage and the establishment of peace.

“The Holy Prophet (peace and blessings be upon him) and his four rightly guided Caliphs would command their troops that no church or place of worship should be destroyed, no woman should be hurt, no child should be hurt. So much so that even the priests of the church and other religious leaders should not be troubled nor should any tree be cut down or any crop be destroyed.”

Having explained this, Hazrat Mirza Masroor Ahmad said, that if in today certain Muslims had forgotten these teachings, and had begun to commit injustices, then

‘those Muslims and their actions are to blame, not the teachings of Islam’.

His Holiness said that the wars and conflicts of modern history had no basis in Islam and that society should learn lessons from the horrific mistakes of the past as opposed to laying the blame for the world’s problems at the feet of Islam.

“A Western writer from America has explicitly mentioned in her book that ‘during the wars of the era of the Holy Prophet (peace and blessings be upon him) the number of people that were killed number only a few hundred or possibly a thousand. Whereas during World War I and World War 2 hundreds of thousands of people were killed from a single bomb. So modern and conflicts wars have not been fought for the Muslims to propagate their religion but have been fought as a result of worldly greed and with material aims and so are, in reality, ‘geopolitical wars’.”

His Holiness explained that wherever the Ahmadiyya Muslim Community builds a mosque, its members endeavour to be a force for good in society.

“By the grace of Allah the Almighty, we have a large Ahmadiyya Muslim Community in Africa, where we also build many mosques. Alongside this, motivated solely by our Islamic faith, our community has established many humanitarian projects, such as the opening of schools, hospitals, water pumps and wells and providing other facilities as well.”

His Holiness explained that the motto of ‘Love for All Hatred for None’ is not just an empty slogan but something that Ahmadi Muslims endeavour to live by.

“Wherever the Ahmadiyya Muslim Community goes, it takes with it a message of peace. If we raise the slogan of ‘Love for all Hatred for none’, as has been mentioned just now by some of the esteemed speakers in their speeches, then we also live by it as well. The way to do this, is to serve mankind.”

“Where true Muslims fulfil the rights of God by worshipping Him, their hearts will also be filled with the realisation that the same God who instructs us to worship Him, also instructs in the Holy Quran for us to serve mankind. In fact, the Holy Quran goes as far as to say that the prayers of such worshippers who fail to fulfil the rights of people, who do not serve mankind, who do not feed the orphans, who do not care for the poor or needy, or who commit injustices, are of no benefit, and in fact are a means of their destruction.”

His Holiness concluded his address by speaking directly to the local residents.

“If you continue to harbour any doubts, worries or reservations about the presence of Ahmadi Muslims here and the fact that we have built a mosque here, then rest assured that God willing, we will never be a source of any disruption. Rather we will support you, care for you and will abide by the laws of this land. Moreover, we will propagate and manifest the same true and peaceful teachings of Islam that were shown and taught to us by the Holy Prophet Muhammad (peace and blessings be upon him) and explained to us by the Holy Quran.”

Before the keynote address, attendees heard from the National President of the Ahmadiyya Muslim Community France, Mr Ashfaq Rabbani, the Local Secretary of External Affairsfor the Ahmadiyya Community in Strasbourg, Mr Athar Kahloon, as well as from several guest speakers.

“Ladies and gentleman, three years ago was the foundation ceremony for this mosque and I said that I was a bit hesitant regarding the building of this mosque, yet now I am joyful after the opening of the mosque. Many people who do not know your community, ask why you are opening this mosque and why we have given you this permission to build a mosque… Your motto is ‘Love for all, Hatred for none’ and you are promoting that brotherhood that we no longer see in our society nowadays.”

“It is a great honour for me to be present among you for the inauguration of the first mosque in our region. I wold like to add here that in the beginning I was not in favour of the construction of this mosque, but when I heard that your motto is ‘Love for all, Hatred for none’ I changed my mind. There is not enough of this philosophy in today’s society which is full of violence, so why not have more of this philosophy when we see violence and racism in society? Why not follow this philosophy when everyone is seeking their own rights but forget that they must also help others? Why not follow this philosophy when we are seeing egotism everywhere? We must rethink our society again and reinvent the way we think. We have to seek tolerance and brotherhood and love. You are combatting violence and promoting love, generosity and brotherhood and you are giving to the next generation and contributing to this society and helping its members. I wish you all the best.”

“We wish friendship between all members of this society whatever their political leaning or religion. I would like to congratulate you on this big (mosque) project.”

“Your Holiness Hazrat Mirza Masroor Ahmad, I would like to congratulate you on the opening of the mosque today in the French republic. It is a great and symbolic action that gives us a lot of hope. I wanted to be present today and would like to thank the Ahmadiyya Muslim Community for their invitation.”

The formal session concluded with a silent prayer led by His Holiness. 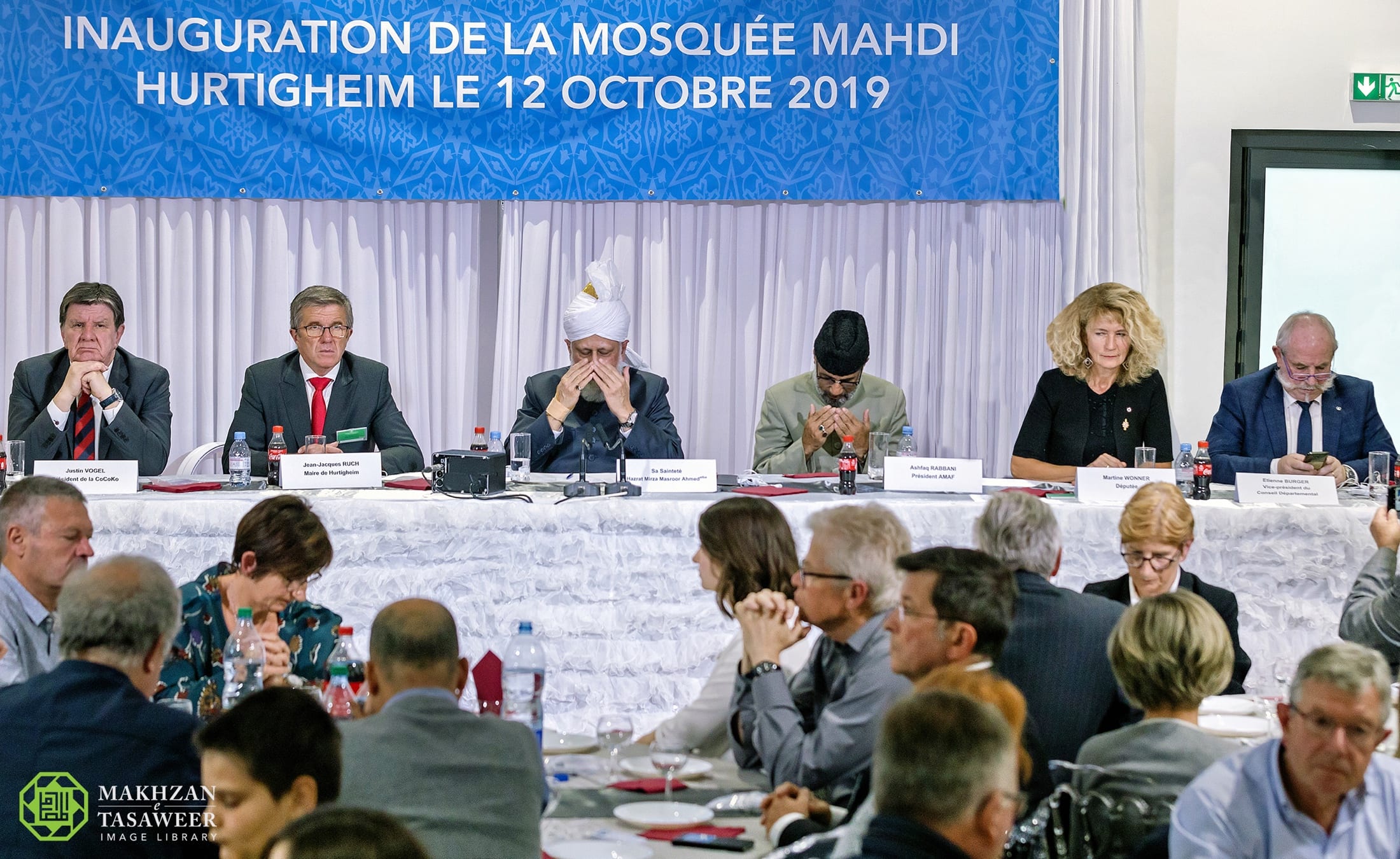