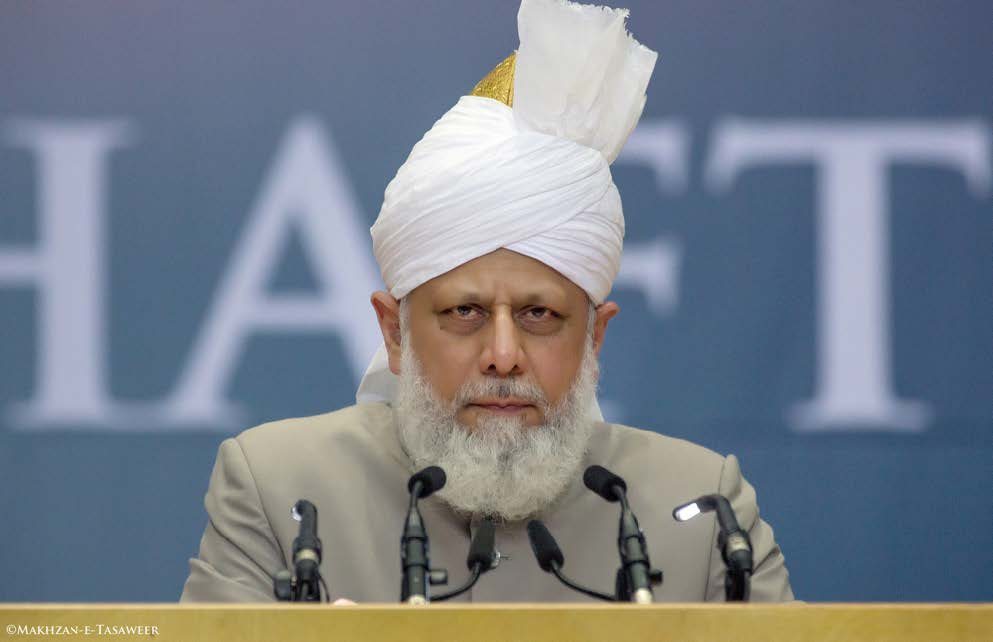 On Saturday 6 June 2015, the World Head of the Ahmadiyya Muslim Community, the Fifth Khalifa, His Holiness, Hazrat Mirza Masroor Ahmad addressed an audience of more than 1,000 non-Ahmadi guests on the second day of the 40th Annual Convention (Jalsa Salana) of the Ahmadiyya Muslim Community in Germany. His Holiness quoted extensively from the Holy Quran to disprove allegations that Islam advocates extremism or violence of any kind.

Hazrat Mirza Masroor Ahmad began his address by stating that the efforts of the Founder of Islam, the Holy Prophet Muhammad (peace be upon him) towards establishing peace in the world were “incomparable”.

“Through his enlightened teachings the Holy Prophet of Islam (peace be upon him) has handed us the golden keys to peace… He said that for true peace to be established mankind had to recognise its Creator.”

Hazrat Mirza Masroor Ahmad said that in this era the Founder of the Ahmadiyya Muslim Community, His Holiness, Hazrat Mirza Ghulam Ahmad of Qadian (peace be upon him) was sent by Allah the Almighty to revive the true and peaceful teachings of Islam.

“During his life the Promised Messiah (peace be upon him) shone an illuminating light upon true Islam and presented its magnificent teachings to the world. He proved that the Holy Prophet (peace be upon him) was indeed the greatest champion and torch-bearer for peace in the history of mankind.”

The Khalifa said that those who sought to defame and discredit Islam had taken the wars fought during early Islam completely out of context.

“Permission for (defensive) war was given to the early Muslims in chapter 22, verse 40 of the Holy Quran where Allah said He was granting permission because war had been forced upon the Muslims, and so they had been left with no choice but to respond and to defend themselves.”

“Today, according to the promises of God Almighty, it is the Ahmadiyya Muslim Community alone that is enlightening the world with the true teachings of Islam.”

“Whilst today Islam continues to be portrayed in entirely the wrong way, we Ahmadi Muslims do not become hopeless or disheartened. We firmly believe that we will be successful and so one day Islam’s reality will dawn upon the world and its beautiful teachings will be understood by the people of all nations.”

Earlier in the day, His Holiness, Hazrat Mirza Masroor Ahmad directly addressed the members of the Lajna Imaillah (Ladies Auxiliary Organisation) in which he spoke of the importance of obedience to the Holy Quran and to the Holy Prophet Muhammad (peace be upon him).