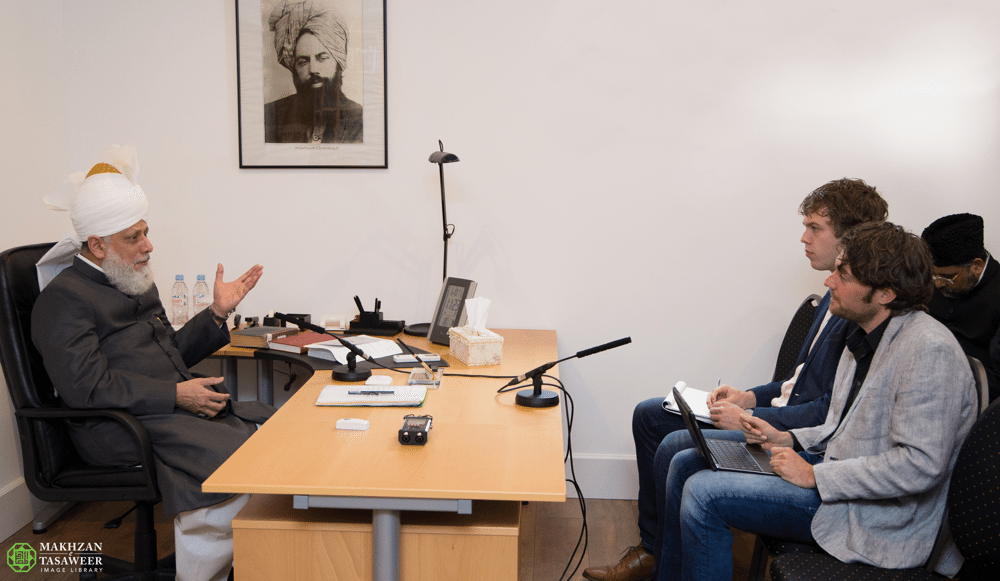 On 6 October 2015, the World Head of the Ahmadiyya Muslim Community, the Fifth Khalifa (Caliph), His Holiness, Hazrat Mirza Masroor Ahmad was interviewed by the Reformatorisch Dagblad newspaper at the Baitun Nur Mosque complex in Nunspeet, Holland.

Asked about the relationship of Ahmadi Muslims with other Muslims, Hazrat Mirza Masroor Ahmad said:

“We feel no enmity towards other Muslims, rather we preach and convey our message due to our love for them.”

In terms of religious tolerance, His Holiness said that Islam taught that people of different faiths and beliefs should focus on their commonalities, rather than on those issues that set them apart.

“All people, regardless of faith or belief, should work together for the betterment of humanity. The Holy Quran teaches that there should be no compulsion in religion and so we Ahmadi Muslims respect all religions, all prophets and all people.”

Upon being asked his advice to the Dutch Government regarding the Syrian refugee crisis, Hazrat Mirza Masroor Ahmad said:

“All genuine refugees should be helped by governments and international organisations. They should be allowed to settle until peace is restored in their home countries… However, it is also important that the authorities remain vigilant and monitor the refugees to ensure that extremists are not allowed to settle under the guise of asylum.”

Reformatorisch Dagblad’s correspondent noted that many extremists sought to justify their heinous acts in the name of Islam and used verses from the Holy Quran to support them.

“I can also quote many verses from the Holy Quran that entirely refute their false interpretations. They have misconstrued the verses of the Holy Quran entirely.”

Regarding apostasy in Islam, Hazrat Mirza Masroor Ahmad said that Islam did not permit any form of punishment for apostasy. His Holiness said that the matter remained entirely between an individual and God Almighty and no one else had any right to interfere.

Reflecting upon the increasing conflict in the Middle East, His Holiness rejected the notion that the West was waging a war against Islam. Rather he said that today’s conflicts were

Upon being asked his message to Dutch politicians, Hazrat Mirza Masroor Ahmad said:

“For many years I have been warning that we are moving towards another world war and today we stand on the precipice. And so my message is that we must join hands and create peace in the world because this is the urgent need of the time.”