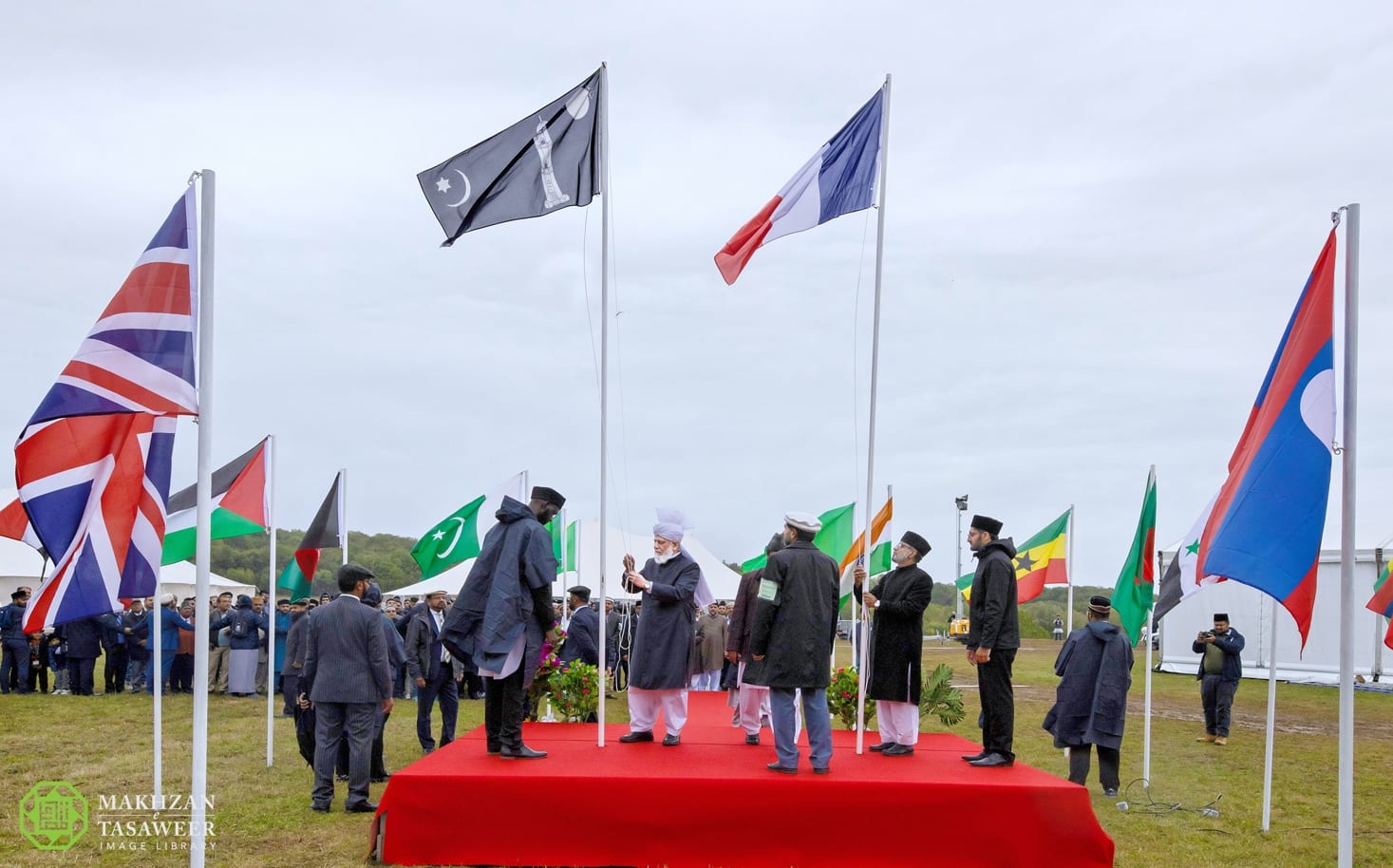 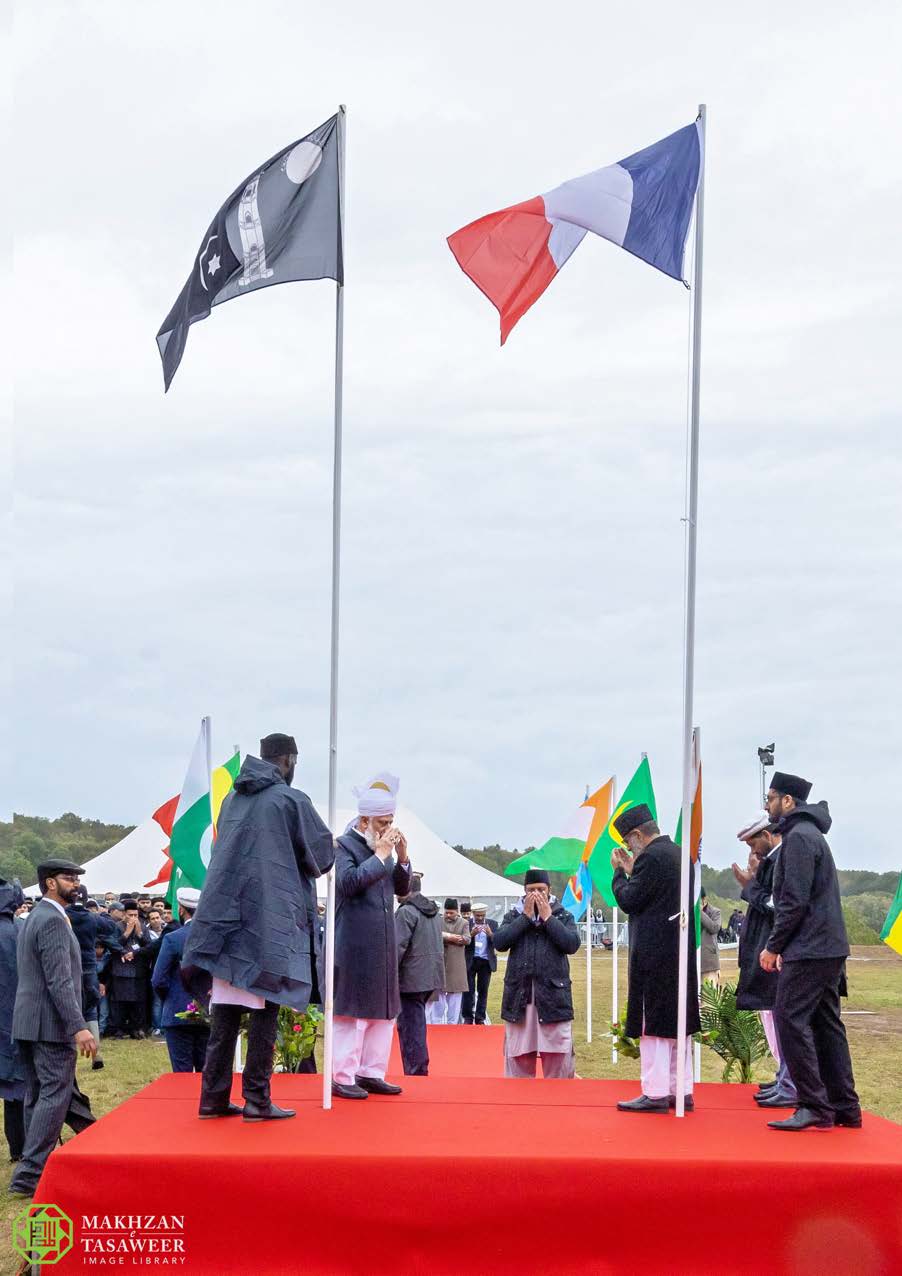 Prior to the Sermon, His Holiness raised the Flag of the Ahmadiyya Muslim Community (Liwa-e-Ahmadiyyat) to officially inaugurate the three-day event, whilst the French National Flag was also raised.

During the sermon, His Holiness spoke in detail about the objectives of the Jalsa Salana as laid out by the Founder of the Ahmadiyya Muslim Community, His Holiness, Hazrat Mirza Ghulam Ahmad, the Promised Messiah (peace be upon him).

His Holiness said that the Jalsa Salana provides an excellent opportunity for the attendees to reflect on their spiritual and moral state and to seek to improve and better themselves. 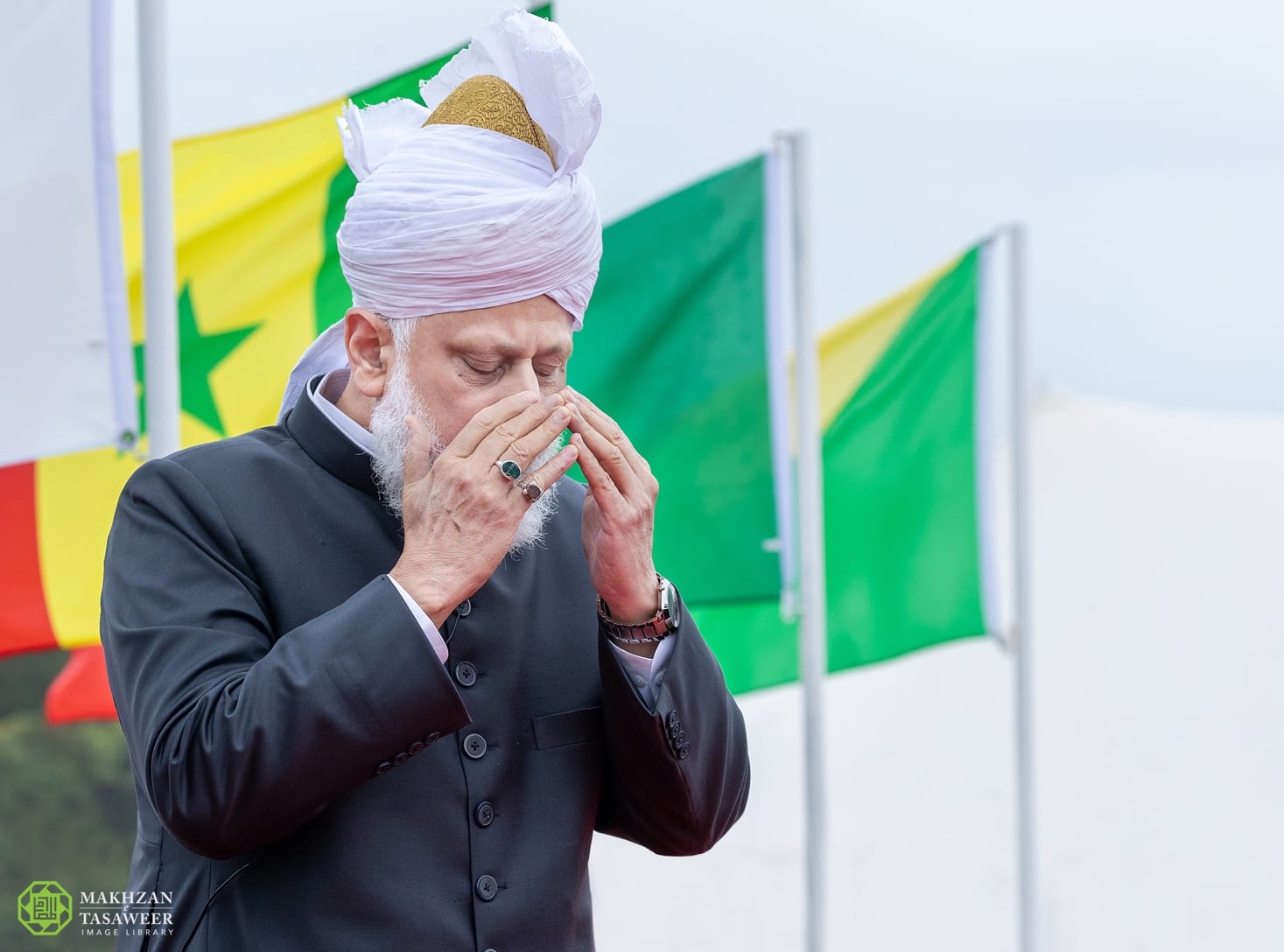 “The Promised Messiah (peace be upon him) has said that the Jalsa is a purely religious gathering. Thus the attendees of this event should bear in mind that we have come here solely to progress in religious, intellectual and spiritual objectives. Our concern for the three days should be the fulfilment of the objective of bettering our morality, knowledge and spirituality.”

His Holiness said if these objectives were not the purpose behind attending the event, then such an individual’s attendance at the Jalsa would be

“equivalent to attending any other materialistic, worldly festival”.

Throughout the address, His Holiness spoke of the importance of adopting righteousnessand outlined that both the rights of God Almighty and the rights of one’s fellow creation are vital for becoming attaining piety.

His Holiness spoke in detail about the importance of praying five times a day and quoted chapter 2 verse 239of the Holy Quran which states:

“Watch over Prayers, and the middle Prayer.”

His Holiness said that this verse shows that prayers should be given more importance than any worldly and materialistic pursuits.

Hazrat Mirza Masroor Ahmad also spoke about the spirit with which prayers should be offered.

“It is not enough to come to the Mosque to pray. Rather, it is vital to come to the Mosque with belief in Allah the Almighty and with a firm faith in the hereafter. Such people have the fear of Allah in their hearts and the hearts of such people are soft and filled with love and affection for others and they harbour a spirit of brotherhood.” 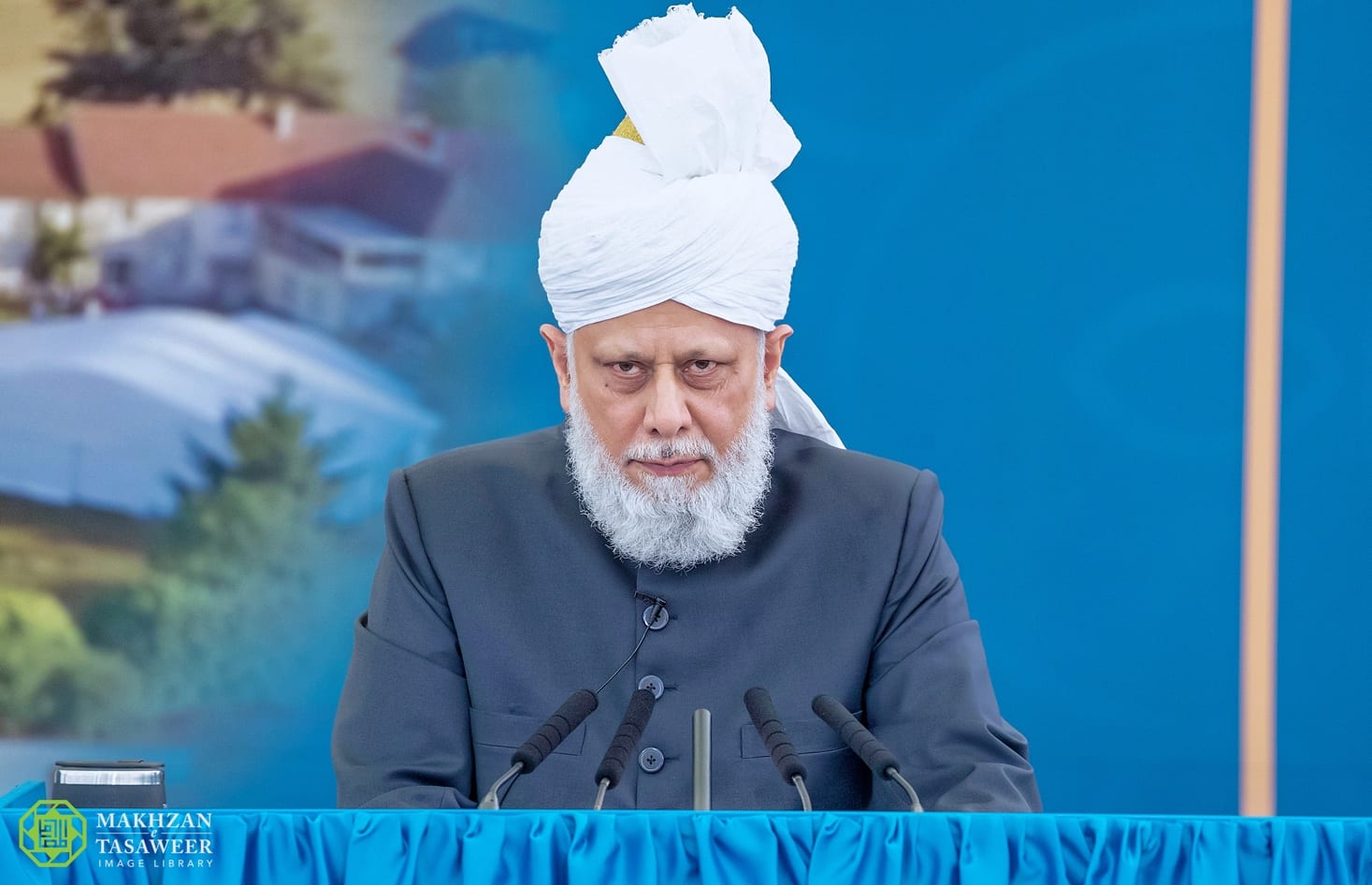 “True believers are those who focus on trying to forgive others rather than seeking revenge. To seek the pleasure of Allah, they have love for one another and are humble. They try to make sacrifices for one another. Thus we all need to reflect on our morals and we must ask ourselves whether we are trying to adopt every form of goodness. If a person does not have love in his heart for their brother, they are void of righteousness.”

His Holiness said that simply proclaiming the slogan of ‘Love for all, Hatred for None’ was not enough, rather each Ahmadi Muslim must personally manifest this statement at every level of their life. This was the way to spread the true and peaceful teachings of Islam to the world.

His Holiness also emphasised the importance of fulfilling the pledge Ahmadi Muslims make to the Promised Messiah (peace be upon him) to live firmly by the teachings of Islam.

“To gain from the blessings associated with the pledge of allegiance made to the Promised Messiah (peace be upon him), one must self-analyse. One must ponder over the objectives he outlined for the Jalsa Salana. It is fortunate for us that we have been granted these three days to focus on these objectives. Each one of us should evaluate ourselves. Rather than spending this time in idle talk, immerse yourself in seeking the repentance of God and invoking blessings upon the Holy Prophet Muhammad (peace and blessings be upon him). Only then can we truly benefit from this gathering.”

Concluding his address, His Holiness quoted the Promised Messiah (peace be upon him) on the subject of creating a harmonious society.

“Tread upon the earth with a pious heart and pure nature. Do not attack anyone unjustly and control your emotions. If any religious subject is discussed, discuss it in soft words and a civil manner. If anyone behaves towards you in an ignorant manner, remove yourself from that gathering with a message of ‘peace’. God Almighty desires to make you a community that can be a model of righteousness and goodness for the rest of the world.”

His Holiness arrived in France on Wednesday 2 October 2019 after a week-long visit to Holland.

Upon arrival at Trie-Chateau, His Holiness officially inaugurated the Baitul Atta complex where the Jalsa Salana France is being held. 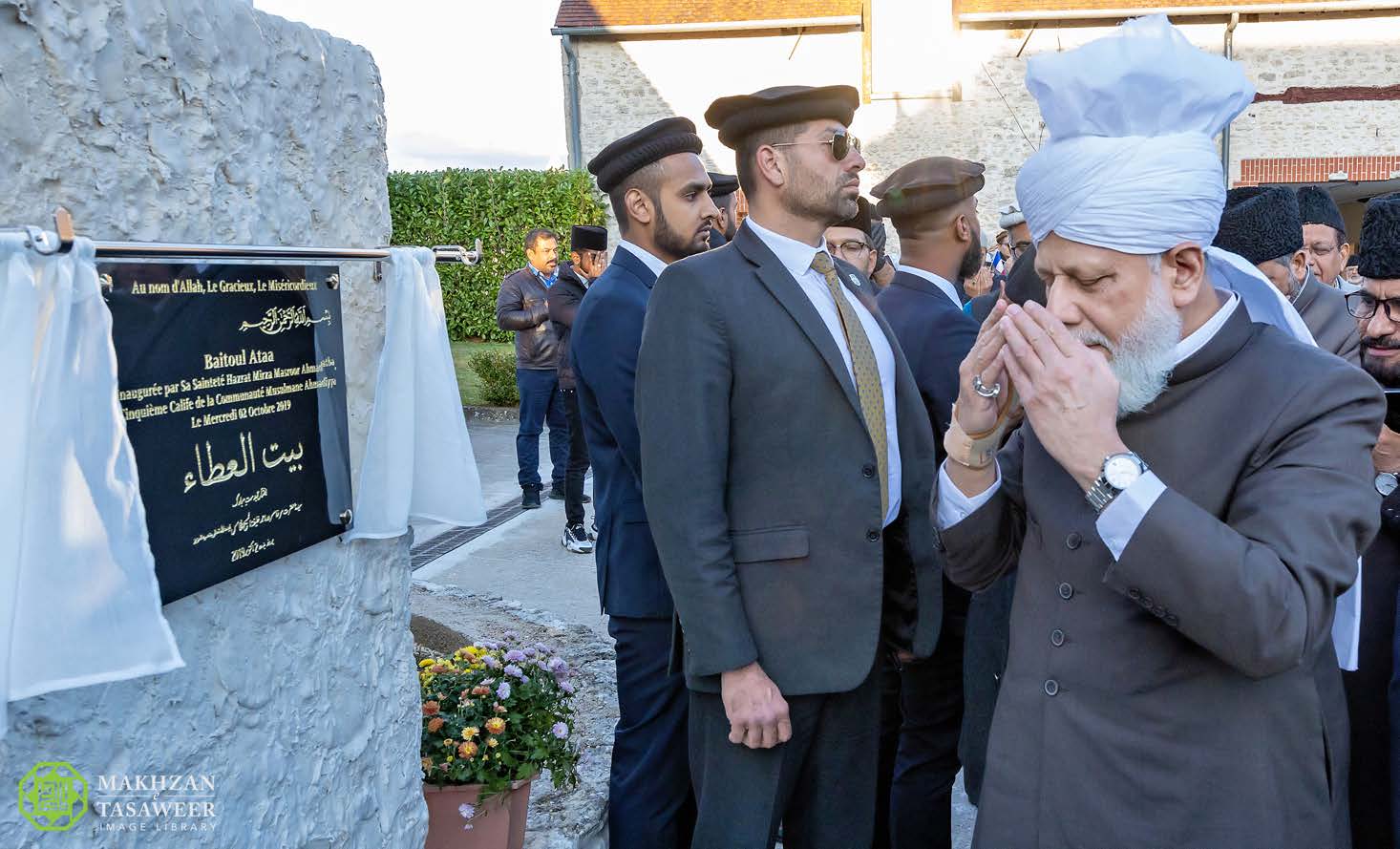