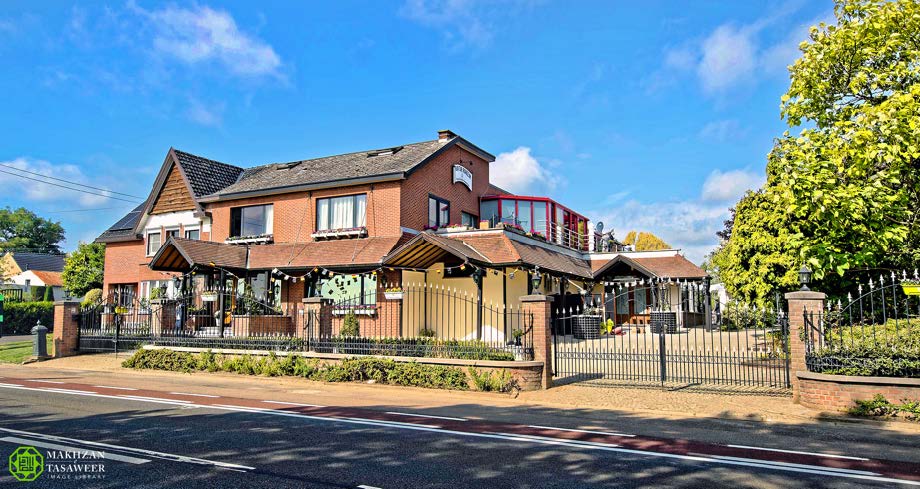 Upon arrival at the new Mosque, His Holiness was greeted by the Mayor of Alken, Marc Penxten, as well as hundreds of Ahmadi Muslim men, women and children.

His Holiness officially inaugurated the Mosque by unveiling a commemorative plaque and offering a silent prayer in thanks to God Almighty. 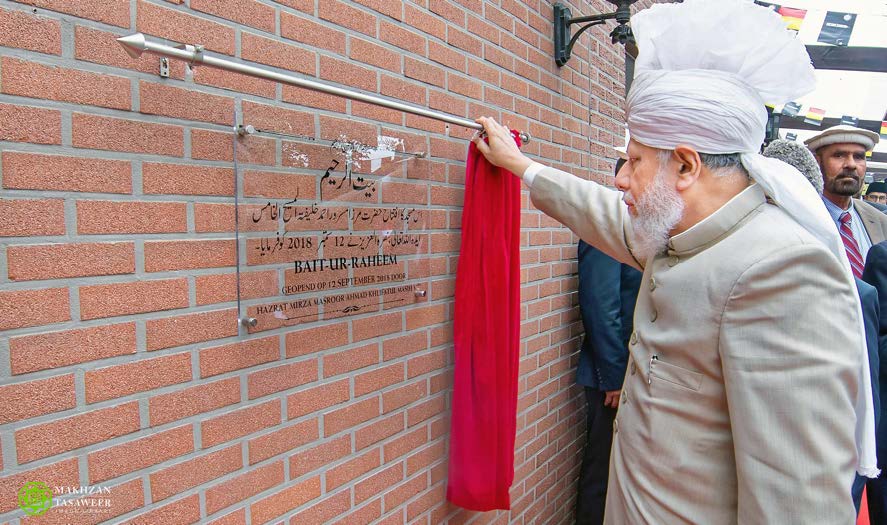 His Holiness also planted a tree at the site to mark the occasion, whilst another tree was planted by the Mayor of Alken. 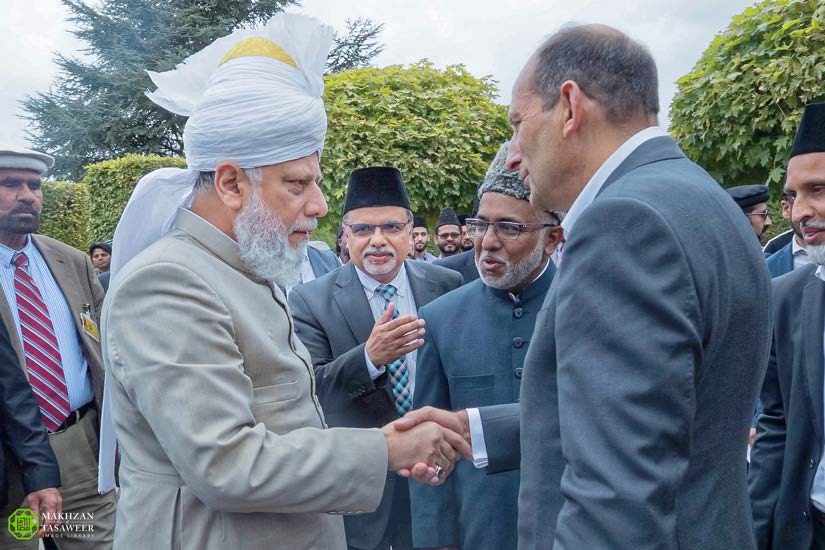 Thereafter, His Holiness led the Zuhr and Asr prayers before addressing the local Ahmadi Muslims.

During his address, His Holiness said that the responsibilities of the local Ahmadi Muslims to practice and preach Islam’s true message of peace and inclusion had increased now that they had a Mosque to worship and congregate in. 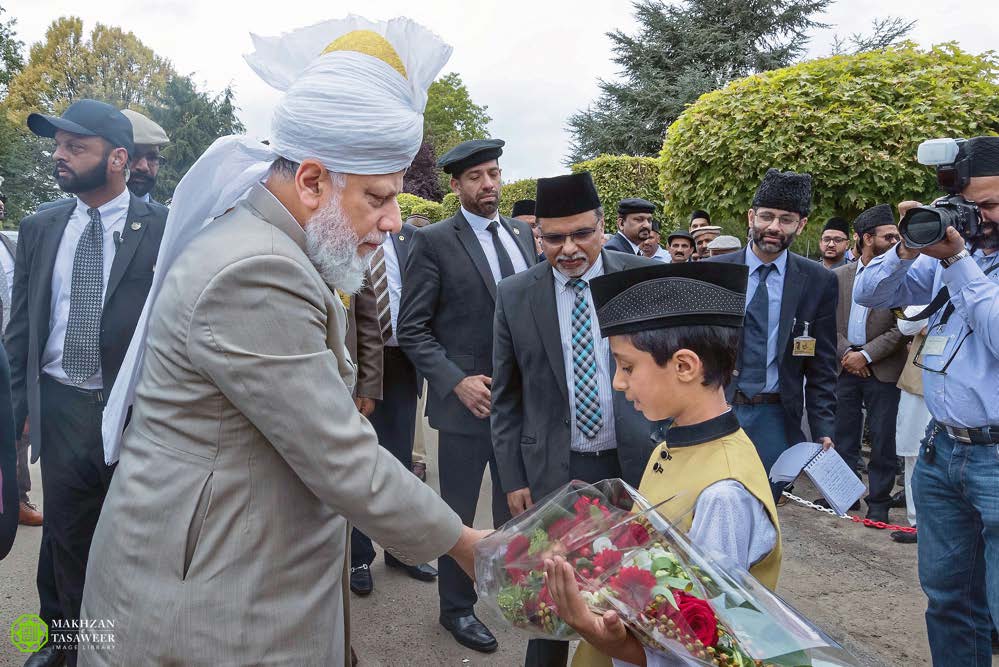 “With the Grace of Allah, the Almighty has blessed the local Ahmadi Muslims with this new Mosque and with its opening, your responsibility to abide by the true teachings of Islam has further increased. The local (non-Muslim) people should come to observe the true peaceful teachings of Islam through your conduct and behaviour.”

His Holiness also praised the local authorities for supporting the Ahmadiyya Muslim Community in its efforts to build the new Mosque.

“The fact that the Mayor of this city is attending this event is praiseworthy, especially given the fact that, generally speaking, there are many misconceptions about Islam in the Western world. In light of this, the support and help of the local authorities is extremely commendable and a sign of their high levels of courtesy and respect.”

At a time of increased materialism, His Holiness said it was incumbent upon Ahmadi Muslims to pay special heed to ensuring they gave precedence to their faith over material interests. 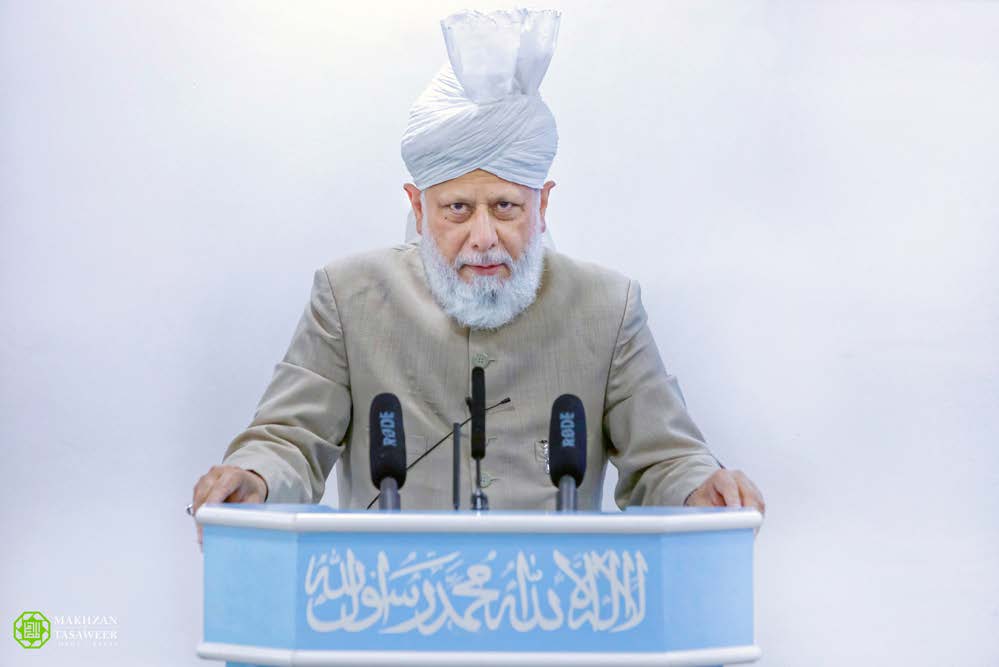 “In the world today, every step taken is to further material interests and to prioritise worldly pursuits above all others. Mankind is rapidly moving away from religion and has been consumed by worldly attractions. Therefore, it is essential for every Ahmadi Muslim to ensure they prioritise the requirements of worship of Allah the Almighty.”

“Allah the Almighty has made it obligatory on Muslims to offer the five daily prayers and remember that this commandment was not for bygone eras. Regrettably, some people say that such commands are not applicable today and that it is not possible to offer the five daily prayers due to our worldly engagements and activities. However, this is a sacrifice that must be made for the sake of Allah. This is what is meant when we pledge that we will always give priority to our faith over worldly matters.” 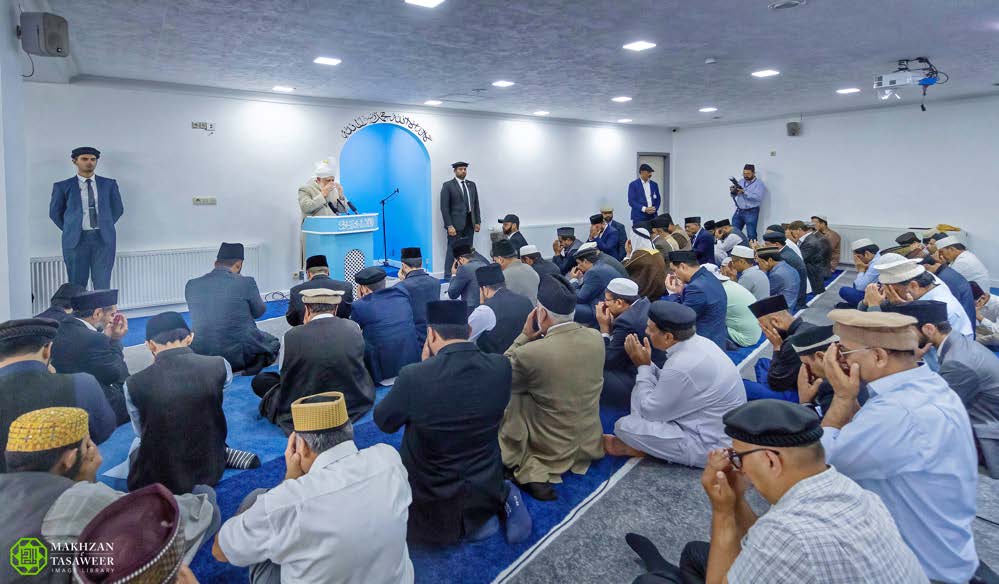 “The Promised Messiah (peace be upon him) also repeatedly drew our attention towards fulfilling the rights of our fellow human beings. Indeed, Allah the Almighty says that the worship of those people who do not care for their fellow man will never be accepted and such prayers are merely superficial. Thus, Ahmadi Muslims should treat each other with great love and develop true brotherhood. Show the world that we are a united community who manifest only love and peace.” 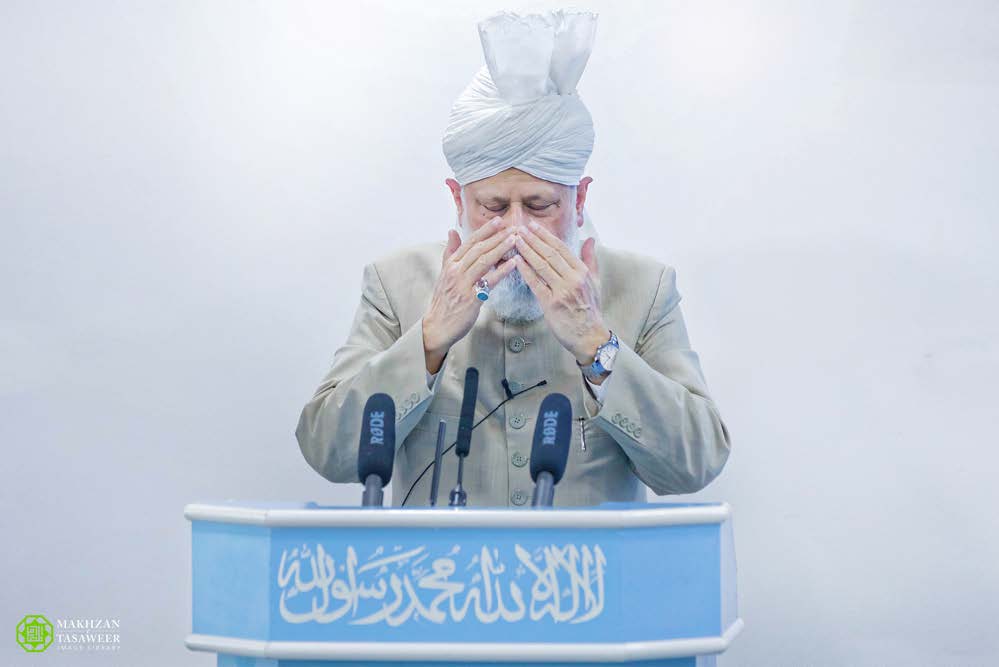 “Furthermore, you must show love to the rest of society and fulfil their needs and requirements. Most certainly, you must care for and love your neighbours, as to do so is in accordance with the Holy Quran. In fact, the Holy Prophet (peace and blessings be upon him) said that he had been instructed by Allah the Almighty so vehemently regarding the rights of neighbours that it occurred to him that a person’s neighbours may be included amongst their rightful inheritors. Thus, ensure that you fulfil the rights of your neighbours and the wider society.” 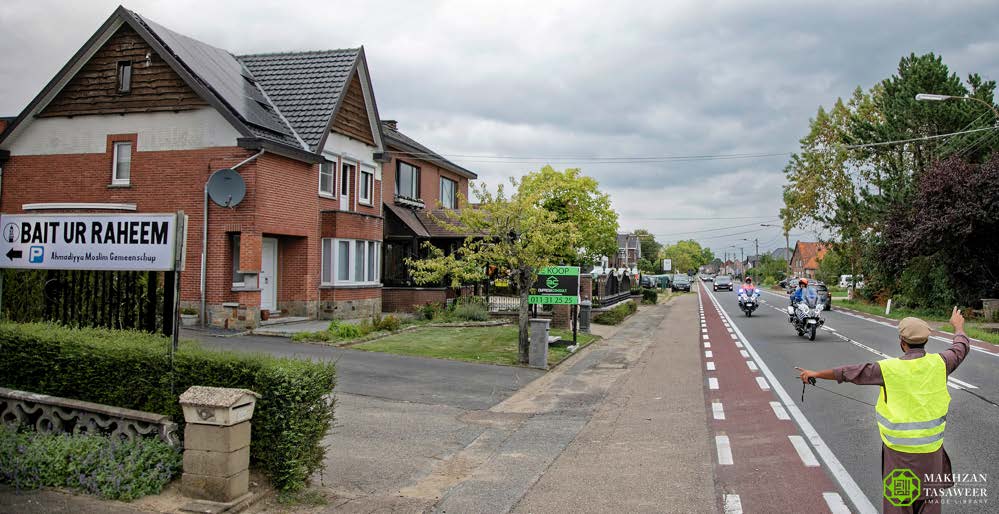 “I hope and pray now that this Mosque has been opened that the Ahmadiyya Muslim Community in this area will continue to grow and spread.”

The Khalifa (Caliph) travelled to Belgium from Frankfurt by road and after arriving in Belgium he was greeted by the National President of the Ahmadiyya Muslim Community in Belgium, Dr. Idris Ahmad and various other officials.

His Holiness has travelled to attend the Jalsa Salana (Annual Convention) of the Ahmadiyya Muslim Community in Belgium taking place in Brussels, Belgium. During the 3-day event (14-16 September) His Holiness will address both Ahmadi Muslims and non-Ahmadi guests about the true and peaceful teachings of Islam. His Holiness will also present Ahmadi Muslim male and female students with awards in recognition of high academic achievement. 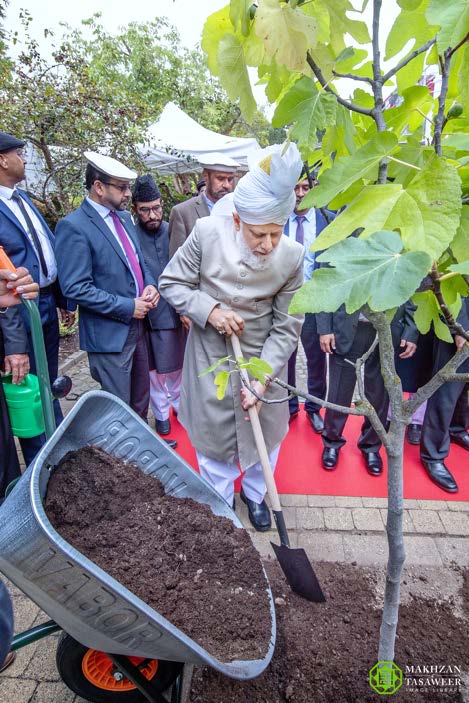 During his visit, His Holiness will personally meet with hundreds of Ahmadi Muslims and various dignitaries and guests attending the Jalsa Salana.