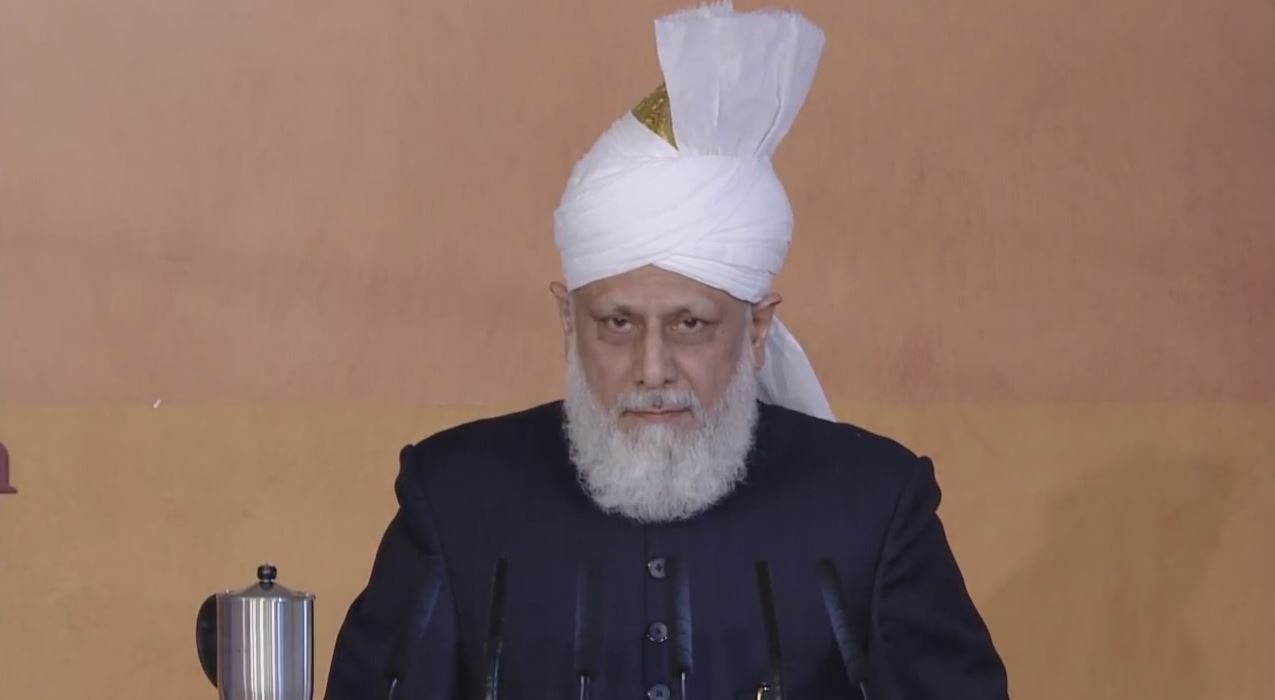 The 3-day event, which was attended by more than 5,700 people from across the United Kingdom, was held at the Baitul Futuh Mosque complex in south-west London.

During his address, His Holiness spoke both in English and Urdu about the importance of following every command of the Holy Quran. He particularly highlighted and explained the concept of Purdah in Islam and said that it was a means of establishing the dignity and true freedom of a woman.

His Holiness said that those who observed Purdah would be greatly rewarded by God. He said the word used in the Quran is ‘falaah’, which has many positive meanings including prosperity, success, safety, security, happiness and tranquillity.

“Always remember that God has not given a single command without reason or purpose. Every command of Allah is a means of benefit to the individual and to the society. Allah’s commands are a means of protection from the many dangers and obstacles that are placed in front of us in this life, and are also a means of making sure we attain the very best rewards and blessings in the Hereafter.”

The Khalifa said that Islam taught a moderate path and so all forms of extremism should be rejected. He said that this was also the case in terms of Purdah.

“Allah’s commandment in regards to Purdah must be kept in balance and moderation, as both sides have lurched towards extremism. In Europe and in the West generally, the society has become so free and immodest that adultery and indecency are now prevalent. On the other side, there are Muslims who are so fanatical that they even stop their women from ever leaving their homes.”

Hazrat Mirza Masroor Ahmad said that in western society the practice of Purdah was sometimes mocked or considered cruel. He said that this should not stop any Muslim woman from following this Islamic teaching.

“If you live in a society where a certain instruction of Allah is looked down upon or mocked, but you continue to follow God’s command then you will attain even more blessings and rewards from Him on account of your steadfastness. Thus in this society you will surely be greatly rewarded for observing the proper standards of Hijab.”

“Today, I have spoken particularly about Purdah because it is often alleged that Purdah takes away women’s rights. However, we know that this is not the case and the truth is that Purdah and Hijab actually establish the true dignity, independence and freedom of women. Hijab does not only give women physical security but is also a key means of giving them spiritual security and purity of heart.”

Hazrat Mirza Masroor Ahmad said it was the task of Lajna Imaillah to portray the true status of women in Islam.

“As members of Lajna Imaillah, it is particularly your responsibility to wash away the unjust allegation that, God forbid, Islam advocates the harsh or cruel treatment of women.”

Hazrat Mirza Masroor Ahmad also spoke about the how Ahmadi Muslims should remain constantly engaged in the worship of Allah.

“True worship requires that every act of ours is conducted with the intention of gaining God’s pleasure. If this is our intention then our each and every act, whether big or small, becomes a form of worship.”

His Holiness concluded by praying:

“May all of you, through your conduct, disprove those who say that Islam treats women in the wrong way. In fact, may all of you prove to the world that the women and girls of the Ahmadiyyat Muslim Community are shining examples of Islam’s true teachings and are those who understand the true meaning of freedom through which a woman’s honour and dignity is established.”