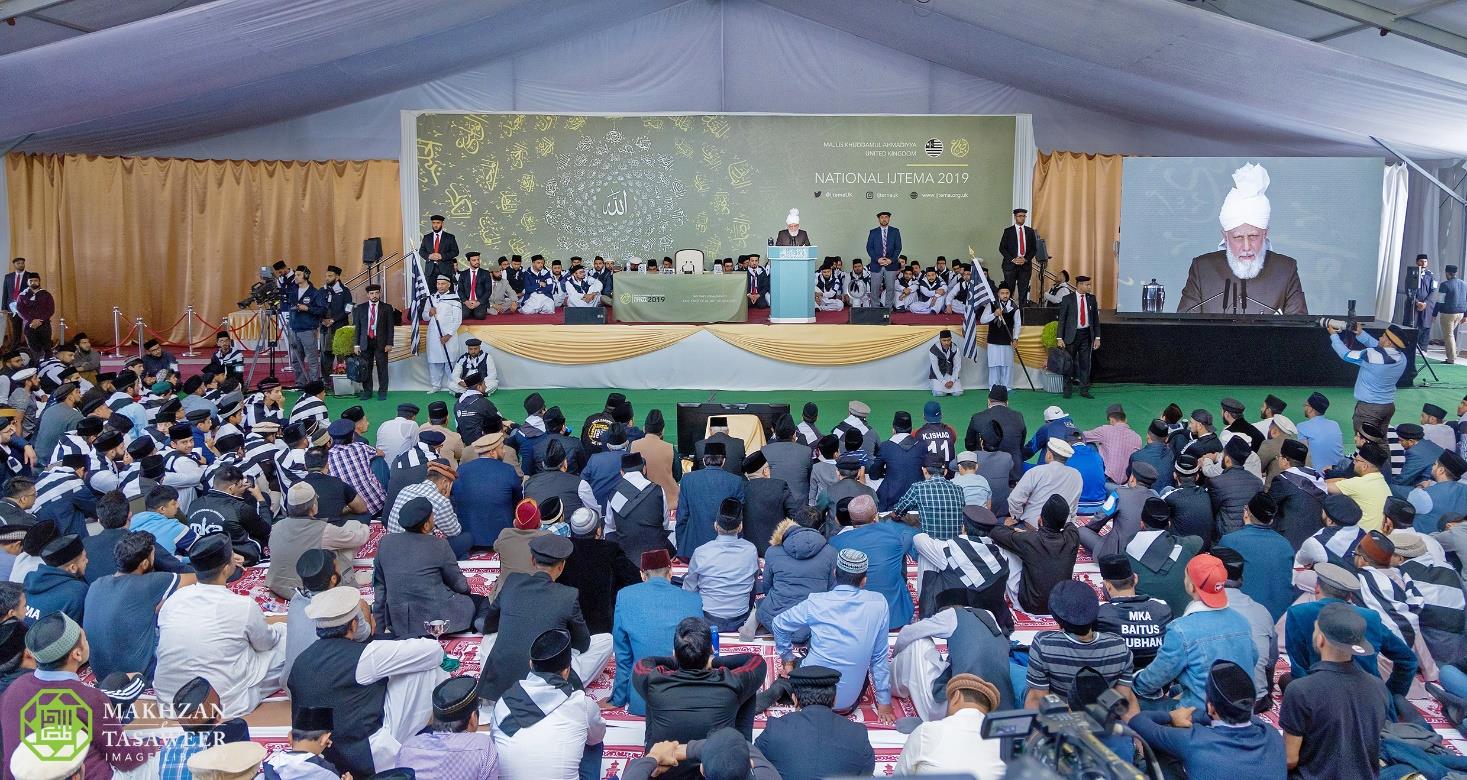 Hazrat Mirza Masroor Ahmad addresses a congregation of more than 6,100 attendees from across the UK.

“Every Ahmadi Muslim must prove to the doubters and skeptics that God does exist and that He is a Living God and that Islam is the final religion revealed by Him.” – Hazrat Mirza Masroor Ahmad 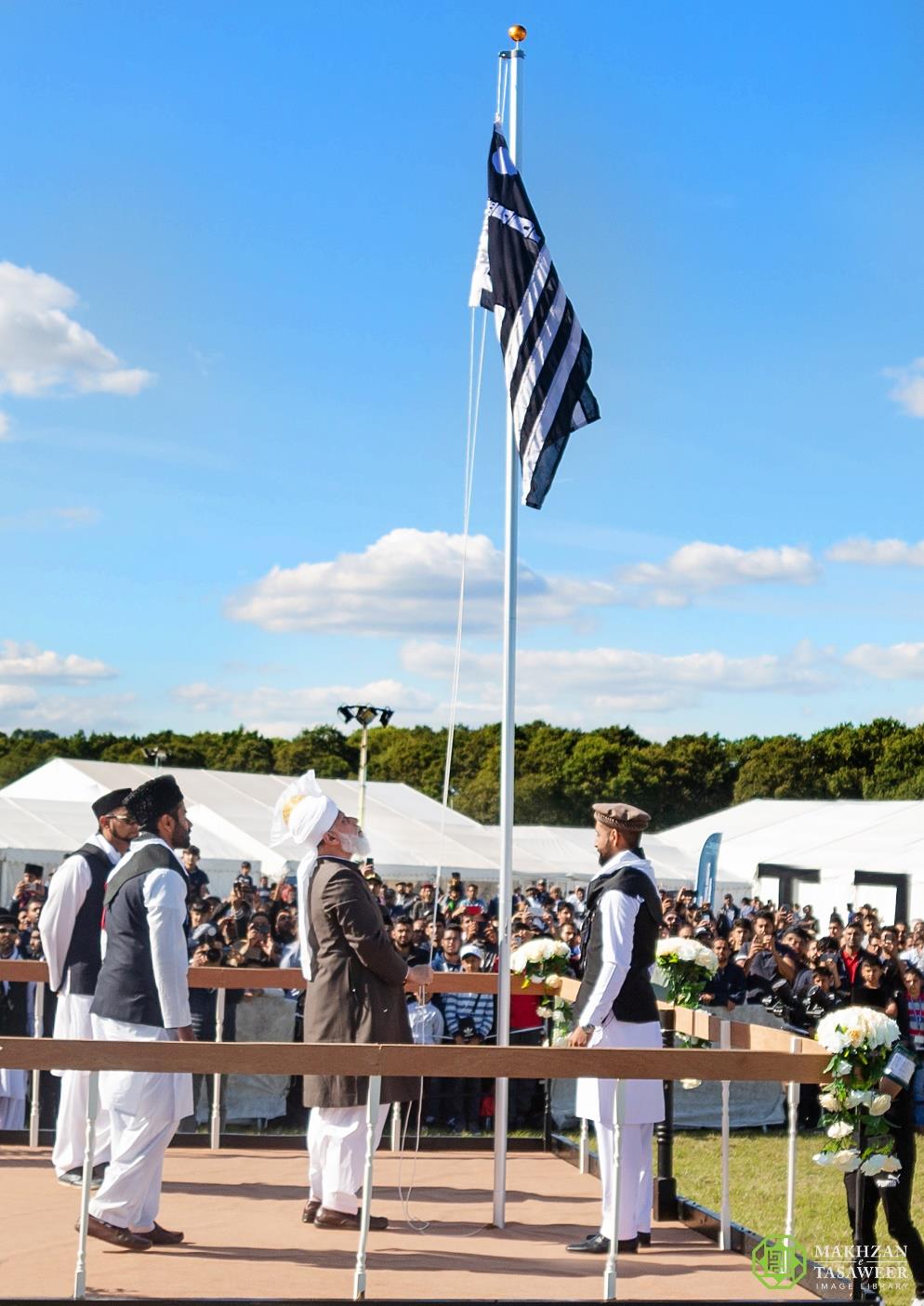 The objectives of the Ijtema, held for the third time at Country Market, Kingsley, were to educate the Muslim youths of the true peaceful teachings of Islam and to inspire them towards serving both their faith and nation to the best of their abilities. 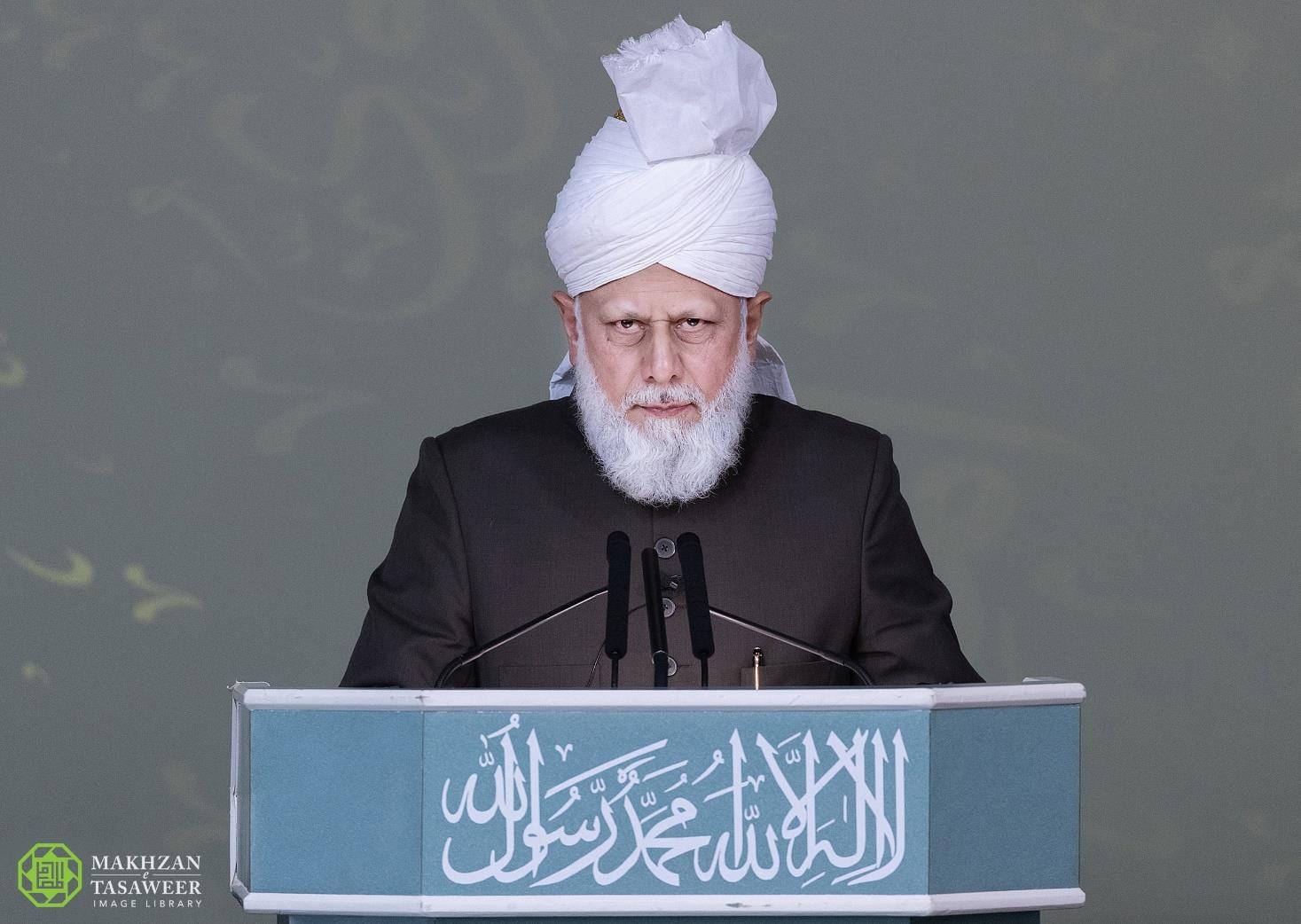 The theme of this year’s Ijtema was ‘The Existence of God’. During the concluding address, His Holiness spoke extensively about the importance of paying heed to one’s spiritual and moral state.

Shining light on the true purpose of religious gatherings, such as the Ijtema, Hazrat Mirza Masroor Ahmad said:

“The main reason we hold Jalsas and Ijtemas (gatherings) is so that all the participants can join together to elevate their spiritual and moral standards and increase their religious knowledge and to recognise that they should continually seek to better themselves.”

“Most importantly, attending the Ijtema should focus the minds of all participants on the foremost requirement of strengthening their bond with Allah the Almighty.”

“It is not enough to merely repeat this slogan or to have it printed on posters or badges, rather you must understand its true meaning and the underlying philosophy behind these profound words.”

“The reason the Second Caliph of the Ahmadiyya Muslim Community assigned this slogan to the youth organisation was to emphasise how important it was for the youth to not only gain secular education, but above and beyond this, to constantly develop their relationship with Allah the Almighty.”

His Holiness explained to the congregation that this motto, if acted upon, would prove to be the

‘guarantor of the success and continued prosperity of the community’.

“These words reinforce and reiterate the fact that the success of our Community and our nation is directly linked to the spiritual and moral state of the youth. If every Khadim (youth member) pays heed to this then it will enable them to follow the commands of God Almighty and to stay away from immorality and wrongdoing.”

His Holiness stressed that personal reformation is vital before a reformation can brought about within the wider world, otherwise the slogan of the Ahmadiyya Muslim Youth Association will become

“an artificial motto comprised of hollow and meaningless words instead of benefitting society”.

His Holiness also spoke about how people are abandoning religion in large numbers and, more generally, are embracing disbelief in the existence of God.

His Holiness went on to impress the importance of the role that Ahmadi Muslim youth must play in answering the questions and arguments of those who deny the existence of God.

“Every Ahmadi Muslim must prove to the doubters and skeptics that God does exist and that He is a Living God and that Islam is the final religion revealed by Him.”

“Do not underestimate your role in this effort or consider it to be the job of other people to convey this message. Indeed, Ahmadi Muslim youths must lead this effort and wholeheartedly accept this great challenge of our time.”

His Holiness then presented the standards of sacrifice and spirituality of the companions of the Holy Prophet Muhammad (peace and blessings be upon him) as an example to those in attendance.

“The companions of the Holy Prophet Muhammad (peace and blessings be upon him) were the esteemed group of people for whom history bears witness that they not only pledged to give precedence to their faith over all worldly matters but, more importantly, they fulfilled that pledge in the most astonishing fashion. They spared no effort to discharge their oath and gave every possible sacrifice for the sake of their faith. “

“As a result, Allah the Almighty enabled them to excel in spiritual and moral terms… At the same time, He also blessed them in worldly terms… to the extent that some even became ‘millionaires’ in today’s terminology. However, such wealth never took them away from their faith or corrupted them.”

“The way to offer Istighfar is not simply to ask Allah the Almighty to forgive your past mistakes or sins. Rather, you should not only look to the past but should also look to the future. Thus, when seeking forgiveness for your previous mistakes, you must also be utterly resolute in your determination to stay away from such vices moving forward.”

Hazrat Mirza Masroor Ahmad said that along with seeking repentance, one should also pray in the Quranic words that ‘Guide us on the right path’ in order to seek the help of God.

“This prayer should be offered with total humility and a firm intention to stay on the path of righteousness and to reject the advances of Satan, who constantly seeks to entice us towards engaging in the type of illicit and deceitful behaviour that will surely incur the Wrath of Allah.”

“Hence, every Ahmadi Muslim – man or woman, young or old – having accepted the Promised Messiah (peace be upon him) and pledged to prioritise their faith over all worldly matters, should repeatedly offer this prayer in order to stay rightly guided.” 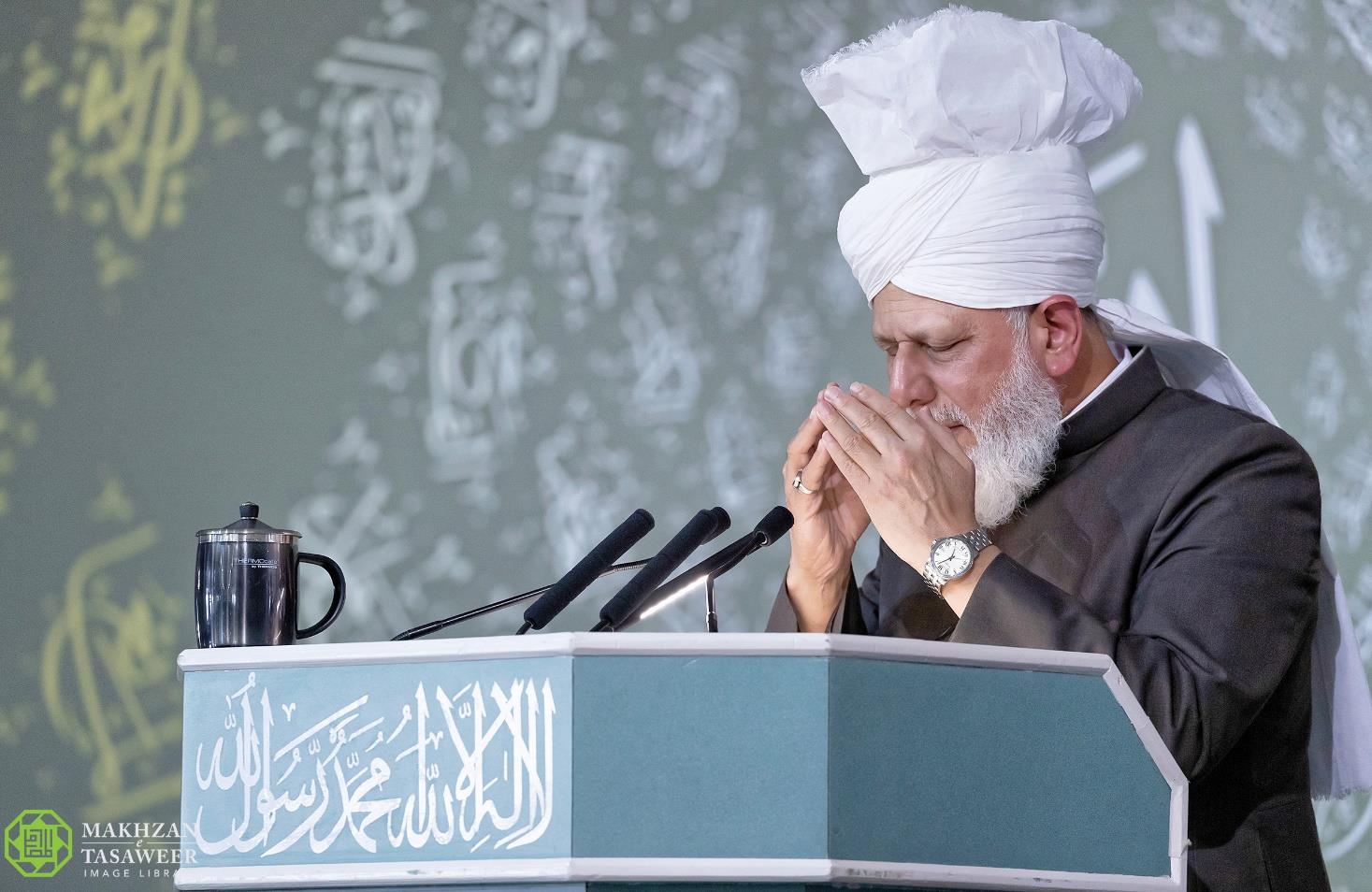 With reference to prioritising one’s faith over all worldly matters, His Holiness also warned the audience of the multitude of dangers prevalent in today’s society.

“It is no exaggeration to suggest that in this era, more than ever before, society is engulfed by satanic influences. In addition, pornography, drugs, online gaming, gambling, immoral and inappropriate relationships, going to nightclubs and many other things are amongst those satanic influences which are entirely harmful and are taking people away from God Almighty.”

His Holiness also explained that salvation can only be attained by turning towards God with true sincerity. He said that even the Prophets of God sought the forgiveness of God, in spite of their noble and pure characters.

“If even the noble prophets require Allah’s Grace and Mercy to be saved, then what can be said of an ordinary person? Surely it is only by turning towards Allah with true sincerity and humility, seeking His forgiveness and compassion that a person can remain on the right path”

His Holiness advised members of the Ahmadiyya Muslim Youth Association to take the lead in propagating the belief in the existence of God Almighty across society.

In this regard, Hazrat Mirza Masroor Ahmad said:

“Truly understand that they have been given the duty to reform their nations and for this they must first reform themselves. Be amongst those members of the Ahmadiyya Muslim Community who are determined to unite the whole world in the firm belief in the unity and oneness of God Almighty.”

Later, His Holiness expressed the desire for the young members of the Ahmadiyya Muslim Community to remain firm upon their faith and true to their religion.

“It is my ardent and heartfelt prayer that the members of Majlis Khuddamul Ahmadiyya and Atfal-ul-Ahmadiyya are those who cherish and protect their Islamic values and realise that their every success will be based upon staying true to their core identity as Ahmadi Muslims.”

His Holiness concluded his inspiring address with the following prayer:

“I pray that may Allah the Almighty instil in your hearts nobility, purity and may you live your lives upholding the highest moral and spiritual standards. May you continually fulfil the rights of Allah the Almighty and of His Creation at every juncture and moment of your lives. Ameen.”

During the Ijtema, more than 6100 Ahmadi Muslim youths from over 140 local communities from across the United Kingdom (Qiadats) attended and competed in various sports and academic competitions, including in a special ‘audience vote’ on presentation competitions to increase engagement in academic participation.

The Muslim youths were also able to visit the ‘The Hub’ where they had the opportunity to ask questions in a confidential environment about religion or social issues.