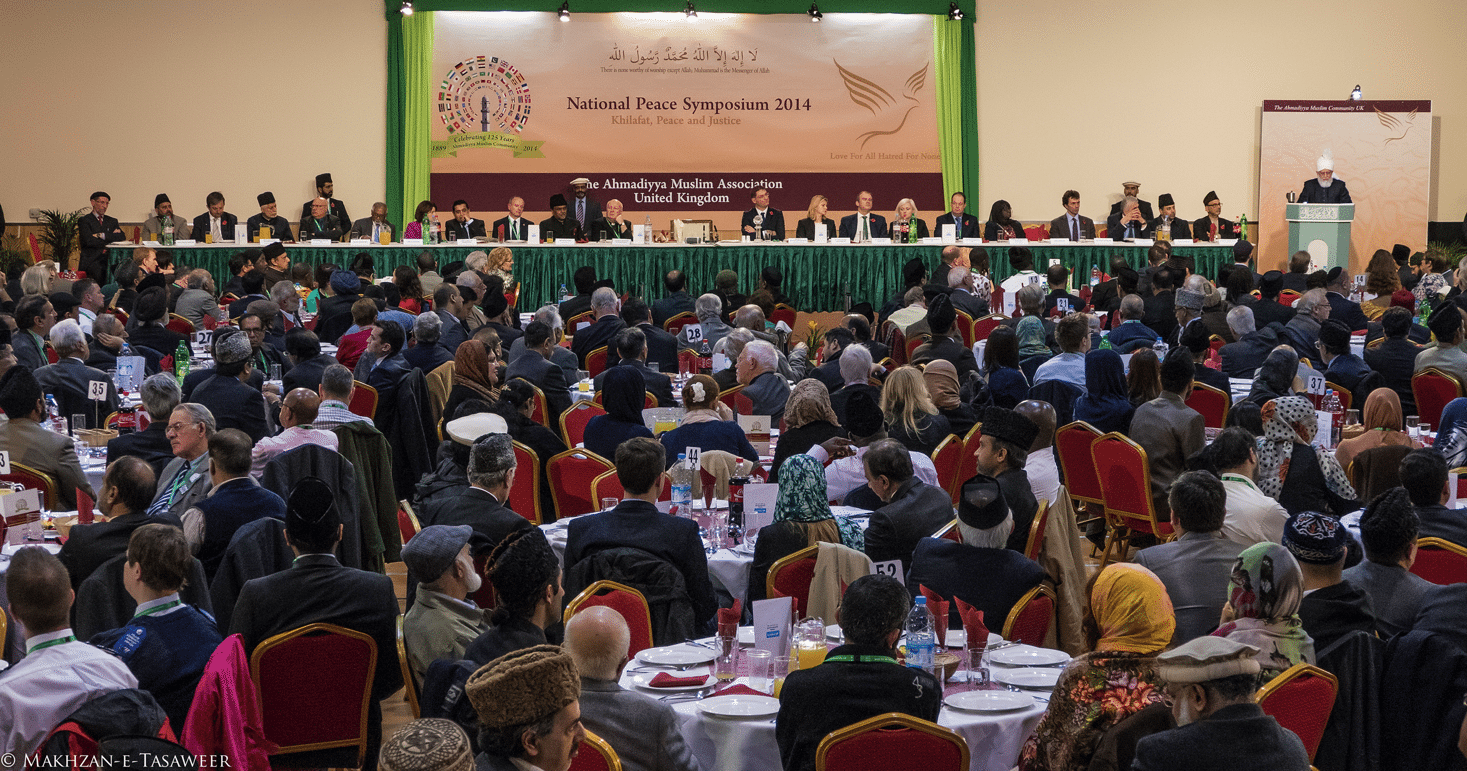 During his address, His Holiness categorically condemned the activities of ISIS and other extremists groups as

and said they were

“viciously spreading a network of terror”

Quoting extensively from the Holy Quran, His Holiness proved Islam to be a religion of peace that promoted tolerance, mutual respect and understanding at all levels of society. His Holiness also questioned how extremist groups such as ISIS were funded and supported.

The event was held at the Baitul Futuh Mosque in London with an audience of more than 1000 people, including 550 non-Ahmadi guests comprising Government Ministers, Ambassadors of State, Members of both Houses of Parliament and various other dignitaries and guests. The theme of this year’s Peace Symposium was “Khilafat, Peace and Justice”.

During the event, His Holiness also presented Magnus MacFarlane-Barrow, Founder and CEO Mary’s Meals UK, with the Ahmadiyya Muslim Prize for the Advancement of Peace in recognition of his outstanding efforts to provide food and education to hundreds of thousands of children in the developing world.

Hazrat Mirza Masroor Ahmad began his address by speaking of the increasing threat of terrorism and extremism in today’s world.

“Over the past year, one particular group has viciously spread its network of terror and has become a cause of major concern for the world. I am speaking of the group of extremists commonly known as ‘ISIS’ or ‘I.S.’ The actions of this terrorist group are not only impacting Muslim countries, but also countries in Europe and further afield are also being affected by its brutalities. 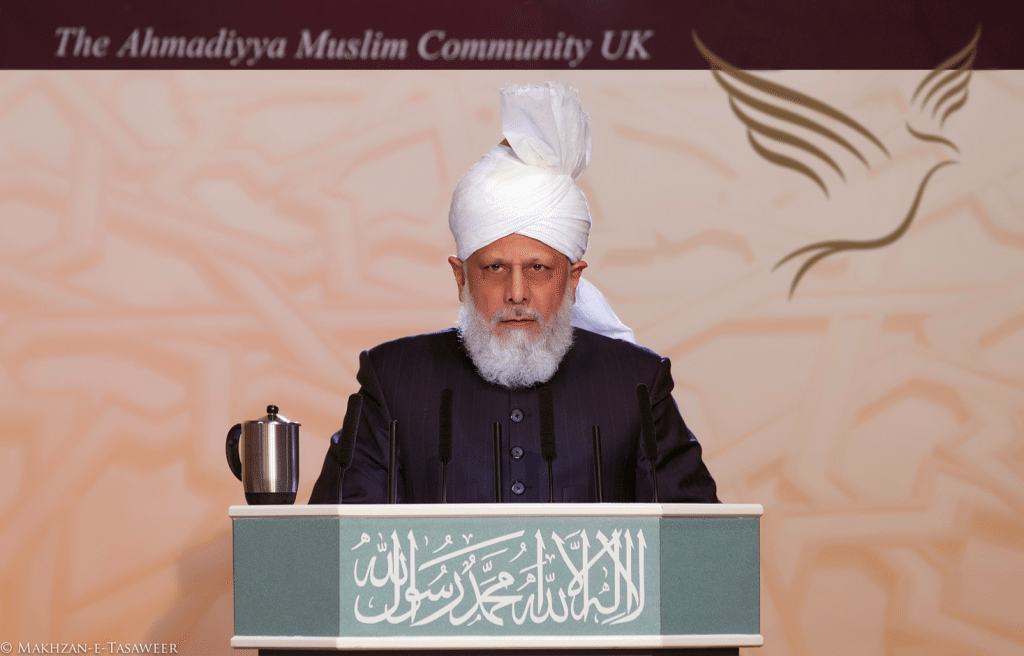 Hazrat Mirza Masroor Ahmad said it was highly “disturbing” that hundreds of Muslim youths from all parts of the world were being attracted by ISIS and were going to Syria and Iraq to fight for them. His Holiness said: “the agenda and objectives of ISIS and their so-called Khalifa are utterly horrific and barbaric”.

“Consider just how much suffering and ruin can be caused by an extremist group, which is gathering together frustrated and restless people from all parts of the world who are ready to give their lives for this unjust cause…

This is especially true given the fact that this group (ISIS) does not just have willing individuals but is also heavily armed with sophisticated weapons systems and artillery. Indeed, it is not out of the question that they could eventually lay their hands on nuclear weapons.”

“When all of this is considered there is no doubting the horrific threat to the world posed by ISIS and any of the groups that have similar ideologies. The fact that all of this is being done in the name of Islam sincerely grieves and pains all true and peace loving Muslims because such brutal and inhumane ideologies have nothing to do with the religion whatsoever. Rather, in every way, and at every level, Islam’s real teachings are of peace and security for all people.”

The Khalifa went on to give a detailed account of Quranic teachings in relation to warfare, stating that wherever Muslims were given permission for a ‘defensive war’ it was given as a means to protect all religions and not just Islam. He also explained the unparalleled efforts made by the Holy Prophet Muhammad (peace be upon him) to spread peace throughout the world. 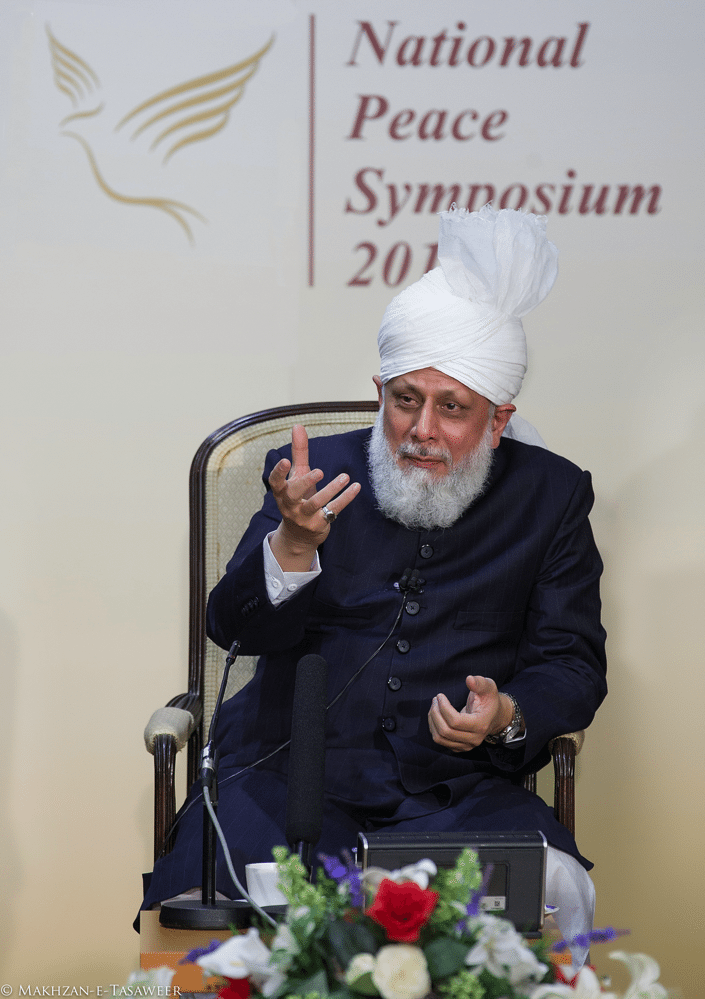 Hazrat Mirza Masroor Ahmad went on to speak about how ‘freedom of conscience’ was a fundamental tenet of Islam. He said that Muslims were permitted only to preach the message of Islam in a peaceful way.

“It is never permissible, in any circumstance, to force another person to accept Islam or indeed any religion… All people are free to believe or not to believe. And so when the Holy Prophet (peace be upon him) was permitted only to convey the message of Islam and nothing further – how then can the so called Muslim leaders of today go beyond this and think they have more power, authority or rights than the Prophet of Islam?” 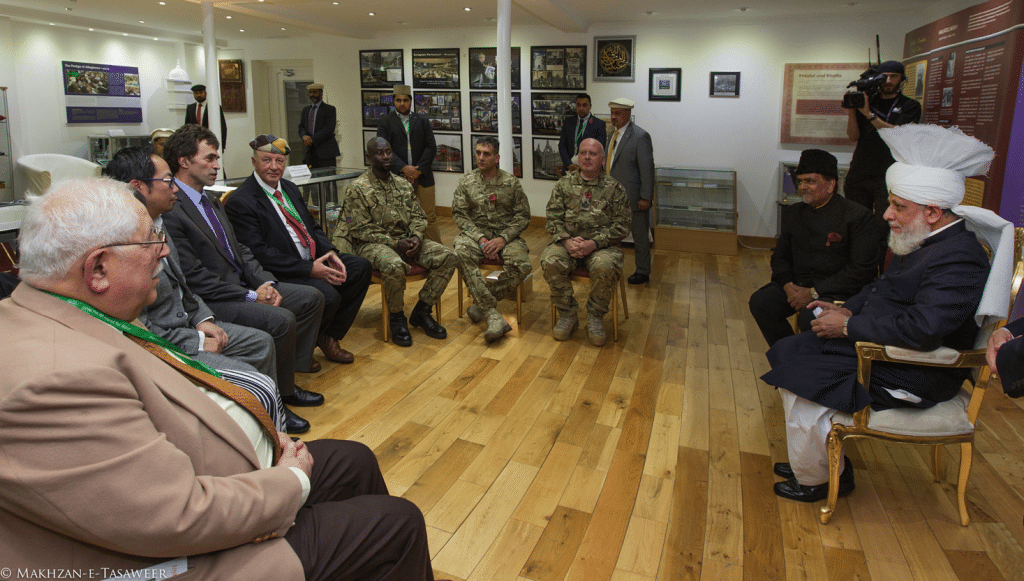 Hazrat Mirza Masroor Ahmad ended his address by questioning how terrorist or extremist groups were being funded and by appealing for world peace through true justice.

“I would also hereby like to question those people or organisations who claim that Islam is a religion of violence on the basis of the atrocities of the extremist groups. I would ask them to consider how these groups are able to acquire such funds that allow them to continue their extremist activities and warfare for so long? How do they acquire such sophisticated weapons? Do they have arms industries or factories?

It is quite obvious that they are receiving the help and support of certain powers. This could be direct support from very oil-rich states or it could be other major powers covertly providing assistance.”

“The funding of these groups is a major problem because it is through these funds that they are able to prey on vulnerable groups or individuals… Thus something has to be done to stop the funding of these groups urgently. The West has now started to realise and acknowledge that this is a war that is actually directly affecting it as well. However, this too is under-estimation – the truth is that this is a war against the entire world.” 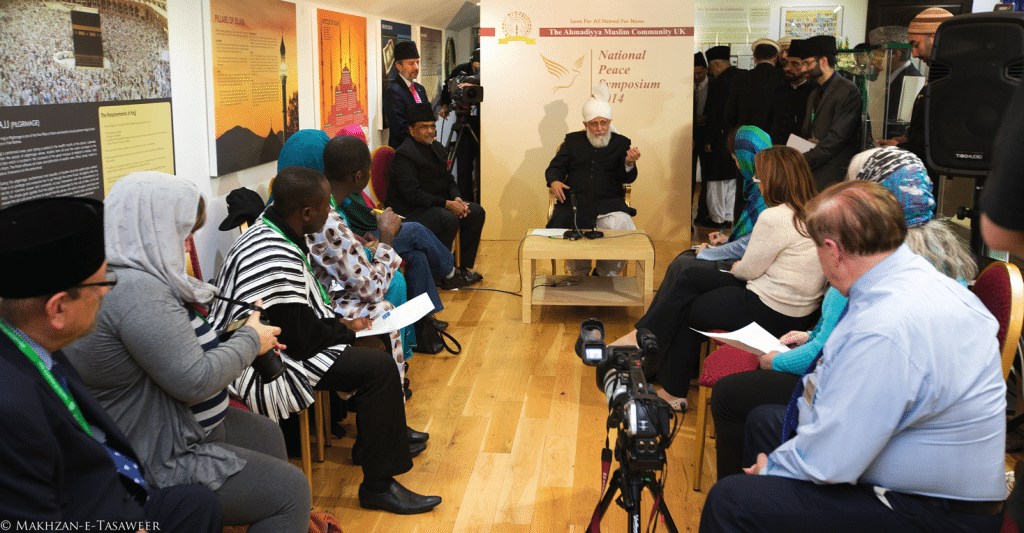 His Holiness concluded by saying:

“Most importantly the world must realise that it has forgotten its Creator and they must come back to Him. Only when this happens can true peace be established and without this there can be no guarantee of peace. I have spoken many times previously about the horrific consequences of another global war and perhaps it will only be after such a war that the world will come to realise the destructive results of the unjust policies that were made only to satisfy personal ambitions and vested interests. I hope and pray that the world comes to its senses before such a disaster comes to pass.” 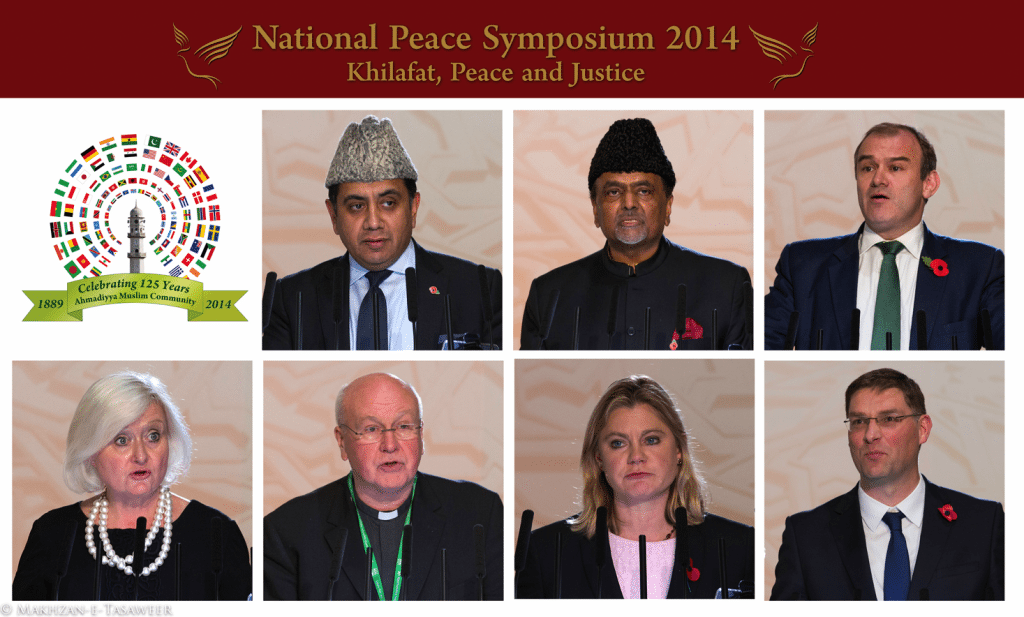 Rafiq Hayat, the National President of the Ahmadiyya Muslim Community UK, spoke of the need for peace in the world. Referring to Remembrance Day commemorations that were taking place this week, he said the Ahmadiyya Muslim Community “honoured” all those British servicemen and women who had sacrificed their lives for the sake of their nation during the First World War.

Siobhain McDonagh, MP and Chair of the “All Party Parliamentary Group for the Ahmadiyya Muslim Community’ said:

“I congratulate the Ahmadiyya Muslim Community on its 125th anniversary. It is a community that has always promoted peace and harmony in the world.”

“The Ahmadiyya Muslim Community is my Community – it is my home and this is my place of worship.”

“In the world today we see ‘politics of division’ in so many parts but under the leadership of His Holiness, Hazrat Mirza Masroor Ahmad, the Ahmadiyya Muslim Community promotes a ‘politics of unity’ with the aim of establishing unity across the world.” 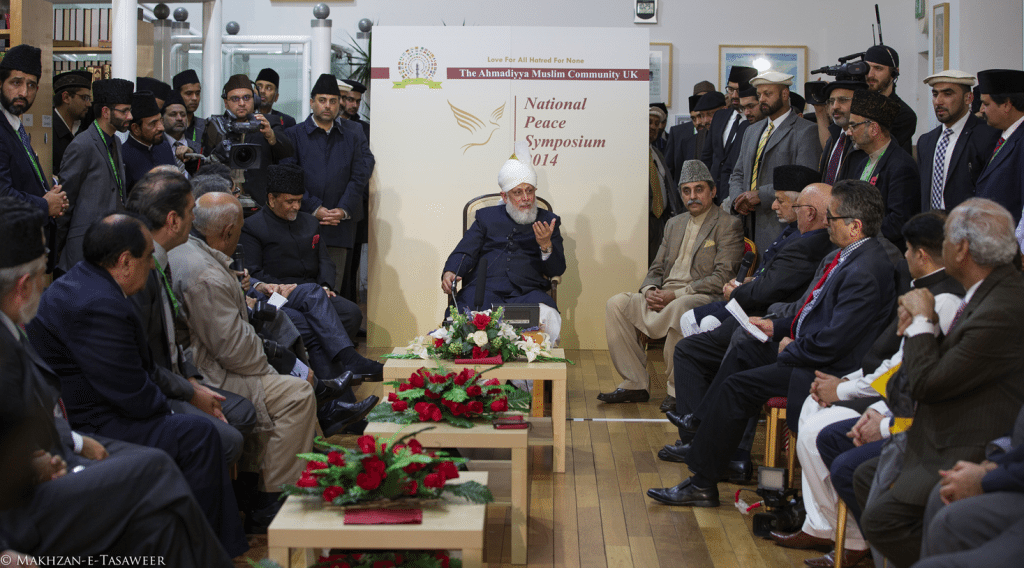 “Tonight is a simple but powerful event where people are being brought together to discuss and understand each other and to eat together as families do.”

Most Reverend Kevin McDonald, Archbishop Emeritus of Southwark, who also read a special message from the Vatican, said:

“I strongly applaud the huge contribution being made by the Ahmadiyya Muslim Community in spreading peace in the world.”

The recipient of the Ahmadiyya Muslim Prize for the Advancement of Peace, Magnus MacFarlane-Barrow, CEO Mary’s Meals UK said:

“I am deeply honoured and moved to receive this award and thank His Holiness, Hazrat Mirza Masroor Ahmad for this honour. The work of Mary’s Meals is very simply to feed children so that they are able to go to school.” 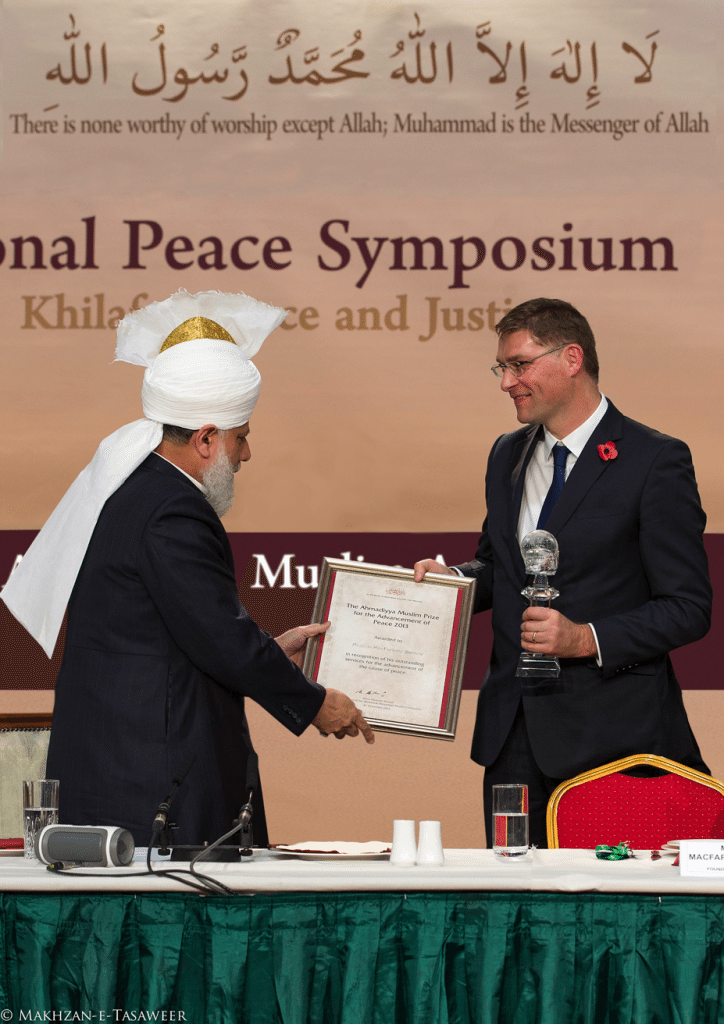 Both before and after the proceedings, His Holiness met personally with various dignitaries and guests and also met with members of the western and Asian media.