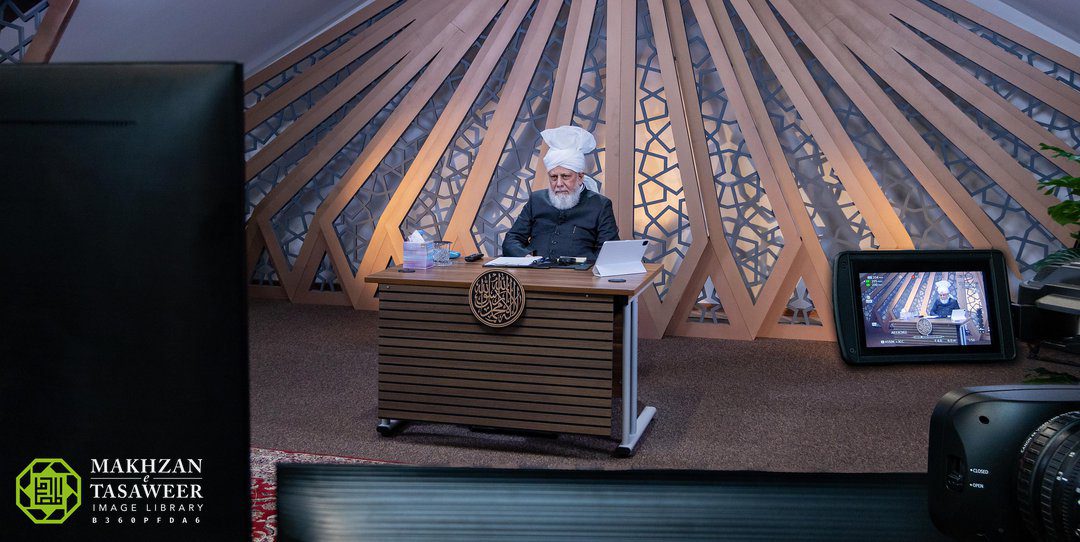 “Islam protects all the religions and has nothing to do with extremism, terrorism or destroying other religions or spreading the message of Islam with the sword.” – Hazrat Mirza Masroor Ahmad

On 30 October 2021, the World Head of the Ahmadiyya Muslim Community, the Fifth Khalifa (Caliph), His Holiness, Hazrat Mirza Masroor Ahmad held a virtual online meeting with members of Nasirat-ul-Ahmadiyya aged between 13 and 15 from Northern England and Scotland.

His Holiness presided the meeting from his office in Islamabad, Tilford, whilst members of Nasirat-ul-Ahmadiyya gathered at the Darul Amaan Mosque in Manchester. 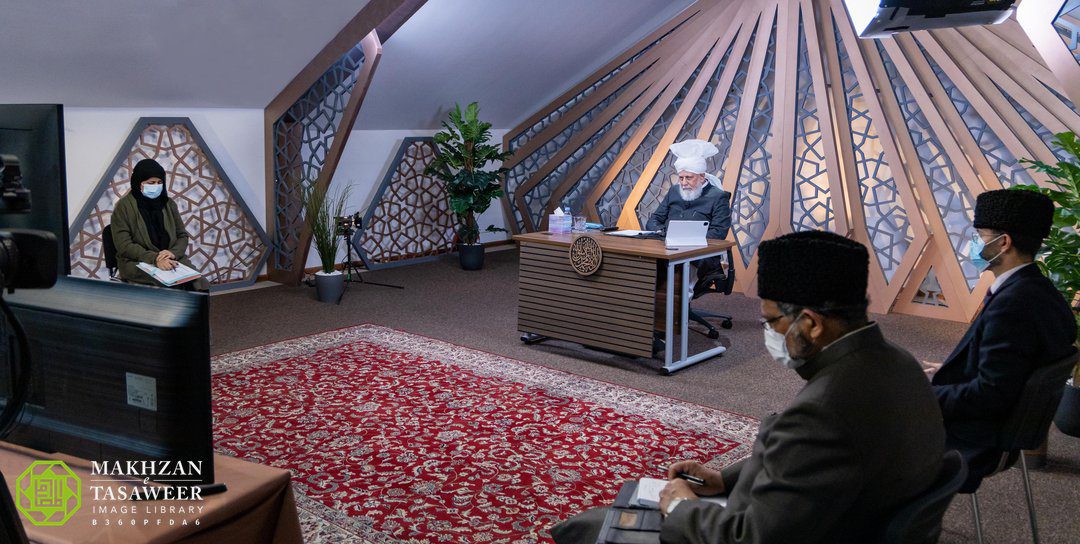 Following a formal session starting with recitation of the Holy Quran, members of Nasirat-ul-Ahmadiyya had the opportunity to ask His Holiness a series of questions regarding their faith and contemporary issues.

One of the attendees asked His Holiness’ views about issues related to mental health and depression amongst people in society.

“Often (mental health issues) are caused because we are involved too much in materialistic things. The preference order of our desires and our wishes has changed – instead of seeking Allah’s love and Allah’s closeness, we are running after worldly things. This is the main cause of it. And when the material desires are not fulfilled and you cannot get whatever you want, then you get frustrated and that frustration leads to anxiety. This is why Allah has said in the Holy Quran that remembrance of Allah is the best way to attain satisfaction of your heart and peace of mind. So, if you remember Allah whenever you have any problem – you bow before Him, you offer your five daily prayers fervently, sincerely – then Allah will give comfort and satisfy your heart and resultantly you will feel comfortable and better.”

“Most of the patients nowadays who are having an anxiety problem, it is because they are too much inclined towards worldly things. So, if you try to get closer to Allah the Almighty, then at least 80% of your anxiety will finish and go. So, you are lucky that Allah the Almighty has given you the chance to be a member of that community that is following the Reformer of the Age, the Promised Messiah (peace be upon him) whose advent was foretold by the Holy Prophet (peace and blessings be upon him). He asked us that instead of running after worldly things, strive to get closer to your Creator and that will give you satisfaction and comfort.”

Another member of Nasirat-ul-Ahmadiyya asked about what the need of religion is when without following a religion you can still do good deeds. 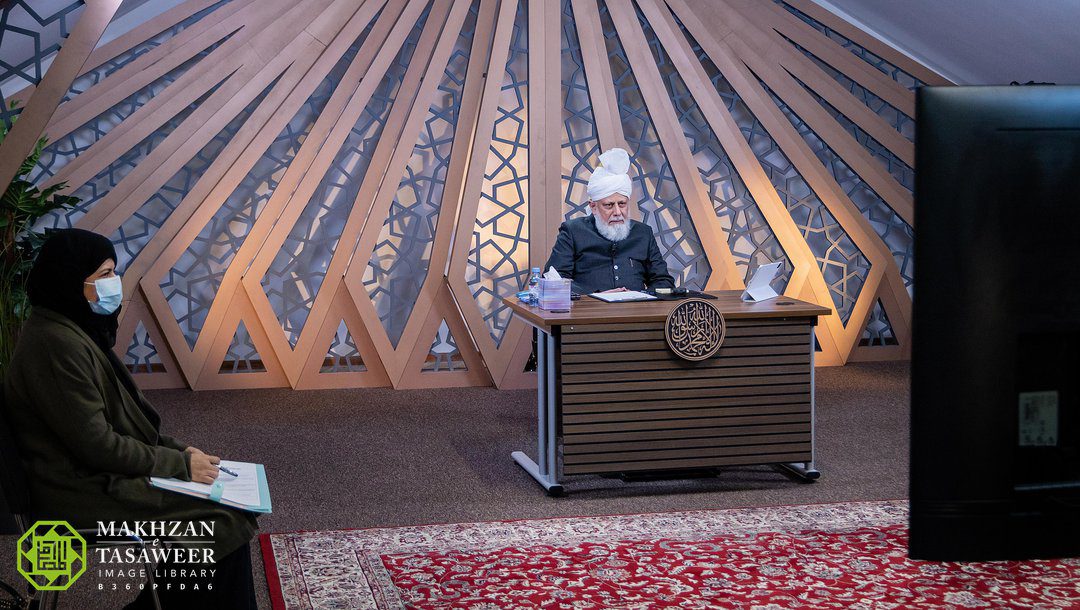 “As far as morals are concerned, an atheist can have good morals. He can have the quality of speaking truth all the time, whereas some believers or followers of the religion do not speak truth. They sometimes are liars and so, in that way, that atheist is better than those believers. But at the same time, even atheists admit that all the good morals came to this world, or were introduced to humanity, through messengers of God, through the prophets. So, that shows that it is religion that has brought good morals in this world for human beings.”

Another attendee mentioned that in her school lessons, they cover the topic of ‘terrorism’. She asked how she can help people understand that terrorism has no link or association with Islam.

“Islamic teachings have nothing to do with terrorism. Allah the Almighty says very clearly in the Quran that killing of a person is akin to the killing of the whole of mankind and saving the life of one person is as if you have saved the life of the whole of mankind. And the Holy Quran says that killing a person without reason will take you to hell. The Holy Quran says that killing a believer will lead you to hell. But what are Muslims doing? Muslims are killing each other. So all those who are killing each other, according to the teachings of the Holy Quran and the narrations of the Holy Prophet (peace and blessings be upon him), they will go to hell.” “Islam says that to spread Islam you must not use sword. Even when the first commandment of fighting back the enemies of Islam was given in chapter Al-Hajj of the Holy Quran, that clearly says that you have been granted permission to fight back – to retaliate against the enemies of Islam – because if now you leave them to do whatever they like then you will not see any religion on the face of the earth. You will not see any synagogue, any church, any temple or any mosque intact. So here where the permission is given to fight back, it is not to save Islam or to spread Islam! But, rather to save religion itself… So that shows Islam is not a militant religion. Rather, it protects religion. Islam is against all forms of terrorism and it is against all forms of extremism.”

“Whatever the present-day people (extremists/terrorists) are doing in the name of Islam, they are actually defaming the name of Islam. They try to misinterpret the verses of the Holy Quran in their favour, to falsely assert that (violent) Jihad is permitted and very much part of Islam… As I have already said, Islam protects all the religions and has nothing to do with extremism, terrorism or destroying other religions or spreading the message of Islam with the sword.”

Another attendee asked His Holiness how can one be like Syed Taalay Ahmed, who was martyred whilst serving the cause of Islam and the Ahmadiyya Muslim Community.

“Work hard for the cause of the Ahmadiyya Muslim Community. Spread the message of Allah the Almighty. Show your example as a good believer and a good Ahmadi Muslim girl so that people will see you and say that these are the girls who manifest the true portrayal of Islamic teachings. As far as martyrdom is concerned, Allah knows better whom he is going to give this status. But at least we should perform our duty by practicing Islamic teachings and portraying ourselves as the good believer and a good Muslim.”