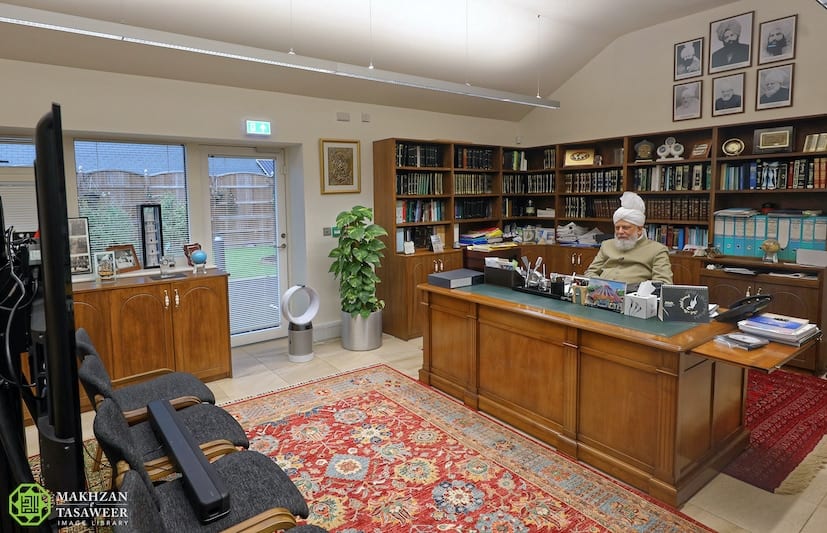 His Holiness presided the meeting from his office in Islamabad, Tilford, whilst the National Amila members joined from the Tahir Hall at the Baitul Islam Mosque complex, which serves as the National Headquarters of the Ahmadiyya Muslim Community in Canada.

During the seventy-five minute meeting, the Amila members had the opportunity to present a report about their respective departments and to receive the guidance and instructions of His Holiness on a range of issues.

His Holiness directed the National Missionary-in-charge Canada to ensure that all Missionaries serving in Canada were fully engaged in Tabligh (outreach) and Tarbiyyat (moral training) activities. His Holiness said that Missionaries had a key role to play in conveying the true teachings of Islam to the wider public and in ensuring the moral and religious training of Ahmadi Muslims. His Holiness instructed that Tabligh and Tarbiyyat programmes should be held online whilst COVID-19 restrictions remained in place.

Regarding the institution of Wasiyyat, His Holiness said that members of the scheme should recognise that financial sacrifice alone was not enough. Rather, according to the teachings of the Promised Messiah (peace be upon him), in every aspect of their lives, members of the scheme should seek to manifest the highest moral and religious standards. They ought to be true reflections of the teachings of Islam, seeking to convey its message far and wide and upholding the rights of their loved ones, fellow Ahmadi Muslims and all members of the wider society. 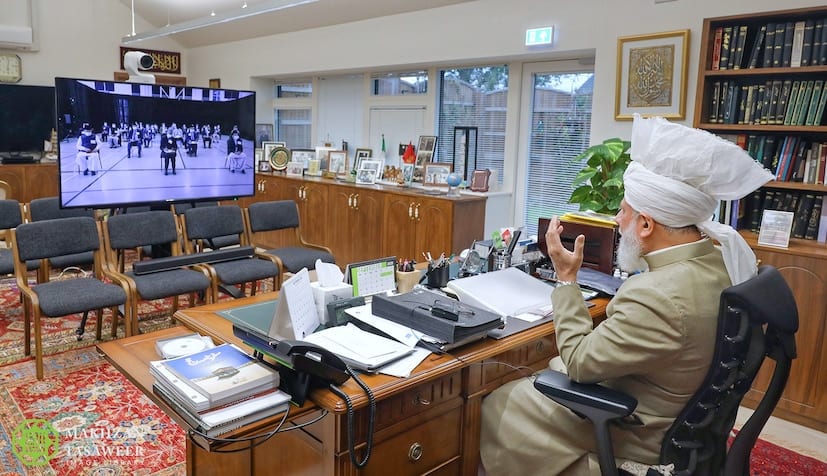 During the meeting, His Holiness instructed the National Amila members to always show care and consideration towards the general membership of the Ahmadiyya Muslim Community in Canada. Furthermore, it was the duty of the Amila to help those Ahmadi Muslims who were struggling in any way or facing personal difficulties such as unemployment.

“Many Ahmadi Muslims remain at home most of the time due to COVID-19 restrictions and this can lead to frustrations developing and for mental health issues such as depression to take hold. It is your duty to reach out to them and to try to lift their spirits and support them… Furthermore, the National Amila members should keep personal contact with Amila members at local and regional levels. Rather than only calling them for meetings or to obtain reports, you should build personal friendships with them. If they see that you genuinely care for them they will naturally be motivated to increase their service and to fulfil their duties better.”

His Holiness urged the National Amila members to cooperate with one another and with the administrations of the auxiliary organisations within the Ahmadiyya Muslim Community. Furthermore, he said it was imperative that each department had up-to-date data regarding their respective objectives so that issues or problems could be easily identified and addressed.

“It is essential for every Amila member to understand the objectives of their department and to work diligently and efficiently. The Nizam-e-Jamaat (organisational structure) is truly outstanding and if it is followed correctly the scale of our work will only ever increase. In terms of ‘emergency’ or ‘short-term’ projects no one else can compete or match the excellence and efficiency of our members, however in terms of working in a systematic way – focusing on long-term objectives – there remains room for improvement.”

Regarding the Waqf-e-Nau scheme, His Holiness sought an update of the progress of the scheme in Canada, where he had delivered a comprehensive Friday Sermon in October 2016 detailing the responsibilities and duties of the members of Waqf-e-Nau.

“Boys from the Waqf-e-Nau scheme should be encouraged to enter Jamia Ahmadiyya. Furthermore, we continue to require doctors, teachers and other skilled professions from amongst the Waqifeen-e-Nau who can serve in our hospitals and schools. We do not require Waqf-e-Nau who care only about the title [of ‘Waqf-e-Nau’] and are not interested in actually serving and fulfilling their pledges. The names of such people should be removed from the Waqf-e-Nau list so that the true numbers and picture of this scheme are clear. Anyway, the Waqf-e-Nau department should strive to motivate and guide the Waqf-e-Nau from childhood so that they are infused with the true spirit of service and so that their full potentials are realised for the sake of Allah the Almighty.”