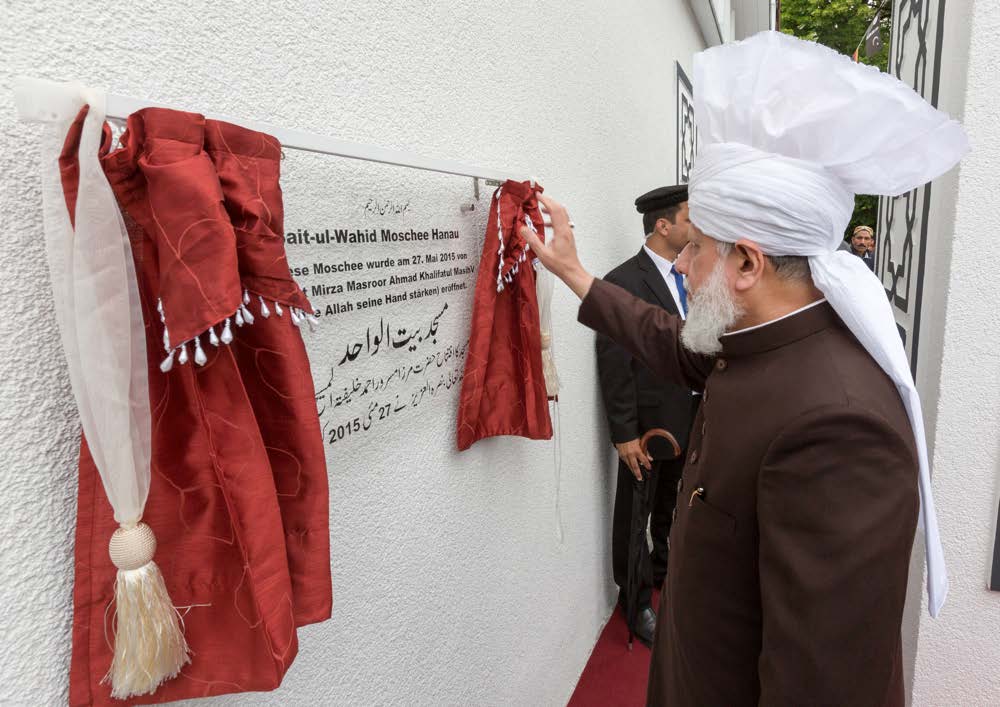 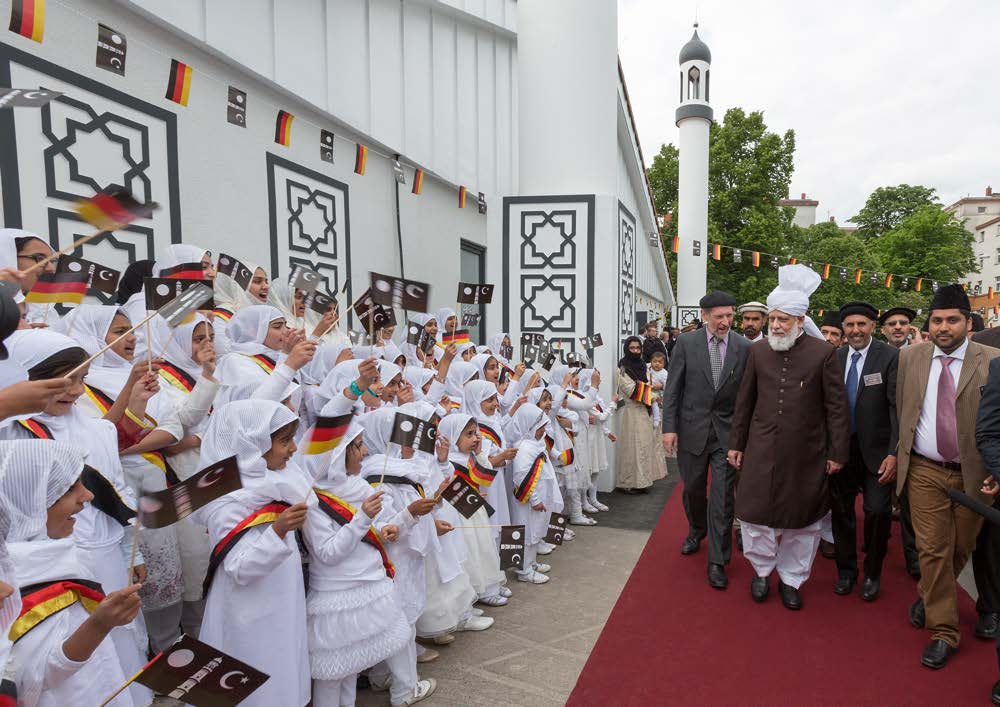 The opening of the new Mosque took place on Khilafat Day – marking 107 years since the institution of Khilafat (Caliphate) was established in the Ahmadiyya Muslim Community.

Upon arrival, His Holiness officially inaugurated the Mosque by unveiling a commemorative plaque and offering a silent prayer in thanks to God Almighty. His Holiness then led the Zuhr and Asr prayers at the new Mosque before planting a tree at the Mosque premises to further mark the occasion.

In the evening, a special reception, attended by more than 120 dignitaries and guests, was held to mark the opening of the Mosque. Various dignitaries and politicians such as Lord Mayor Claus Kaminsky and members of Germany’s National Parliament (Deutscher Bundestag) attended. 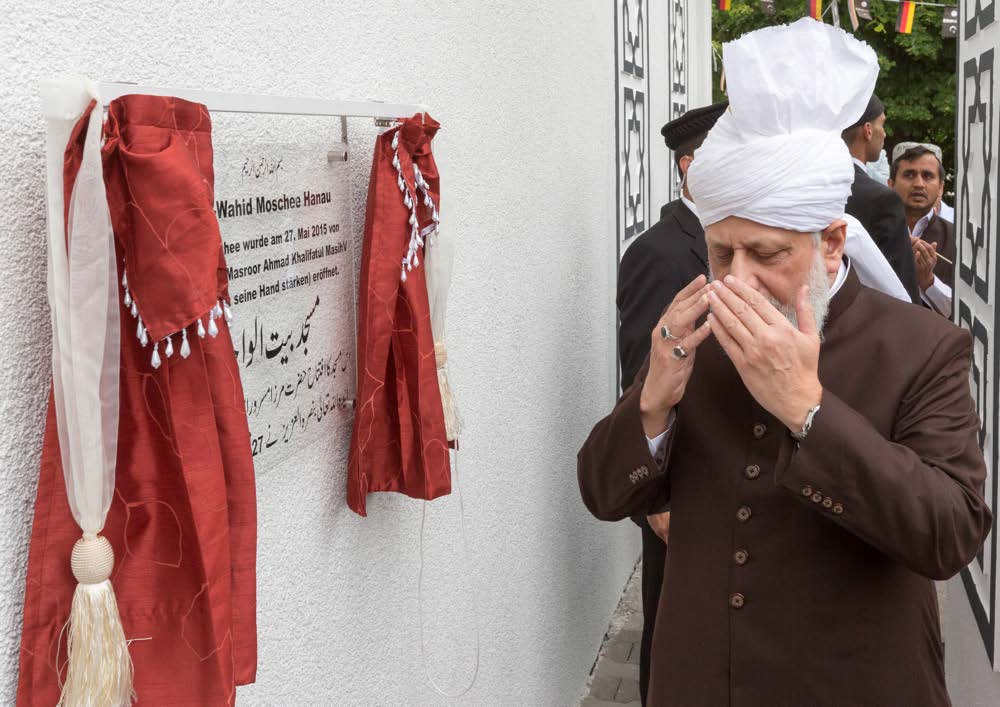 “I saw that the words Love for All, Hatred for None are displayed in the main hall of this Mosque and I consider this to be a very clear message of peace that you are giving not only to this city, to our society but in fact to the entire world.”

“The Ahmadiyya Muslim Community has proved itself to be extremely peaceful and tolerant. Your community has been at the forefront of removing the reservations of others about Islam through dialogue and mutual interaction.”

“This Mosque is an extremely positive addition to our area and proves that we can live together in peace and mutual respect. All of us together comprise Germany and it is important that we all understand this.”

“The Ahmadiyya Muslim Community is officially registered to provide the teachings of Islam within schools in the State of Hessen and this proves you are determined to help our State progress and develop.”

“I am extremely delighted that the Ahmadi Muslims in this area are now able to practice their faith at this Mosque. This day is a source of happiness for us all.”

Thereafter, the keynote address was delivered by Hazrat Mirza Masroor Ahmad during which he praised the people of Hanau for their spirit of open-heartedness and called for the founders of all religions to be respected.

“The inauguration of this Mosque is a purely religious function and so your attendance proves that you are people who wish to live together in peace. I would therefore like to express my heartfelt sentiments of gratitude to all of you. And my thanks is not uttered merely as a normal moral courtesy, but it is actually an essential part of my faith because the Holy Prophet Muhammad (peace be upon him) said that a person who is not thankful to mankind is not thankful to God Almighty.” 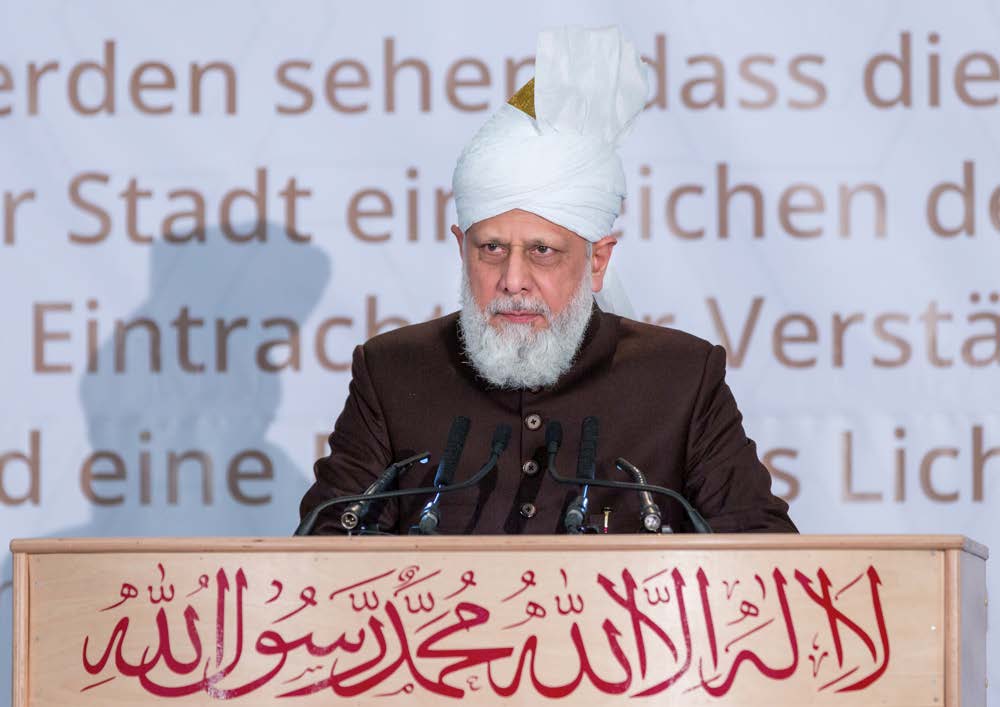 Referring to the fact that before its conversion into a Mosque, the existing building had been a local supermarket, Hazrat Mirza Masroor Ahmad said:

“Before this building was converted into a Mosque it was home to a supermarket where people would purchase groceries. However, now it has become a House of God where people will join together to worship God Almighty, to care for mankind and to foster peace. Thus this building will now provide love, care and peace for free to our neighbours and indeed to all people.”

Speaking about the need for peace in society, Hazrat Mirza Masroor Ahmad said:

“What has the world achieved or gained through conflict and disorder? During the World Wars millions of people lost their lives. Thus we should all realise that our joint goal should be a society where all people are able to live side by side in peace and harmony.”

Speaking about how respecting the beliefs of one another was a key element to establishing peace, Hazrat Mirza Masroor Ahmad said:

“The minarets of this Mosque are not erected for mere beauty or aesthetic reasons, but rather as a symbol of peace and of love for all of mankind. Thus, I pray that may this Mosque prove to be a beacon of peace in the world.”

Later, Hazrat Mirza Masroor Ahmad was interviewed by Germany’s national broadcaster RTL Television. During the interview, His Holiness said that the Ahmadiyya Muslim Community was engaged in efforts to promote dialogue and inter-faith harmony throughout the world. Thus, in 2014 the Ahmadiyya Muslim Community organised the Conference of World Religions at the Guildhall in London in order to promote interfaith tolerance and respect at a global level.