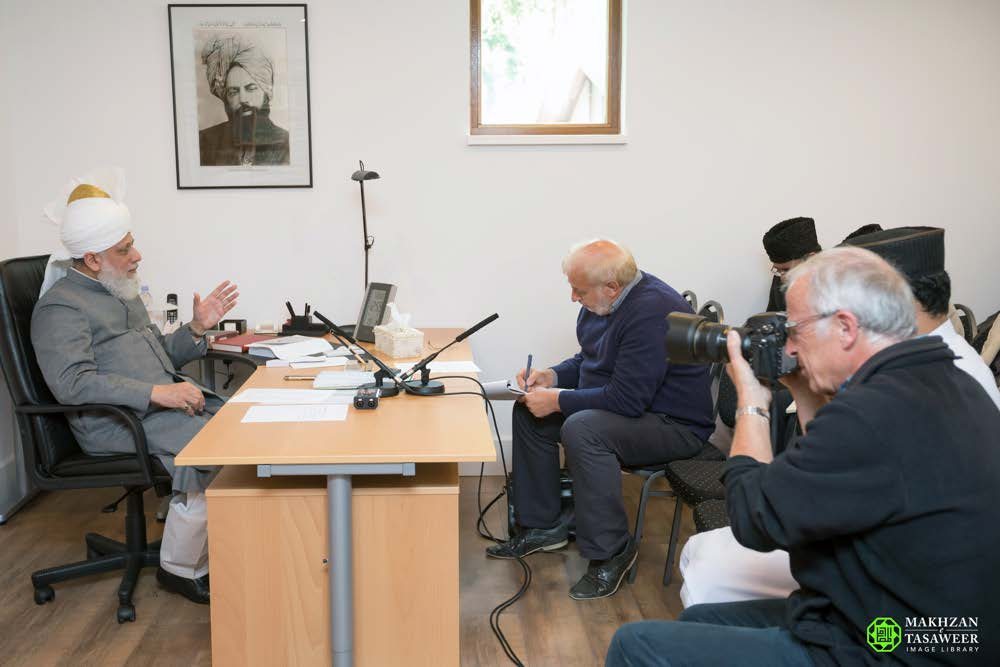 On 7 October 2015, the World Head of the Ahmadiyya Muslim Community, the Fifth Khalifa (Caliph), His Holiness, Hazrat Mirza Masroor Ahmad was interviewed by the Dutch newspaper De Stentor at the Baitun Noor Mosque complex in Nunspeet, Holland.

During the interview, His Holiness spoke of his fear that the world was moving towards another world war. He said his message to all nations was simply to

and to seek peace.

Upon being asked about the radicalisation of young and often well-educated Muslims living in the West, His Holiness said that many people were being

“brainwashed through the internet”

into believing that it was their duty to go to Syria or Iraq. His Holiness added that increased youth unemployment was also causing frustration and resentment amongst impressionable youths.

His Holiness said that terrorist groups were conducting the most horrific brutalities and were falsely justifying their evil acts in the name of Islam. He condemned the targeting of religious minorities such as the Yazidis and the destruction of historical monuments as completely against the teachings of the Holy Quran.

Asked if he considered himself to be a target of extremists, Hazrat Mirza Masroor Ahmad said:

“If I were to be fearful then I would not be able to fulfil my duties. Ahmadi Muslims are targeted in Pakistan, Indonesia and certain other countries but it will not stop us from fulfilling our mission, which is to spread the true teachings of Islam to every corner of the world.”

Upon being asked if he was frustrated by the fact more media coverage was given to terrorists, as compared to the peaceful teachings of the Ahmadiyya Muslim Community, Hazrat Mirza Masroor Ahmad said:

“I am not frustrated but it does lead me to bow down ever more and submit before Allah the Almighty in prayer. Thus, rather than becoming frustrated, we are drawn ever closer to our Lord and towards serving humanity. Most surely Allah is He who loves His Creation.”

His Holiness was asked if people were joining the Ahmadiyya Muslim Community ‘in reaction’ to terrorism and extremism.

“Yes it is possible that this is one reason because when people see and contrast the peaceful behaviour of Ahmadi Muslims to the acts of violent extremists, they are attracted by our message.”