Muslim leader calls for Media Responsibility in fight against Extremism 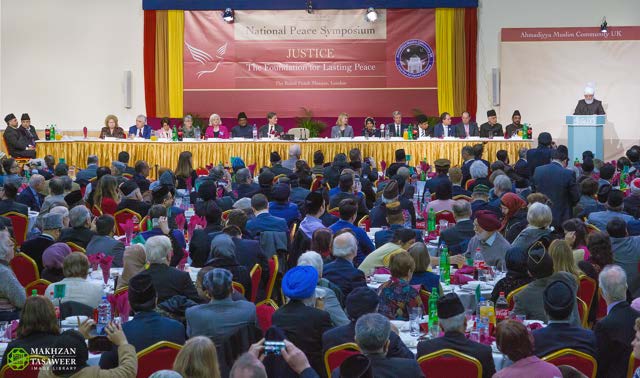 The event was held at the Baitul Futuh Mosque in London with an audience of more than 900 people, from 26 countries, including over 500 non-Ahmadi guests comprising Government Ministers, Ambassadors of State, Members of both Houses of Parliament and various other dignitaries and guests.

His Holiness also presented Ms Hadeel Qassim, with the Ahmadiyya Muslim Prize for the Advancement of Peace in recognition of her outstanding efforts to personally alleviate the suffering of thousands of refugee children stranded in dangerous and inhospitable camps in the Middle East.

During his address, His Holiness spoke of the fundamental need for justice and equity at all levels of society in order for genuine and long-lasting peace to be established.

He called on the media to use its influence

who were perpetrating mass cruelties falsely in the name of Islam. 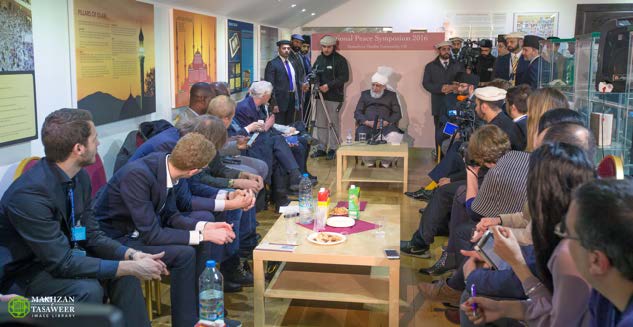 His Holiness also stated that there was no punishment for apostasy in Islam and that the Holy Quran was the standard-bearer for universal religious freedom. His Holiness reiterated the need to cut the supply lines and funding of all terrorist and extremist groups worldwide.

Hazrat Mirza Masroor Ahmad began his keynote address by reflecting upon the fact that modern day terrorism and extremism had caused a fear of Islam to spread far and wide.

“This event is taking place at a time when widespread fear of Islam is on the increase due to the horrific and disgraceful acts of terrorist groups such as Daesh. For example, last November, the world watched in horror when the terrorist attacks took place in Paris, and apart from this there have been suicide bombings and attacks in various countries at regular intervals.”

Nonetheless, His Holiness made it clear that true Islam was a religion of peace and that the brutal acts being committed by certain so-called Muslim groups were not permitted or justified by Islam in any way. 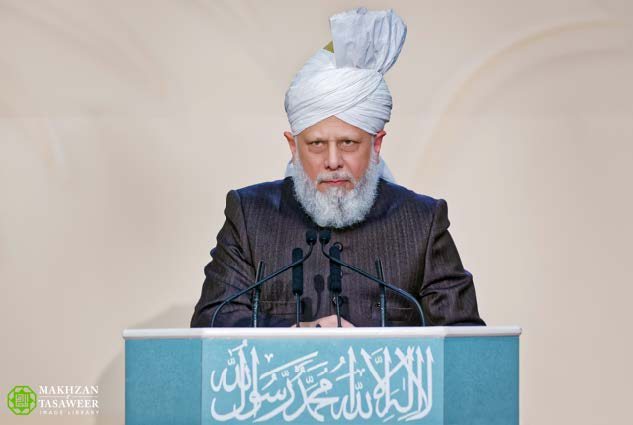 Where cruelty and injustice prevailed, His Holiness said that Islam advocated two methods in order to bring about peace and reformation.

“It is far better if peace can be attained through mutual dialogue, negotiations and diplomacy. However, where this is not possible, only then, force may be used in order to stop wrongdoing with the intention of establishing sustainable peace.”

“The philosophy underpinning punishment in Islam is extremely far-sighted and quite unique… Punishment or sanction is permitted not as a means of revenge or retribution but its purpose is to reform, rehabilitate and improve.” 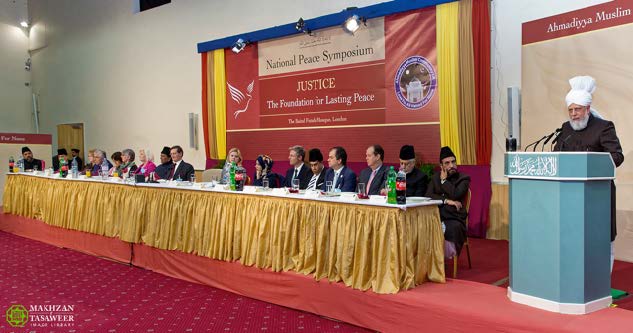 Refuting a common allegation levelled at Islam, His Holiness stated that there was no punishment for apostasy in Islam and that universal religious freedom was a core Islamic principle.

“Islam enshrines the principles of universal religious freedom and freedom of conscience. Faith is, and always will be, a matter of the heart and so there should never be any form of compulsion in religion.”

“If a Muslim decides that he wishes to leave Islam then, according to the teachings of the Quran, he or she has the right to do so. No government, group or individual has a right to punish them or sanction them in any way. Thus, the allegation that Islam mandates punishment for apostasy is entirely unjust and without foundation.” 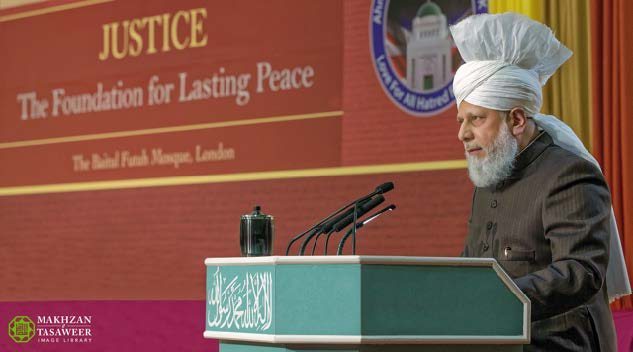 Challenging the media to use its influence as a force for good and to act with responsibility, Hazrat Mirza Masroor Ahmad said:

“There is no doubt that the media plays a huge role in influencing public opinion and so the media should use this power responsibly – as a force for good and as a force for peace. It should show the world what true Islam represents, rather than focusing on the merciless acts of the tiny minority.”

“Publicity is the oxygen sustaining most terrorist or extremist groups.” 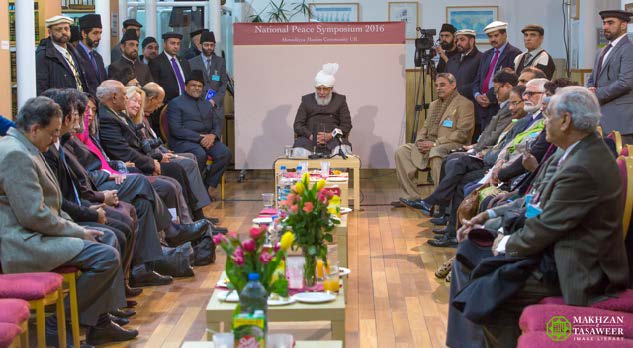 His Holiness said that the media did not waste any time in associating the brutal acts of terror committed by so-called Muslims to the teachings of Islam, whilst they ignored the voices of those who were earnestly striving to spread Islam’s true peaceful teachings.

“At a time of worldwide conflict, we should remember the basic principle that it is better for all forms of evil and cruelty to be suppressed and for all forms of goodness and humanity to be endorsed. In this way, evil will not spread far, whilst virtue and peace will spread far and wide and adorn our society.”

Speaking about the ongoing war in Syria, His Holiness said that the West should be

“willing to open the channels of communication”

with the Syrian Government in order to alleviate the desperate plight of the Syrian people.

His Holiness said that world governments or international organisations should prioritise peace over and beyond a desire for regime change. He said they should learn from the tragic examples of Iraq and Libya, wherein both countries had been mired in conflict and lawlessness ever since their long-standing leaders were forcibly removed.

Whilst His Holiness warned that there was a real risk of another world war he also stated that there was still time to avert such a catastrophe – if all parties were willing to act with justice and set aside their vested interests.

His Holiness criticised the continuing failure to cut off the financial supply lines of terrorist groups and the fact that certain powerful nations, who claimed to be working for peace, were exporting weapons to the Middle East that in turn were fuelling wars taking place in Syria, Iraq and Yemen.

“When it comes to acquiring oil, morality goes out of the window.”

“Whilst it is claimed that all possible efforts are being made to eradicate terrorism and extremism, the evidence does not substantiate this claim.”

“I pray that we all play our respective roles in furthering the cause of humanity and I pray that true peace, based upon justice, is established in all parts of the world.”

“The Ahmadiyya Muslim Community focuses on education, humanitarian work and the Jihad of self-Improvement and of spreading peace.”

Siobhain McDonagh, MP and Chair of the ‘All Party Parliamentary Group for the Ahmadiyya Muslim Community’ said:

“The Ahmadiyya Muslim Community contributes greatly to this country and your belief in peace and religious tolerance is an example to us all, as you would expect from a community whose motto is ‘love for all, hatred for none’.”

“For over a century the Ahmadiyya Muslim Community has taken a stand against hatred but you have faced it down with compassion, love and practical help to bring communities together.”

“There can be no better example of [countering extremism] than that exemplified by the Ahmadiyya Muslim Community under the Divine and inspirational leadership of His Holiness, Hazrat Mirza Masroor Ahmad.”

Both before and after the proceedings, His Holiness met personally with various dignitaries and guests also held a press conference with members of media. 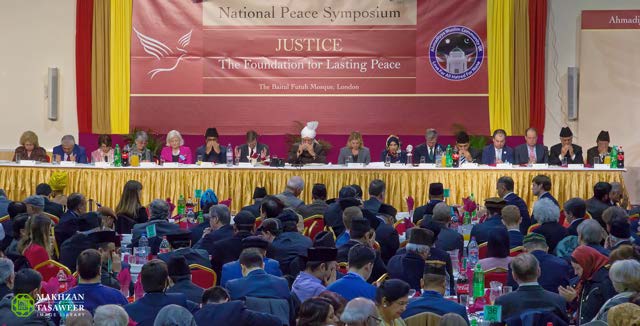