“As rivalries ferment and hatreds become ever more deeply entrenched, no one knows where such issues will finally lead us or how horrific the consequences will prove to be” – Hazrat Mirza Masroor Ahmad

The event was held at the Baitul Futuh Mosque in London with an audience of more than 1000, including 700 dignitaries and guests from 30 countries, including Ministers, Ambassadors of State, Members of Parliament.

During the event, His Holiness presented Dr. Fred Mednick, founder of Teachers Without Borders, with the Ahmadiyya Muslim Prize for the Advancement of Peace in recognition of his efforts to provide unfettered access to education to some of the most neglected parts of the world.

Hazrat Mirza Masroor Ahmad began his address by stating that the Ahmadiyya Muslim Community would never waver from its efforts to promote peace and justice in the world.

His Holiness warned that rivalries between nations were intensifying and new battle lines were being drawn that could prove disastrous.

His Holiness highlighted that nuclear war was no longer a remote or distant prospect, but rather a growing threat that could no longer be discounted or ignored.

He mentioned a number of pressing catalysts including tensions between nuclear powers, conflicts and proxy wars in the Middle East, far-right nationalism, anti-immigration sentiments, economic frustrations and isolationism that continue to push nations towards nuclear war and global destruction.

Hazrat Mirza Masroor Ahmad warned of the catastrophic nuclear destruction that could ensue if nations did not show tolerance or strive to break down the causes of division between them.

“If there is a nuclear war, we will not only be destroying the world today but we will also be leaving behind a lasting trail of destruction and misery for our future generations. Hence, we must pause and reflect on the consequences of our actions. We should not consider any issue or conflict, whether within a country or at an international level, to be insignificant.” 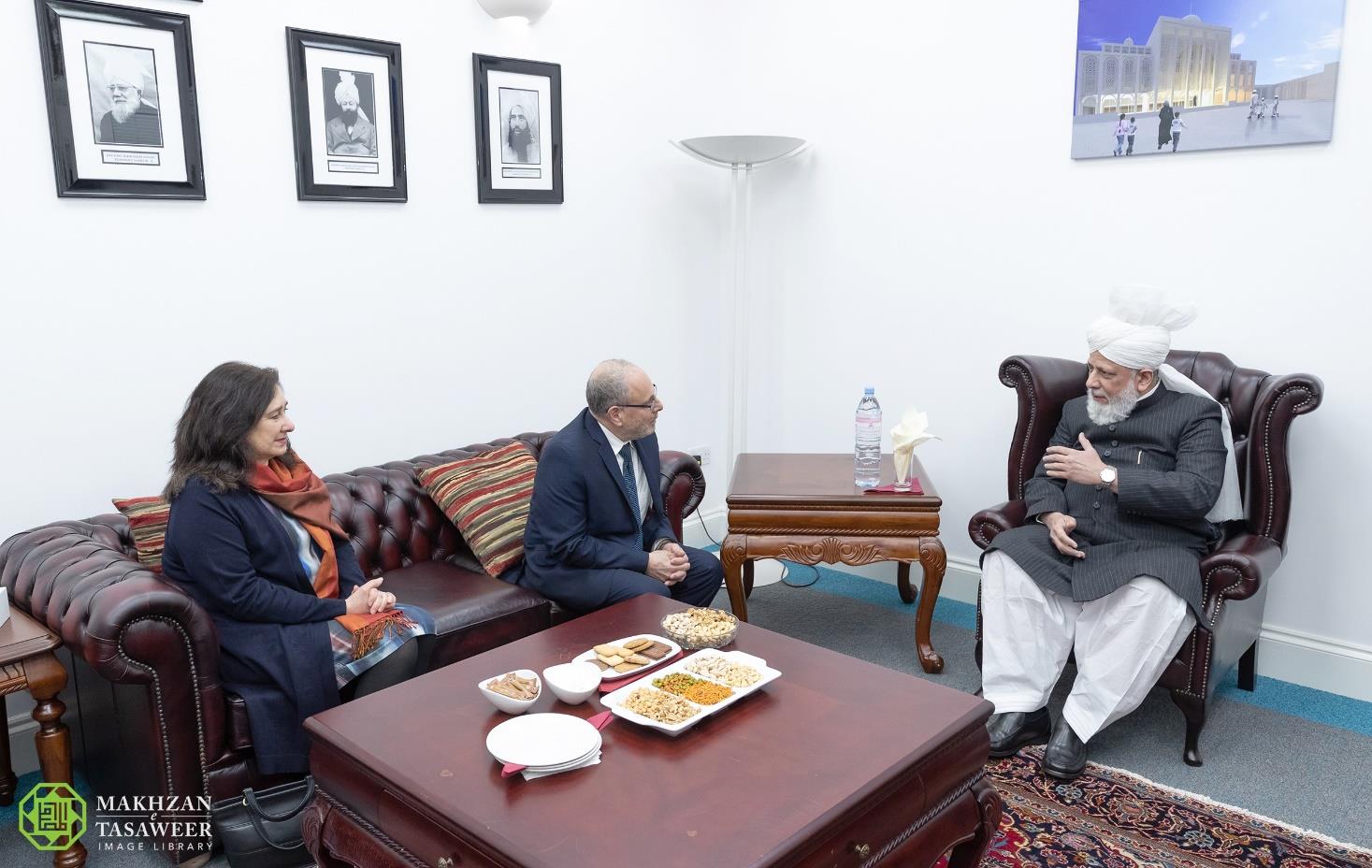 “During the past year, the United States claimed with a degree of confidence that it was close to securing an historic peace deal with North Korea but in recent days it has become clear that nothing of substance has been achieved.”

“In recent days, the world witnessed a sudden escalation in tension between India and Pakistan. Both countries are nuclear powers and both have built alliances with other nations, whether openly or in secret, which mean that the potential consequences of a war would be extensive and far-reaching.” 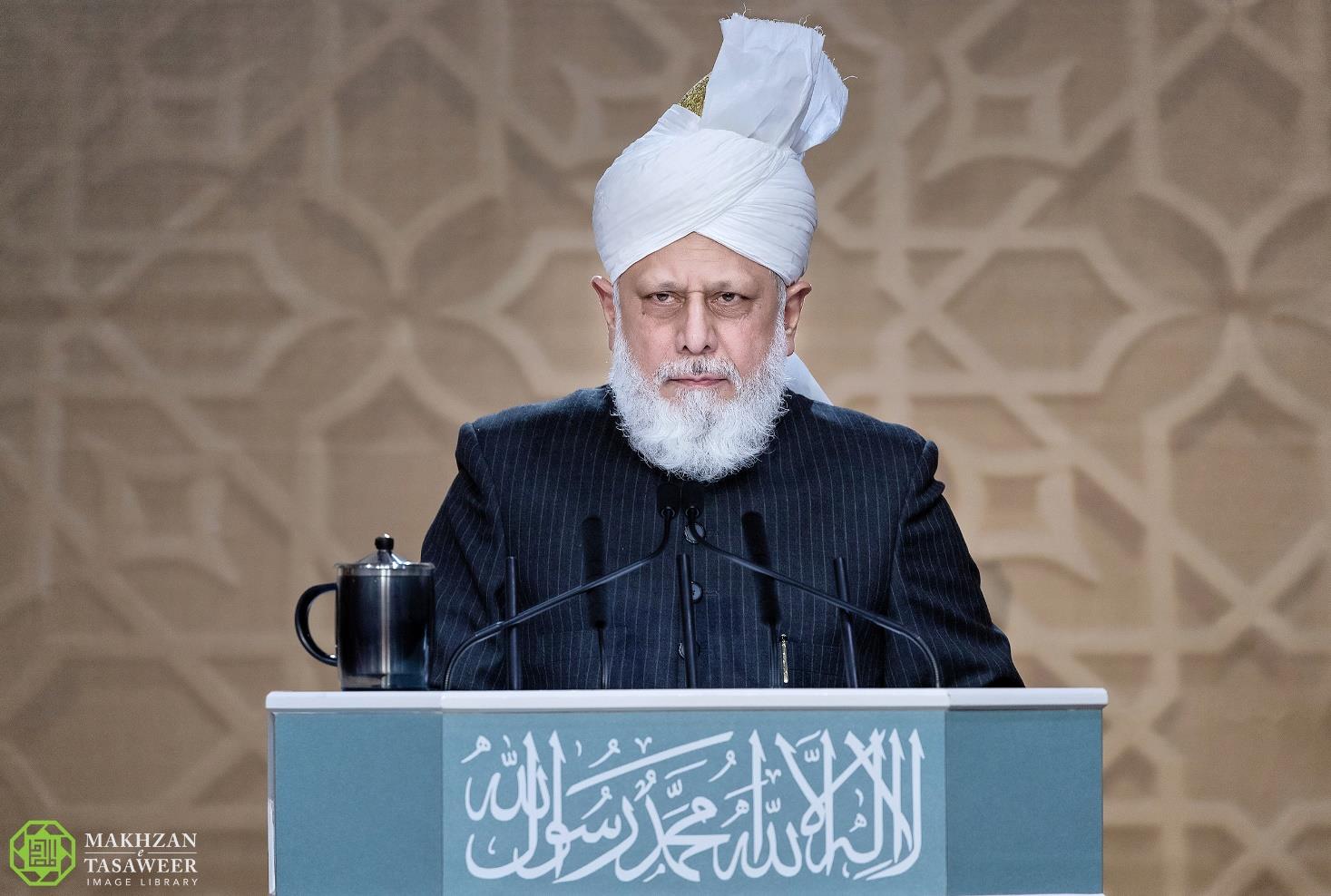 His Holiness stated that nations are using conflicts in the Middle East as a tool to create dominance by building alliances and igniting further conflict.

“On one side, Russia and Turkey are aligning, whilst on the other side, the United States and Saudi Arabia are joining together and are ratcheting up pressure on Iran and seeking further sanctions against them. Political experts are openly expressing that the objective of these nations is to dominate the Middle East.”

“Time and again, we have seen examples of countries that have intervened in war-torn nations or given aid to deprived countries on the pretext of bringing peace but have attached strings that enable them to take control of the weaker country’s resources. Rather than being content with their own wealth, powerful countries seek to assert their control over weaker nations.”

His Holiness cited Syria as an example of a war that had caused endless misery and remained in a precarious state.

“Over almost a decade, Syria has been ravaged by bloodshed and torn asunder. It is said that the civil war is now edging towards an end but what has the past decade achieved except the death of hundreds of thousands of innocent people and the displacement of millions of others? Nothing positive has emerged and the future remains uncertain and precarious, as tensions rise between nations who have their own vested interests tied into the future of Syria.”

He mentioned that although these nations attempted to defeat extremist groups like Daesh in the Middle East, they have in reality, only allowed their hateful teachings to spread further.

“It is said that the terrorist group Daesh is on the verge of collapse and that their so-called Khilafat is finished. Yet experts also warn that though Daesh has lost its territory, its hateful ideology persists and its members who have survived are now scattering and could eventually regroup and perpetrate attacks in Europe or elsewhere.”

Hazrat Mirza Masroor Ahmad also emphasised that nationalism continues to rear its ugly head and that far-right parties are gaining popularity globally. He explained that a core reason underpinning far-right popularity has been widespread immigration.

His Holiness further explained that feelings of resentment stem from the belief that existing indigenous citizens are being short-changed in order to fund and support immigrants. He provided both a long term and a short term solution to resolve this pressing issue.

“The long-term solution to the immigration crisis has to be to establish peace in war-torn countries and to help the local people, who have been forced to endure lives of misery and danger, to live peacefully.”

“In the short term, where refugees or asylum seekers come to the West due to the prevailing political or religious conditions in their own countries, they should be treated with dignity and respect. At the same time, whatever support they are given should not be at the expense of existing citizens. Immigrants should be strongly encouraged to enter employment as soon as possible, rather than living off benefits for long periods. They should work hard, seek to stand upon their own two feet and contribute positively to their new society. Otherwise, if they are continually funded by tax-payers money it will inevitably lead to grievances.” 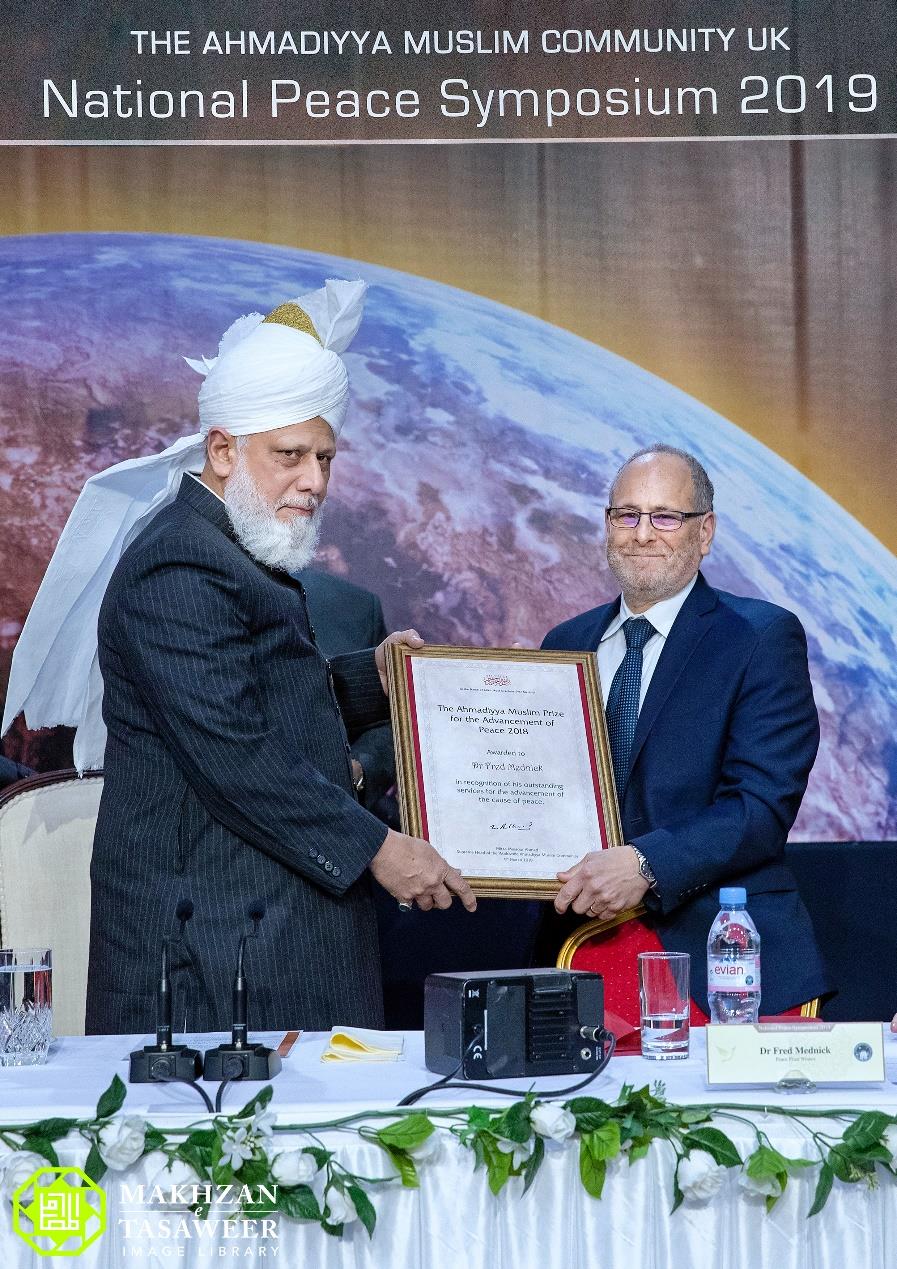 Furthermore, Hazrat Mirza Masroor Ahmad stated his belief to be, that the underlying cause of most resentment in society tends to be economic and financial frustration and that this inevitably leads to the spread of Islamophobia and xenophobia.

“Certain groups take advantage of such anxiety by laying the blame at the feet of immigrants or at the followers of religion and incite sentiments of hatred towards them. Thus, an impression has developed in Europe that Asians, Africans and particularly Muslim immigrants are a threat to society. In the United States, there are similar fears regarding Muslims and also Hispanics seeking to enter the country through Mexico.”

His Holiness explained that the root cause of frustration and the resulting hostility, whether in the East or the West, is economic injustice and so it is essential that a concerted effort is made to bridge the economic divide amongst nations and their people.

He stated that if such countries, that have been centres of war or division, are enabled to prosper economically, they will no longer harbour frustrations or bear hatred for other nations. Nor will their people be forced to migrate.

Hazrat Mirza Masroor Ahmad also addressed the widespread uncertainty and anxiety in the UK regarding Brexit and the UK’s future relationship with the European Union.

His Holiness mentioned that he made his views on Brexit very clear during an address at the European Parliament in 2012, when he stated that the strength of Europe lies in its remaining united and together as one.

“In my speech seven years ago, I focused upon the importance of removing the fears of the public about immigration and emphasising the benefits of unity. However, people’s concerns were not adequately addressed and so, increasingly, people across Europe have come to question the benefits of the European Union…Hence, where I had hoped for greater unity in Europe, the past few years have witnessed increased division and turmoil.”

“The Islamic viewpoint is that peace can best be achieved through unity. Yet, regretfully, instead of uniting, we are seeking separation and prioritising our individual interests over the collective interests of the world. I believe that such policies will, and already are, undermining the world’s peace and security.”

“To get an accurate portrayal of Islamic governance and leadership we should look to the era of the Founder of Islam, the Holy Prophet Muhammad (peace and blessings be upon him). After the Holy Prophet (peace and blessings be upon him) migrated to the city of Medina, he formed a covenant with the Jewish people, whereby the Muslims and the Jewish citizens were to live together peacefully and with a spirit of mutual sympathy, tolerance and equity.”

“The covenant proved to be a magnificent charter of human rights and governance and ensured peace between the different communities living in Medina. According to its terms, all people, regardless of their faith or ethnicity, were bound to respect the rights of one another. Freedom of belief and freedom of conscience were cornerstones of that treaty.”

Hazrat Mirza Masroor Ahmad concluded his address by praying for the long term peace of the world.

“May Allah the Almighty enable true peace to emerge and may the long shadows of war and conflict that hover above us be replaced by blue skies of peace and prosperity. I pray for an end to the frustrations and deprivation that have plagued the lives of countless people and have fuelled devastating wars and grievances across the world…I pray that we show tolerance of each other’s beliefs and customs and value the diversity within our societies. I pray that we come to see the best in humanity and use each other’s strengths and skills to build a better world for our children and to cultivate lasting peace in society.”

Prior to the keynote address, a welcome address was delivered by Rafiq Hayat, the National President of the Ahmadiyya Muslim Community.

Thereafter, the Most Reverend Kevin McDonald, Archbishop Emeritus of the Roman Catholic Archdiocese of Southwark thanked the Ahmadiyya Muslim Community for its strong resolve in promoting peace.

The Most Reverend Kevin McDonald said:

Whilst accepting the Ahmadiyya Muslim Prize for the Advancement of Peace, Dr. Fred Mednick, founder of Teachers Without Borders, said:

“With this award, Your Holiness, the Ahmadiyya Community has heard the teacher’s voice and has heard the teachers song…I can only say here today, honoured by the hospitality and warmth and openness of this community, [that] it is a special honour to receive this award; we shall do our best, Insha’Allah [God willing], to reach every teacher we can on this planet and even more teachers and more children in those small places everywhere on Earth.” 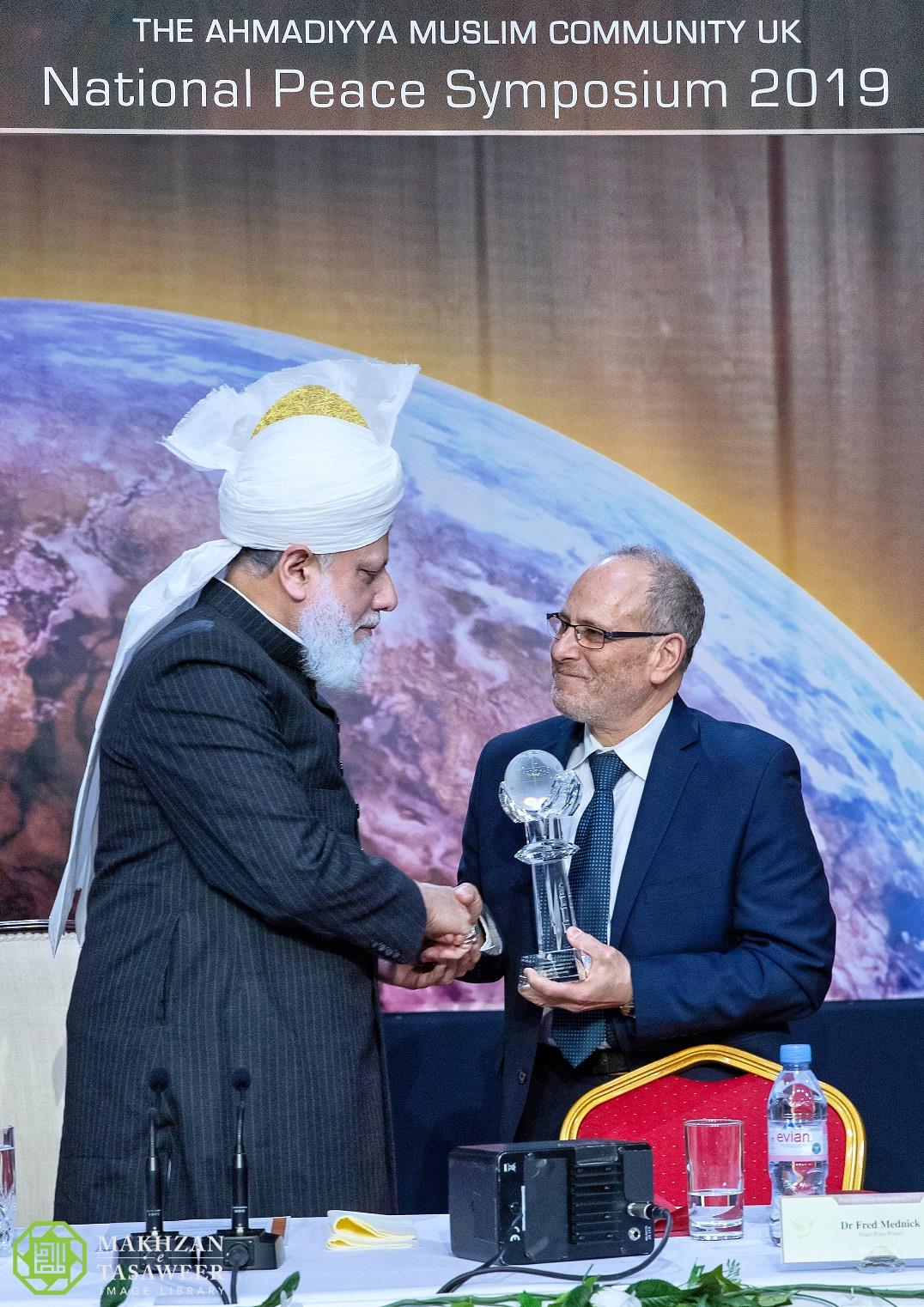 Both before and after the proceedings, His Holiness met personally with various dignitaries and guests and held a press conference with journalists and members of the media.