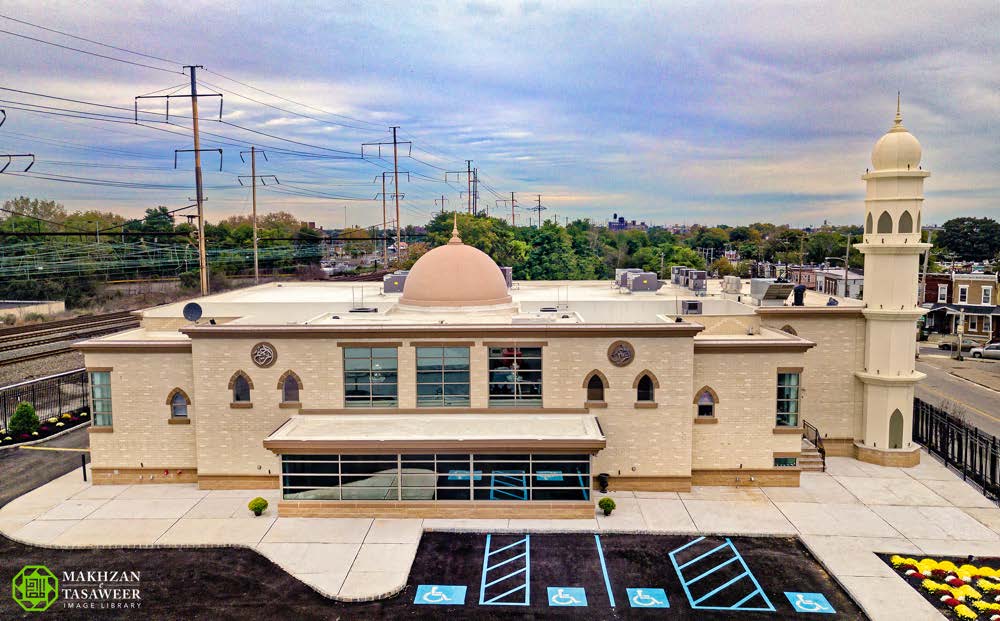 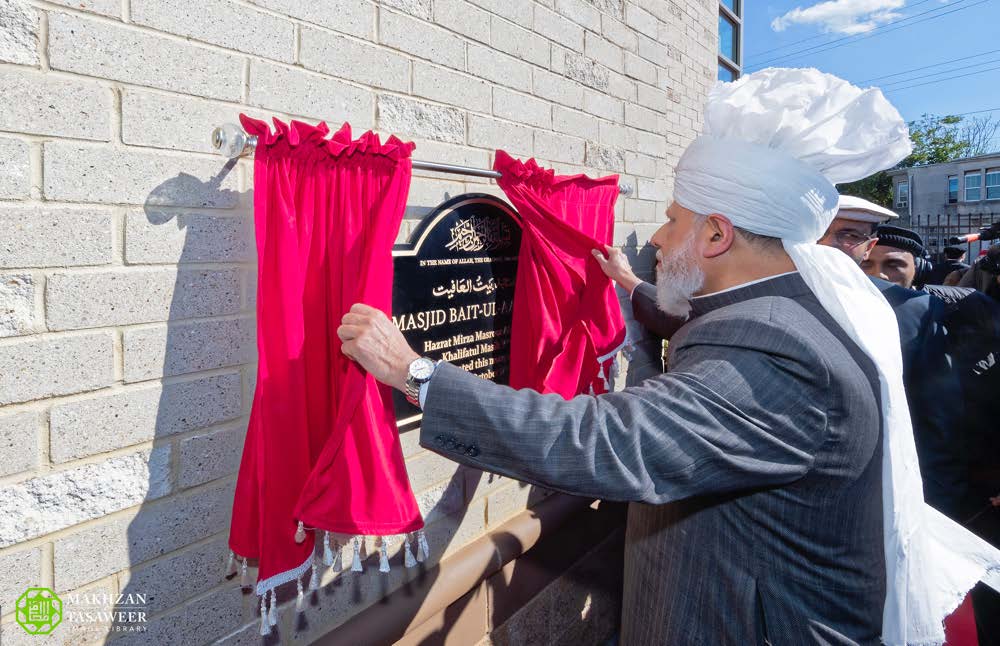 His Holiness delivered his weekly Friday Sermon from the Mosque, which was broadcast live around the world on MTA International.

In his sermon, His Holiness reminded the worshipers that it is not enough to simply celebrate the opening of the new Mosque, rather it was incumbent upon Ahmadi Muslims to fulfil the true purposes of Mosques by joining together for the worship of Allah the Almighty and preaching the true peaceful teachings of Islam.

His Holiness called on the worshipers to self reflect and analyse to see if they are fulfilling the rights owed to Mosques. 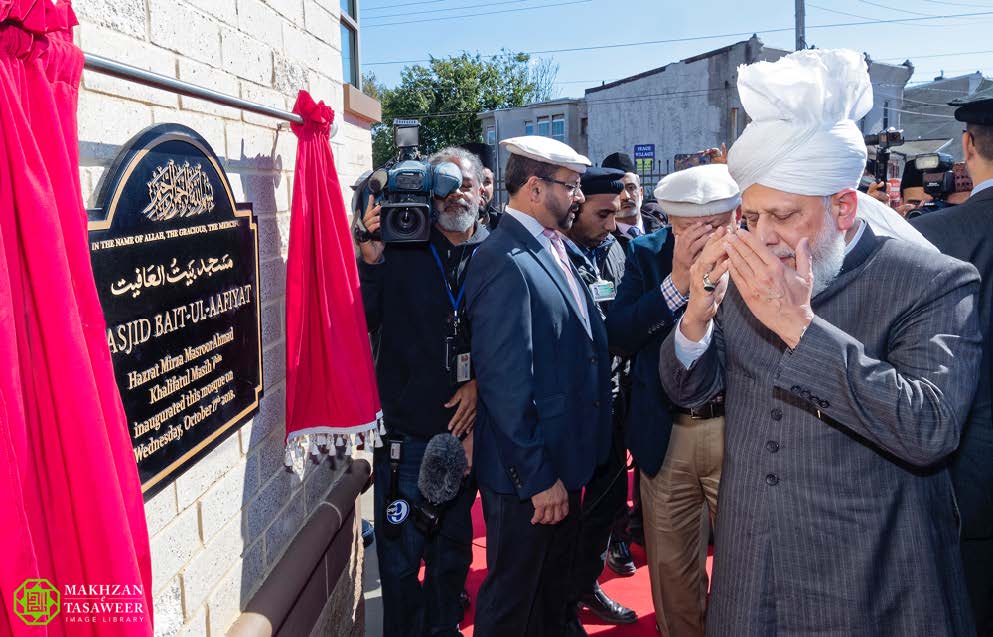 “When we ardently seek to fulfil the true purposes of building a Mosque, we will see the blessings and benefits of the Mosque in this very life. Our children and future generations will remain attached to their faith and we will be those who enlighten the locals of the true peaceful message of Islam. We will become those who will establish the Oneness of God and will spread the message of the Holy Prophet Muhammad (peace and blessings be upon him) across the globe.” 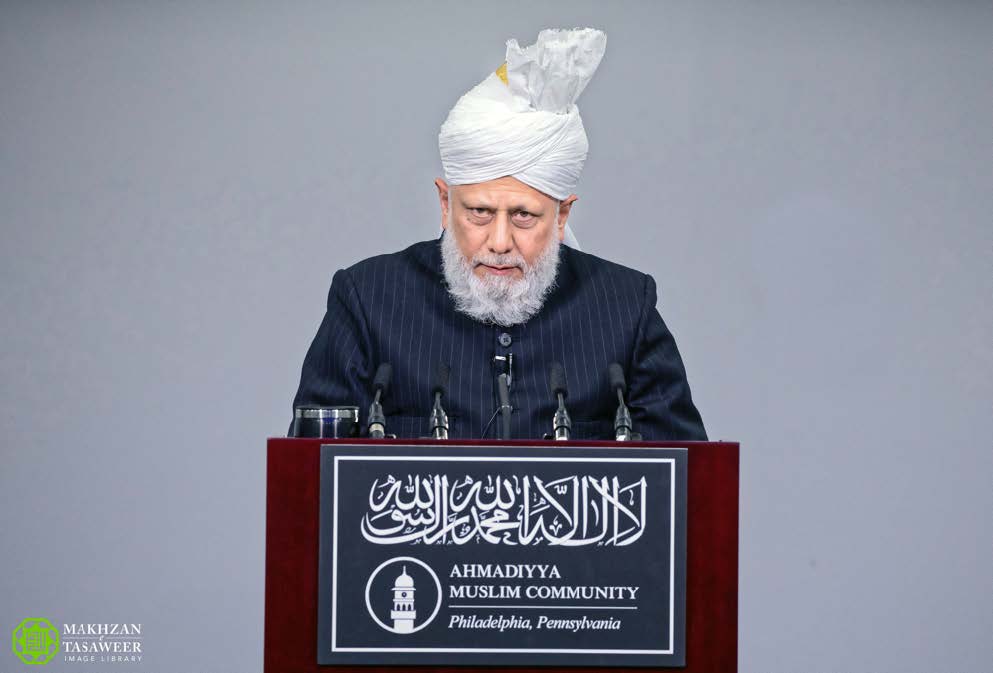 His Holiness emphasised the importance of spreading the peaceful teachings of Islam and narrated that the Founder of the Ahmadiyya Muslim Community, the Promised Messiah (peace be upon him) had stated that wherever a person wishes to propagate Islam they should build a Mosque in that area.

Hazrat Mirza Masroor Ahmad observed that despite a multitude of prayer centres established by different Islamic sects, the Baitul Aafiyat Mosque was the first purpose-built Mosque in Philadelphia.

“It is said that this building has been constructed as the first purpose-built Mosque of Philadelphia. This Mosque should not merely show the locals what the physical attributes of a Mosque are, rather it should manifest the true beautiful and peaceful attributes of the teachings of Islam for the whole world to see and observe.”

“We, Ahmadi Muslims, are those who spread the peaceful teachings of Islam around the world with prayer and worship and we must now endeavour to do this more than ever before through setting the best moral examples.”

Thereafter, His Holiness mentioned that when the first Ahmadi Muslim missionary in the United States, Mufti Muhammad Sadiq came to America in 1920, he landed at the port of Philadelphia. He was denied entry into America for two months and was unjustly imprisoned. Whilst in captivity, he showed such high morality and righteousness that fifteen people accepted Islam through him. Later, over 5000 people accepted the teachings of the Ahmadiyya Muslim Community through him.

Reflecting upon the rich history of the Ahmadiyya Muslim Community in Philadelphia and America, Hazrat Mirza Masroor Ahmad said:

“The Ahmadiyya Muslim Community has been established in this area for over a century. Now that Allah the Almighty has granted a beautiful Mosque in this area, it is the responsibility of the local Ahmadi Muslims and the local Imam to reach out to the local population with a reinvigorated spirit and resolve in order to spread the beautiful message of Islam far and wide.”

“The local area around the Mosque should become such a peaceful abode that people try to come and find a place of residence here. In terms of population, this city is the sixth largest in America. If the peaceful message of Islam is spread in this area, we will see that from amongst the residents of this city, such people will be born who will fear Allah, will be rightly guided and will regularly attend Mosques and become true worshipers of God.”

“Every Mosque that we build presents us with a great challenge and that challenge is to reform ourselves and improve our relationship with God Almighty and our moral conduct. We must also increase our efforts to reach out to the locals with the true message of Islam.”

His Holiness narrated a saying of the Holy Prophet Muhammad (peace be upon him), which states:

“The one who enters our Mosque with the intention of learning something good, that person is like the one who strives to do Jihad in the path of God.”

“Nowadays the religion of Islam is defamed by wrongly alleging that it commands Muslims to wage a violent Jihad and certain Muslims are also responsible for creating this image through their hateful acts. However, a true believer is the one who learns goodness, acts upon it and spreads it within society. Such a believer engages in a true Jihad of peace, love and kindness. This is the true Jihad that we as Ahmadi Muslims must carry out in this day and age.”

His Holiness concluded his Friday Sermon by praying for the attendees and said:

“May Allah enable Ahmadi Muslims to fulfil its true objectives and may the Mosque prove to be an important milestone in spreading the peaceful message of Islam in this area.”

The plot for the Mosque was purchased in 2007 and is based on a large four-acre piece of land. The complex hosts a Mosque with prayer halls for both men and women capable of accommodating about 700 people, a multi-purpose hall, a missionary’s residence, numerous offices, kitchen and large parking facilities with space for further development.