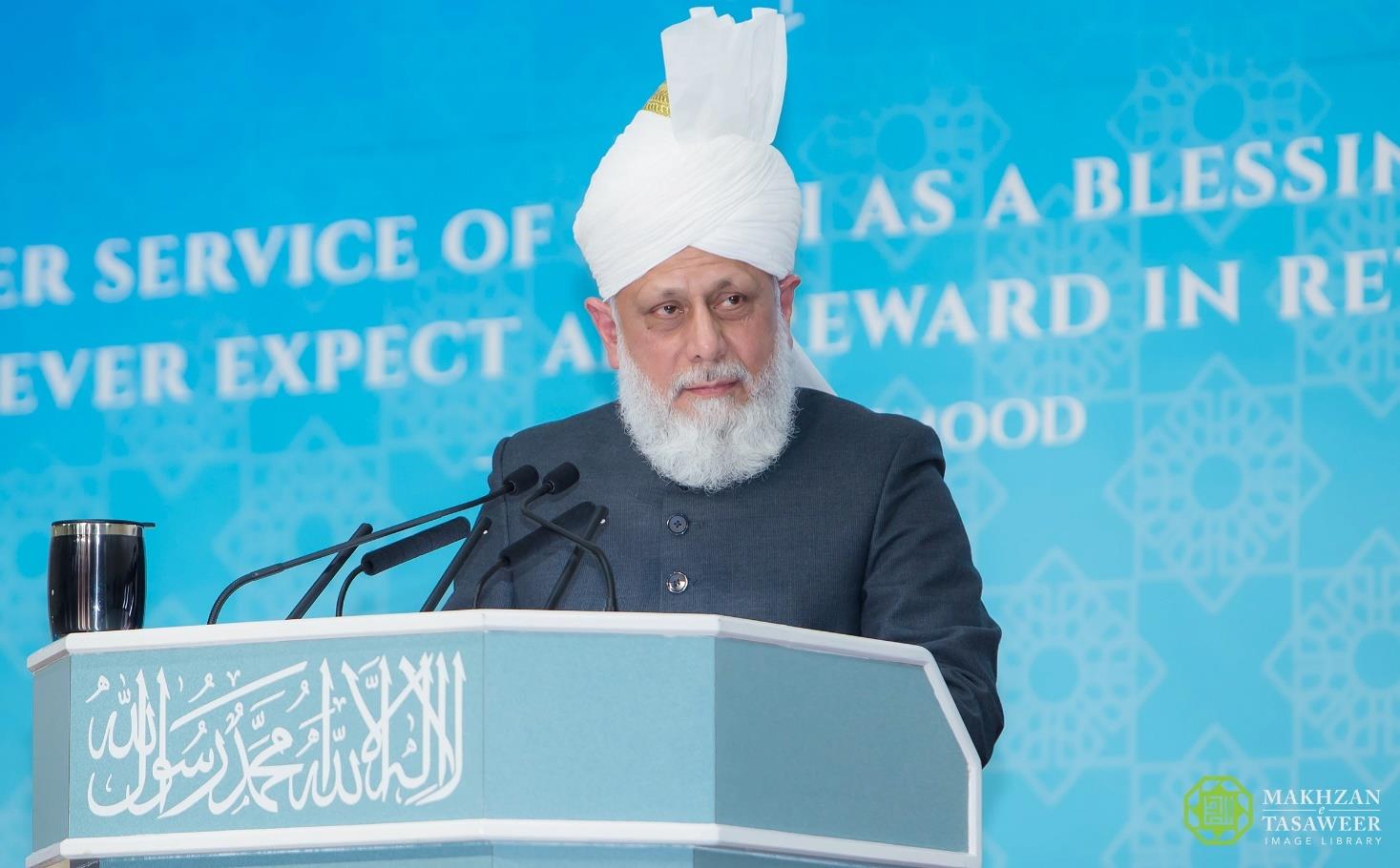 The two-day event, held at the Baitul Futuh Mosque in London and attended by over 1,400 Ahmadi women, was aimed at encouraging and improving positive work ethic amongst the office bearers of Lajna Imaillah.

His Holiness began his address by stating that office bearers must seek to serve God Almighty with sincerity at all times.

“You must always remember that offering one’s services for the Ahmadiyya Muslim Community can never prove blessed unless it is conducted solely for the sake of attaining the pleasure of Allah the Almighty and is based upon righteousness.”

“As office bearers, it falls upon you to hold aloft the light of Taqwa (righteousness) to guide others through the dark. And for you to illuminate the path for others in this way, it is necessary that your own conduct is exemplary and according to the teachings and principles of Islam.”

His Holiness particularly emphasized the need to adopt humility and avoid arrogance.

“Certainly, those Ahmadi Muslims who have been entrusted with responsibilities in the Ahmadiyya Muslim Community and whose duty it is to ensure the moral and spiritual education and well-being of the members of the Community, can never be successful if they fall prey to arrogance or consider themselves to be superior in any way.”

The Caliph mentioned the need for office bearers to fulfill the responsibilities within their homes and said they should set the best examples for their family members.

“Office bearers must be role models in terms of the worship of Allah the Almighty. They must set the best example of morality and virtue within their homes for their own children to learn from. Indeed, office bearers should seek to ensure that their homes remain peaceful, virtuous and havens of spiritual contentment.”

Whilst speaking about the importance for Ahmadi Muslim women to feel proud of the teachings of Islam, Hazrat Mirza Masroor Ahmad said:

“In terms of your religion, you must not feel any type of embarrassment or hold an inferiority complex regarding any issue or Islamic teaching. Rather, you should be proud of your religion and openly practice and preach its teachings through your words and deeds. This is not exclusive to office bearers, but they certainly have a particular duty to set the best example in this regard.”

His Holiness also drew the attention of the office bearers towards avoiding bad company and gatherings as it went against the essence of righteousness.

“Righteousness requires a person does not sit in those gatherings where Allah the Almighty or His Messenger (peace be upon him) are insulted in any way. Indeed, believers should abstain from all gatherings where people are mocked or spoken ill of.”

“For instance, it is completely wrong to remain present when people speak against one’s brother or sister, even if they do not personally take an active part in the discussion. In the sight of Allah, merely to sit silently whilst such discussions are taking place is against the principle of righteousness.”

Whilst dealing with the issue of balancing their work for the community and family commitments, His Holiness advised that Lajna Imaillah office bearers should discuss the matter with their spouses to carefully strive for a convenient schedule.

His Holiness said that on occasions where women office bearers are busy in their work for Lajna Imaillah, their husbands should not make an issue of this.

However, His Holiness said this must not lead to the Lajna Imaillah office bearers becoming complacent in their responsibilities towards their children.

“Never forget that as mothers, your primary duty is to personally ensure the moral training of your children and to raise them according to the teachings of Islam. Thus, as much as possible, you should be at home when your children come back from school.”

“It should not be that outside of your home, you are involved in Lajna work and are amongst those who are considered an example for others, yet within the confines of your own four walls you are failing in your duties of doing the moral and spiritual training of your own children.”

Drawing the attention of the attendees towards the importance of developing their spirituality and righteousness, His Holiness said that seeking knowledge by reading the Holy Quran is extremely important to achieve this.

“All office bearers must regularly recite the Holy Quran and seek its knowledge and understanding. You should see what the Quran advocates and what it prohibits and only then will you be in a position to set an example for others to follow. Only then will your words have weight and influence on others.”

Recounting the vision of the Second Caliph of the Ahmadiyya Muslim Community, Hazrat Mirza Bashir-ur-din Mahmood Ahmad, who founded the auxiliary organisation of Lajna Imaillah, His Holiness said that Lajna events should be platforms for

“You should hold regular religious discussions, seminars and talks that are conducted in a way that is interesting to people of all ages and backgrounds.  Furthermore, every office bearer should manifest the highest standards of love for Allah the Almighty, the Holy Prophet (peace be upon him) and the Promised Messiah (peace be upon him).”

Concluding his address, His Holiness prayed:

“May Allah grant all of you the ability to fulfil your responsibilities in the very best way. May Allah continue to shower His blessings upon Lajna Imaillah. Ameen.”

The refresher course included numerous workshops, talks and presentations to discuss and share good practices of the various departments of Lajna Imaillah.

The secretaries of Nasirat-ul-Ahmadiyya, the children’s wing of Lajna Imaillah were also asked to vote on one of 5 charities that would be supported by Nasirat-ul-Ahmadiyya across the UK. The charity “War Child” was selected as their national charity for the year.