His Holiness announces that over 112,000 People have joined the Community the past Year

“Know that this Community is a plant established by God, He will never let it perish, nor will He be content until He has caused it to reach ultimate success.” – Hazrat Mirza Masroor Ahmad

Due to the ongoing COVID-19 pandemic, Ahmadi Muslims around the world have been unable to hold their respective Annual Conventions (Jalsa Salana) this year. However, on 7th and 9th August 2020, during the dates that the international Jalsa Salana was due to be held in the United Kingdom, the World Head of the Ahmadiyya Muslim Community, the Fifth Khalifa, His Holiness Hazrat Mirza Masroor Ahmad delivered an inspirational two-part address in which he recounted the blessings and continued progress of the Ahmadiyya Muslim Community during the past year. 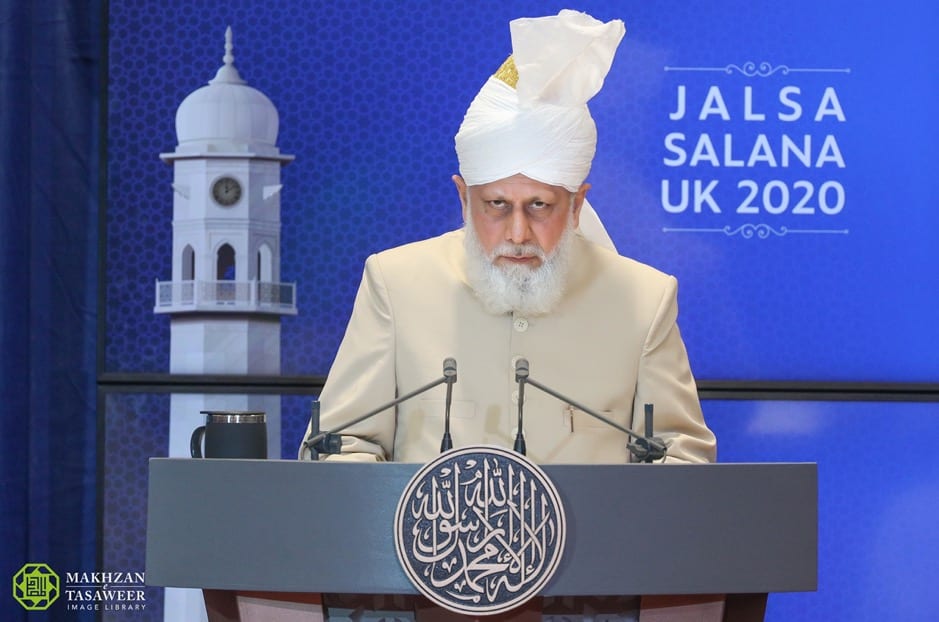 On Friday 7 August 2020, His Holiness delivered the first part of the report during his weekly Friday Sermon from the Mubarak Mosque in Islamabad, Tilford.

The second part was delivered as a special Jalsa Salana address from the Masroor Hall at the Islamabad complex. Both addresses were delivered in front of a small gathering of Ahmadi Muslims in line with social distancing requirements.

Additionally, during the three days when the Jalsa Salana UK 2020 was due to be held, MTA International broadcast a series of Jalsa Salana speeches delivered by His Holiness in prior years, as well as some special live new programmes.

Whilst presenting the Annual Report of the worldwide Ahmadiyya Muslim Community, His Holiness announced that, despite the great and unexpected challenges posed in spreading the message of Islam by COVID-19, a total of 112,179 people had joined the Ahmadiyya Muslim Community during the past year. His Holiness also presented faith-inspiring accounts of people who had joined having witnessed signs of God Almighty testifying to the truth of the Promised Messiah (peace be upon him).

Narrating the story of how one lady came to join the Ahmadiyya Muslim Community in Argentina, Hazrat Mirza Masroor Ahmad said:

“An Argentine lady passed by our mission house in Argentina, where she saw a picture of the Promised Messiah (peace be upon him) with a quote next to it stating that ‘The Messiah has come’. This image and quote had a deep impact on her because she was a practicing Catholic. Before this she had no interest in Islam and nor did she personally know any Muslims.” 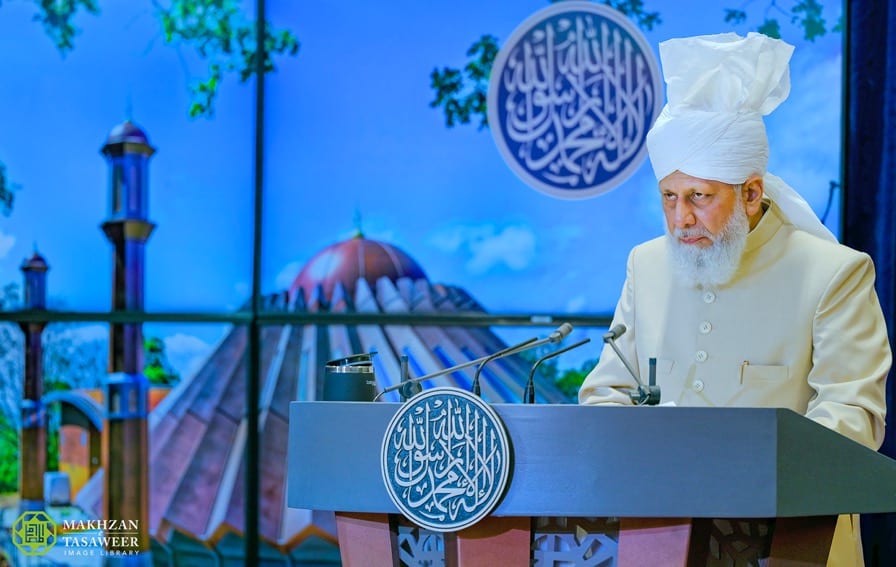 “She began learning about Islam and contacted the local Missionary of the Ahmadiyya Muslim Community. Subsequently, she began to attend the classes and meetings organised by our Community. Her husband found out about this and did not approve, yet despite this, she secretly kept in touch and carried on her study of Islam. Then, a year later, on the 28th December 2019, her heart was satisfied and she decided to join the Ahmadiyya Muslim Community.” 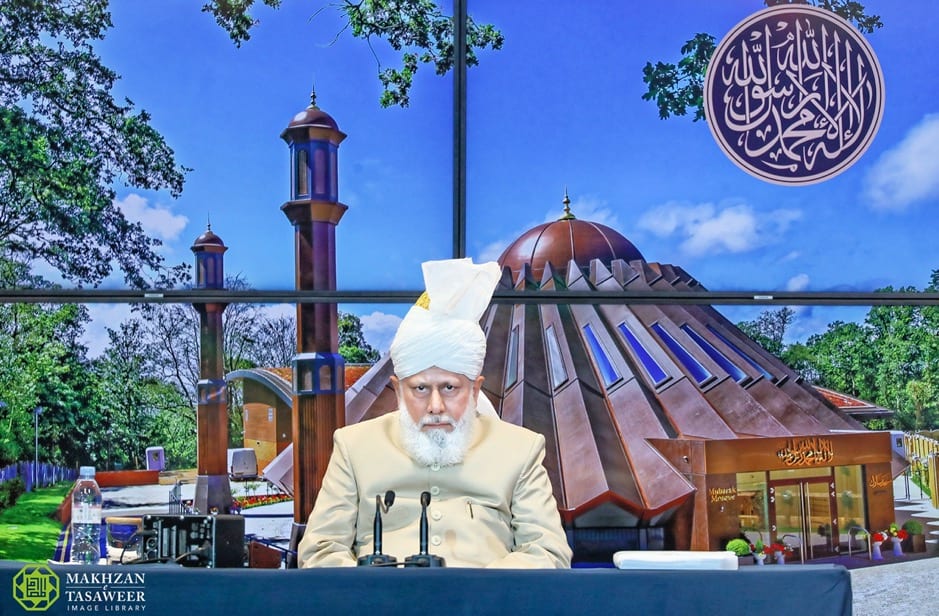 In his address, Hazrat Mirza Masroor Ahmad also spoke about the work of the Foreign Missions of the Ahmadiyya Muslim Community, as well as the output of its official websites such as Alislam.org and periodicals such as Al Fazl, Al Hakam, Al Taqwa, The Review of Religions amongst others.

“The Promised Messiah (peace be upon him) himself established The Review of Religions, and its first edition was published in January 1902. By the Grace of God this magazine has been running for 118 years. It is being printed in English, French, Spanish and German accompanied by a website and social media channels for each language. The Review of Religions has played a very important part in conveying the message of the Promised Messiah (peace be upon him) to the English speaking community.”

His Holiness also spoke about the humanitarian work being carried out across the globe by Humanity First and the International Association of Ahmadi Architects and Engineers (IAAAE). He said that, during the past year, the IAAAE had installed 2,800 water pumps providing benefit to 250,000 people. The IAAAE had also now established 19 model village projects in nine countries and was working on various other humanitarian projects.

Speaking of Humanity First, His Holiness said that the charity was now registered in 54 countries and amongst its humanitarian efforts, it had arranged for 15,315 free eye operations. Furthermore, 345 medical camps had helped over 230,000 vulnerable and under-privileged people.

His Holiness also spoke about the Ahmadiyya Muslim Community’s global television station, Muslim Television Ahmadiyya (MTA) and how it had continued to develop and expand its reach.

He stated that MTA had increased its number of channels from five to eight in the past year and was now regularly translating its broadcasts into ten languages and furthering its efforts to propagate the true and peaceful teachings of Islam online and through social media.

His Holiness concluded by reflecting on the progress of the Ahmadiyya Muslim Community and how it continues to be supported by God Almighty despite the false allegations that are often levelled against its Founder.

“Today, even after 130 years, we are seeing that those signs of support of God Almighty for the Community of the Promised Messiah (peace be upon him) continue to be manifested.” 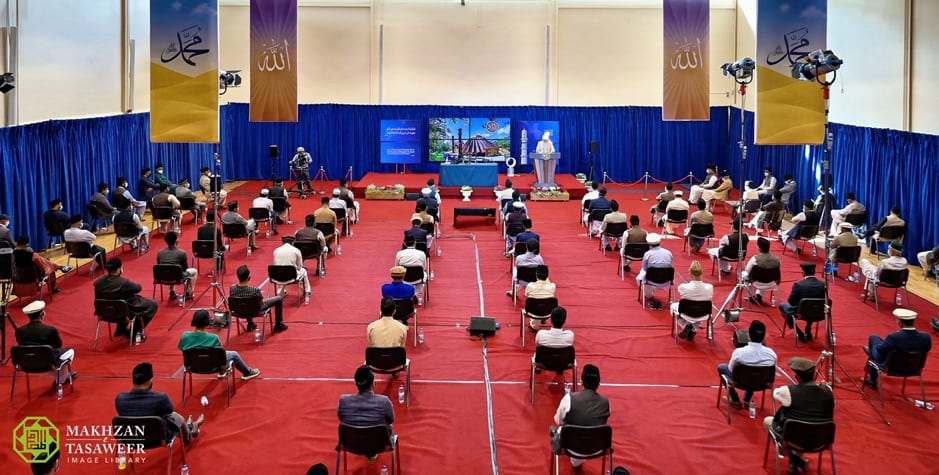 Ending with a quote of the Promised Messiah (peace be upon him), Hazrat Mirza Masroor Ahmad said:

“God Himself manifests the honour of those who are sent by God and enlightens their truthfulness. Those who are not from God and forge a lie against Him are eventually disgraced and destroyed.” 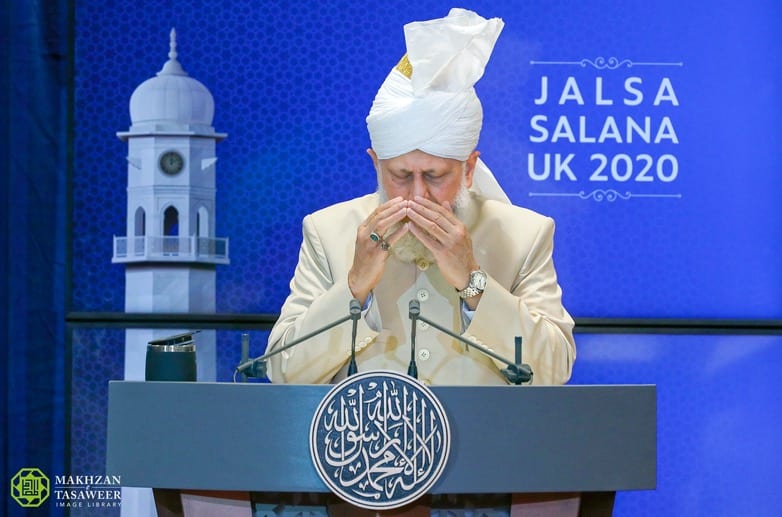 His Holiness concluded the special address at Jalsa Salana 2020 with a silent prayer. 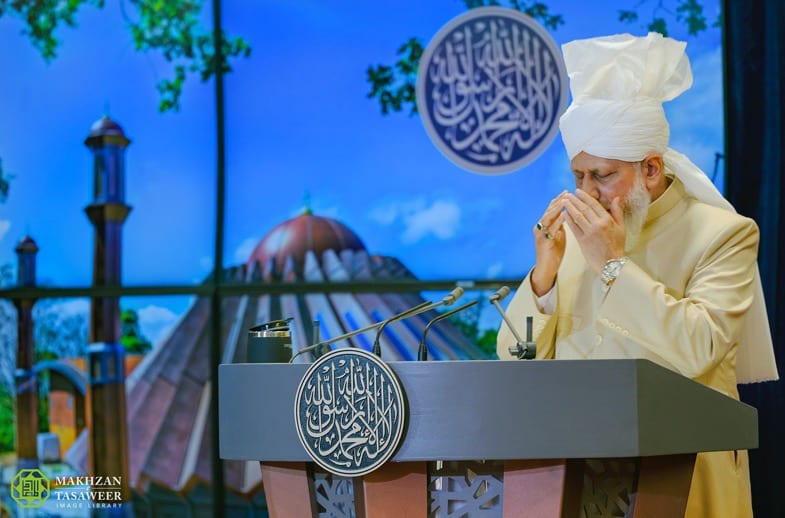