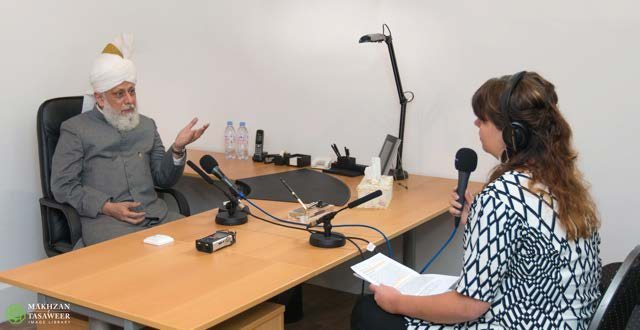 On 5 October 2015, the World Head of the Ahmadiyya Muslim Community, the Fifth Khalifa (Caliph) was interviewed by RTV Nunspeet at the Baitun Noor Mosque complex in Nunspeet, Holland. The  radio interview was broadcast live and streamed worldwide.

Speaking about the purpose of his visit to Holland, Hazrat Mirza Masroor Ahmad said he had been invited to address Holland’s Parliamentary Foreign Affairs Committee and he would also be laying the foundation stone for a new Mosque in the city of Almere.

His Holiness added that he would be meeting members of the Ahmadiyya Muslim Community throughout his stay in Holland.

Upon being asked about the responsibilities of the Khalifa (Caliph), Hazrat Mirza Masroor Ahmad said:

“The responsibility of a Khalifa is to continue the work and mission of a Prophet of God. It is his duty to spread the true message of Islam and to guide those who accept it towards goodness and righteousness. Thus, as Khalifa, I guide Ahmadi Muslims in all parts of the world and meet with members of the community on a daily basis. The bond between the Khalifa and an Ahmadi Muslim is a two-way love.”

“My message to the Parliamentarians will be that Islam is not a religion of extremism and that a violent Jihad is not permissible. I will tell them that all people should join hands and work together to establish love and peace in society.”

Upon being asked his views on the current migrant crisis that is affecting Europe, Hazrat Mirza Masroor Ahmad said: