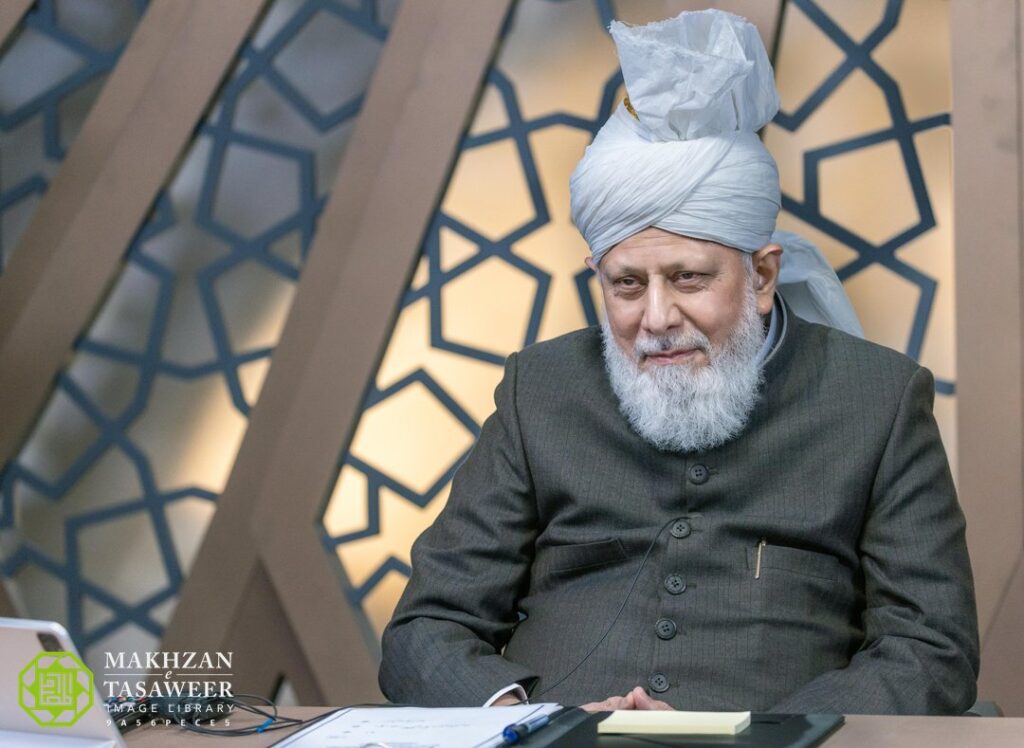 On 15 January 2022, the World Head of the Ahmadiyya Muslim Community, the Fifth Khalifa (Caliph), His Holiness, Hazrat Mirza Masroor Ahmad held a virtual online meeting with Waqf-e-Nau doctors and dentists from Germany.

His Holiness presided the meeting from the MTA International Studio in Islamabad, Tilford, whilst 17 male and 6 female doctors and final year students joined the meeting virtually from the Baitus Sabuh complex in Frankfurt, which serves as the National Headquarters of the Ahmadiyya Muslim Community in Germany. 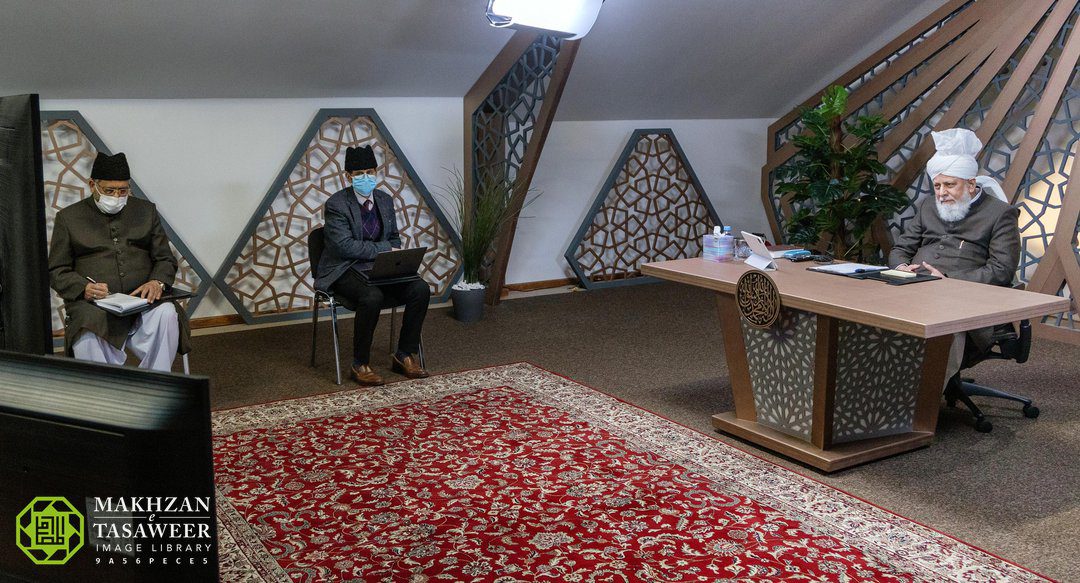 After a recitation of the Holy Quran, all Waqf-e-Nau doctors and students had the opportunity to speak to His Holiness and seek his guidance on their careers and ask questions.

One of the doctors asked His Holiness’ advice on how they can play a part in improving the medical services available to people in Africa.

“This is the role you must play. Collect money and use it to help the poor. There should be doctors who voluntarily go abroad and sacrifice their time as part of Waqf-e-Ardhi and treat people.”

His Holiness said that the Ahmadi Muslim Doctors Association should assess the situation in different African countries and make plans so they can help as many people as possible.

The head of the Ahmadi Muslim Doctors Association asked His Holiness about how they could further educate Ahmadi Muslims in Germany on medical matters. 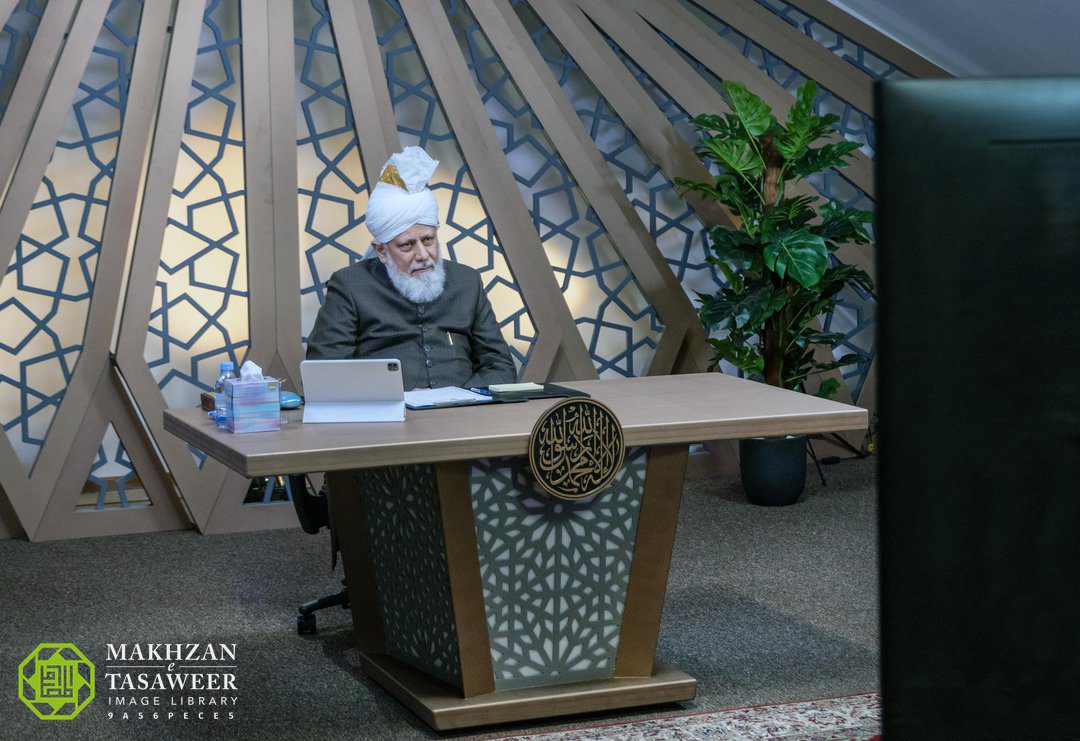 “Many people continue to think Covid is not significant and they do not wear masks, they do not get the vaccine and do not show much care in this regard. If they are not to get the vaccine, at least they should take other measures such as wearing a mask and applying vicks to their noses – which I have seen seems to work effectively. They can also take homeopathic medicine, if they believe in it. But what more can be done or said to those who say that nothing will happen to them and they do not take any safety measures? In terms of those who are less educated or who are careless in this regard, you should make a concerted campaign to create awareness.”

Another attendee mentioned that some people consider mental health issues to be a result of weakness of faith.

Explaining that such a mind-set is wrong, Hazrat Mirza Masroor Ahmad said:

“This is a very incorrect way of looking at it. Whoever says this is wrong… it does not have anything to do with a lack of faith… Mental health illnesses have varying causes and conditions. Sometimes, even if a person himself is not weak in his faith, he is mistreated in such a way by the people around him that he becomes mentally unwell. It is beyond his control. So a patient is helpless. Therefore, to say that such a person is weak in his faith is wrong.”

“One of my children was born there and the other was only eight or ten months old when we went there. So they grew up there. Therefore, there was no question of ‘adjusting’ there. Whatever food was available, we got them used to that. The tough life we have had there, we got our children used to it and that is how they grew older. So it all depends on your mind-set. There are many facilities that are now available in Africa. In our time the circumstances were totally different. These days [in Africa] you can find many amenities which you find here or you can order them from here. So it is not a big problem.” 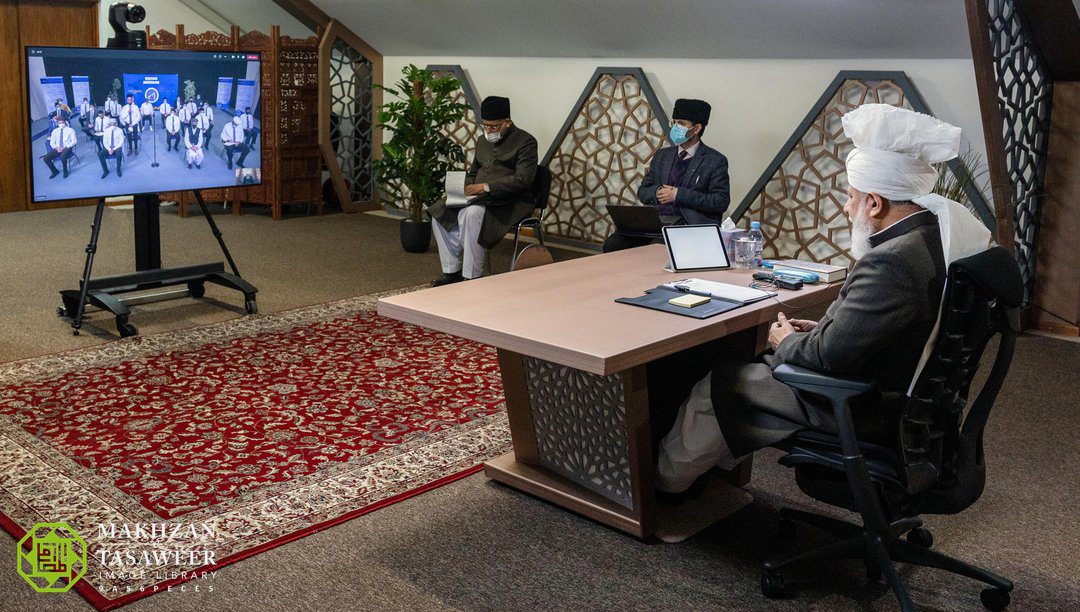 A Lajna member who was the wife of a missionary enquired of His Holiness about the responsibilities of a wife of a life devotee.

“The wife of a life devotee is also a life devotee. If her husband is a missionary, she should help him. She should try to improve her spirituality, morality and also her religious education so that she can carry out the moral and spiritual training of women. Just as it is the responsibility of a missionary to improve himself, so too is it a responsibility of his wife that she should try to improve herself. If her husband is a doctor, then it is necessary for the doctor that his wife makes sacrifices too. If the doctor spends extra time in the hospital or the clinic of the Ahmadiyya Muslim Community, then his wife should be supportive. She should not rebuke him for spending extra time in the hospital. So there should be patience. If she has children, she should focus more on their upbringing and make them realise that they are Ahmadi Muslim children and they are the children of life devotees and so they should be brought up accordingly.”

“You should analyse your moral and spiritual states. At home you can improve your religious and spiritual knowledge. Other than that you should socialise with the local people. For instance, if you go to Africa then socialise with the people there. Bring the people closer to you, spend time with them and socialise with them. They should be made to feel that they are also human beings and that you treat them like other human beings. Treat them as your equals and it should not be that they feel that ‘non-Africans have come and they are treating them in a different way’. So these are the qualities that the wife of a life devotee should adopt; she should become a part of the people and she should assist her husband. She should carry out a good upbringing of their children and should also become a role model for others to follow.”