“No one has the right to force another person to accept Islam. Whoever’s heart is to be inclined towards Islam will then be turned towards Islam by Allah the Almighty Himself.” – Hazrat Mirza Masroor Ahmad

On 18 December 2021, the World Head of the Ahmadiyya Muslim Community, the Fifth Khalifa (Caliph), His Holiness, Hazrat Mirza Masroor Ahmad held a virtual online meeting with members of the Waqf-e-Nau Scheme aged 10 and above from Finland.

His Holiness presided the meeting from the MTA International Studio in Islamabad, Tilford, whilst the Waqf-e-Nau boys and girls were gathered in the Ahmadiyya Muslim Community Mission House in Helsinki, Finland. 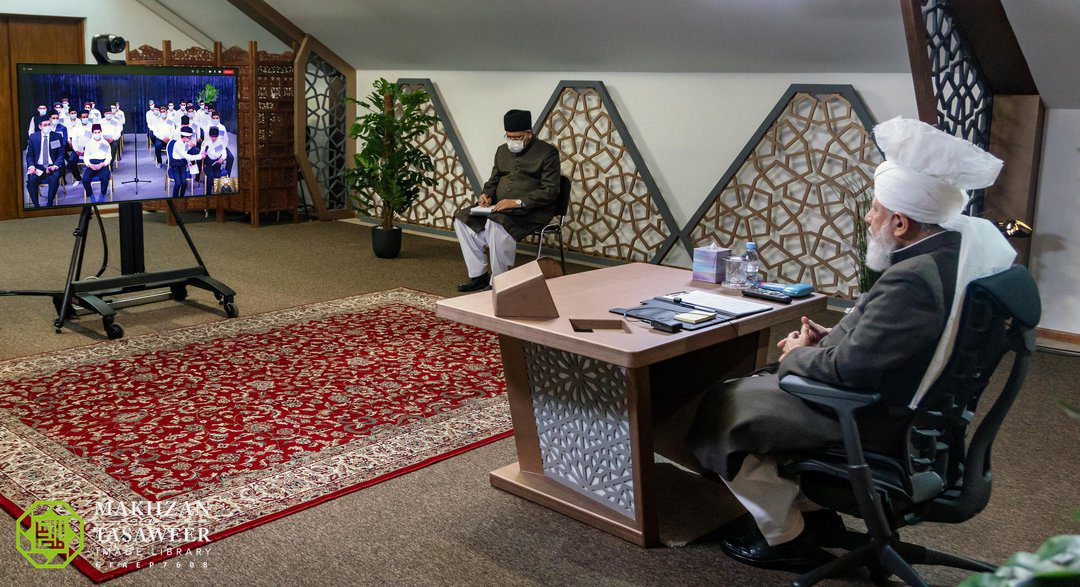 Following a formal session starting with the recitation of the Holy Quran, the attendees had the opportunity to ask His Holiness a series of questions regarding their faith and contemporary issues.

One of the attendees asked His Holiness about how best they should interact with their fellow school students who were not Muslim.

In response, Hazrat Mirza Masroor Ahmad said that they should seek to be their true friends and exhibit their own good moral character. His Holiness said this would break down barriers and up open up avenues to explain the true teachings of Islam.

Whilst interacting with non-Muslims, His Holiness stated that Ahmadi Muslims should never abandon or forsake their own religious teachings and practices.

“If you are visiting your friend’s house and the time for prayer approaches whilst you are with them, then let your friend know that it is your time for prayer and ask if there is a place where you can offer your prayer. Further, you should speak to them kindly and about good things and if anyone else speaks in a rude or wrong way tell them that you do not like such talk and that they should speak about good things and those topics which increase your knowledge.”

“If you treat others with kindness, respect and manifest good morals, they will come closer to you and will also become interested in Islam and will ask questions and talk to you about it. This way it will also open up avenues of Tabligh [outreach]. Even at a young age some children are able to convey Islam’s teachings through their good conduct and speech… Therefore, it is wrong to separate yourselves from other people just because they have a different culture to you. You are living in this country and some of the aspects of the people around you are quite positive. There is no harm in adopting those aspects. However, you must never adopt the negative aspects.”

Another Waqf-e-Nau member asked His Holiness how they can respond to those who say that if Islam is a peaceful religion, then why was there restlessness and disorder in Muslims countries, whilst countries such as Finland were peaceful.

“Theirs is a valid point… And so, tell them that you are speaking to them [about the peaceful message of Islam] so that at least if they have any reservations or doubts about whether Islam is a peaceful religion, those doubts can be removed. Tell them that you are not telling them this so that they become Muslim. To become a Muslim or to change one’s religion is a personal matter for each individual.” “You can certainly tell them that they may think that Islam is an oppressive and extremist religion and that is why you are telling them that this is not the true face of Islam. Let them know that is your only purpose and you have no ulterior motive whereby you will tell them to become Muslim. No one has the right to force another person to accept Islam. Whoever’s heart is to be inclined towards Islam will then be turned towards Islam by Allah the Almighty Himself.”

One of the attendees also asked how they can respond to their friends who argue that they have nothing to gain from believing in God because they already have all the comforts of life.

“You can observe that every religion brought the same teaching; to believe in Allah, show good morals and look after one another. It is true that after the religion’s advent, their adherents corrupted the teachings, however the fundamental teaching was the same. Atheists also affirm that the basic moral teachings were brought to the world by the prophets… Therefore, we should believe in Allah and worship Him and also fulfil one another’s rights.”

Another young woman asked His Holiness if he could narrate any moments from his time in university.

Speaking about his time in university in Pakistan during the year 1974, when Pakistan passed laws declaring Ahmadi Muslims to be non-Muslim and the hardships that were inflicted upon Ahmadi Muslims, Hazrat Mirza Masroor Ahmad said:

“When the 1974 disorder was created against Ahmadi Muslims by extremists, at that time our personal things were burnt. They took our belongings out from our room and set fire to them. They stopped us from coming to university and beat a few Ahmadi Muslim students. We faced such injustices. Otherwise, we as Ahmadi Muslims stayed together and it was a very nice atmosphere. We used to pray together and lived there as friends.”