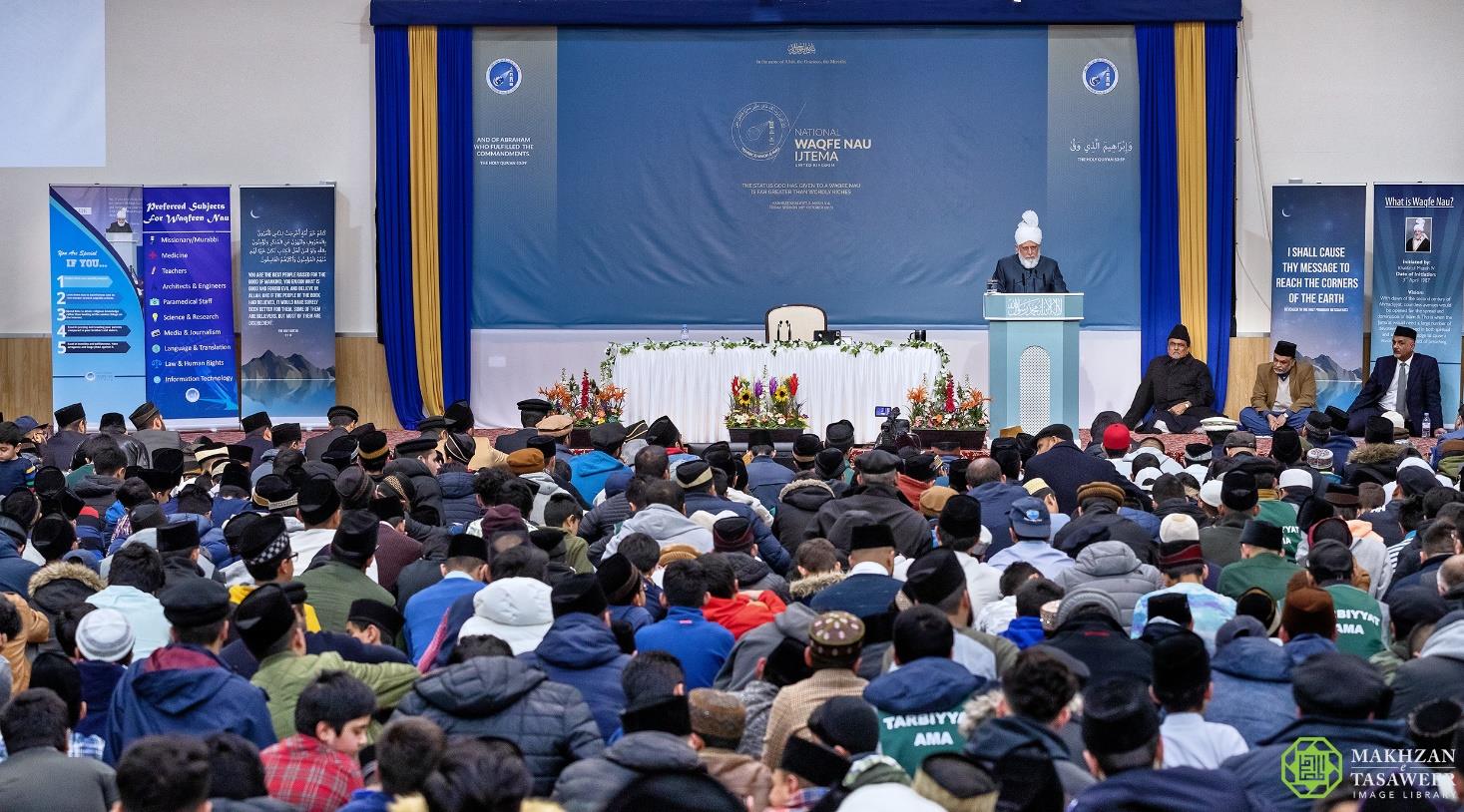 “Irrespective of where you are working or living, you must live your life as a practical manifestation of Islam’s teachings and seek to propagate your religion far and wide” – Hazrat Mirza Masroor Ahmad

The event took place at the Baitul Futuh Mosque in London and was attended by more than 1,700 people, including just under 1,400 members of the Waqf-e-Nau scheme.

During the address, His Holiness reminded members of the Waqf-e-Nau scheme that they must fulfil their sacred pledge to serve Islam in every aspect of their lives. He advised Ahmadi Muslim youth to bring about pious changes in their lives that would enable them to fulfil the rights of Allah the Almighty and His Creation.

His Holiness began his address by explaining that every member of the Waqf-e-Nau scheme should understand that his Waqf (pledge of lifelong service to Islam) is only of real value if he has established a sincere connection with Allah the Almighty through the worship of Allah and the five daily prayers (Salat).

His Holiness expressed his disappointment with those Waqf-e-Nau who claim to have given their lives for the sake of Islam, but are unable to even offer the five daily prayers regularly. 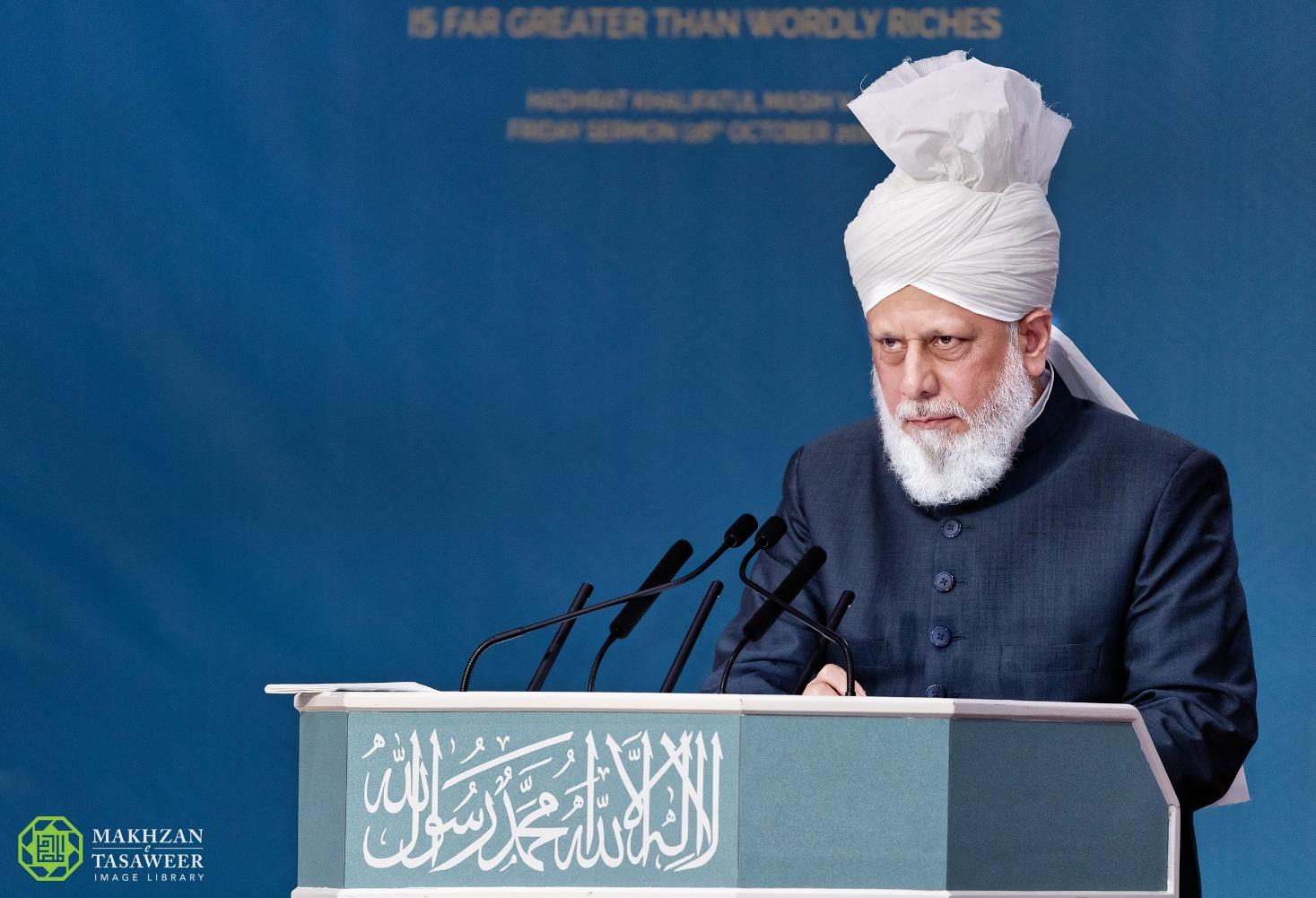 “Never mind offering the five daily prayers in congregation, there are some who, upon being asked, admit that they do not even offer the five daily prayers regularly. What is the purpose and benefit of such a Waqf? On the one hand, they have pledged their lives for the sake of Allah the Almighty. Yet, on the other hand, they remain neglectful of that part of their religion, the worship of Allah, which, after the declaration of faith, is the most fundamental obligation upon any Muslim.”

Hazrat Mirza Masroor Ahmad proceeded to emphasize that it is critical for all members of Waqf-e-Nau to strive to act upon all the commands of Allah the Almighty and to fulfil the rights of one another. He stated that it is not merely enough for Waqf-e-Nau to know their faith, but they must practice it at a much higher standard than others. 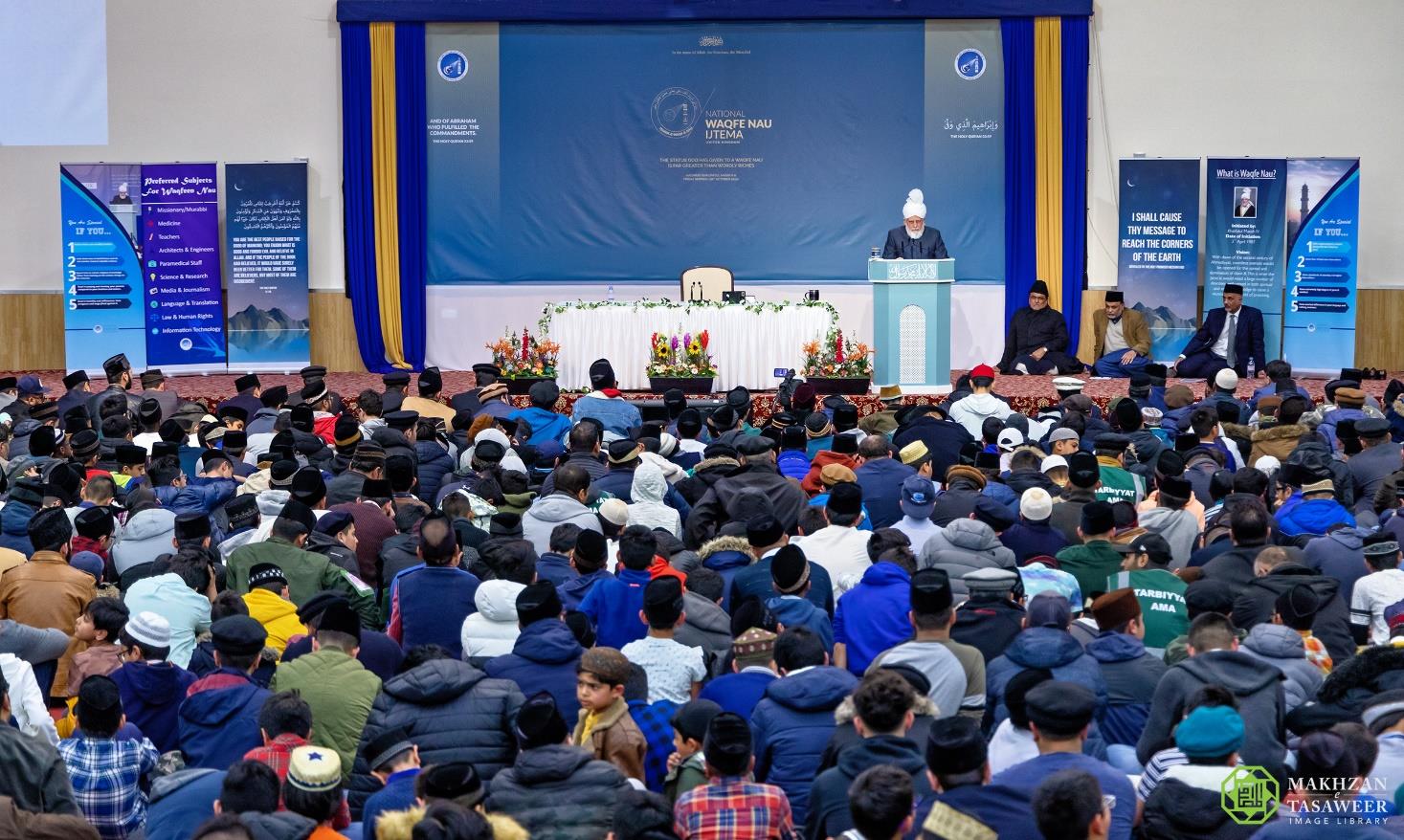 “You should never sit back in contentment merely because your name is included in the list of the Waqf-e-Nau. Rather, you must understand the scale of your responsibilities and your everlasting obligation to your faith. At all times, it is your duty to better your moral standards and to increase your religious knowledge.”

Hazrat Mirza Masroor Ahmad turned the attention of the Waqf-e-Nau to the desires and expectations that the Promised Messiah (peace be upon him) held of those Ahmadi Muslims who pledged their lives for the sake of Islam. 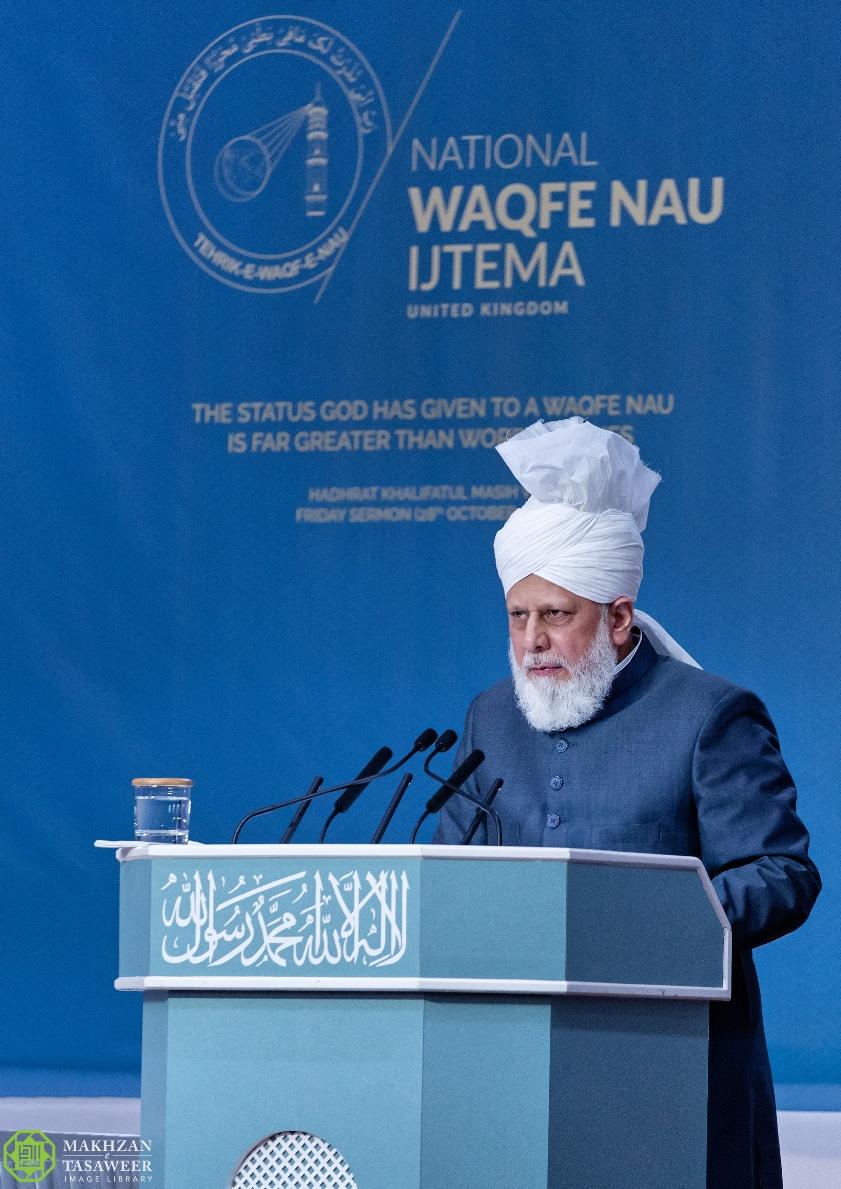 His Holiness detailed how the Promised Messiah (peace be upon him) taught that those who associated themselves with him should devote their lives to their faith in the same way he did.

The Promised Messiah (peace be upon him) taught that Waqf requires one to strive and struggle to reach that point where they can sincerely claim that their life, their death, their sacrifices and their prayers are all for the sake of Allah the Almighty.

“You should understand that even though you are living in a Western society, you must live your lives in an Islamic way seeking to attain the pleasure of Allah the Almighty. You must resolutely keep hold of your religious values and traditions. You must bring about those pious changes in your life that will enable you to fulfil the rights of Allah the Almighty and His Creation. You must always seek to improve and better yourself and to raise your spiritual and moral standards and increase your knowledge.”

Hazrat Mirza Masroor Ahmad directed the Waqf-e-Nau to keep the great personal example of the Promised Messiah (peace be upon him) firmly within sight at all times.

Stating that it was the task of Waqf-e-Nau to follow in the blessed footsteps of the Promised Messiah (peace be upon him), Hazrat Mirza Masroor Ahmad said:

“I have no doubt that if the members of Waqf-e-Nau are able to collectively follow his example even to a very small degree they will be able to bring about a spiritual and moral revolution in the world.”

Hazrat Mirza Masroor Ahmad highlighted Prophet Abraham (peace be upon him) as a role model for the Waqf-e-Nau to emulate.

“This verse means that the Prophet Abraham (peace be upon him) fulfilled the pledge he made to God Almighty with complete obedience and loyalty and, as a result, was the recipient of the love of His Creator. Now it is up to all of you to fulfil the sacred covenant you have made with Allah the Almighty. To do so is not an easy or simple thing.  The pledge of a life devotee and of a Waqf-e-Nau is a vast and everlasting undertaking.  It is to give away your life for the sake of your faith.”

Explaining how Waqf-e-Nau families should endeavour to achieve and act by the true spirit of Waqf, rather than being proud over mere titles, Hazrat Mirza Masroor Ahmad said:

“As I have said many times, just holding the title of Waqf-e-Nau is meaningless.  It becomes meaningful when a member of Waqf-e-Nau understands the demands of their pledge and faithfully strives to fulfil it to the best of their abilities.”

“Therefore, if someone informs me that he, his wife and children are all Waqf-e-Nau they should realise that this alone means nothing until and unless they solemnly strive to reach the high standards of obedience required by the Promised Messiah (peace be upon him).”

Hazrat Mirza Masroor Ahmad listed many attributes that should be displayed in the character of a Waqf-e-Nau including the display of good manners, remaining humble and the showing of care and love to near ones. 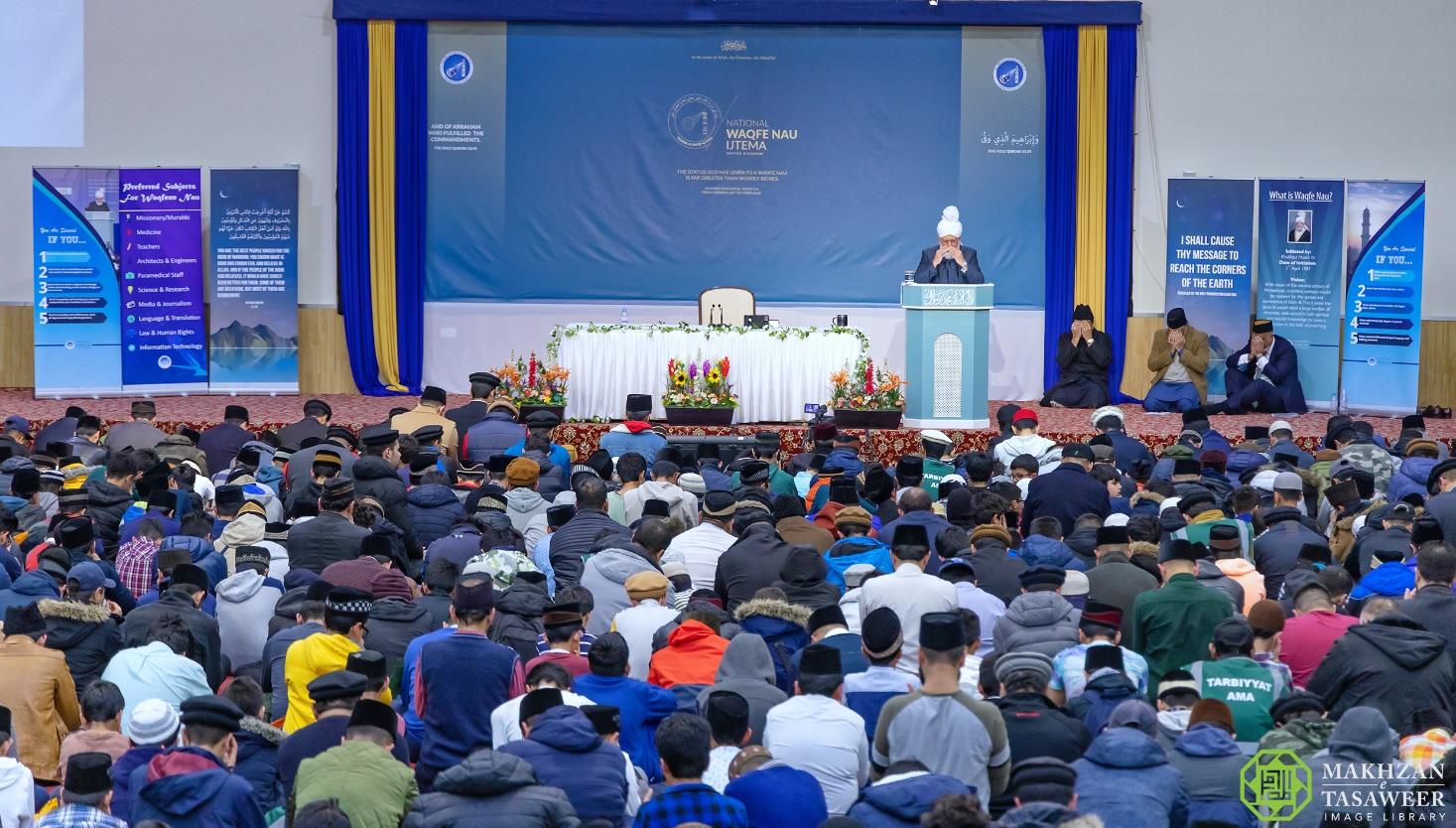 Concluding his address, His Holiness prayed: 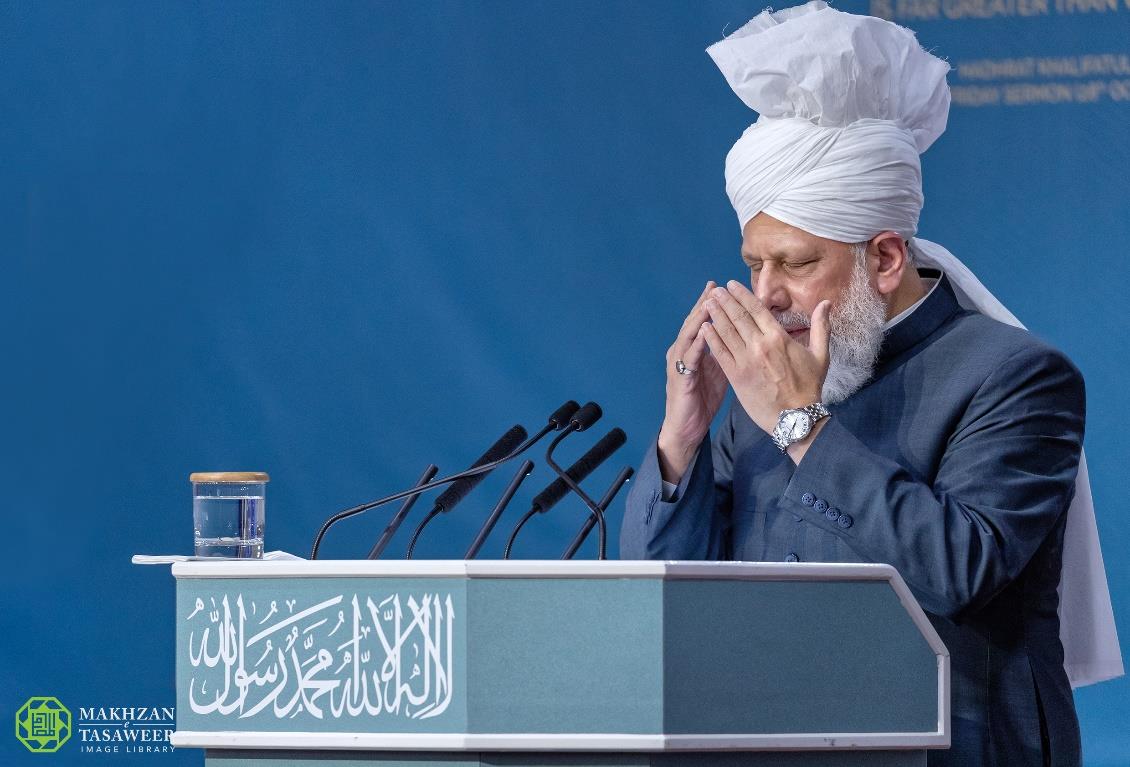 “May He grant you the capability to elevate your moral and spiritual standards and may He enable you to continually increase your service to the Jamaat and to fulfil your pledge with true sincerity. Ameen.”