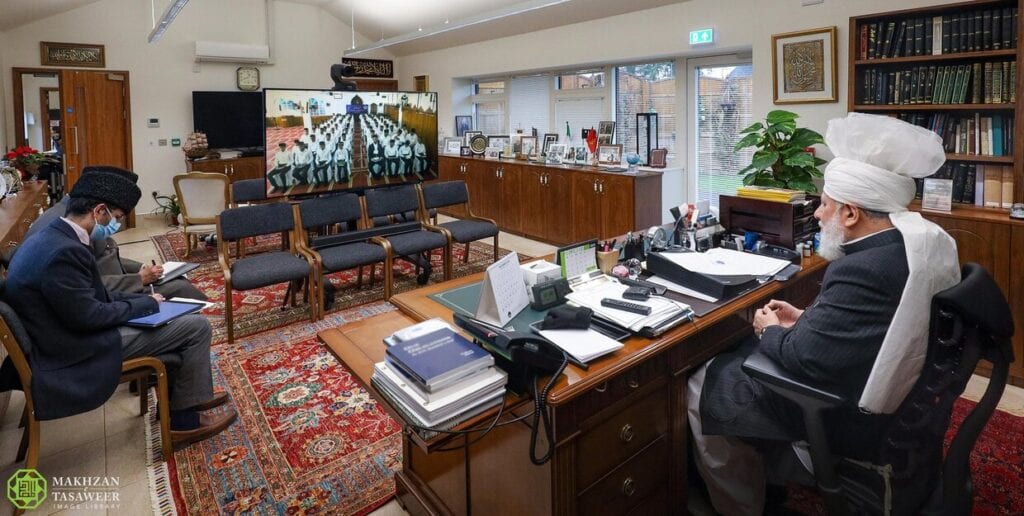 On 13 December 2020, the World Head of the Ahmadiyya Muslim Community, the Fifth Khalifa (Caliph), His Holiness, Hazrat Mirza Masroor Ahmad held a virtual online meeting with male members of the Waqf-e-Nau Scheme from Mauritius.

His Holiness presided the meeting from his office in Islamabad, Tilford, whilst the Waqf-e-Nau members joined from the Darus Salaam Mosque in Rose Hill, which serves as the National Headquarters of the Ahmadiyya Muslim Community in Mauritius.

The event started with the recitation and translation of verses of the Holy Quran, followed by a poem and a brief report outlining the activities of the Waqf-e-Nau in Mauritius. 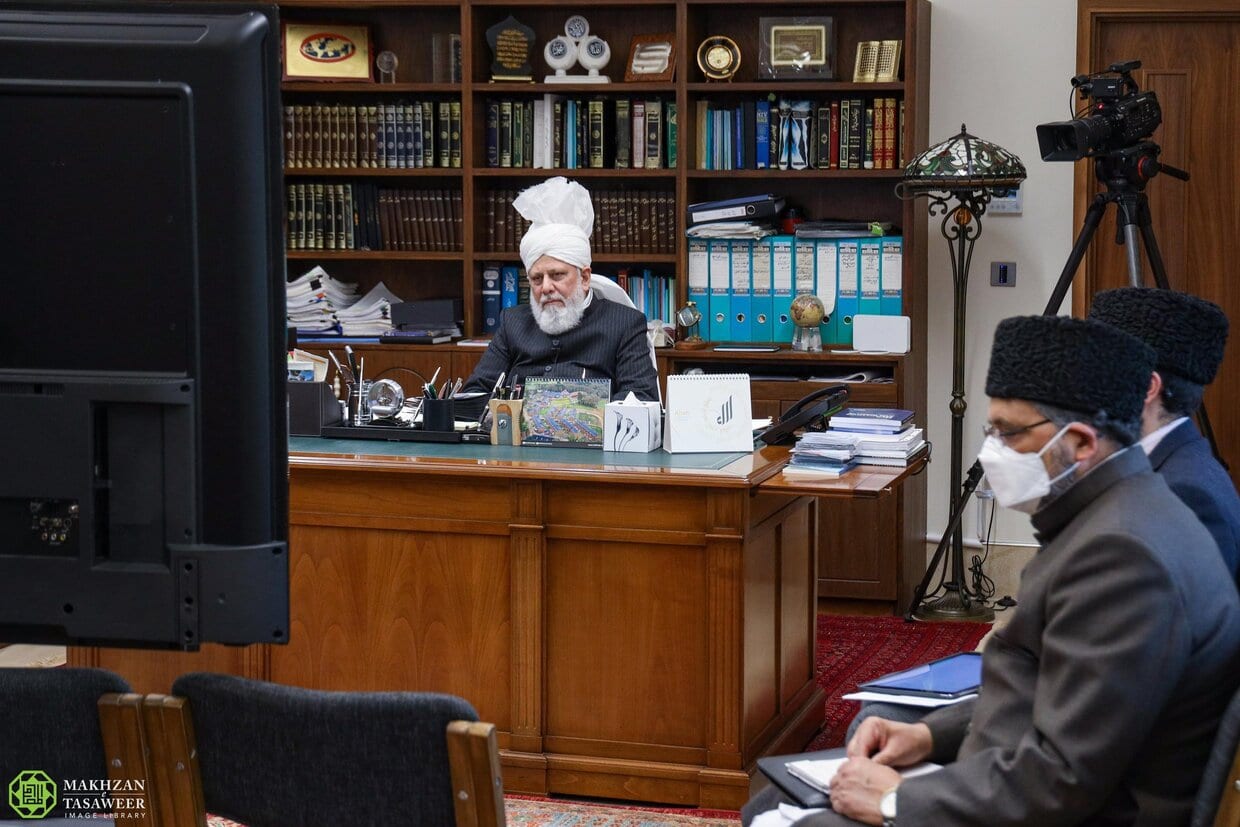 For the rest of the one-hour meeting, members of Waqf-e-Nau had the opportunity to ask His Holiness a series of questions regarding their faith and contemporary issues.

His Holiness was asked how children could avoid becoming addicted to their phones or tablets.

“It is a matter of understanding and priority. Every Ahmadi Muslim should understand that his main obligation is to offer the five daily prayers – not just for the sake of offering the prayer, but to achieve the love of Allah the Almighty. So when you realise that the purpose of your existence is the worship of Allah the Almighty, then you will give preference to that main objective.”

“Parents should also be watchful at all times to see what their children are doing. A child of 10 years of age should not spend more than one hour on a mobile phone or online games. Outside games are much better, as they can help you better your health. So it is the duty of the parents as well that they should watch that their children are not spending too much time on mobile phones and make them realise, with love and kindness, that they have a purpose and they should try to achieve that purpose instead of wasting their time on online games.”

His Holiness was also asked about the problems that an island like Mauritius might face in case of Third World War.

“Whether Mauritius is directly involved in a future world war or not, it does not matter because nowadays the world is like a global village and all the countries are interdependent. So if there is a world war and you have any food item which is being imported then you will suffer to get those food items. If you trade with a country which has been affected by the world war and their economy is crippled, then Mauritius will also face the effects. So people of different nations will suffer whether they are directly involved in the world war or not.”

“This interdependence will mean that every country will suffer because economically the whole world will feel the crisis. For example, the 2008 economic crisis affected Mauritius as well. Although there are a very few cases of coronavirus in Mauritius but still Mauritius is also affected. The economy is not as good as it used to be when the days were normal so the same thing will happen during and after a world war.”

Another young Waqf-e-Nau member asked His Holiness how they should respond if the politicians of a country were corrupt.

“If you feel your leaders and government are not discharging their responsibilities, then you should try to find good people and use your right of vote and bring those people in the government who are not corrupt – those who are honest and sincere to the country.”

“If you know someone personally who is pious and sincere and honest to the country then use your vote for him or for her. But it is very difficult to find from amongst the politicians any person who is true and sincere to the country. The only solution is that you yourself should stand in an election and try to change and better the total political atmosphere of the country.” 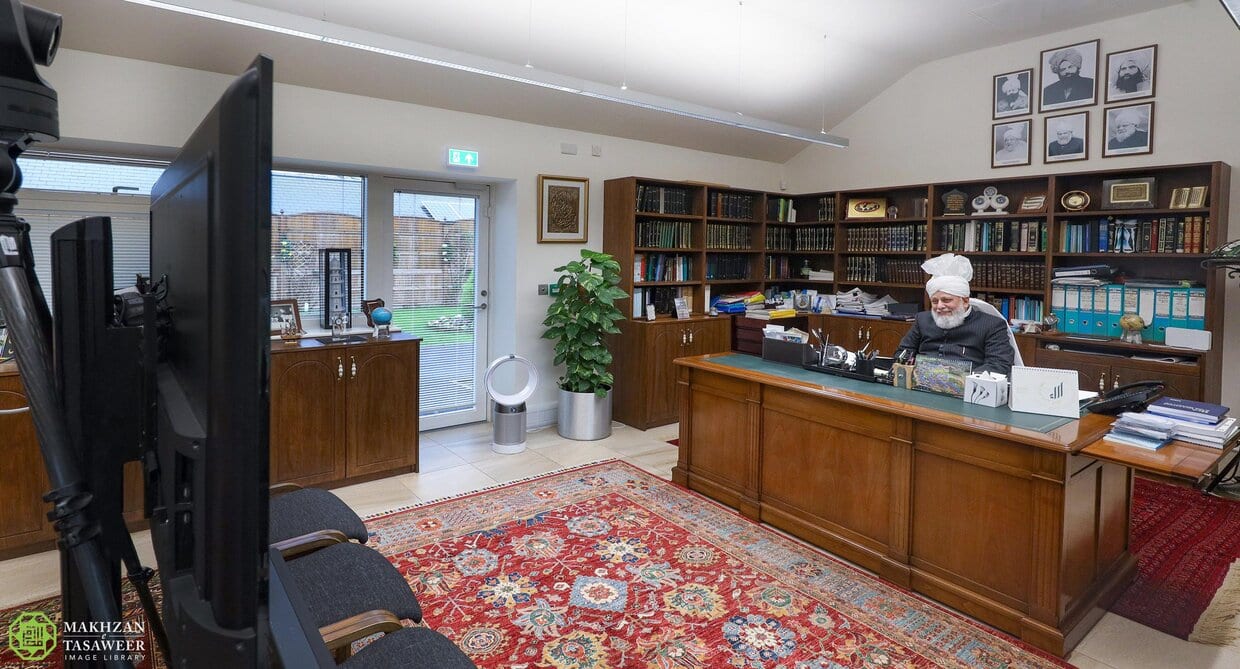 In response to a question of the possibility of extra-terrestrial life, Hazrat Mirza Masroor Ahmad stated:

“Even the Promised Messiah (peace be upon him) has said there are quite a number of other galaxies and it is quite possible that there is life in any of the other galaxies and other planets as well. But we don’t know for now the actual position of them. Some scholars say that from the verses of the Holy Quran we construe that a time will come when there will be a signal from other planets to our earth and then there will be a mutual communication but how it will happen and when it will happen, Allah knows better. But there is life there.”

Another questioner asked if the recent American elections would in any way impact when a Third World War may take place.

“If a world war is in Allah’s plan and it is destined to happen then it will happen. It does not matter whether the American President changes. However, if the politicians are sensible then it can be delayed but ultimately, as the world is forgetting their responsibilities, they are not following the teachings given to them by Allah the Almighty, they are not discharging duties owed to Allah the Almighty and towards fellow beings, then Allah’s wrath and punishment may come in shape of a world war. It does not matter who the American President is – Biden, Trump or whoever.”

His Holiness was also asked about greed and how it can be overcome.

“Today because the vast majority of people are materialistic so they have forgotten their responsibilities towards their Creator. That is why they are greedy. Had they known their duties towards their Creator, they would not have behaved like this. So we as Ahmadi Muslims should take this banner and spread this message to all across the country and the world that we should discharge the duties we owe to Allah the Almighty and to our fellow beings.”

The virtual meeting concluded with a silent prayer led by His Holiness.