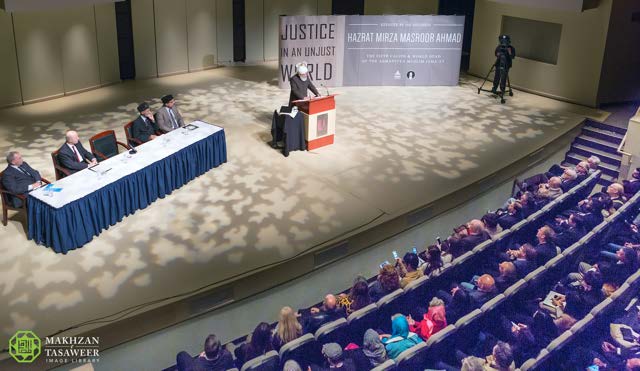 On 28th October 2016, the World Head of the Ahmadiyya Muslim Community, the Fifth Khalifa (Caliph), His Holiness, Hazrat Mirza Masroor Ahmad delivered an historic lecture at York University in Toronto in front of an audience of more than 180 guests, including academics, politicians, media and thought leaders.

“Justice in an Unjust World “

– was organised by the Ahmadiyya Muslim Community Canada in collaboration with York University.

During his address, His Holiness spoke of increasing conflict in the world and the heightened risk of another world war.

His Holiness began his address by stating that whilst human intelligence had been utilised to rapidly progress in technological and scientific advancements, it had also, on occasion, been used as a

‘force for evil and destruction’.

“Technology has been developed that has the capability of wiping nations off the map with the press of a button. I am referring to the development of weapons of mass destruction that are capable of inflicting the most unimaginable horrors and devastation. Such weapons are being produced that have the potential to destroy not only civilisation today but to also leave behind a legacy of misery for generations to come.” 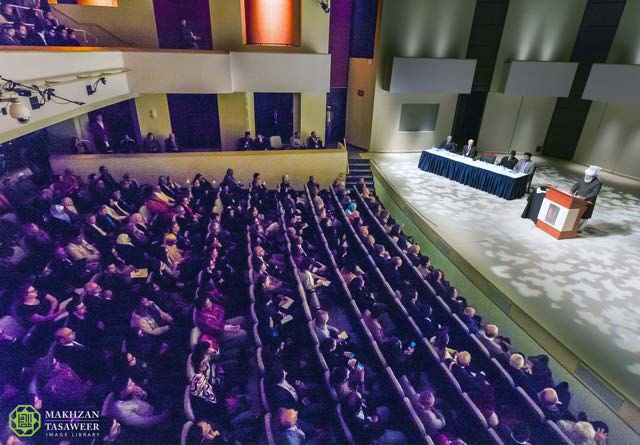 Referring to the current global unrest, His Holiness said that as a Muslim leader, it was a cause of grief to him personally, that today’s world conflicts and terrorism were being associated with Islam.

Thereafter, His Holiness quoted Islam’s primary sources, the Holy Quran and the sayings of the Founder of Islam (peace be upon him) to dispel the myth that Islam was a religion that promoted violence, extremism or terrorism. 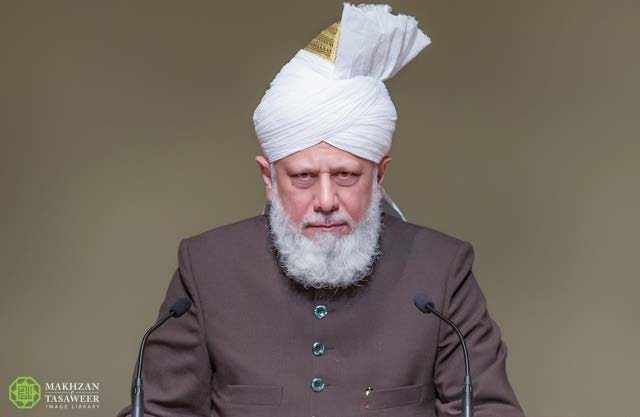 Referring to a famous saying of the Holy Prophet (peace be upon him) that a person should desire for others what he desires for himself, Hazrat Mirza Masroor Ahmad said:

“In terms of verbal proclamations, it is very easy to say that “Yes we do desire the best for others”, however in practice it is much more difficult and challenging. Wherever there is a conflict of interests, most people tend to prioritise their own interests and welfare over and beyond the rights of others.”

‘make over the trusts to those entitled to them’. 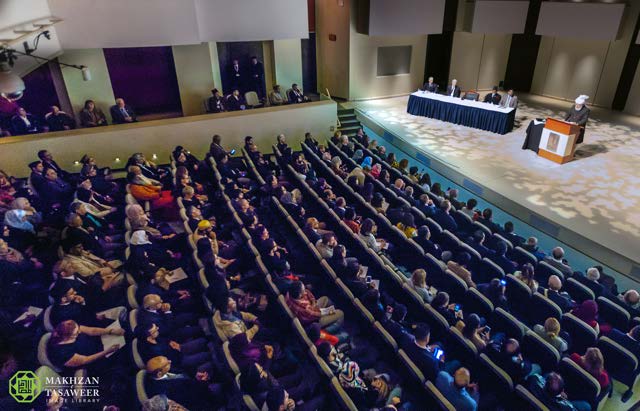 His Holiness emphasised the duty of citizens to participate in the democratic process elections as an example of the trusts placed on the people.

“When it comes to elections or nominations, a person should not vote automatically for his ally or party member, rather they should consider who is the most qualified and suitable for the task at hand. Thereafter, those who are elected and handed the keys to government or power should exercise their duties with honesty, integrity and justice. This teaching is the model of democracy that Islam champions.”

“This should be the guiding principle when voting for individuals or for particular policies, rather than merely following party lines or personal relationships.” 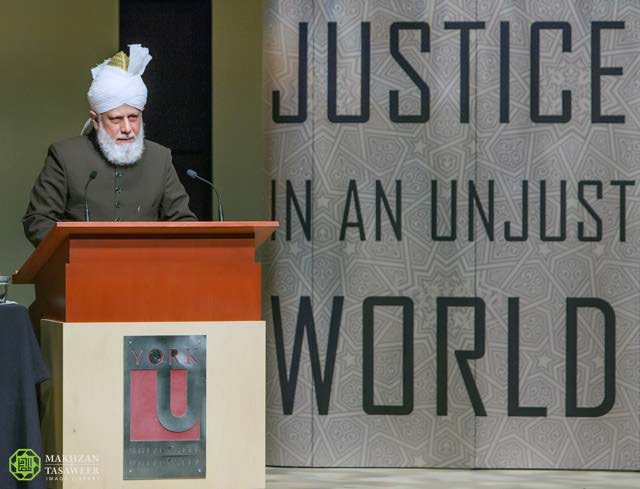 His Holiness said that at an international level, weaker nations often relied on powerful nations so it was incumbent upon the latter to fulfil the trusts placed in them.

“At the United Nations it should not be that certain countries wield undue power and influence, or that the permanent members of the Security Council care only for their own interests and utilise their veto power even where it is in conflict with the interests of the majority. Rather, all members of the United Nations should work together and fulfil the covenant of trust upon which the institution was founded – to maintain the peace and security of the world.”

His Holiness said he believed that self-interest had become the

of the powerful members of the United Nations. He said that the ability of the permanent members of the Security Council to utilise a veto power was implicitly unfair.

Hazrat Mirza Masroor Ahmad also said that there had been various foreign policy mistakes in recent years and that the 2003 Iraq War was a “prime example”, wherein many of those who initially supported the war now accepted it was a grave mistake.

“There is no doubt that such injustices have shattered the foundations of world peace and have enabled terrorist groups such as Daesh to take root and grow. These groups are now not just a threat to the Muslim world but to all humanity.”

His Holiness said that it did not seem that the world’s major powers had learnt from past errors and cited the arms trade as an example of how financial incentives were being prioritised over and beyond morality and justice.

“A number of Western countries are continuing to sell weapons to Saudi Arabia that are being used to target the people of Yemen. No Muslim country has large-scale weapons factories that can produce such huge quantities of deadly weapons and so their only source is the Western world.”

“Even Western writers and commentators have spoken of the hypocrisy and immorality of the international arms trade, yet when questioned about such sales, governments either ignore the question or seek to justify what is patently unjustifiable. All they care about is that their cheques clear so that billions are added to their own national budgets.” 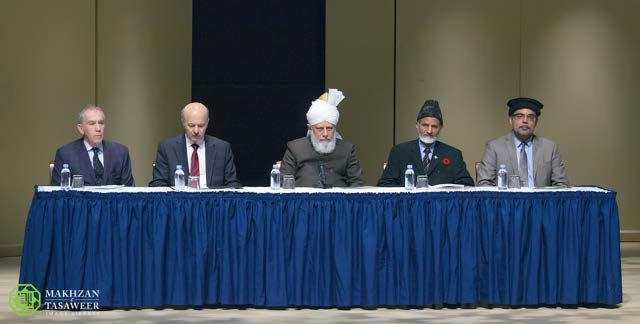 “In short, money talks and morality is left nowhere to be seen. How on earth can peace be achieved in such an environment?”

Referring to Islamic standards of justice, His Holiness quoted chapter 4, verse 136 of the Holy Quran, which requires that Muslims should be willing to give testimony against themselves and their loved ones in order to uphold truth and justice.

The Head of the Ahmadiyya Muslim Community also referenced chapter 5, verse 9 of the Holy Quran which states,

‘and let not a people’s enmity incite you to act otherwise than with justice. Be always just, that is nearer to righteousness.’

“This is the exalted standard of justice advocated by Islam and so if today’s Muslim governments are not following this teaching it is their fault. Hence, it would be entirely unjust and wrong to blame Islam for their misdeeds.”

“If we truly want peace in our time then we must act with justice. We must value equality and fairness. As the Prophet of Islam (peace be upon him) so beautifully stated, we must love for others, what we love for ourselves. We must pursue the rights of others with the same zeal and determination that we pursue our own rights. We should broaden our horizons and look at what is right for the world, rather than what is only right for us. These are the means for peace in our age.”

Prior to the keynote address, both Mr. Sorbara and Mr. Moridi took to the stage and welcomed His Holiness to York University, whilst Mr. Lal Khan Malik, the National President of the Ahmadiyya Muslim Community in Canada, also gave a welcome address.

“The Ahmadiyya Muslim Community Canada is growing as fast and as dynamically as any organisation in the country with a mission that needs to be heard around the world, and that is the mission of peace and love for all and hatred for none.”

Both prior to and following the event, His Holiness met personally with Mr Sorbara and Mr Moridi.