More than 3,100 people from across the UK and abroad attend event

The 3-day event, which was attended by more than 3,100 people from across the United Kingdom and abroad, was held at the Baitul Futuh Mosque complex in south-west London.

During his address, Hazrat Mirza Masroor Ahmad referred to the fact that Majlis Ansarullah was celebrating its 75th anniversary in 2015. His Holiness said that the anniversary would only be worthy of celebration if it led to a moral and spiritual improvement amongst the members of the auxiliary organisation.

“Celebrating the 75th anniversary of Majlis Ansarullah will only prove beneficial if it is a means of increasing your bond with God Almighty and motivates you towards self-analysis and spiritual reformation. If however, the anniversary only entails superficial celebrations or temporary improvements then there will be no benefit.”

“In the overall scheme of things 75 years is not of itself a huge period of time or especially significant. There are a number of organisations that are just as old or even older. However, we see that, over time, such groups deviate from their original objectives and consequently their benefit to the world declines. A prime example of this is the United Nations, which is celebrating its 70th anniversary, yet many commentators and observers openly contend that the UN has failed to deliver its key objectives.”

“The very meaning of Ansarullah is ‘Helpers of Allah’ and so it is the duty of Majlis Ansarullah to spread the true and peaceful teachings of Islam to all parts of the world. It is your duty to teach the Holy Quran with its true meaning and to act as a positive moral example for all others to follow and learn from. It is your duty to guide the world towards peace and prosperity. And so all members of Majlis Ansarullah must ask themselves to what extent they are each playing their respective roles in this effort.” 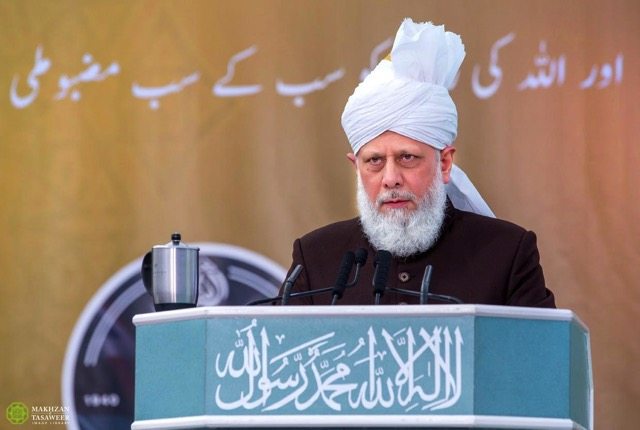 Speaking of the early period of Christianity, His Holiness said that the early Christians were those who abided by the true teachings of their faith and sought to fulfil the rights of God Almighty.

However, despite great material progress and affluence, the Church today was a weakened institution in terms of spirituality and had deviated from its original teachings. In contrast, the Ahmadiyya Muslim Community would always abide by the true and peaceful teachings of Islam. 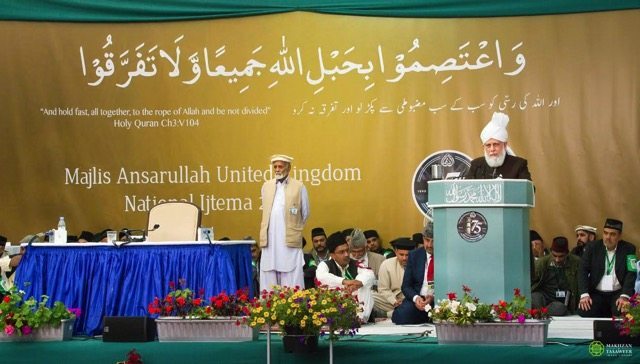 “In this era, Allah the Almighty sent the Promised Messiah (peace be upon him) to guide the world and so the Ahmadiyya Muslim Community can only be successful if it stays true to his teachings. Let it be clear that our ambitions and goals are not kingdoms or material power, rather we are those who give precedence to our faith over all worldly matters.”

“Today, as it celebrates its 75th anniversary, if Majlis Ansarullah desires true blessings and success, then its members must ensure that they follow the true teachings of the Promised Messiah (peace be upon him). They must always seek to increase in righteousness and to instil goodness and morality into their future generations.”

The Ijtema concluded with a silent prayer led by Hazrat Mirza Masroor Ahmad.

Earlier, a report was presented by Chaudhry Wasim Ahmad, the National President of Majlis Ansarullah UK during which he spoke of the various activities of the 3-day event. He informed that speeches were given by scholars about Islam’s true teachings and various academic and sporting competitions also took place.

He also announced that this year’s Ijtema had taken on an international dimension, with the participation of representatives from 15 different countries attending.

This year the 34th National Ijtema of Majlis Ansarullah United States, coincided with the UK National Ijtema and so also concluded with the address given by Hazrat Mirza Masroor Ahmad. 1175 Ahmadi Muslims attended the event, which was held at the Baitur Rehman Mosque in Maryland. 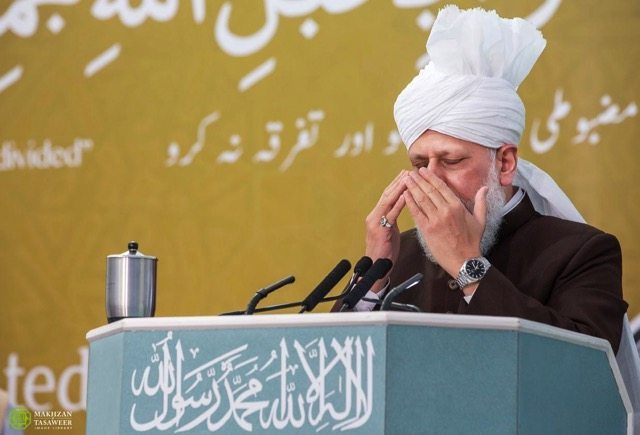