His Holiness presided the meeting from his office in Islamabad, Tilford, whilst over 20 new converts joined from the Aiwan-e-Tahir Hall in Peace Village, Toronto.

During the event, which started with the recitation of the Holy Quran, each new Ahmadi Muslim was able to introduce himself and speak to His Holiness and narrate their personal stories of why they joined the Ahmadiyya Muslim Community.

His Holiness asked some of the converts if they were ready to bear hardships and religious opposition from their families and the wider society. All indicated that they were ready to make whatever personal sacrifices were needed for the sake of their faith and sought the prayers of His Holiness for their continued spiritual progression.

Some of the attendees mentioned that they converted because of the peaceful and noble teachings of the Ahmadiyya Muslim Community.

In response to one such comment, Hazrat Mirza Masroor Ahmad said:

“If ever you see any Ahmadi Muslim acting against these teachings (of Islam), do not think that it is the teaching. Rather, it is his personal (wrong) action. Any bad action of an individual Ahmadi Muslim should not keep you away from Islam and the Ahmadiyya Muslim Community.” 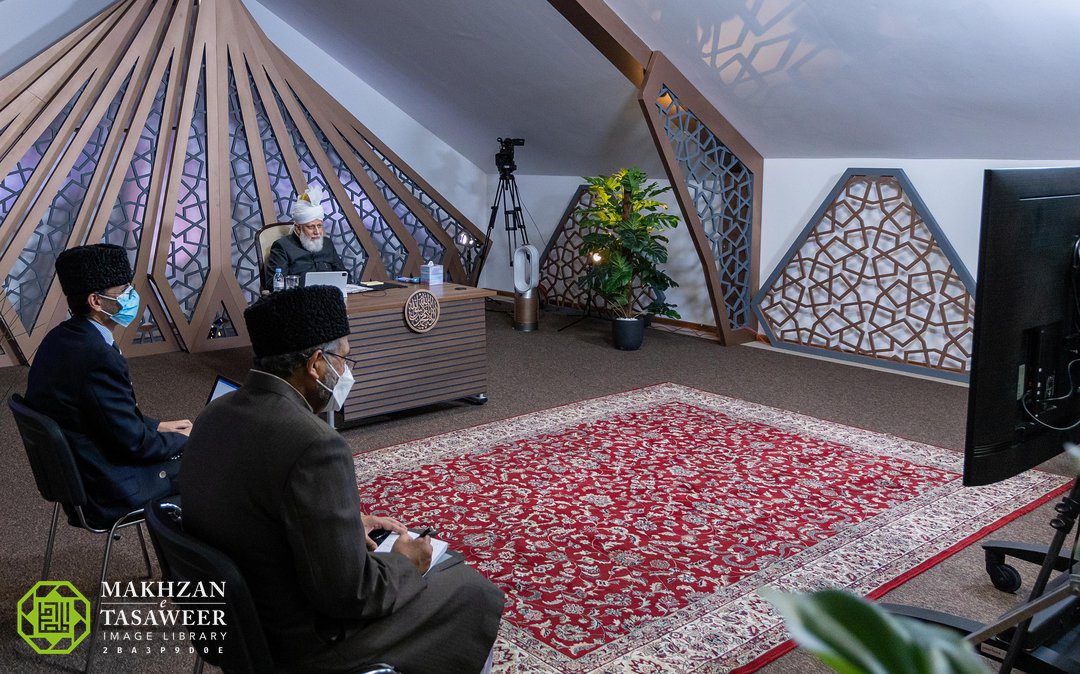 One of the attendees asked His Holiness what the status of Khilafat is within Islam.

“…In Surah Hujurat of the Holy Quran it is written that when two Muslim groups and governments fight each other, then bring about peace between them. At that time, when the Holy Quran was revealed, there was only one Muslim government. There was no question of having two governments, yet it instructs very clearly to bring about peace between the two groups… This meant that the worldly governments were to remain in their place and the guidance was to make peace between them. However, as far as progress is related to religious, intellectual and spiritual development, that was to occur through Khilafat and the Promised Messiah (peace be upon him). So, this proves that in this era, Khilafat was to be limited to the realm of faith and spirituality. Yes, kings and leaders of countries will come to seek guidance from the Khalifa on spiritual matters and it is possible they will seek guidance on other matters too from the Khalifa of the time. However, the worldly or political leadership is not to be with Khilafat now.” 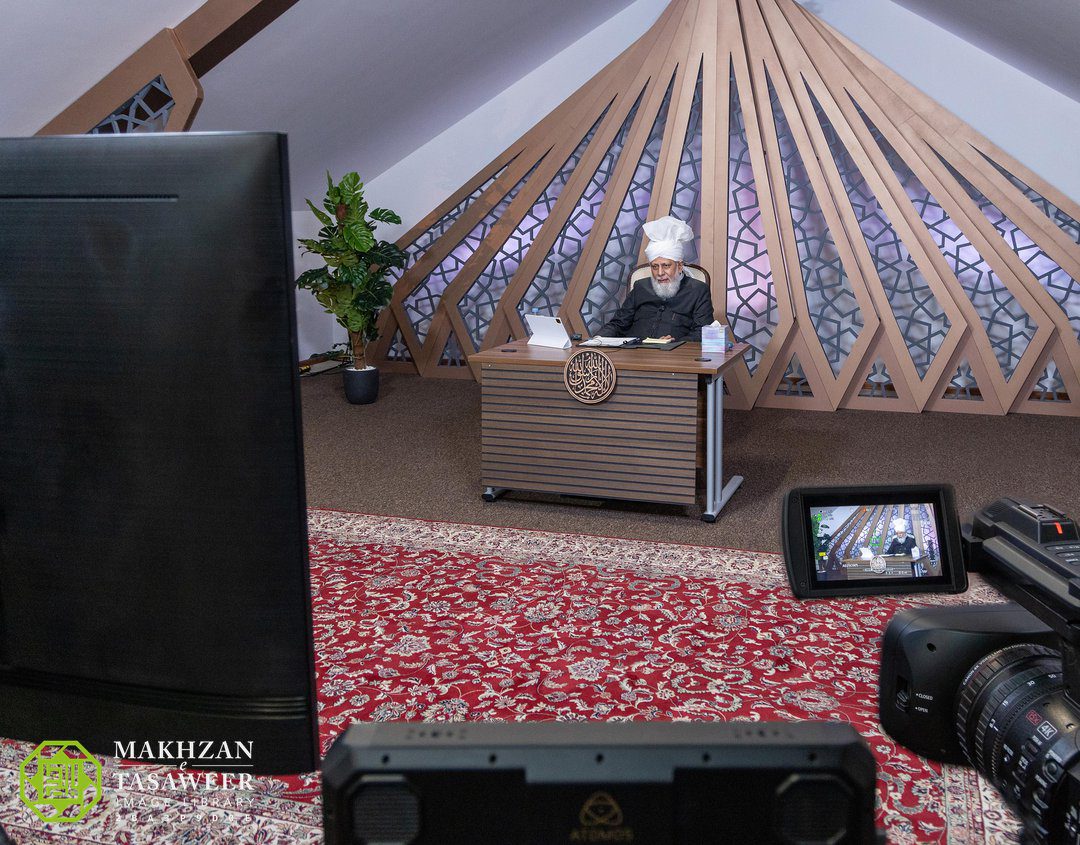 Another question related to what Ahmadi Muslims consider other Muslims and whether or not the current perils the Muslim world is going through can be deemed as a punishment from God.

“Whoever says ‘There is none worthy of worship except Allah and Muhammad is His Messenger’, we consider them to be Muslims. Non-Ahmadi Muslims reject the Imam Mahdi and the Imam of the age and so, in this regard, we say that they are disbelieving in the Promised Messiah (peace be upon him) whose advent was prophesied by the Holy Prophet Muhammad (peace and blessings be upon him) and by the Holy Quran in Surah Jummu’ah and other places. However, in terms of the wider definition of a Muslim, they are Muslim. As they believe in the Holy Prophet (peace and blessings be upon him), we do not consider them as ‘non-Muslims’.”

Regarding the second part of the question, Hazrat Mirza Masroor Ahmad said:

“It was the promise of God that when Muslims fight the disbelievers, He will assist them and they shall be victorious. That was the promise and that is what we saw in the early history of Islam and during the time of the Rightly Guided Caliphs. These days I am delivering Friday sermons about the companions of the Holy Prophet Muhammad (peace and blessings be upon him) and specifically about Hazrat Umar (ra) – during whose time a large number of places were conquered by the Muslims. We can see how the Muslims were up against major powers of the time, but because Muslims were promised victory, God Almighty granted Muslims the victories. So now, if the Muslims are fighting for the sake of Allah then surely they should also see victories! But they are not doing so.”

“Secondly, currently the Muslims are not even fighting non-Muslims. Muslims are fighting other Muslims…It is clearly stated in the Holy Quran that killing one innocent Muslim will take you to hell. A companion of the Holy Prophet (peace and blessings be upon him) killed an opponent during a battle who had recited the Islamic creed out of fear of being killed, yet the Holy Prophet (peace and blessings be upon him) was very upset with the companion for doing so. The companion said that he became Muslim out of fear of the sword, to which the Holy Prophet (peace and blessings be upon him) replied, ‘Did you open up his heart to see if he did so out of fear?’ So, this is the level of strictness that is present within Islam against a Muslim killing another Muslim. So at a time when Muslims are killing other Muslims, what edict do I need to declare when Allah the Almighty’s actions are themselves proving whether this [current weak state of Muslims] is a depiction of God’s displeasure or pleasure.”

His Holiness was also asked about those Muslims who were being persecuted, such as the Rohingya Muslims, upon which His Holiness outlined that this too was a result of the disunity of Muslims, that despite the fact that many Muslim countries possessed wealth and resources, they failed to unite to help persecuted Muslims. His Holiness said such Muslim powers who failed to help the persecuted would be held accountable in the sight of God.