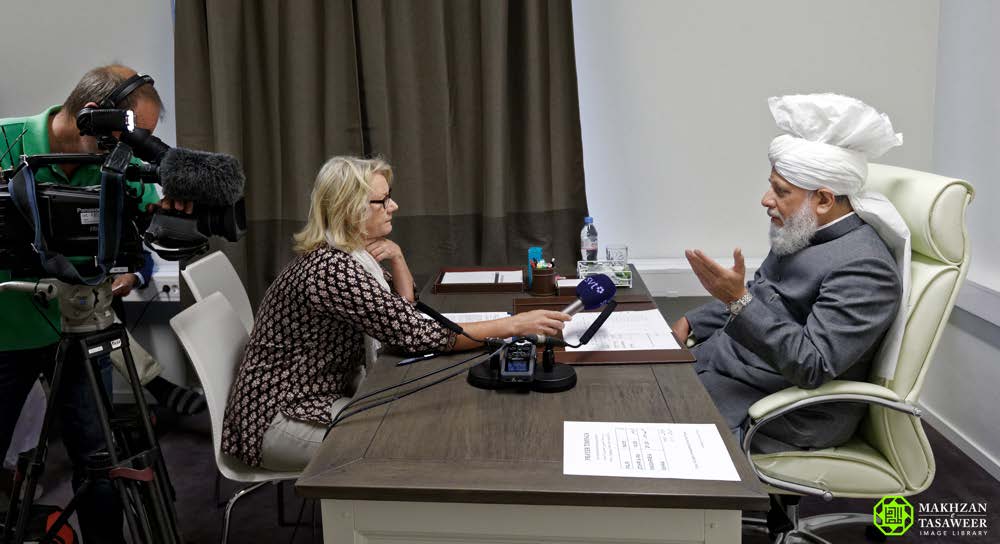 On 11 May 2016, the World Head of the Ahmadiyya Muslim Community, the Fifth Khalifa (Caliph), His Holiness, Hazrat Mirza Masroor Ahmad was interviewed by Sveriges Television (Swedish TV) at the Mahmood Mosque in Malmo, Sweden.

During the interview, His Holiness was asked about the newly built Mahmood Mosque, the integration of immigrants and the rise of terrorism and youth radicalisation.

Upon being asked why the Ahmadiyya Muslim Community had built a Mosque in Malmo, Hazrat Mirza Masroor Ahmad said:

“The Holy Quran says that human beings should worship their Creator and so we have built this Mosque to bring people together to worship Allah the Almighty. Ahmadi Muslims will enter this Mosque five times a day to worship and will offer the weekly Friday prayers here.”

Speaking about the Mosque itself, Hazrat Mirza Masroor Ahmad said:

“This Mosque is extremely beautiful and I hope that the local Swedish people will also consider it to be a positive addition to their environment.”

His Holiness was asked about the Ahmadiyya Muslim Community’s well-known slogan ‘Love for All, Hatred for None’.

“Love for All, Hatred for None is actually the basis of the Quran’s teachings because Islam means peace and love for all of mankind. Thus, we do not consider anyone to be our enemy and nor do we desire harm to any person.”

Regarding the activities of terrorist groups such as Daesh, Hazrat Mirza Masroor Ahmad said:

“Anyone who preaches or propagates any form of extremism acts completely against the true teachings of Islam and is to be condemned. We Ahmadi Muslims, are peace loving and so no Ahmadi Muslim has any desire to join extremist groups. We teach our children from childhood that to be peaceful is an essential part of their faith.”

Regarding the issue of integration of immigrants into Western society, Hazrat Mirza Masroor Ahmad said:

“Due to the threat of Daesh and other terrorist groups, all people are at risk and there is a general threat to peace. However, there are also some who particularly seek to cause harm to Ahmadi Muslims and so we have to remain vigilant.”