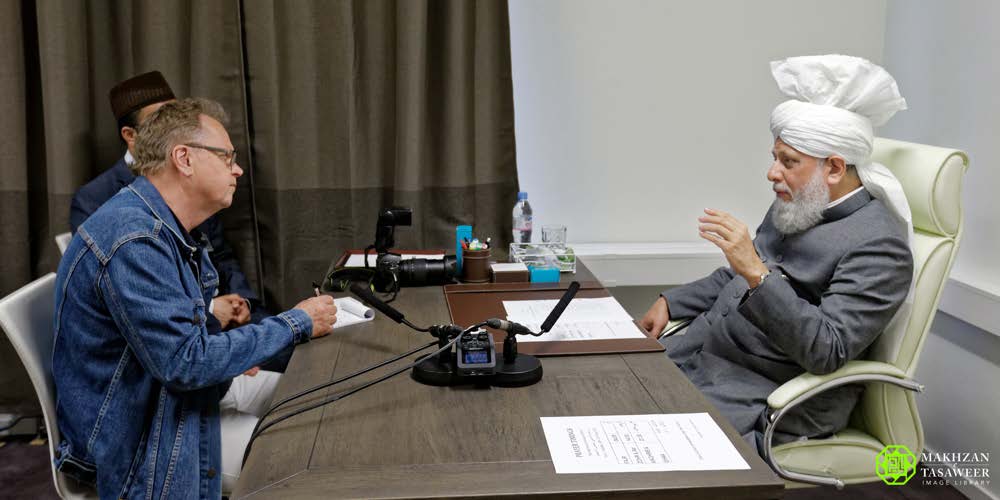 On 11 May 2016, the World Head of the Ahmadiyya Muslim Community, the Fifth Khalifa (Caliph), His Holiness, Hazrat Mirza Masroor Ahmad was interviewed by the Skansa Dagbladet newspaper at the Mahmood Mosque in Malmo, Sweden.

Upon being asked about the rise of terrorism and youth radicalisation, Hazrat Mirza Masroor Ahmad said:

“I have been warning for a long time that Governments should take firm measures to root out terrorism and extremism. The Ahmadiyya Muslim Community considers all forms of extremism to be completely against the teachings of Islam. The truth is that Islam is a religion of love and peace.”

“Of course, everyone has the right to propagate their faith but only through peaceful means. The use of the sword and force cannot be justified in this era and is completely against the teachings of Islam. The Holy Quran clearly states that there should be no compulsion in matters of religion.”

Asked if he could travel to Pakistan, His Holiness said that it would not be possible for him to conduct his duties in Pakistan because Ahmadi Muslims have been declared non-Muslim in Pakistan and are not permitted to practice their faith with any freedom.

“If I visit Pakistan what will I do? Each week Ahmadi Muslims from all around the world listen to my weekly sermon but in Pakistan I would not be permitted to deliver it. In Pakistan, I am not permitted by law to even call myself a Muslim or to lead prayers or to preach our message of Islam.”