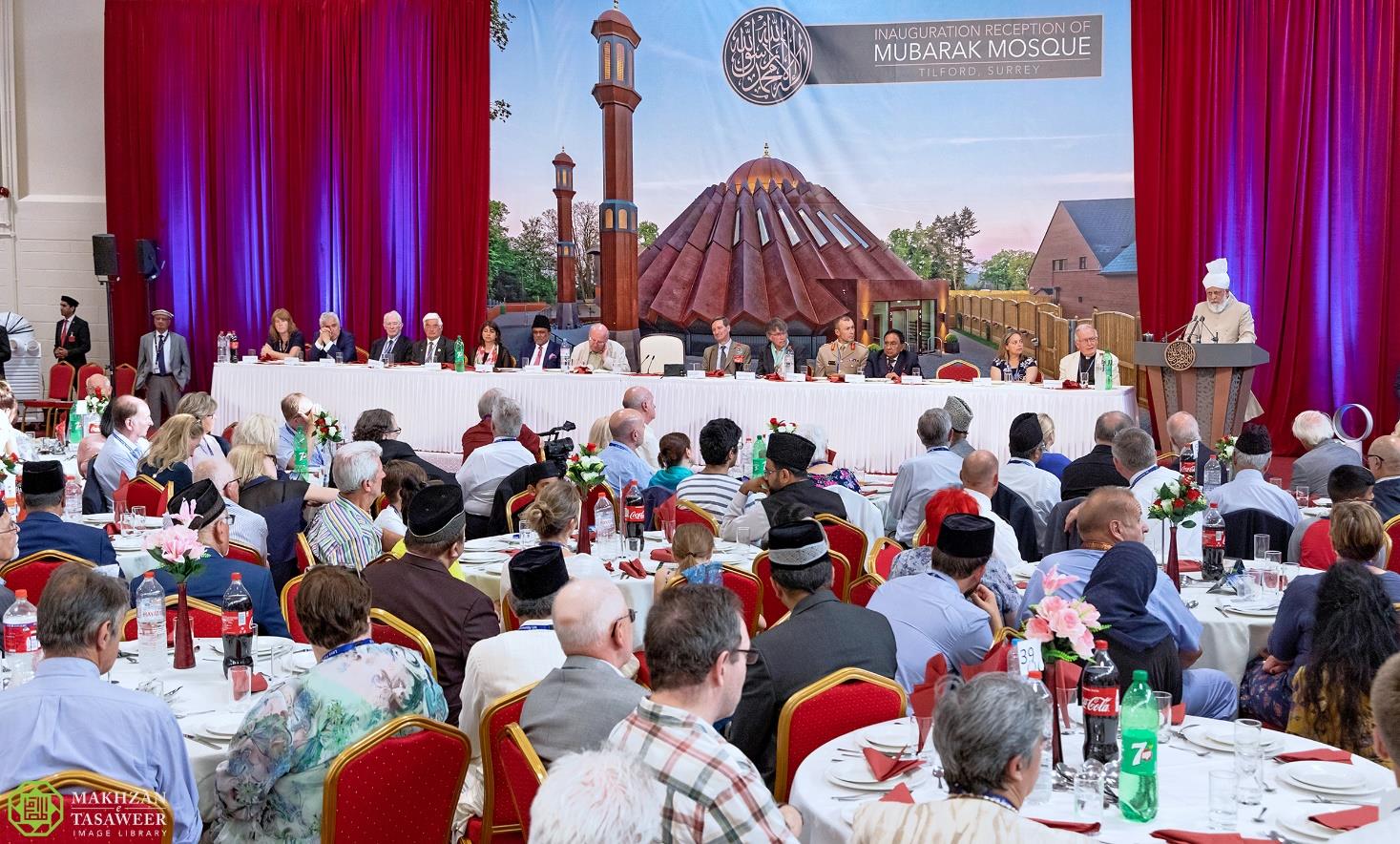 “glorious symbol of peace and service to mankind.” 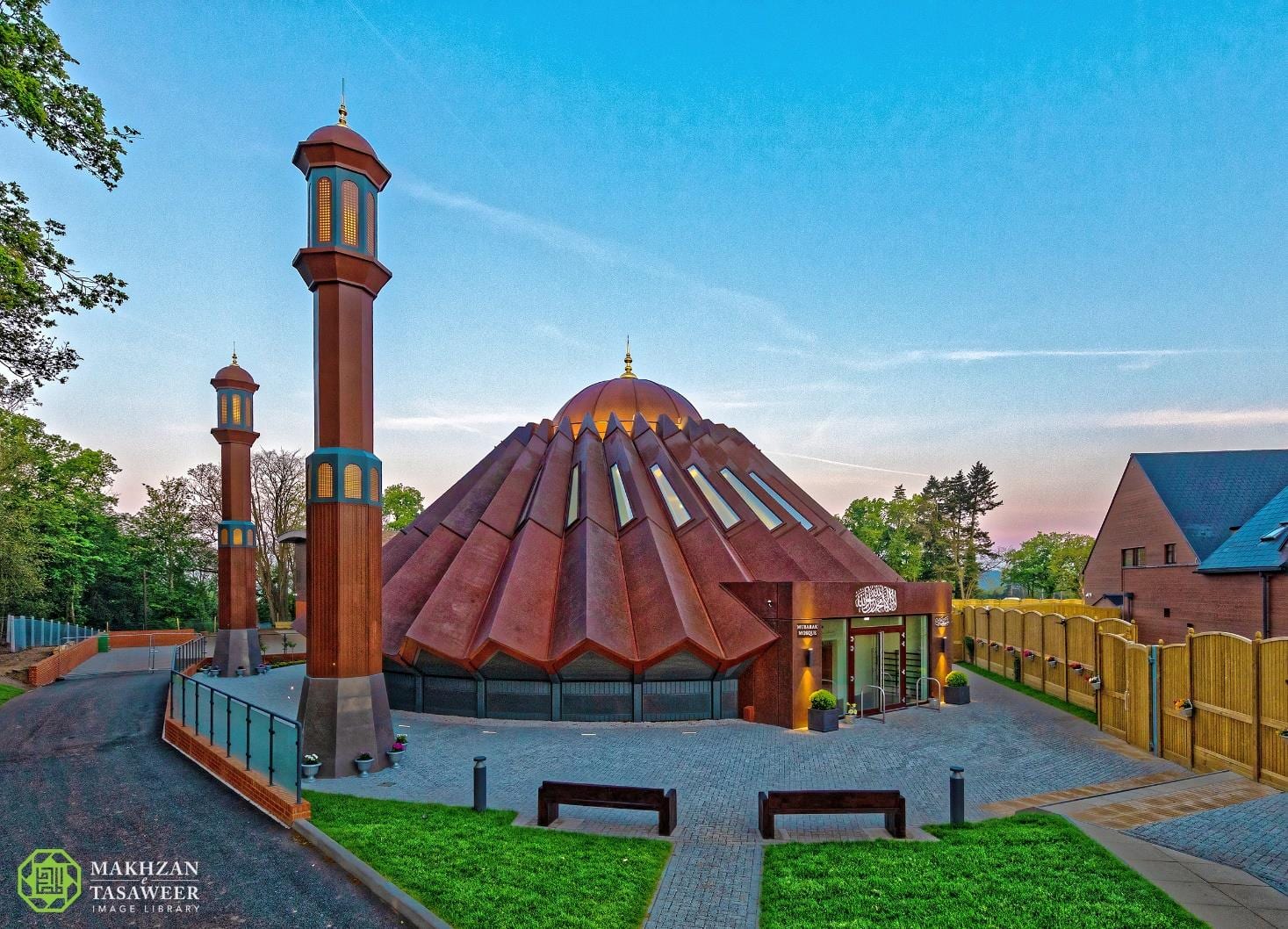 The headquarters, including the beautifully designed Mubarak Mosque (The Blessed Mosque), administrative and residential complex was inaugurated earlier in the year on 17th May 2019.

In his keynote address to a gathering of over 300 guests, including Members of Parliament, Members of the House of Lords, Members of the Armed Forces, various other dignitaries and local residents and neighbours, Hazrat Mirza Masroor Ahmad began by expressing his gratitude and appreciation to the guests in attendance and to the neighbours of the Ahmadiyya Muslim Community’s new headquarters in Islamabad. 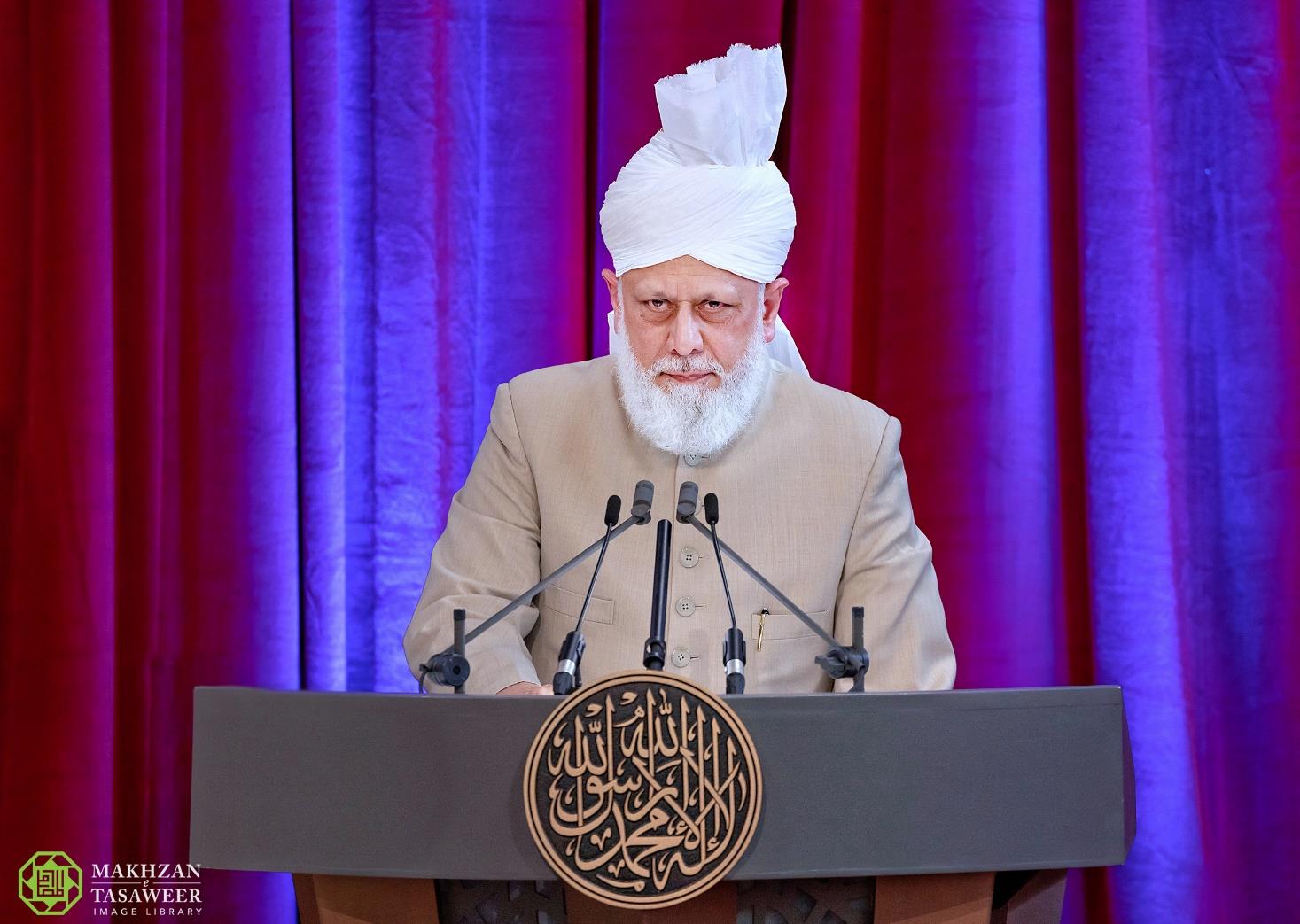 “I wish to offer my heartfelt appreciation and gratitude to our neighbours and to all the local residents in this area, as well as to the local Council members who have shown immense generosity and proved that they are tolerant and open-minded by enabling us to redevelop this complex.”

A key aspect of Hazrat Mirza Masroor Ahmad’s address was to emphasise upon the importance of treating one’s neighbours in the most excellent fashion, as instructed by the Holy Quran.

“Chapter 4, verse 37 of the Holy Quran imposes a code of moral values which true Muslims must adopt and live their lives by and it guides them about how to interact with other members of society. Where on the one hand, the verse states that Muslims must worship Allah the Almighty alone and not associate any partners with Him, it also commands them to show compassion and love to all mankind.”

“The verse then categorically states that Muslims must fulfil the rights of their neighbours, including those with whom they have personal relations and those with whom they do not. Fulfilling the rights of neighbours means that Muslims must treat their neighbours with grace and compassion and be ever ready to help them in their times of need and times of grief. It means to respect them and to hold them in the highest regard.”

Hazrat Mirza Masroor Ahmad further elaborated upon who is meant by a ‘neighbour’ according to Islamic teachings.

“According to Islam, the definition of a neighbour is extremely far-reaching. The Founder of Islam, the Holy Prophet Muhammad (peace and blessings be upon him) stated that a person’s neighbours are not just those who live in the immediate vicinity but include at least the nearest 40 houses. In light of this, we consider all of the people living in this area and even those who may travel on the roads near this site as our neighbours.”

Hazrat Mirza Masroor Ahmad informed the audience that he had instructed Ahmadi Muslims to treat all local residents and neighbours of Islamabad with the utmost courtesy and respect at all times.

“It is incumbent upon all Ahmadi Muslims, whether they live here at Islamabad, whether they live locally or even if they just travel here to attend the prayers, to follow the laws, to be considerate at all times and to fulfil the rights of our wide circle of neighbours and to try to ensure that no distress or disturbance is ever caused to them.”

Leading by example, Hazrat Mirza Masroor Ahmad himself made a beautiful promise to the local residents and neighbours of the Islamabad site.

“I personally pledge that I will uphold and honour your rights and strive to care for all of you and I will continually urge the members of our Community to do the same.”

“Allah the Almighty has commanded Muslims that it is not enough for them to merely worship in the Mosque but they must serve their local communities and constantly strive to help those who are in need. In fact, Allah the Almighty states that the prayers of those who fail in their duties to mankind are worthless and will never be accepted by Him.” 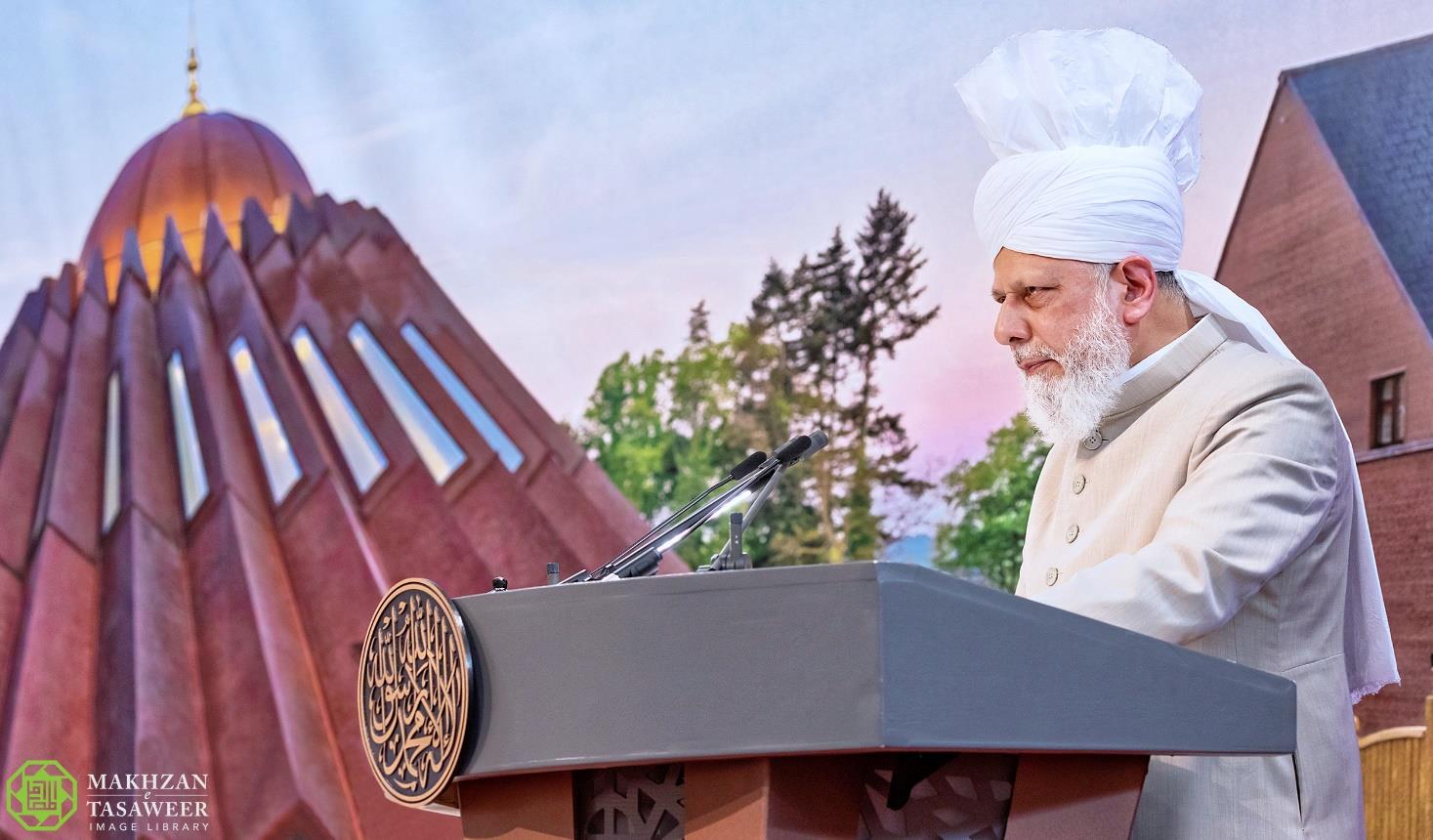 His Holiness outlined the humanitarian projects carried out, particularly in remote and impoverished parts of the world.

“We seek to feed the hungry and to aid those mired in poverty. We seek to provide inexpensive, and wherever possible free medical treatment to people who would otherwise have little or no access to healthcare. Thus, we have built many hospitals and established medical camps and clinics in Africa and other disadvantaged parts of the world.”

In addition to these initiatives, Hazrat Mirza Masroor Ahmad mentioned various educational and sustainability projects established by the Ahmadiyya Muslim Community and spoke of his own personal experiences as well. 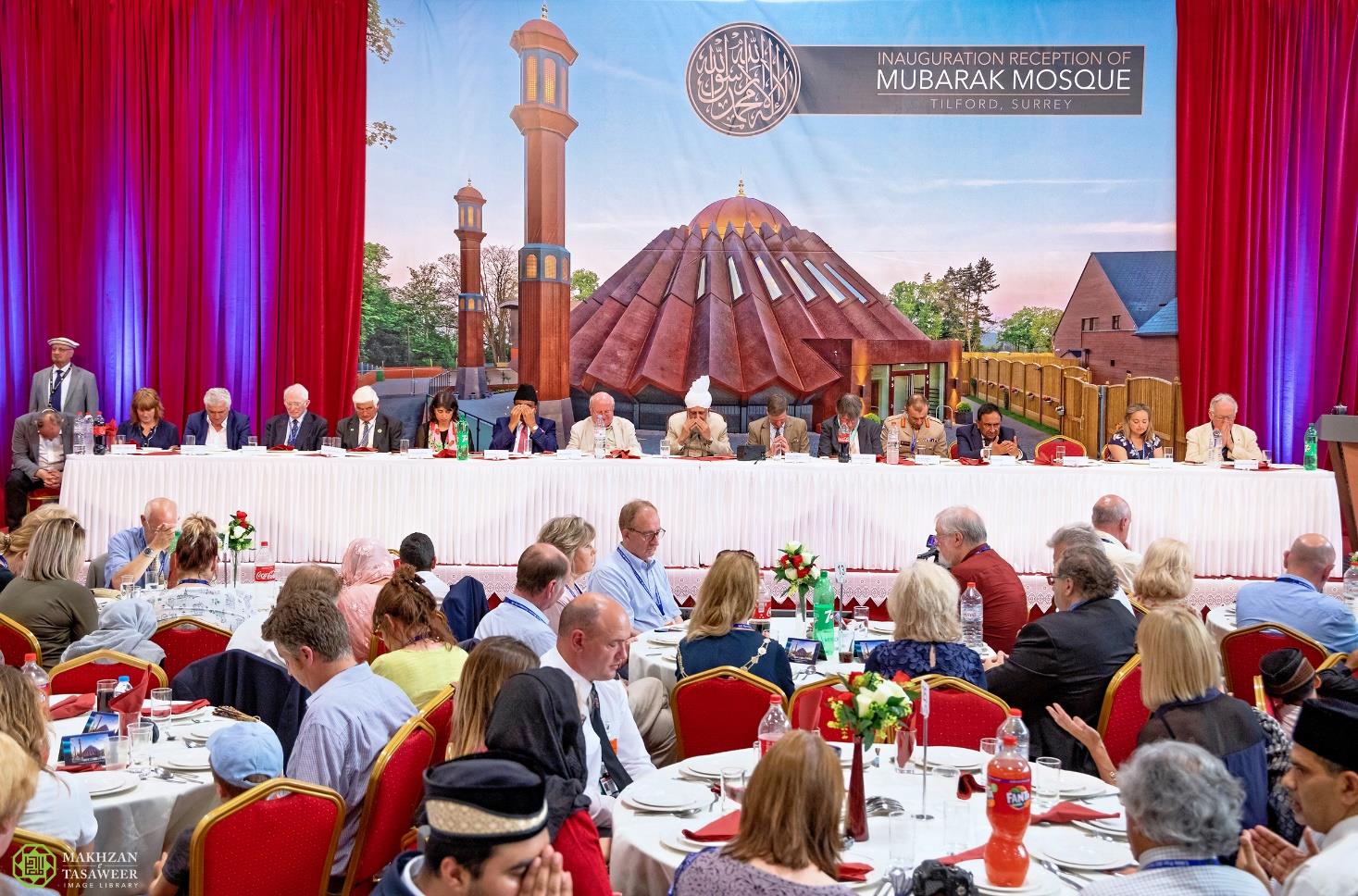 “I have personally lived in Africa and so I have witnessed the intense levels of poverty and destitution of the local people first hand. I have seen school-aged children walking for miles on a daily basis with large vessels rested on their heads in search of water for their family use.”

“Given the abject poverty they face and their desperate living standards, you cannot imagine the joy and excitement on the faces of those children and their families when we install pumps that provide them with clean and safe water from which they can drink and utilise for their domestic needs. You cannot imagine their sheer delight when they see water flowing from a tap at their doorsteps for the very first time.”

Hazrat Mirza Masroor Ahmad also made it unequivocally clear, that the humanitarian efforts of the Ahmadiyya Muslims Community are fuelled solely by compassion and sincere love for humanity and desire no praise, reward or recompense in return.

“All of the humanitarian and relief services rendered by our Community are provided irrespective of religion or belief. It makes no difference if the people are Muslims, Christians, Hindus, Sikhs, Atheists or of any other faith or belief.  Our only aspiration and motivation is to eradicate the suffering of innocent and defenceless people and to enable them to live their lives with dignity.”

“We seek no praise for this and nor do we restrict our assistance to certain people or groups. Thus, let it be clear that all of our efforts are rendered irrespective of caste, creed or colour. This is our mission. This is who we are. This is Islam.”

“Certainly, we have no desire to live an isolated existence, rather we desire to integrate and to be responsible citizens who serve and benefit the local community. Indeed, this is what I believe to be the definition of true integration – to be entirely loyal to your country of residence, to uphold the laws of the land, to serve your local community and to use whatever skills or capabilities you have for the betterment of your nation.” 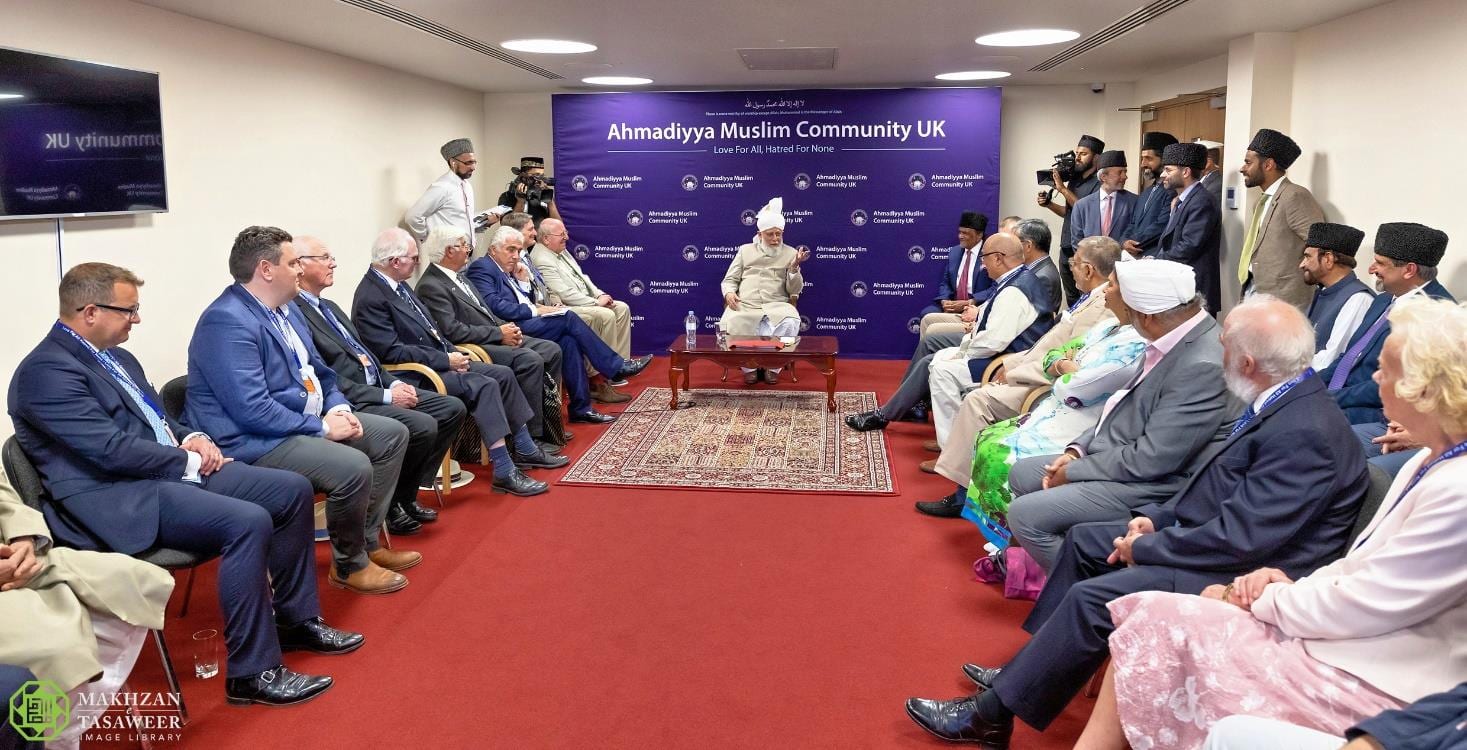 “I am certain that you will come to see with your own eyes that this Mosque and Centre proves to be a glorious symbol of peace and service to mankind.  It will prove a beacon of light illuminating the skies above with a spirit of love, mutual respect and compassion.”

Prior to the keynote address delivered by Hazrat Mirza Masroor Ahmad, the attendees heard from several speakers.

The National President of the Ahmadiyya Muslim Community UK, Rafiq Hayat delivered the welcome address and spoke about the purpose of mosques and the role they play in society:

“The mosques of the Ahmadiyya Muslim community wherever they may be play a crucial role in building cohesion and harmonious relationships with its local population. The Ahmadiyya Muslim Community continues to play its part in the promotion of interfaith harmony.”

Guest speaker, former Attorney General, Dominic Grieve MP praised and thanked Hazrat Mirza Masroor Ahmad for the work of the Ahmadiyya Muslim Community and for its efforts towards social harmony:

“The particular work, that you yourself have done, and indeed the community has done, the interfaith work and in trying to reduce extremism in all its forms is something which is much appreciated and which we all know the world we all live in so badly needs if human beings are to flourish.”

“I hope that this place continues to radiate that love of humanity which is at the absolute core of the practice of Islam.”

“It gives me a real pleasure Your Holiness to welcome you to Tilford and to have had an opportunity this afternoon to have a look around this fantastic site you have developed here, and especially the mosque. I think there are seldom occasions when you look at a building and it actually takes your breath away. But for me, the new mosque does and I think everyone should be congratulated on such a great achievement.” 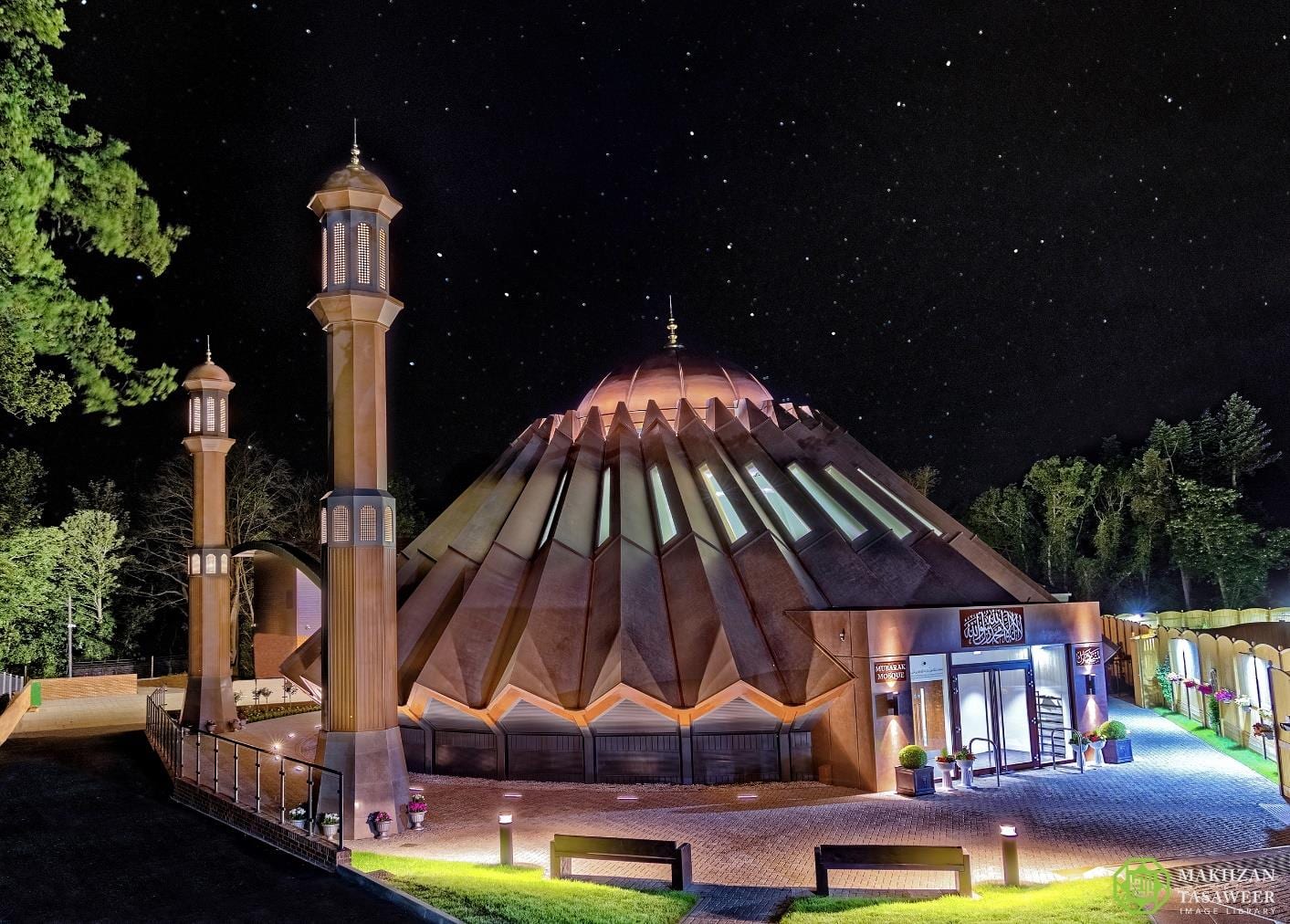 Both prior to and following the event, His Holiness met with various dignitaries and personally met with all of the guests of the event.