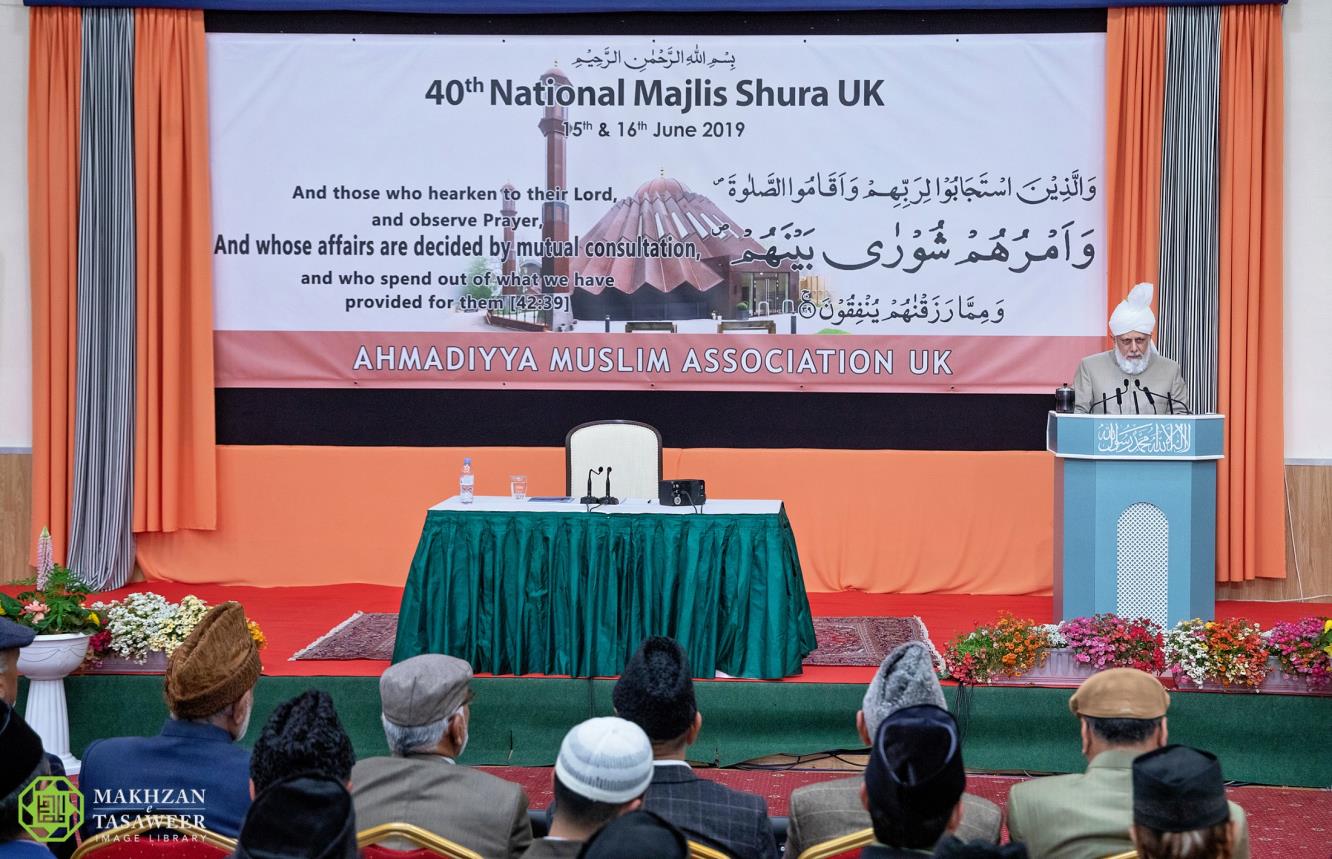 “We are a united community who stand together at all times, in all circumstances, at the hand of Khalifatul Masih” – Hazrat Mirza Masroor Ahmad

After arriving at the premises of the Baitul Futuh Mosque in London, His Holiness addressed the two-day gathering. He emphasised the importance of righteousness and keeping the fear of God in one’s heart at all times.

His Holiness impressed the fact that true prosperity was not based on a person’s gift of speech.

“A person’s speech and oratory, no matter how eloquent or well-spoken they may be, would not prove to be their means of success in this life or the next. Rather the key to success and victory in this life and in the Hereafter is to proclaim that ‘Our Lord is Allah’ – and to live one’s life according to this paramount principle.” 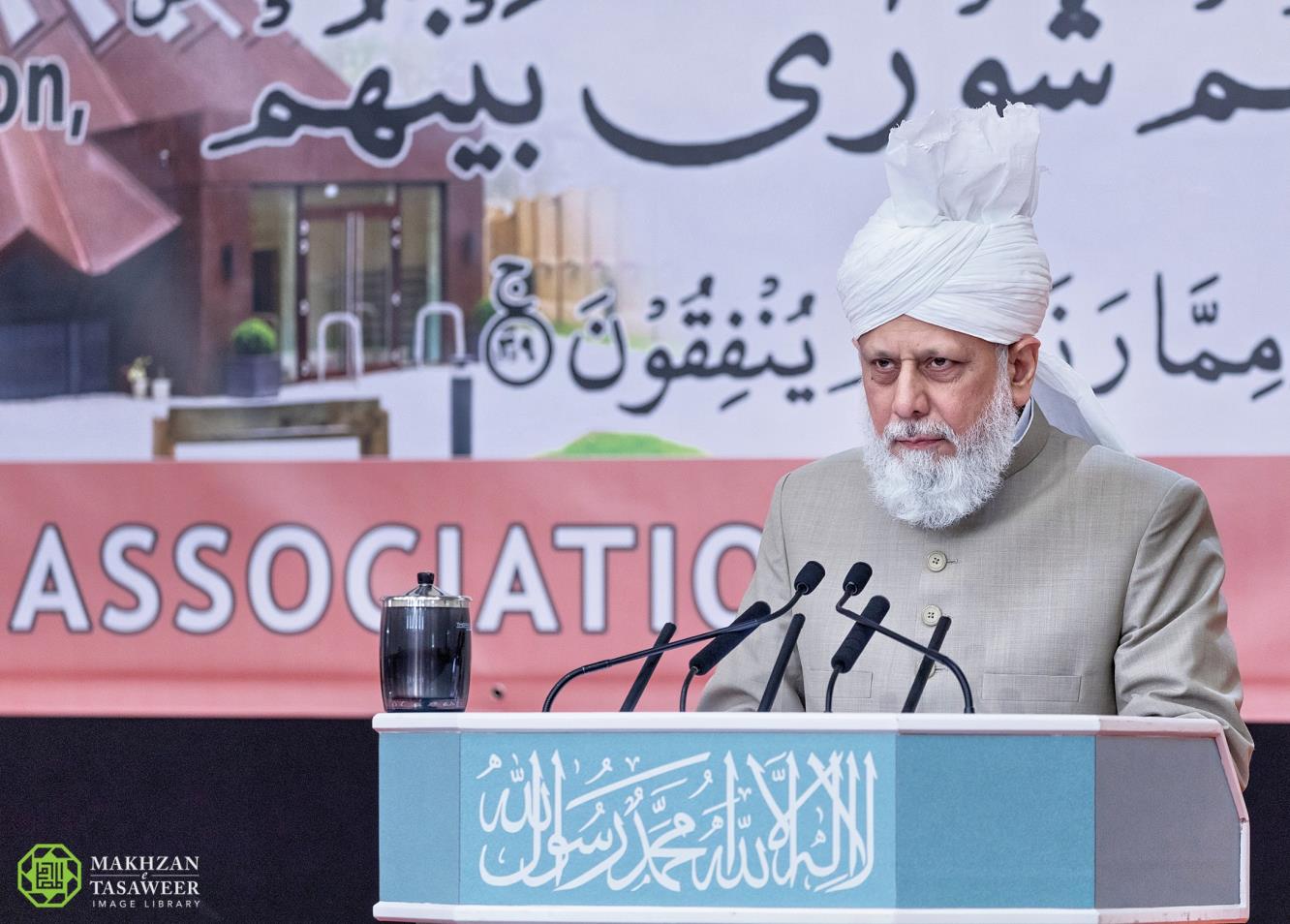 Hazrat Mirza Masroor Ahmad reminded the delegates that the real worth and value of an individual is measured by one’s relationship with God and that Divine assistance is the key to the Ahmadiyya Muslim Community’s success.

“Indeed, if you look at the numbers of the Ahmadiyya Muslim Community in purely material terms it can be said that our status is not even that of an insect or a speck of dust.”

However, Hazrat Mirza Masroor Ahmad reiterated the reality that the Ahmadiyya Muslim Community is unique and distinctive as it has the honour of having accepted the Promised Messiah (peace be upon him).

“There is one thing that sets us apart and in which we can take great pride and that is that we have heard the cry of the Caller of this era and upon hearing it we have proclaimed that ‘we listen and we obey’ and have entered his blessed fold. This is our foundation. This is our identity. This is our true value.” 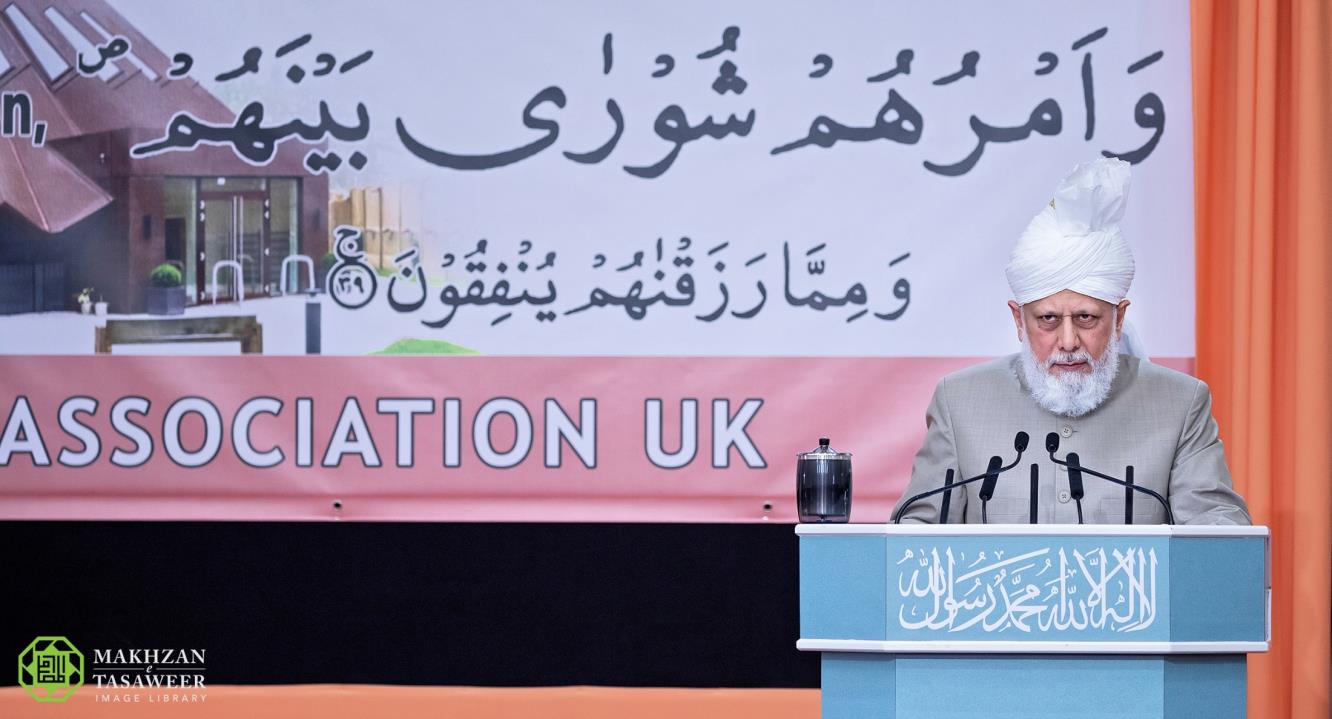 Hazrat Mirza Masroor Ahmad emphasized the need for the delegates to focus on the pivotal characteristic of righteousness in all circumstances.

His Holiness also drew the attention of the delegates towards the Divine gift of Khilafat, through which the Community remains united at one hand.

“Certainly, if in the world today others respect us and perceive our true significance it is only due to the fact that they can see that we are a united community who stand together at all times, in all circumstances, at the hand of Khalifatul Masih.”

“They appreciate the fact that we are the ones who are earnestly striving to spread the true teachings of Islam, which are of peace, love and humanity, across the world.”

Hazrat Mirza Masroor Ahmad placed great importance on maintaining sincerity and removing the pursuit of self-interests when deliberating and deciding upon matters within the Shura.

“At all times, be determined and ready to sacrifice your time, wealth and life for the cause of Islam and ensure that there is not even a trace of personal interest or ego clouding any of your decisions or intentions. You should never be motivated by a desire to attain the praise of others.”

Continuing on the theme of fearing God and righteousness, His Holiness also explained that this must act as an overarching principal in all matters, including in the making of the Community’s annual budget.

Explaining this to the delegates, Hazrat Mirza Masroor Ahmad said:

“Above all else, when preparing a budget or allocating resources it is necessary that the fear of Allah remains at the front and centre of one’s mind. If proposals are made in a God-fearing way and funding is allocated in accordance with the instructions of the Caliph of the Ahmadiyya Muslim Community then our Community’s limited resources will surely be blessed manifold by Allah the Almighty. This is what our history has always shown and the same remains the case today.”

Elaborating upon the avenues that the budget of the Ahmadiyya Muslim Community should seek to provide for, Hazrat Mirza Masroor Ahmad said:

“Our opponents are taking all possible measures in order to impede the progress of the Ahmadiyya Muslim Community. In Muslim countries, on a daily basis schemes are being hatched and immense efforts are being made to frustrate the Ahmadiyya Muslim Community’s growth. Yet in spite of their cruel and unjust endeavours, Allah the Almighty is granting us continued success.”

In his address, His Holiness highlighted the importance of Shura delegates maintaining the highest example of morals and acting as role models and a source of inspiration to other members of the Community.

Hazrat Mirza Masroor Ahmad concluded his address to the 2019 Majlis-e-Shura with the following prayer:

“It is my sincere hope and prayer that the fear of Allah remains firmly ingrained in your hearts and that you take all of your responsibilities very seriously and devotedly strive to fulfil your obligations as members of Majlis-e-Shura. May Allah the Almighty grant you the ability to do so. Ameen.” 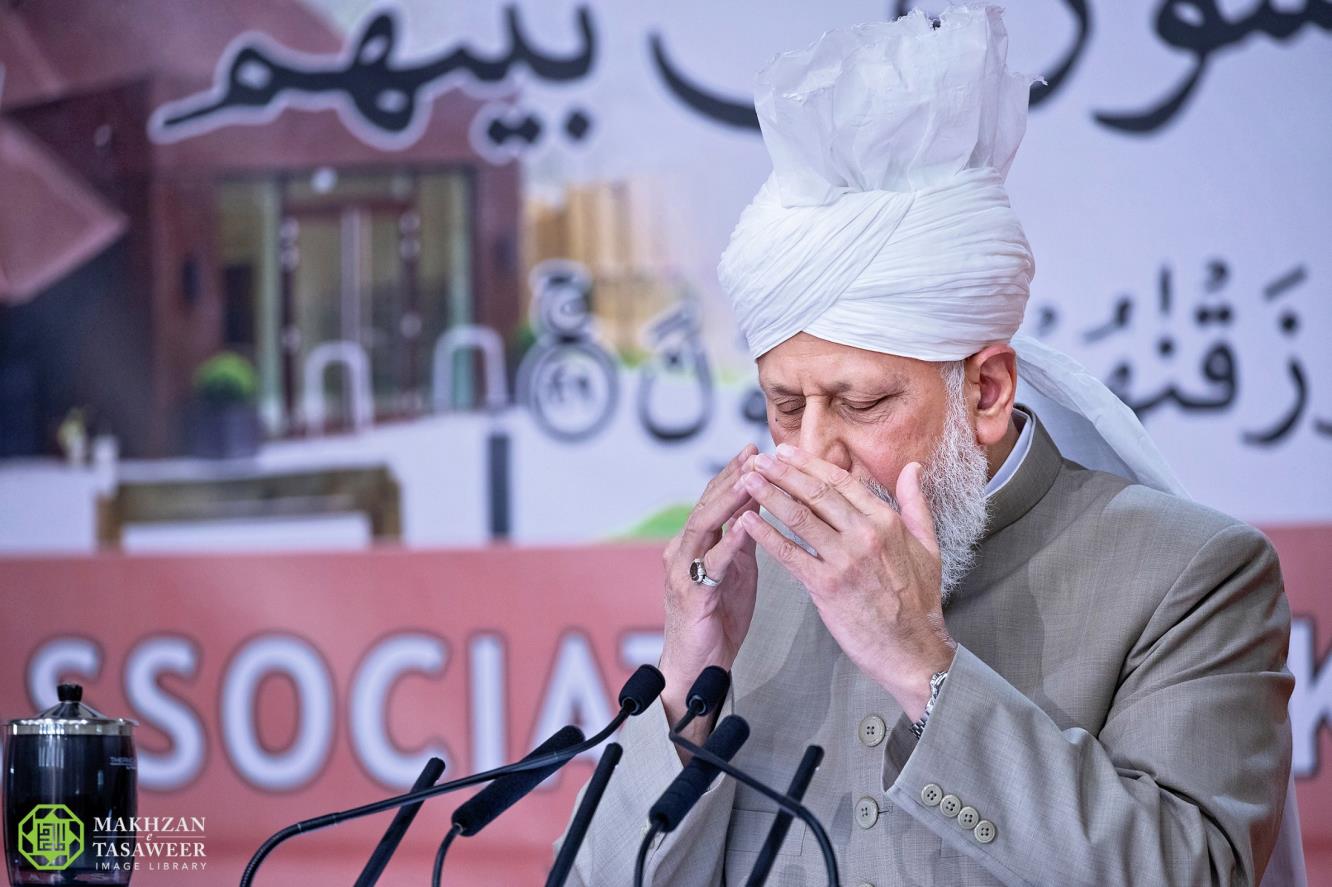